You have to sit for a “passport photo” before entering Dialogue with Time, the new multimedia educational exhibition on aging at the Israel Children’s Museum in Holon. Later, the picture will be projected onto a large screen, and doctored to show how you might look in 30 years.

That’s just one of the surprises awaiting visitors to the museum, whose designers spent six years imagining ways to educate and entertain while encouraging discussion facilitated by guides aged 70 and over.

Opened in August, Dialogue with Time has already gotten teens thinking and talking about the golden years. Gil Omer, director general of the museum, tells ISRAEL21c that one group of youngsters ran after their guide at the end of the 90-minute tour, persuading him to talk for another 45 minutes. “When is the last time you ever saw teenagers pursuing an older person when it wasn’t in a violent context?” he asks with a smile.

Omer does not find it strange to mount an exhibition about senior citizens’ issues on the campus of a children’s museum. After all, it already houses two immensely popular exhibitions allowing visitors to feel what it’s like to be deaf or blind.

“As a proud Israeli institution, we see it as part of our mandate to highlight perspectives of segments of human society that are all too often overlooked,” Omer says. “We firmly believe that as a museum, our role is not simply to inform our guests but also to advocate for a better and more compassionate world.”

A mile in their moccasins

You may have witnessed an elder trying to send an SMS or put a key in a lock with shaky hands, but the exhibit’s simulators let you try it for yourself. Impatient at Grandpa’s slow stair-climbing? Strap on a pair of weighted booties and give it a whirl – then you’ll know what it’s like to walk in his shoes. 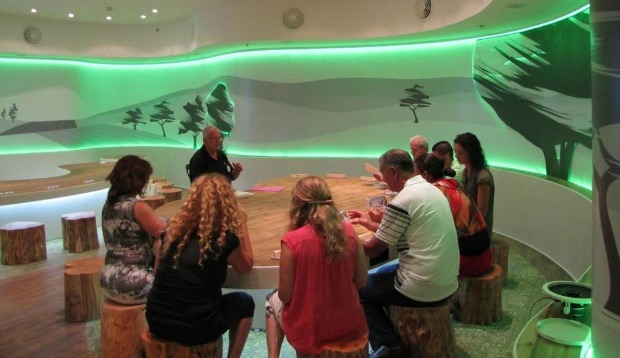 Visitors to the exhibition.

However, most of the exhibit is dedicated to activities intended to trigger group discussions about societal perceptions on aging. That’s where the guides take a starring role.

Our recent tour was led in English by 73-year-old Emanuel Dudai, a retired Tel Aviv-born journalist, military man and tour guide. Dudai gave a short illustrated overview of his life and pointed out that the Hebrew word for elder, zahken, means “wise man” rather than “old man.”

At one station, he divided our group of eight into two teams to play a multimedia trivia game on aging. Randomly, he’d turn to certain players and say, “I don’t need you anymore. Go sit down.” At the end, he revealed that the competition was just a ruse to simulate forced retirement.

“I wanted you to see how it is to retire in the middle of life when you know so much and you’re so proficient. I was showing you that people retire not always because they’re fed up or don’t want to work anymore but just because somebody said they had to,” says Dudai, who recalls being told to “go home” from his military post at age 50. 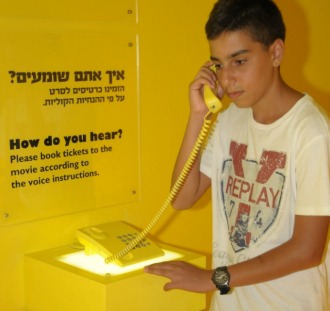 How is hearing affected by aging?

But does that mean a 70-year-old pilot is still fit to fly a commercial jetliner? The group votes electronically on expectations of job performance at different ages, and discusses the results afterward.

In another exercise, we each received a stack of photos and chose the one that best depicted how we want to look in 30 years. Participants generally picked pictures of older couples walking hand in hand or having fun. Then we chose one that best illustrated how society views the elderly. Most of us turned up pictures depicting loneliness or ill health.

Three peas in a pod

If you’ve been to the Dialogue in the Dark (blind) or Invitation to Silence (deaf) exhibitions in the Children’s Museum complex, you already know that the Holon institution has taken the experiential approach to new heights. In fact, Omer says there is nothing quite like this exhibition trilogy anywhere in the world.

The first two exhibitions, meant to be temporary, became so popular that they are now permanent fixtures even though they’re not exclusively for kids. You have to be at least nine years old to enter the blind and deaf exhibitions, and at least 12 years old to get into Dialogue with Time, although the staff is pondering a change to 14.

Dr. Andreas Heineke and Dr. Orna Cohen conceptualized Dialogue with Time, working with head designer Golan Levy and his team. They’re the geniuses behind Dialogue in the Dark, which has drawn 650,000 visitors in eight years, and Invitation to Silence, visited by 200,000 people in the past five years. Dialogue in the Dark, Omer says, is Israel’s largest employer of blind adults. 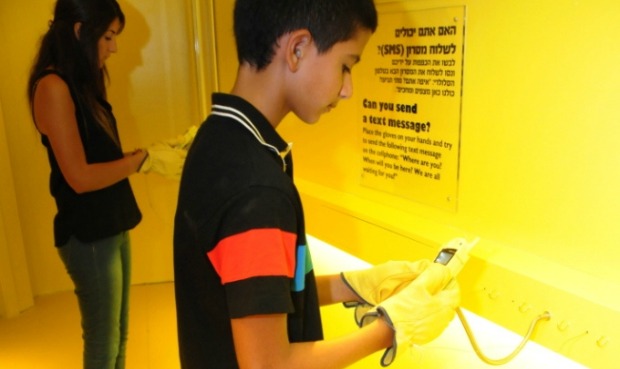 Hadar Shiron, educational director of the museum, reveals that a fourth exhibition is planned for a few years down the road, but she cannot yet reveal the topic. She did tell ISRAEL21c that there are many subjects she’d like to develop into exhibitions, such as the immigration experience and the minority experience.

Meanwhile, Dialogue with Time has opened at a time when Israel’s 65-and-over population is expected to increase 44 percent in the next seven years as life expectancy has increased 11%. Despite misperceptions, only 15% of Israel’s elderly need help with daily living.

Made possible by Israel’s Ministry for Senior Citizens, MEITAV-The Organization for Welfare and Support Services, the Joint Distribution Committee-ESHEL, Keren L’Yedidut and Keren Nadav, Dialogue with Time may prove just as popular as its older siblings in fostering empathy and smashing stereotypes.