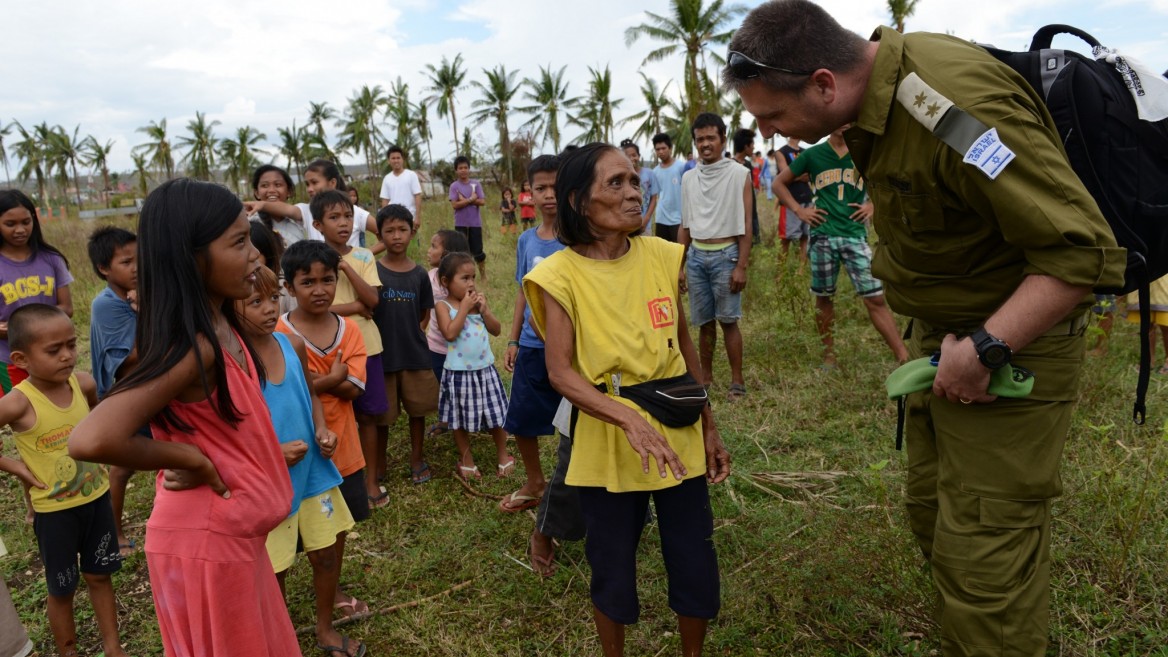 The IDF giving aid in the Philippines in the wake of the Typhoon. Photo courtesy of IDF

In the wake of Typhoon Haiyan’s devastation, IsraAID, the Israel Forum for International Humanitarian Aid, has sent an aid team to the Philippines to provide critical health interventions in the hardest-hit areas. The Israeli team will help local NGOs and UN agencies in treating hundreds of thousands of people affected by one of the worst storms on record.

Typhoon Haiyan’s violent winds barreled through several central islands, knocking out power, tumbling buildings and burying people under tons of debris. Reports say some 10,000 people are believed to have died in Friday’s devastation.

“We have a team that is leaving today,” Shachar Zahavi, head of IsraAID tells ISRAEL21c on Sunday morning in Israel. “About five or six people are leaving tonight. They are flying tonight and landing in Manila and from there they will go straight to the field. Note that it’s an IsraAID-FIRST mission.
“The team will be made up of paramedics and the minute they land there we will start working to get a better understanding of how things will look. From there we will add more professionals and people specializing in child safety and trauma experts.”

The Israeli government also offered medical help to Philippines authorities — which was graciously accepted — and the Ministry of Foreign Affairs is presently making arrangements for a transfer to the affected areas, a Foreign Ministry spokesperson tells ISRAEL21c.

A team of six first responders from the Ministry of Foreign Affairs and the IDF are also headed out Sunday night from Jerusalem to Manila. The two government officials and four Home Front Command officers “will meet with Philippine authorities and see what they need and how to get it there logistically,” a spokesperson tells ISRAEL21c. “This will help us understand what we need to send over, when to send it, and how to send it.”

Prime Minister Benjamin Netanyahu sent a letter to Philippine President Benigno Aquino: “On behalf of the government and people of Israel, I extend heartfelt condolences to the families of those who lost their lives as a result of the horrific typhoon, and I send best wishes for a speedy recovery to those who were injured.

“I hope that Israel’s assistance will help alleviate the suffering of those affected by this terrible disaster. Our thoughts and prayers are with you and the Filipino people at this difficult time.”
Israeli Ambassador to the Philippines Menashe Bar On extended sympathies to residents of the area and said Israel is one with Filipinos “in these trying times.”
In the 2009 typhoons in the Philippines, Israeli aid workers provided medical relief to thousands of people there. IsraAID set up a number of field hospitals in the storm-battered country four years ago. Zahavi said that’s the plan this time around as well.

“Setting up a field hospital – that’s our goal. That’s what we are trying to aim for,” he says. “You have to understand that it is relatively hard to get in there. It’s not easy so this is really our first mission. We have been working with our local contacts to secure private flights into [the disaster zone]. Eventually we would like to scale up and to see how feasible it will be to build a field hospital. We are working closely with the ministries there. In 24 hours we will know more and will be standing. Our team will arrive to their destination around noon Israel time [Monday].”

Israeli relief workers have facilitated aid programs all over the world. Since IsraAID’s creation in 2001, it has provided relief to cyclone victims in Myanmar, long term aid programs for starving communities in Malawi, rehabilitation and relief in South East Asia following the devastating tsunami, as well as countless other rescue missions. IsraAID and its coalition members have been active in over 40 countries.

Karin Kloosterman contributed to this report.