More device than phone, the First Else is an all-Israeli challenge to the iPhone that promises to change the cell phone game and even potentially shift its center to Israel. 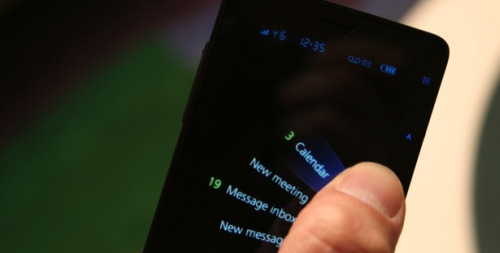 Designed from the ground up, the First Else could be a ‘game-changer’ in the world of cell devices.

In the 1990s the center of the cell phone world was in Finland, home of Nokia. Then the action moved to California, where Apple’s iPhone set the standard for the new generation of smartphones. And now the center may shift to Israel, because Else, a subsidiary of Israeli company Emblaze, has developed one of the most innovative cell phone devices to hit the market in a long time.

Meet the First Else, described by Else CEO Amir Kupervas as a “game changer” in the world of cell devices. The First Else outsmarts any existing smartphone (including the iPhone and various Android offerings) and will be available in the US and Europe by mid 2010.

Kupervas tells ISRAEL21c that the First Else is more device than phone. “Our approach to this device is to ensure that it provides users with the experience they want, depending on what they use it for,” he says. “If users want to take a picture with the device, we want to make sure it functions as a high-level camera, similar to a digital camera. If the users want to watch video, the First Else will enable them to watch video with the highest quality graphics possible.”

As a result, the First Else sports an impressive array of hardware features, including near high-definition video and a battery that lasts at least 50 percent longer than those used in many cell devices.

Early adopters rave over it

Moving beyond hardware, while it makes and receives calls and allows users to send and receive SMS messages, the First Else is about providing a top-flight user experience – and that, Kupervas says, is primarily what the company’s designers were working on for five years. The First Else was designed from the ground up, with Emblaze leveraging the experience and contacts the company has built up in more than a decade in the cell phone business to include the best of everything.

Some of the First Else’s game changing features are its patented “sPlay” interface, which facilitates control of just about every function on the phone with just your thumb. This includes back-end data integration, which connects all the diverse data on your device and presents it at the appropriate time – so when a friend calls, you get all the relevant information about the person, such as voice and SMS messages, calendar entries, even the photos where you’ve tagged him or her.

Other features include integration of all functions and features to interact with your data, like the always-on GPS that automatically geotaggs the photos you take with location and date; and an out-of-the-box subscription to a music store with four million downloads that you don’t even have to sign up for, because all the “technical stuff” is taken care of by your service provider. You just download and listen.

Forget iPhones or Android devices, says Kupervas; even the most advanced devices currently on the market are no match for First Else’s user interface. “When you have hundreds of apps on your iPhone, using it becomes unmanageable,” he says. “And most of the Android devices look and act the same.”

The First Else, Kupervas claims, is very different and certainly early adopters who have participated in usability tests and consumer test panels are raving over it. In fact, the device exists right now and is almost ready for market. Else/Emblaze are working on the marketing campaign to introduce it in the coming months.

Born and bred in Israel, where it intends to stay

The First Else was born and bred in Israel, and is growing up there, as well. Most of the operating system (based on a derivative of Linux) and the user interface were developed in-house by Else/Emblaze engineers, but many of the applications – such as the music player, video technology, etc. – were developed by 30 different companies Else has partnered with, many of them Israeli startups.

“We prefer working with Israeli companies wherever possible,” says Kupervas. And by doing so, Else is seeding what could be the makings of an Israeli center for the worldwide cell phone industry.

Israeli startups in the cell phone business are known for their major contributions to products made by multinational companies. For example, key components of Motorola’s cell phone technology were developed in the company’s Israel-based research labs. But Else is not developing its device for anyone else – instead, it intends to see the product through, proudly proclaiming it an Israeli product.

In fact, says Kupervas, the company is so committed to the future of the First Else that even though it plans to publish a development platform for third parties to build applications for the device, it intends to keep a wary eye on those applications, ensuring that they retain the high standards Else has set.

“There may be fewer apps on our platform, but they’ll be better and more usable than the apps available for other platforms,” Kupervas asserts. And by keeping its standards high and chiefly working with Israeli companies, Else could be laying the groundwork for a major industry that could create thousands of new jobs in Israel, while placing the sleekest, most functional cell device in the hands of millions of people around the world.