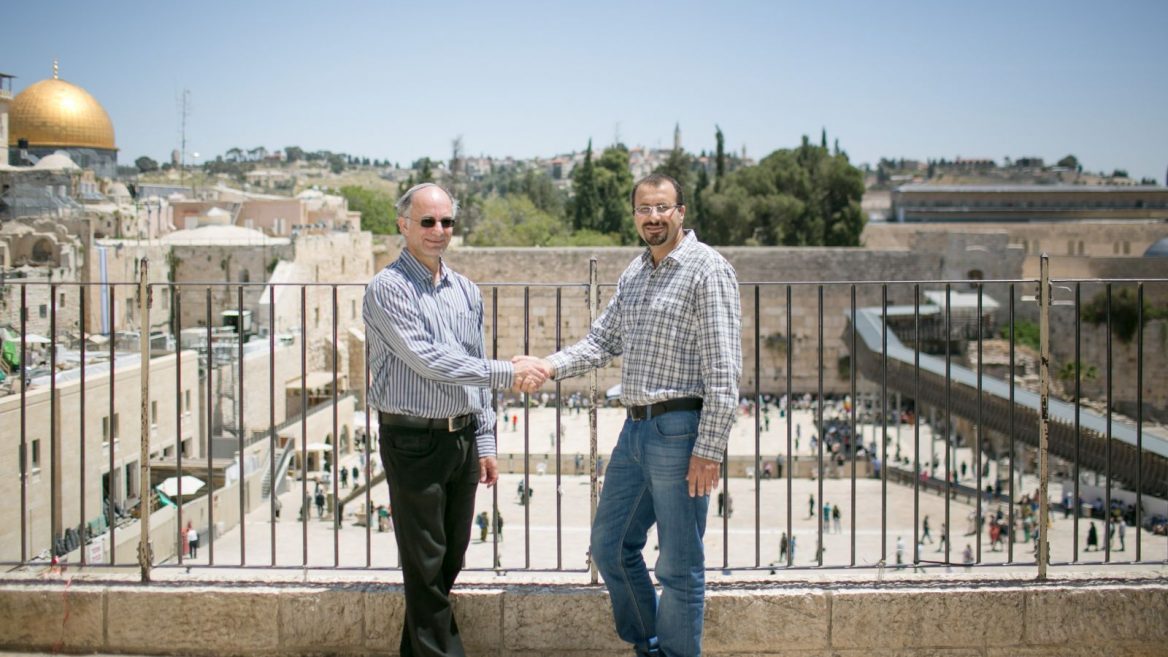 Last July, as the conflict between Israel and Hamas in Gaza raged, dozens of Jews, Muslims and Christian met for dinner to jointly break the Muslim Ramadan fast and the Jewish fast of the 17th of Tammuz.

In September, 25 Christians, Jews and Muslims went hiking together up north. In February, four teenagers from Hebron traveled past the checkpoint into Jerusalem to meet three Jewish peers in a hummus restaurant to talk about Muslim and Jewish holiday customs.

Meetings like these happen quietly across Israel on a monthly basis, sponsored by the Interfaith Encounter Association (IEA). The group’s founder, Yehuda Stolov, and assistant director, Salah Alladin, were this year’s winner of the $10,000 Institute of International Education (IIE) Victor J. Goldberg Prize for Peace in the Middle East.

“We’ve established 71 ongoing interfaith groups from the Upper Galilee to Eilat, about half of them active,” Stolov tells ISRAEL21c. “Maybe the most novel thing is an ongoing dialogue between West Bank settlers and Palestinians. Altogether, we touch more than 10,000 people. Five or six research studies all concluded that these conversations are effective in changing the attitudes of participants, most of whom have never had other experiences like this.”

It was his own attitude change that spurred Stolov to start IEA in 2001. For several years he had participated in a Jerusalem encounter group between Jews and Christian theology students.

“At first it was intellectual fun, but after a while I realized my own prejudices toward Christianity and Christians were changing,” says Stolov, 54, who has a PhD in physics and Jewish thought. “This type of conversation has transforming power.”

Launched around the same time as the second intifada — the five-year Arab uprising that resulted in 1,137 Israeli deaths — IEA’s platform for building peace between communities does not include any political plank.

“We realized building peace in the holy land has to be first a grassroots process, because we live side by side and have no option of having no interaction,” says Stolov. “As long as we don’t learn how to interact positively, we interact negatively. When the process is advanced enough, it will be possible to think about political models. Right now all are equally unrealistic but they’ll be equally realistic if we succeed.”

“At first it was intellectual fun, but after a while I realized my own prejudices toward Christianity and Christians were changing. This type of conversation has transforming power.”

Each group has a coordinator to provide “soft” facilitation. Participants speak in English, Hebrew or Arabic about topics such as prayer, non-violence, health, language study and coexistence.

Alladin, an Arab citizen of Jerusalem, came on board as the Jerusalem Young Adult group coordinator in 2002. “He became more and more involved, and around nine years ago, I suggested that he become assistant director,” says Stolov. Now in his 30s, Alladin works as an accountant but consults with Stolov every day on the direction of the IEA.

Victor Goldberg is a longtime trustee of the IIE, an independent nonprofit founded in 1919 to forward the international exchange of people and ideas toward achieving lasting peace. The organization has 1,000 member institutions and administers the US government’s Fulbright Student Scholar Program among other initiatives.

A retired corporate vice president of IBM, Goldberg instituted his prize with an endowment in 2005. He explains to ISRAEL21c that a selection committee decides on prize recipients.

“The first year we weren’t sure we’d have any eligible winners, but each year we’ve had terrific applicants. That’s pretty exciting,” he says.

In his speech at the award ceremony on June 22 in Jerusalem, Goldberg said that the grassroots work of IEA contributes directly to peace, “because real peace is more than a political deal. It is also a state of mind in which one must work to transcend the injustices of the past and the personal realities of the present. To understand the basic humanity which we all share. It is a multi-generational effort, and it will require courage, effort and time to manifest itself in people’s hearts. And it must start and end with getting to know each other as human beings.”

In 2013, the Goldberg Prize went to Eli Beer and Murad Alyan of United Hatzalah. Among the past winners are Amal Elsana Alh’jooj and Vivian Silver, co-executive directors of the Negev Institute for Strategies of Peace and Development.

“We hope the award attracts attention and gets our message across to a much larger audience,” says Stolov. “The main thing we struggle with is not resistance but that most people have never heard of us. We’d like to have others join us.”