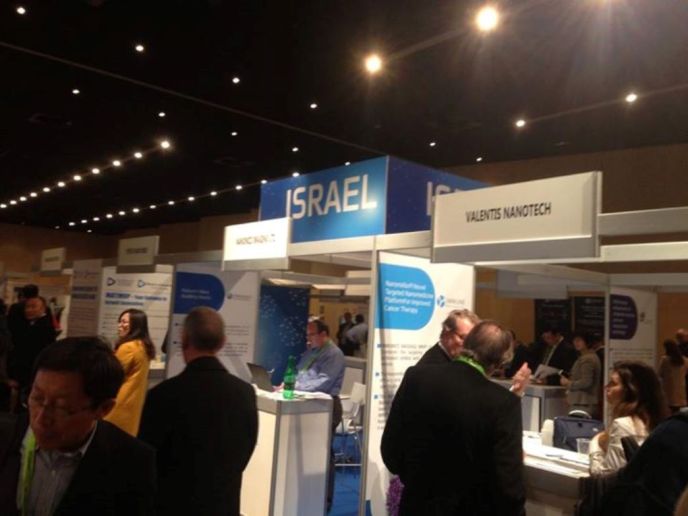 Tiny but powerfully influential in myriad ways: That could describe Israel itself, but it also describes the nanotechnology advances made by Israeli academia and industry.

And that was the message that 1,000 attendees of Imaginenano 2015 – Europe’s largest nanotechnology conference – received loud and clear from 10 Israeli companies and their products showcased recently in Bilbao, Spain.

Two of those companies, Melodea and Valentis, are using cellulose nanocrystals (CNC) — a strong, inexpensive, biodegradable, transparent gel extracted from plant pulp –to make a variety of groundbreaking products out of a formerly unusable natural material.

Melodea pioneered an economically viable industrial process to extract CNC from industrial paper sludge and other plant-based processes, using it to form eco-friendly foams and materials to strengthen and improve bio-packaging, paper, acrylic glues and paints.

Wood pulp from paper production alone accounts for 11 million tons of waste each year in Europe, so it was a happy discovery that these fibers are a perfect source for CNC. However, the nanomaterial can be extracted from any kind of plant.

Melodea was spun out of the lab of award-winning Hebrew University Prof. Oded Shoseyov – founder of companies including CollPlant for making human collagen and the Paulee Cleantec pooper-scooper that turns dog waste into harmless powder. He cofounded Melodea with his former PhD student, Shaul Lapidot, from the university’s Faculty of Agriculture, Food and Environment in Rehovot.

Lapidot tells ISRAEL21c that the material now called CNC was first described in 1949 by a Swedish professor, before the term “nano” was invented. But not until the 1990s did scientists have the tools to extract and make something from this plant cell-wall  material. Only in the last six or seven years did it become practical to think about commercial applications.

“We started with a patent for extracting CNC from pulp waste but also from any plant material such as flax and hemp,” Lapidot says. “We have contacts with more than 40 companies worldwide, because CNC is expected to be produced in the thousands of tons within another decade.”

For now, Melodea is concentrating on an additive for glues and paints to give them better texture and strength; structural material such as foams; and coatings for improved, greener packaging. A pilot production facility in Europe is expected to be completed later this year, funded by three European Community grants. The nine-employee company in Rehovot is now seeking investors and strategic partners.

The other company, Valentis Nanotech, is developing an industrial process to infuse CNC with properties to be used as advanced polymeric UV-blocking transparent films for food packaging, as well as for agricultural sheeting and for products in defense, transportation and other industries.

Incorporating different types of nanoparticles into Valentis Nanotech’s composites adds specific functionality that can be tailored to the particular application, according to CEO Dov Segev.

The first Valentis product is a coating for food packaging that is thinner and stronger than currently available coatings. It has high-barrier properties to block UV rays, oxygen and moisture, so that food remains fresh and has a longer shelf life.

Valentis was founded in 2013 and operates within Trendlines Agtech, part of The Trendlines Group.In July last year, Valentis signed a memorandum of understanding with one of Israel’s leading agricultural thermoplastics applications companies to collaborate on new product development.

Other nanotech companies to watch

Israel’s national booth at Imaginenano 2015, hosted by the Office of the Chief Scientist in the Israel Ministry of Economy and its executive branch, MATIMOP, also featured these cutting-edge companies:

Fulcrum SP Materials, another company cofounded by Shoseyov, claims to be the only company in the world that can bind nanoparticles to composite materials — such as carbon fiber, aramid and glass fiber — using a proprietary genetically engineered protein. This technology creates stronger and lighter parts made from composite materials, at an affordable price, for aerospace, energy and automotive applications. Based in Rehovot, Fulcrum has so far raised $6 million in funding.

Nanonics Imaging, an award-winning provider of nanotech products forhigh-resolution scanning probe microscopy. The 20-year-old company, based in Jerusalem with headquarters and representatives throughout the world, supplies a wide range of nanotech applications unavailable with other measurement tools.

NanoAF develops and tests biocompatible and environmentally friendly, nontoxic materials that resist bacteria. The materials are based on short peptides that can self-assemble into a film for coating a variety of surfaces including glass, titanium, silicon oxide and metals.

Immune Pharmaceuticals recently entered into a licensing agreement with Yissum to facilitate the development of a topical nanoparticle formulation of Immune’s neuropathic pain drug, AmiKet. The drug-delivery technology was invented by Prof. Simon Benita of Hebrew University’s Institute for Drug Research. Immune Pharmaceuticals is currently conducting a search for an appropriate partner for the final development and commercialization of AmiKet. The company’s lead product candidate, bertilimumab, is in clinical development for treating moderate to severe ulcerative colitis and Crohn’s disease as well as bullous pemphigoid, an orphan auto-immune dermatological condition.

PlasanTorTech nanotube fibers and mats for military and commercial applications can be combined with other materials such as carbon fiber, glass and ceramic to provide tailored solutions for industry. In 2013, the nanotube fibers – originally innovated at Kibbutz Sasa – were used by Chevrolet to make its Corvette C7 Stingray stronger, lighter and have better handling.Its dense plastic composite product has also been used by the US military; as lightning-strike protection; in de-icing; and to provide greater conductivity, lower resistance and less heat in electrical applications and health monitoring.

For more on Israeli nanotechnology, tune into ISRAEL21c’s TLV1 radio show for a discussion with Nava Swersky Sofer, founder and co-chair of NanoIsrael; Prof. Uriel Levy, head of the Nanotechnology Institute at the Hebrew University of Jerusalem; and Prof. Uri Sivan, one of the Technion’s leading nanotechnology experts.