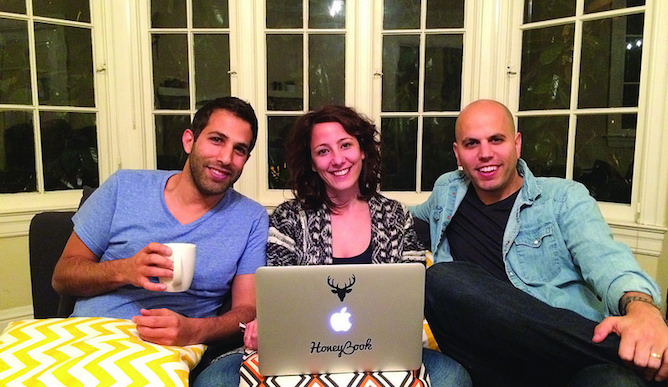 Naama Alon planned her wedding during a stressful academic year at Tel Aviv’s Shenkar College of Engineering and Design. Soon after the nuptials, but before finishing her degree in graphic design and interactive media, she and her new husband, Oz, birthed a startup that would soon make waves in the United States.

Their interactive website, HoneyBook, has a 10-strong staff in offices in Tel Aviv and Silicon Valley.

HoneyBook, derived from “honeymoon” and “booking,” is a technological hub for professional event planners and the contractors they hire — where brides-and-grooms-to-be (or other customers coordinating a multi-pronged operation) can comfortably manage all facets of their event from any web-enabled device.

The idea arose from a school project that Alon was assigned, involving the production of a radio show. She used her recent wedding as the theme of the broadcast, airing some of the audio portion of the event, such as speeches made in honor of the couple.

This, among other things, caused her to recognize her limited ability to aggregate all the material from the wedding — pictures, video footage, music and mementos –and make it accessible not only to herself, but to the guests who had attended, as well.

“Facebook just wasn’t a sufficient venue for all that,” she tells ISRAEL21c, during a recent trip from San Francisco – where the couple relocated less than a year ago — to HoneyBook’s Tel Aviv office.

Her husband, who took an active role in the wedding plans based on eight years of experience planning events for 1,000-plus people at his production company, adds that they were “struck by the huge gap in the market between existing technology and the kind of product we would have benefitted from.”

He says, “All event planners, photographers, florists, DJs, caterers and everybody else connected to a wedding – including the bride and groom – have smartphones. So the coordination process shouldn’t be so complicated and clumsy.”

On the website, he elaborates: “We found ourselves collecting and signing countless contracts, managing emails and phone calls from upwards of 15 vendors, and worst of all, writing paper checks. … More than two decades after the birth of the modern Internet and at a time where all of our vendors already owned a smartphone, we were still dealing with hard copies, checks and the dreaded Excel spreadsheet.”

HoneyBook was the couple’s way to get the wedding business up to speed technologically, from the “before” to the “after.”

The tools on the site provide a graphically aesthetic cyber-home for memorabilia, coupled with a cyber-office for booking and contracting with vendors.

So far, HoneyBook is restricted to event planners in the United States, where the market is ripe for this product. In the future, it is meant to go global.

Setting up shop abroad wasn’t part of the original plan. “It hurt us to make the move,” Naama Alon says. “On the one hand, we love Israel desperately. On the other, we knew that our $100 billion target market was not in Israel.”

HoneyBook’s investors – the accelerator UpWest Labs (a US-based program exclusively serving Israeli entrepreneurs), and venture capitalist/angel Bobby Lent – encouraged and enabled the team to build the business in America first, with the goal of expanding it to the rest of the globe.

The event-planning industry in the US is massive, and HoneyBook filled an immediate and widespread need. Many Israelis are beginning to adopt American event habits, so the founders hope that by the time HoneyBook is fully established and profitable, it will slide right into the Israeli market.

“In order to create a site that suits the needs of the US event-planning market, we had to be on the ground in the US, living and learning and meeting with people, to find out how best to accommodate them,” Alon says. “What excites me the most is the endless business opportunity and the acquired knowledge from some of the world’s most talented entrepreneurs and product innovators.”

She also emphasizes the importance of having the technological research and development operation remain in Tel Aviv.

“Israeli R&D is the best in the world,” explains Dror Shimoni, co-founder and CTO of HoneyBook, who heads the development team in Israel. “And our technology is unmatched.”

Alon’s ultimate goal is “to take that amazing technology and create a high-quality product for professionals and a user-friendly one for regular people to maneuver.”

So, while the current focus of HoneyBook is event planning, its technology eventually could be employed for any endeavor – such as home renovations — that requires coordination among many different sub-contractors.

This was an innovation that Alon did not have at her fingertips when papers and final exams made planning her own wedding a stressful experience. Her next anniversary bash, however – even alongside the couple’s grueling business schedule – ought to be a piece of cyber-cake.