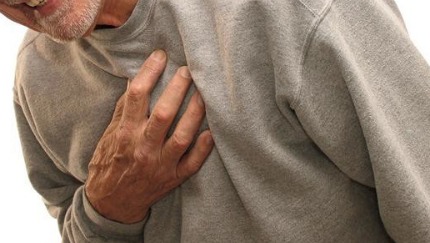 Early diagnosis of a heart attack can save lives.

With coronary heart disease today the number one killer in the US, it’s no surprise that health authorities are stressing the importance of early detection – which leads to earlier treatment, and can save lives.

While crushing pain in the chest might be easy to recognize as heart trouble, other symptoms like pain in the shoulders or arms, nausea, sweating, shortness of breath, or fatigue, are not. Now an Israeli company could have the solution.

Israeli diagnostic company Novamed has developed a new home diagnostics product, SensAheart, that can detect a heart attack – medically known as a myocardial infarction — while it is in progress, or even before it takes place.

Heart attacks don’t just happen instantly – they develop over several days, says Dr. Igal Ruvinsky, head of Novamed’s R&D department. It’s important to get treatment as soon as possible to avoid long-term damage to the heart. But many people suffer mild, or even serious, heart attacks without even realizing what is happening – and often, victims are able to continue to function through a prolonged episode even while in pain.

“Either they are unaware of the symptoms, or attribute their pain to something else. You need a quick diagnosis and quick action in these cases,” Ruvinsky tells ISRAEL21c. “Our kit lets home users determine whether they need to rush to the hospital, or whether they can rule out a heart attack as the cause of their suffering.”

Works with a single drop of blood

In order to test for a heart attack, you need blood – and one of SensAheart’s biggest advantages is that it can provide highly accurate results with just one drop of blood.

“We test for the presence of troponin, an enzyme that is released at the onset of myocardial infarction, as well as for FABP3 [heart-type fatty acid binding protein], also released when an attack ensues,” says Ruvinsky, explaining that during a heart attack the blood and urine levels of FABP rise rapidly. “So by testing for both these markers, we get a very accurate picture of the state of the heart – and whether the patient is already, or is about to, suffer an attack.”

The blood is analyzed and filtered, and a few minutes later an indicator appears on the window of the analysis kit, telling the patient whether she or he can relax or should rush to the hospital.

“There is no other similar test that can be marketed to the home user in this way, because all of them require much more blood for analysis,” says Dr. Gavriel Shalmiev, Novamed’s vice president and marketing manager. “One drop is enough, because our use of the cardiac markers that indicate a heart situation are much more sensitive. That’s part of our product’s magic.”

Novamed, which has been producing diagnostic and research tests for a variety of conditions since 1995, has the numbers to prove its effectiveness. In one study conducted at Wolfson Medical Center in Holon, the test gave accurate results for 94 percent of participants, indicating that they indeed were going to suffer a heart attack and thereby catching the problem in its initial stages.

SensAheart has been available for purchase since the beginning of the year, and Novamed has already sold thousands of units in Russia and China, where the company chose to market first. Most of the sales so far have been to institutions, but the company plans to market to home users during the coming year.

“We are planning to submit the product for [US] FDA approval at some point in the future, once it gets established elsewhere,” Shalmiev says, explaining that Novamed’s management wanted to avoid the high expense of preparing for Federal Drug Administration application at the product’s initial sales phase. “There are plenty of markets outside the US where this product will sell well.”

Novamed, located in Jerusalem, has been around for about 15 years and has 60 employees. The company sells about 100 diagnostic products, garnering annual sales of about $10 million. Though it is owned by Riverside-Europe, a worldwide private equity firm, the company is still Israeli through and through.

“We have a lot of projects going on,” says Shalmiev. “There are a lot of great developments in the pipeline, and we’re proud to be able to be doing this work in Jerusalem.”