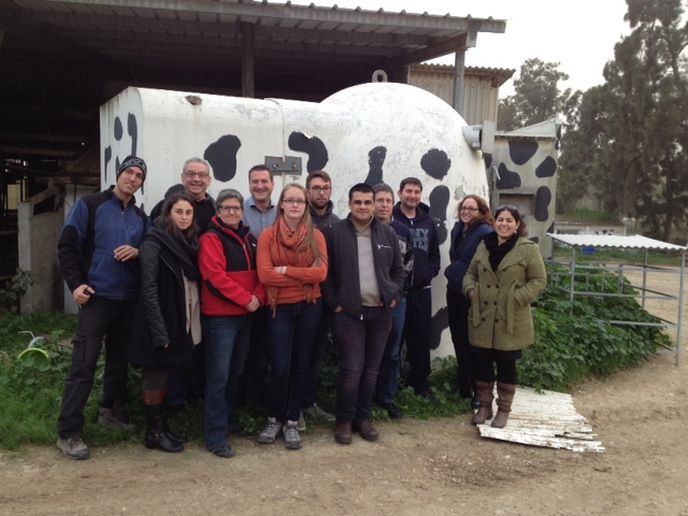 SUNY-New Paltz and Ben-Gurion University graduate students at Kibbutz Sa’ad, near the Gaza Strip, where the bomb shelter near the cowshed is painted in a cow theme.

SUNY-New Paltz and Ben-Gurion University graduate students at Kibbutz Sa’ad, near the Gaza Strip, where the bomb shelter near the cowshed is painted in a cow theme.

When a visiting New York mental-health counseling student asked residents of Gaza border communities why they stay despite the constant threat of missile attack, they answered in one word: Home.

“It struck me that they said ‘This is my home and I don’t want to leave.’ After 9/11, we saw the same thing; many people didn’t want to leave Manhattan — this place that potentially could be a target — because it’s home and they love it,” says Gillian Hammond, a second-year graduate student at SUNY-New Paltz University’s Institute for Disaster Mental Health.

Hammond and six classmates accompanied the institute’s director, Prof. James Halpern, on a 10-day January trip arranged through Ben-Gurion University (BGU) to learn about psychological first aid in Israel’s South and how Israeli coping strategies might be helpful in their work in the United States.

She tells ISRAEL21c that although Americans tend to experience disaster (such as a hurricane or school shooting) as an isolated event, whereas Gaza-area Israelis live with an undercurrent of constant stress, she noted some significant similarities.

“One of the biggest commonalities we’ve been talking about is the importance of people’s homes,” Hammond says. “We saw that a strong community gets people through and provides comfort and support  since everyone is going through the same thing.”

Halpern, who has consulted for the United Nations on assisting victims of terror, agrees that “a strong sense of social support mitigates trauma and stress as much or more than anything else,” and this is what they observed in Sderot.

He further noted that staying close to home, or even not leaving one’s house for long periods, can be “an appropriate adaptive response” to chronic exposure to trauma, and tells ISRAEL21c that this is one example of “how the Israeli experience can be informative to us” in understanding the behavior of Americans living in dangerous neighborhoods.

Halpern has come to Israel annually since 2009 as a guest lecturer for the Arab and Jewish social-work students of Prof. Richard Isralowitz, director of the Regional Alcohol and Drug Abuse Research (RADAR) Center in BGU’s department of social work.

The two internationally renowned professors realized that “a binational cooperative experience” could benefit their respective students. A memorandum of understanding, signed last October in New Palz, paved the way for Halpern to take some students with him on his next January trip to Beersheva.

According to the memorandum, “Bringing together Israeli and American graduate students engaged in disaster preparedness, response and recovery will enable both groups to gain a broader and richer understanding of different types of crises and how to provide the most effective assistance in an ever-changing world.” 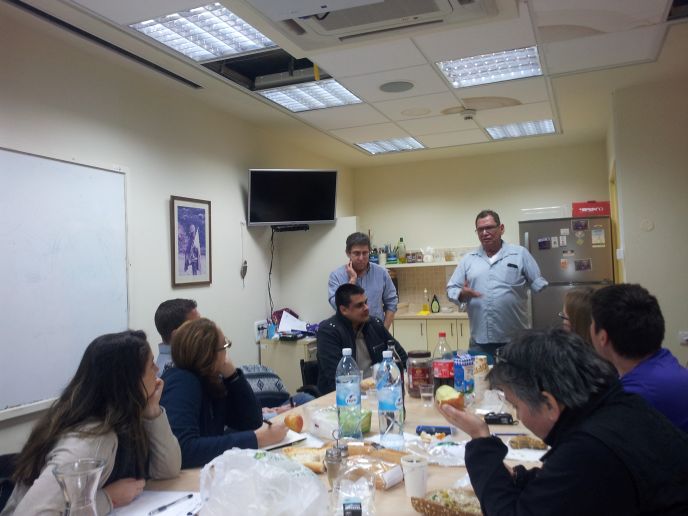 Prior to three days of classes together with 25 of Isralowitz’s students, the visitors spent two days in the Ayalim Association’s student village in the Negev town of Dimona. Ayalim builds student housing in underserved Negev and Galilee towns, providing full scholarships and discounted rent in return for 500 hours of community volunteering per academic year.

“As part of the training, the guests were able to hear firsthand about the local students’ experiences in regard to their work with trauma patients due to the missile attacks, while at the same time being exposed themselves to the missile threat, a situation referred to in the literature as ‘shared war reality,’” explains Isralowitz’s research and teaching assistant, Itay Pruginin, whose PhD research focuses on secondary trauma affecting social workers in Gaza-area communities.

Hammond says that getting to know Ayalim students in Dimona “gave us another cultural perspective” critical to their understanding of the situation. 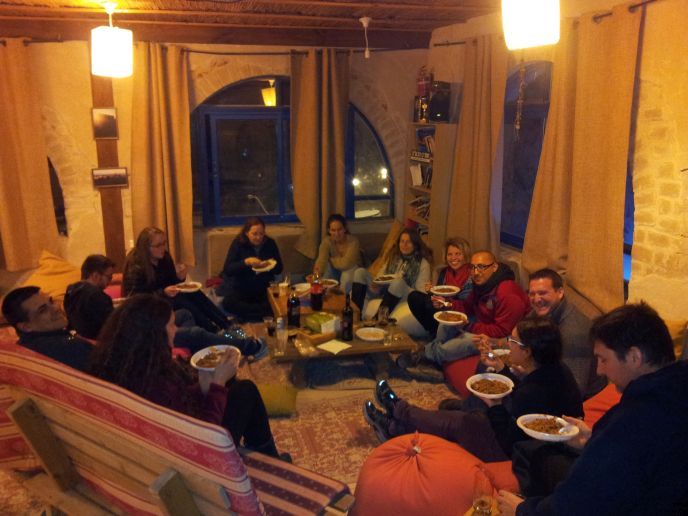 The American and Israeli students bond over stew at Ayalim in Dimona.

The first thing she noticed was the reinforced concrete pipe that serves as the students’ bomb shelter. They have 15 to 30 seconds to get inside when the air-raid siren sounds.

“They told us how during the summer, a missile [from Gaza] had hit a Bedouin village nearby and they went as a community to visit an injured family in the hospital. Talking about that left me in awe that everything seemed normal, happy and peaceful there, while a couple of months ago it was total chaos,” says Hammond.

After Dimona, Halpern’s students joined Isralowitz’s students in the classroom for psychological first-aid topics including international perspectives of addressing trauma; the elements of intervention and listening, hearing, responding and comforting; defining the first-responder’s place in in this process; identifying vulnerable populations; and dealing with children exposed to trauma and disaster.

Despite severely inclement weather, Isralowitz’s students – many of whom live far from Beersheva and are parents of young children – didn’t miss a session.

“Every participant from New Paltz was overwhelmed by the warmth, hospitality and amount of information presented to them in an objective way, and they all said they wanted more time here,” Isralowitz tells ISRAEL21c.

“In difficult times, these bridging relationships bring a sense of balanced perspective to the situation.”

In March, SUNY-New Paltz Dean of International Programs Bruce Sillner is expected to come to Beersheva to explore furthering the scope of activities between the respective institutions. Sillner and Isralowitz are hoping to expand the cooperation to include the Ye’adim Young Adult Center of Dimona.