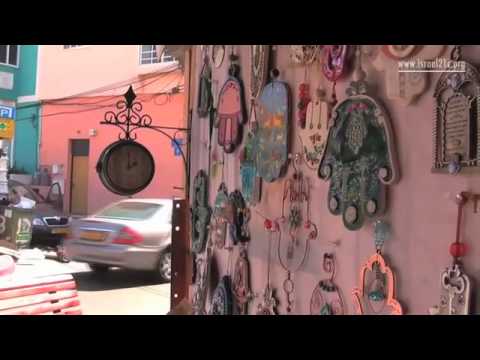 Tucked away in southwest Tel Aviv is Neve Tzedek, the first Jewish neighborhood built outside the port city of Jaffa. Once a slum in danger of being knocked down, it’s now one of the trendiest and most expensive areas in Tel Aviv.

Neve Tzedek was founded in 1883 by the Chelouche family, who wanted to escape the sewage problems and disease of Jaffa. Five years later, 48 families followed and the neighborhood was officially established in 1887.

Over the years, as Tel Aviv spread north away from the coast, the neighborhood fell into complete disrepair until the municipality threatened to demolish the area. The trend was reversed in the 1980s, when the Dellal family converted an abandoned schoolhouse into a center for Israeli dance. The Suzanne Dellal Center became Israel’s top dance venue.

Today, the neighborhood is filled with bars, restaurants, boutiques and cafes, offering the best of Israeli food, ceramics, fashion, jewelry, design and more.

Photo by Yossi Zamir/Flash90.
Young people enjoy themselves in one of the many bars in Neve Tzedek.

ISRAEL21c’s Sara Sorcher takes her camera on a stroll through Neve Zedek. She catches Israeli actress Hadas Moreno, between rehearsals at Suzanne Dellal, and talks to a local tour guide, boutique owners and residents, giving a unique taste of the area.

For Email Marketing you can trust
UNCOVER ISRAEL - Get the ISRAEL21c
Weekly Edition free by email
Sign Up Now!
Bring Israel's story to life.
Millions of people around the world rely on us to gain a deeper understanding of Israel. We are the trusted source for original content you won't find anywhere else.
You can make a difference. Donate today to support journalism that brings Israel’s story alive.
SUPPORT ISRAEL21c
Read more on:   Travel, Neve Tzedek