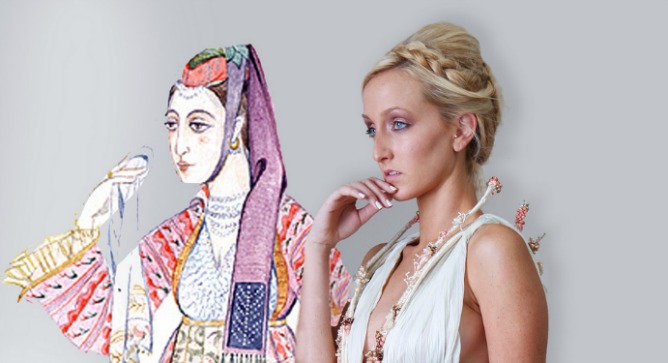 These two dresses are part of a new exhibition, “Here Comes the Bride: Wedding Gowns Embroidering the Story of the Jewish People,” at Beit Hatfutsot, The Museum of the Jewish People, through the end of February 2014. From Tel Aviv, it will go on the international road, stopping first in Austria.

“Here Comes the Bride” results from a unique collaboration between Beit Hatfutsot and Ronen Levin’s third-year wedding-gown design students at Shenkar College of Engineering and Design.

Each of the 14 students received a sketchbook and access to the museum’s entire collection of synagogue models, Judaica, marriage contracts, musical instruments, embroidery, dowry chests and family photos, according to Irit Admoni Perlman, director of the museum’s Israel Friends organization and the innovator of the collaboration.

“Initially, we thought the synagogues would best connect them with the Jewish lifecycle traditions,” Perlman tells ISRAEL21c. But many of these talented students delved deeper, as chronicled in their sketchbooks, which are part of the exhibition.

“Most of them started with one idea and ended with something else,” says Perlman. “At the end of the day, they all did something related to their roots.”

The exhibition of 13 bridal dresses, one henna ceremonial gown and one groom’s outfit reflect styles and traditions of Jewish communities in Yemen, Iraq, Turkey, Salonika, Spain, Poland, Germany, Morocco and Algiers. It was first debuted at the 2012 Tel Aviv Fashion Week and at an event of the Nadav Foundation, a Beit Hatfutsot supporter and cosponsor of the exhibition.

“There is nothing like this in the world,” says Perlman, giving ISRAEL21c a sneak preview of some of the exquisite works before the show opens on September 18.

Tradition with a modern twist

In her sketchbook, Adi Baskhi explains that her crepe-and-organza creation copies the delicate woodcuts and thin silver cords on the oud and qanun, two traditional Middle Eastern stringed instruments that formed the soundtrack of her childhood in an Iraqi Jewish home. 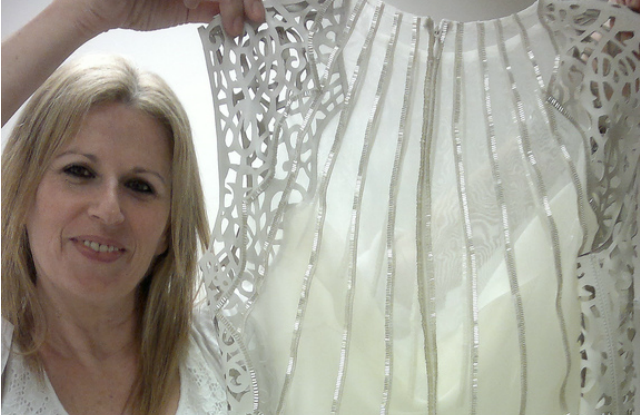 Tiny horizontal silver beads are stitched in two lines down the bodice of Bakshi’s dress to evoke frets, while hand-cut leather insets join the front and back of the dress to mirror the woodcuts. 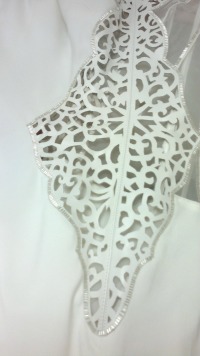 Detail of the hand-cut leather on Bakshi’s design.

Delicate crochet embroidery incorporated into Hadar Brin’s voile gown evinces the meticulous scribal arts practiced by her great-grandfather in Poland, who hid a mezuzah upon the advent of World War II that was retrieved by her family 60 years later.

A replica of a wall of the El Transito Synagogue in Toledo, Spain, inspired Levi Shenhav.

Chen Ariel Nachman’s ancestors are from Thessaloníki, Greece, where Jewish women once adorned their heads with amulets embroidered with baroque pearls in the shape of the Tree of Life symbolizing the Torah and the cycle of life.

“I tailored the gown from wrinkled chiffon embroidered with baroque pearls, lace and beads, sequin leather and ropes coiled with embroidery threads, reminiscent of the fringes adjoined to Jewish prayer shawls, wishing to create an organic and natural look,” he writes. 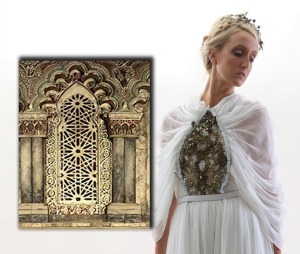 Twelfth-century German wedding rings in the shape of a house inspired Eyal Ron Meistal to incorporate the rings into the wedding gown he created.

“The gown borrows from the formal structure of the ring… tailored of wild silk embroidered with thread and beads with ornamentation borrowed from the ring. The silk organza strengthened with Plexiglas rods symbolizes the wedding canopy rods that adorn the bride’s veil.” 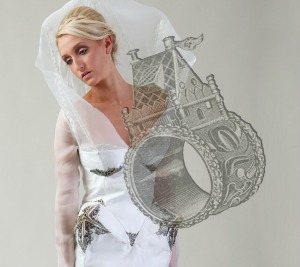 Shani Dahan and Shani Zimmerman together created a Moroccan-style bridal gown, henna dress and groom’s ensemble inspired by the Dahan family’s heirloom baby outfit used at circumcision ceremonies, as well as the traditional jalabiya robe used in the henna ceremony.

Perlman notes that the student designers used tradition as a springboard to design garments “with a modern twist.”

For example, Chen Meron fashioned a simple but revealing bridal gown inspired by the leather straps of the tefillin (phylacteries) worn by Jewish men as a symbol of connecting to God and preserving Jewish identity through the trauma of the Holocaust that the Meron family survived.

Meron’s gown contrasts the masculine elements of tethering, binding and clasping the leather to the arms, with the feminine, flowing bridal gown tailored of heavy crepe fabric accented by pale leather straps embroidered with golden beads.