When Maayan Cohen’s partner was diagnosed with a cancerous brain tumor, she was suddenly thrust into a world of specialists, tests, recommendations and paperwork. It was overwhelming for the then 25-year-old Tel Aviv University biochemistry graduate, who was working as a senior analyst at Tel Aviv Strategic Consulting.

Midway through what would stretch into a two-year ordeal, Cohen realized there might be a better way of managing the process.

Her new mobile app, Hello Doctor, launched for Apple devices in August. The app allows patients and their case managers (like Cohen) to digitize and organize all the paperwork they currently carry in a binder. Results from blood tests, ER visits, surgeries, CT scans and more can be organized into “smart lists.”

Patients can then easily call up the right records and never succumb to what Cohen says is the case manager’s greatest nightmare: missing the one document your doctor needs to decide on the spot if you should go for more chemo, surgery or an alternative treatment … and your few minutes of precious face time are up and it’s on to the next patient.

The idea of patients carrying their medical records with them in electronic form is nothing new. More than a decade ago, technologies putting patient data on a chip embedded into their HMO card or on a USB thumb drive abounded, but they never gained traction. Cohen isn’t surprised.

“The execution wasn’t connected to reality,” she says. “Doctors won’t take the risk of putting a USB key into their computer. And many are techno-phobic even with websites. You can’t ask a senior oncologist in a top hospital to go to your personal medical portal and enter your password. Most doctors want you to bring in a paper copy.”

Tablet computers, however, are another matter. “We haven’t heard any objections to patients bringing in their records on an iPad,” Cohen continues. “85 percent of US doctors own a tablet. They’re not afraid of them. Rather, it saves them time. And perhaps most important, it doesn’t force the doctor to open his or her computer.”

There are several ways to get records into Hello Doctor. You can use the camera in your iPad to take a picture of a document. Or, if it’s already on your computer, you can copy it to Hello Doctor using the Dropbox file transfer application. Exporting test results directly from an HMO’s patient portal is in the pipeline.

Another feature, which Hello Doctor users have requested that’s also in development, is the ability to take notes using the app. “It’s our most requested feature,” Cohen says. The idea is to allow patients to write down questions about a test result or medication dosage, for example, right on the appropriate electronic record.

Once data is input into Hello Doctor, it’s stored locally on the patient’s iPad. “In another two months, we’ll release a version that will back up that information on the cloud and that will synch it to another device, such as the patient’s iPhone,” Cohen says. All data will be transferred using the industry-standard SSL security protocol. 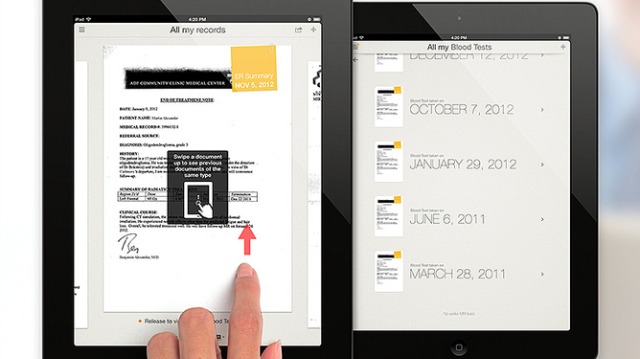 A new Israeli-made app replaces all the paperwork.

The backup and synchronization is key. If your iPad is stolen, your data is gone (just as if you lose your physical paperwork). Once the synch is in place, users will be able to instruct Hello Doctor to delete all the data from their mobile device via a Web interface. The app always requires a password, in order to keep your records as private as possible.

Still, some data does get sent beyond your iPad and the cloud. That forms the basis of the company’s business model. In the same way that Google scans your Gmail messages for keywords to serve up ads, Hello Doctor will look through your records (“anonymously and aggregated,” Cohen insists) to check on how a patient is responding to specific treatments – for example, is a particular medication causing nausea or vomiting? Hello Doctor will then sell that data to pharmaceutical companies “so they can make better decisions about future drug development,” Cohen says.

This is par for the course in the Internet age. Facebook is free because it owns your data and can provide it in the same non-identifiable way to advertisers. Hello Doctor’s success will hinge, in part, on whether users find enough value in the app to ignore any concerns about what’s being done with their records behind the scenes.

“It’s a win-win model,” Cohen stresses. “Patients don’t have to pay anything, they get a full integrated solution that will grow over time, and it helps pharmaceutical companies build better drugs.”

Cohen started Hello Doctor with two Israeli co-founders, Eran Keisar and Ziv Meltzer. The company has a staff of eight and works in Tel Aviv.

Hello Doctor competes most directly with Microsoft’s HealthVault, which is available for the Web and tablet devices, including the iPhone. A variety of other mobile apps allow you to input emergency information such as your allergies, which vaccinations you’ve taken and emergency contacts, but don’t sport the broader vision Cohen and her team have for Hello Doctor.

As for Cohen’s partner, there’s good news at the end of this story: After multiple surgeries and rounds of radiation and chemotherapy, he is now “100% cancer free,” Cohen says.