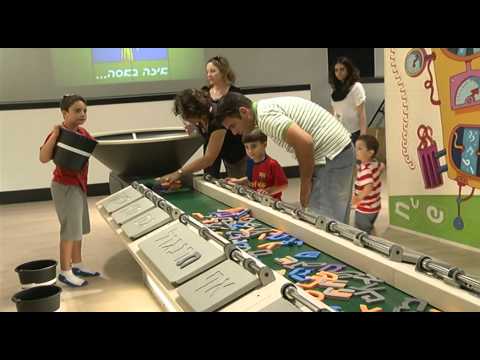 Photo by Yaakov Bril
The ‘A-B-See-Do’ exhibition at Beit Hatfutsot museum is this summer’s hottest ticket.

Eliezer Ben Yehuda, the father of Modern Hebrew, would undoubtedly be dumbfounded to know that a new children’s museum exhibit dedicated to the essence of the Hebrew language is one of this summer’s hottest tickets in Israel.

The A-B-See-Do (A-Ba-Ga-Da in Hebrew) exhibition, at the Beit Hatfutsot – Museum of the Jewish People in Tel Aviv, is in such high demand that visitors need to book at least a week in advance.

A-B-See-Do is an interactive exhibit and the first of its kind in which the Hebrew language is presented in an entertaining way.

Think education meets playground. There are climbing walls, slides, stairs and ramps alongside word-slot machines, computer games, a television show teaching sign-language, and a dog that says words based on letters put in her mouth.

The group behind the exhibit is Children’s Museums of Tel Aviv (CMOTA), a non-profit organization hoping to build a center for innovation and creativity in Tel Aviv. In the meantime, they’ve created A-B-See-Do.

“The exhibition focuses on language as an integral part of the culture in which it has developed, language as instrumental in renewal and revival, and language as an intrinsic promoter of dialogue among people,” the curators wrote on the CMOTA website.

Children’s museums are one of the world’s fastest growing cultural institutions and there are about 400 across the globe. And while Israel has the most museums per capita in the world — and an excellent children’s museum in Holon — there’s definitely room for another kids-oriented arts center.

CMOTA says its vision is to “create an environment of personal growth that stimulates all senses and makes learning fun; where the child takes the experience back home and enriches society.”