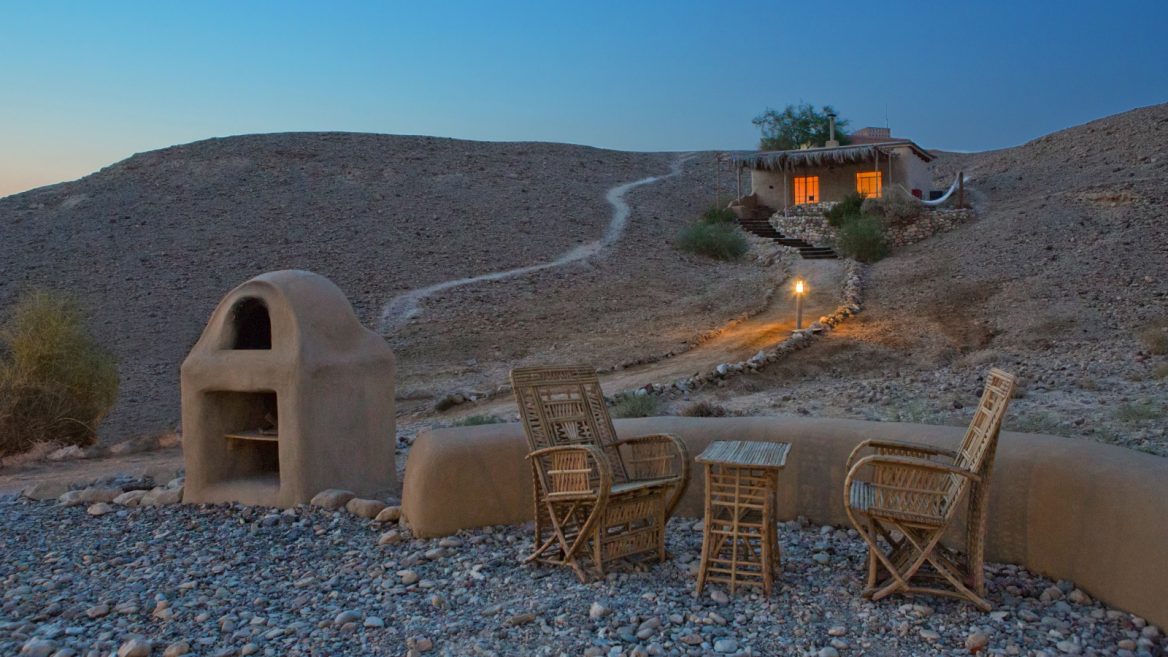 How would you like to be flown by helicopter to Israel’s largest natural crater for a gourmet chef-prepared dinner around a bonfire, serenaded by professional musicians, then partake in a little star-gazing before retiring to a luxurious tent with a relaxing desert yoga session and delectable breakfast the next morning?

Or maybe a stay in a boutique Golan vineyard with 30 of your closest family and friends, and learning to cook a foraged meal or riding ATVs is more your speed? 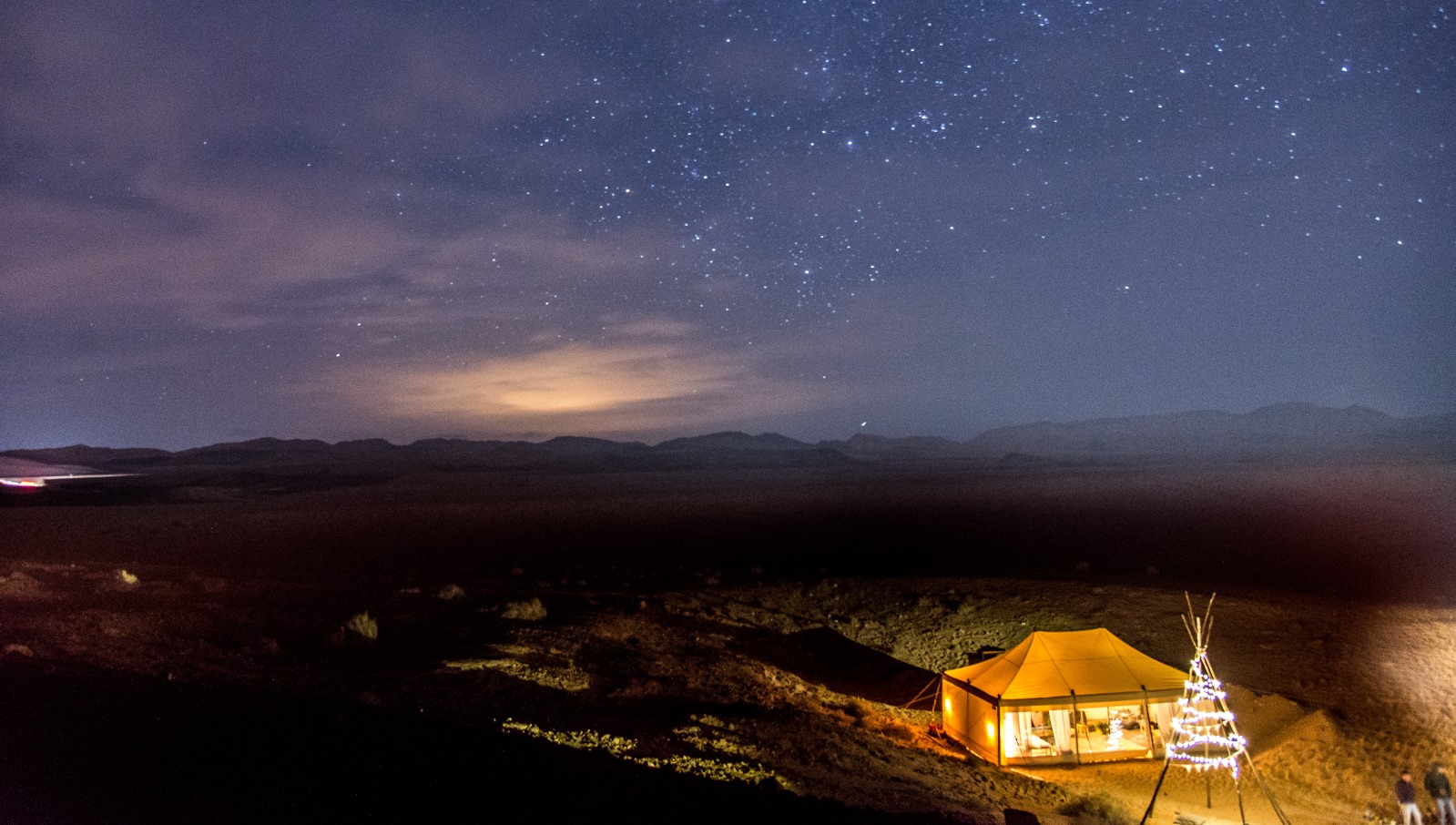 Glamping under the stars in Israel. Photo by Daniel Bear

These are some of the custom experiences offered by Itay Kadish Katz’s company Glamping.co.il, a luxury camping company he established in 2012 while staying in an upscale hospitality tent in a picturesque Israeli valley.

“I awoke early in the morning and purchased [the domain name] Glamping .co.il right then and there,” says Kadish Katz, who also owns EasyCamp and Happy Glamper, which focus on varying levels of luxury and comfort from simplistic to posh.

“Around the world it is already clear that the next big thing in Airbnb-style tourism is experience-based tourism and this is exactly what glamping is,” he explains. 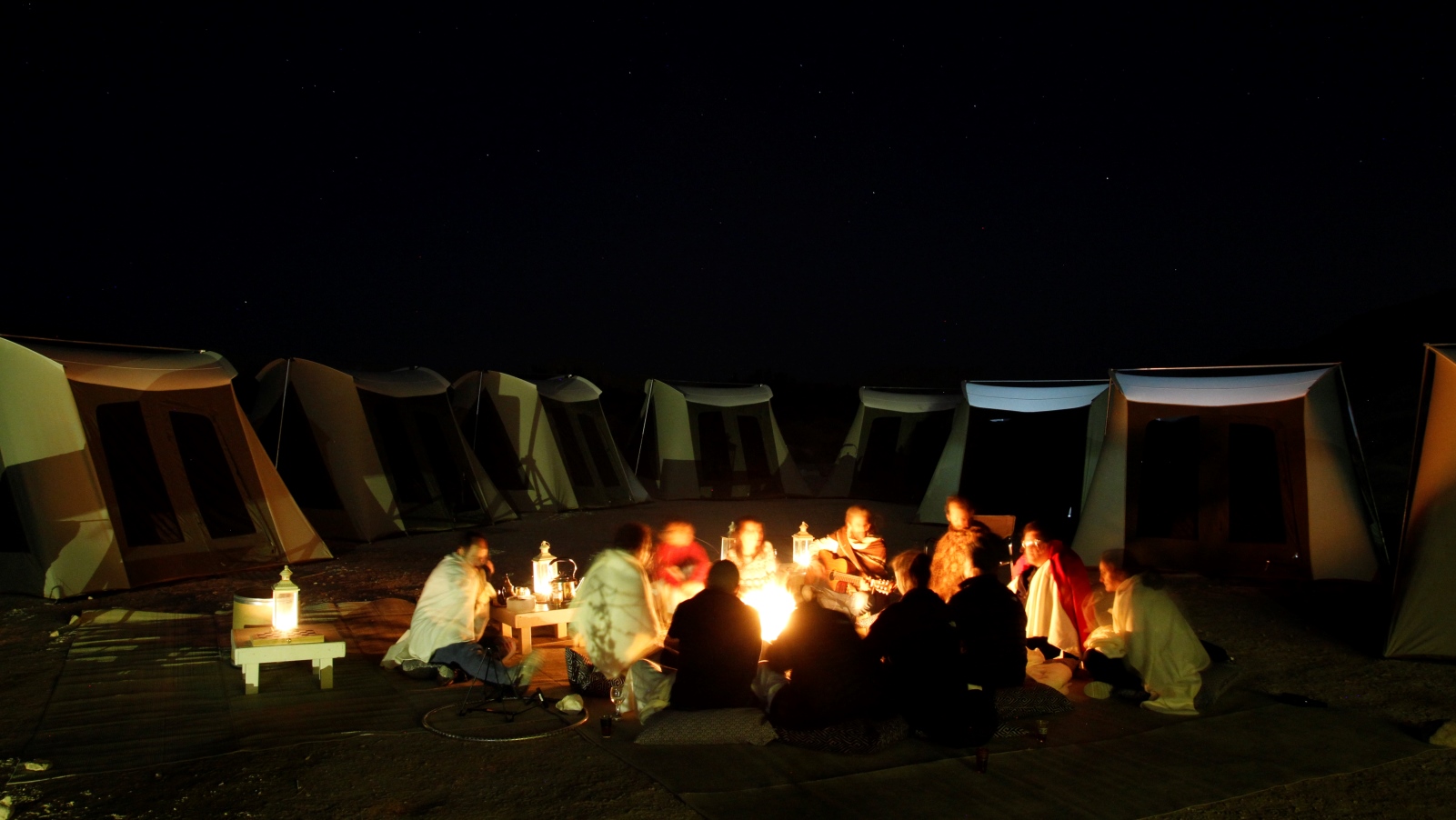 Aside from putting the idea of experience-based travel into action, glamping allows for the following: connection with the Israeli land on an up-close-and-personal level without having to “rough it,” and bringing tourism out of the cities and into the expansive wilderness that makes up a large portion of the Jewish state.

The Israeli Ministry of Tourism, known for its alluring ads featuring attractive Israelis sunbathing on beaches, is now also encouraging tourists to head southward to the desert for vacation time.

“The Pop-Up Oasis project, which we just completed with the cooperation of the Ministry of Tourism in April, generated a definite buzz in the area,” Kadish Katz says of the Negev: Pure Desert Magic campaign and social-media contest designed to draw European visitors to the Negev.

Charline Wolff, a 24-year-old biology student from Germany, was one of several winners of the customized five-night glamping experience, which included jeep rides, guided hiking, Segway tours and a star-gazing experience in Timna Park near Eilat, as well as touring in Jerusalem and Tel Aviv.

A personal butler even made Wolff a vegan meal to fit her dietary preferences.

“My mother tagged me on the Facebook competition post because she thought I would like it as I love being in nature so much. Before taking part in the competition, I had only really heard about snorkeling and diving in Eilat and the vegan foods and fun lifestyle in Tel Aviv. I hadn’t even realized there was a desert in Israel,” said Wolff. 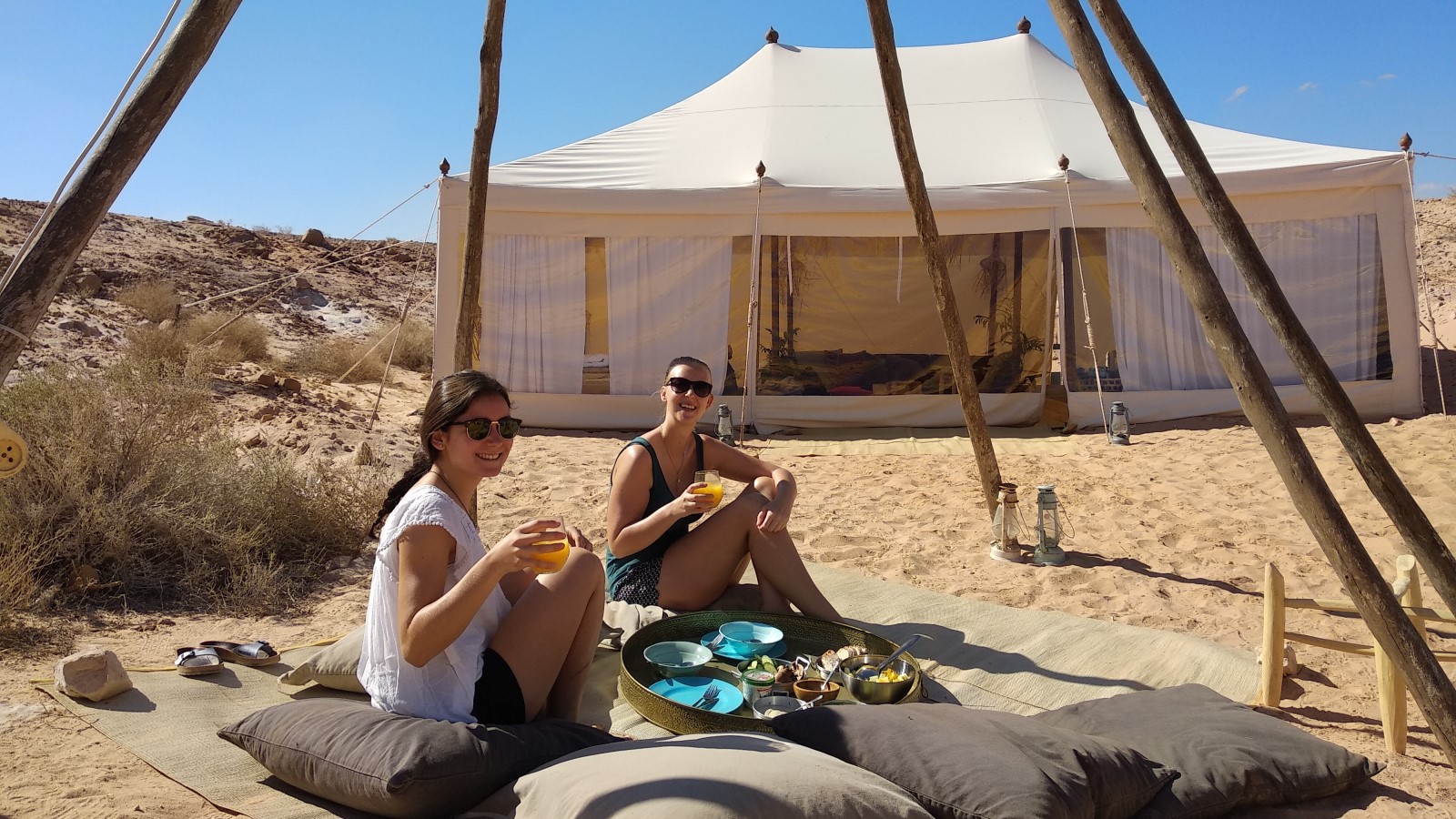 Unless you win a contest, a glamping trip in Israel will cost you at least ₪2,000 ($560) per night per couple, says Kadish Katz, “but certainly the sky is the limit.”

Upscale is just one facet of the burgeoning field of glamorous camping. The options range from eco lodges, Bedouin-style khan tents and yurts to just about anything else you can dream up that will offer comfortable accommodation close to nature, or more elaborate activity and sensory-based experiences than you’d get from traditional camping. What they all have in common is style, sensible comfort, and amenities. 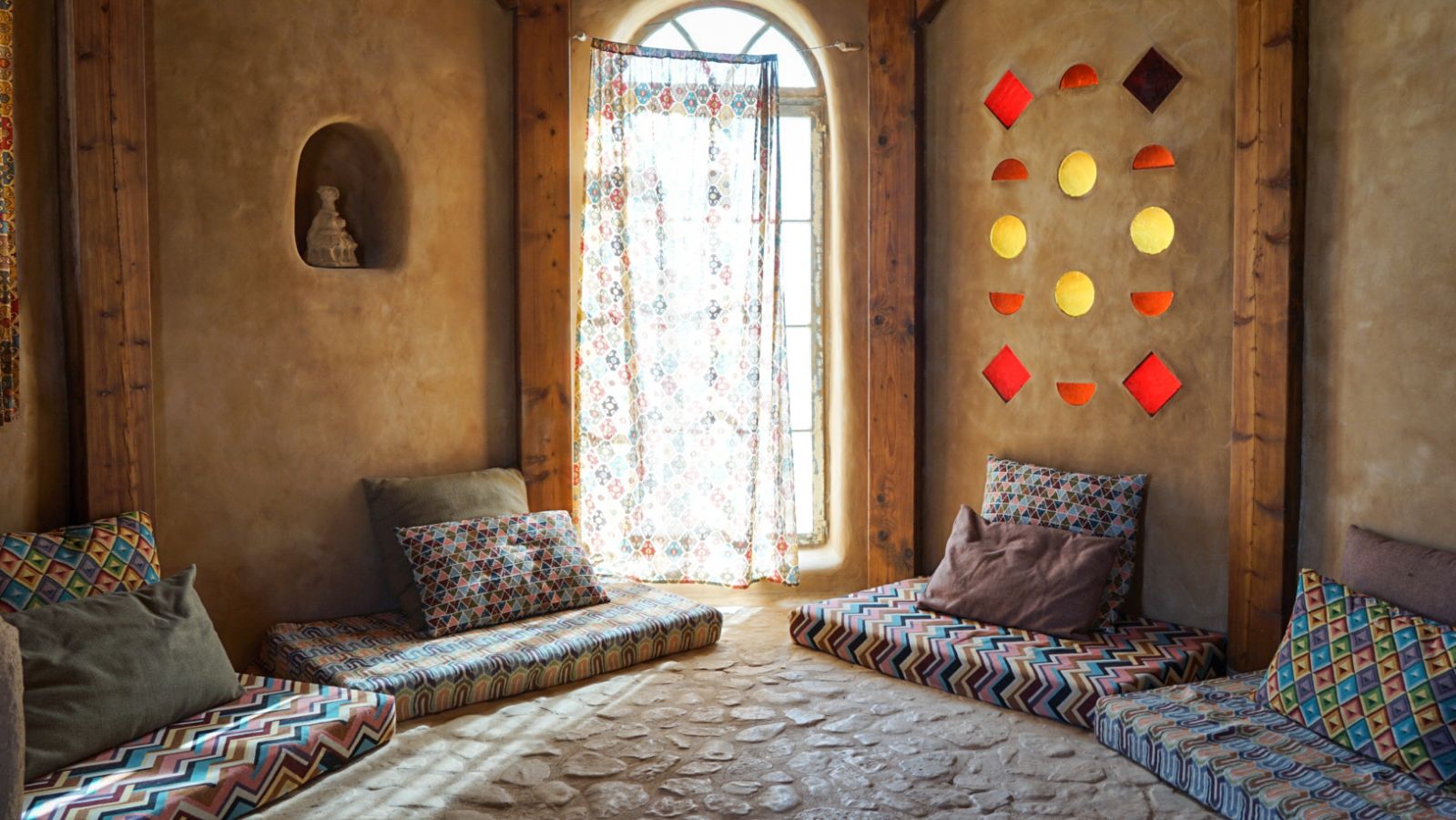 Inside an eco-lodge at Desert Days in Tzukim. Photo: courtesy

Eco lodges like Desert Days in Tzukim and on Kibbutz Lotan in the Arava Valley of the eastern Negev take the concept beyond comfort and feeling at one with nature. On Lotan, you have the option to learn about eco-sustainability through building, organic gardening and even composting courses.

Each guest house in Lotan’s eco-village is built from sustainable eco-materials and has a composting toilet. The area, known for its agriculture and bird-watching, offers serene scenic mountain views just a half hour north of the Red Sea resort city of Eilat.

Other options such as the Yurt in Amirim, outside Safed (Tzfat) in the Galilee, embody a modern inn-like setup, albeit still technically under the stars, and can be booked through online sites such as Airbnb and booking.com.

Traditionalists can choose their level of glampdom at sites like Shayarot, a Bedouin-style campsite with options ranging from traditional tents to air-conditioned cabins equipped with a kitchenette, to a piece of earth between palm trees. Whatever level you choose, you’ll have access to a hot shower, flush toilet and cool drinking-water fountains.

“Israelis love the outdoors — camping and hiking — but they also love to feel special. In glamping they can have both,” comments Dror Guriyon of Silent Arrow, a luxury campsite in Mitzpeh Ramon that attracts backpackers from around the world. There guests can prearrange tai chi sessions, survival workshops and even a lesson in desert archery. 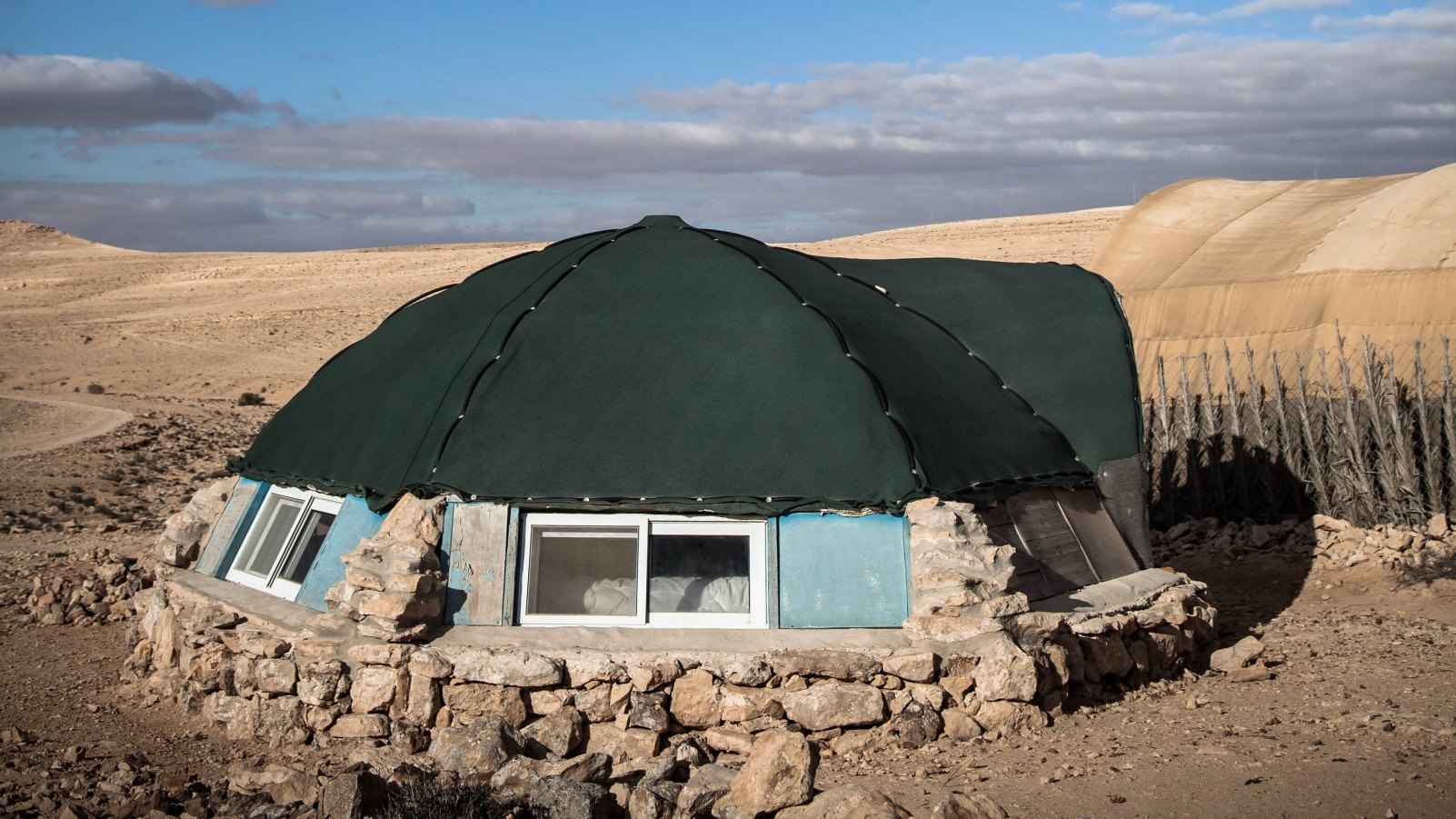 Rinat Bashan from Desert Days adds, “[Glamping] offers the possibility to feel close to nature, close to the earth, in a desert landscape, and on the other hand indulge in a comfortable bed, a hot shower, a fully equipped kitchen, hammock and firewood. We maintain simplicity and work with natural and local materials, thereby enabling nature to be present and penetrate the heart.”

Bashan’s eco-friendly earth cabins and Bedouin-style accommodations are made of sustainable materials like mud, straw and stone.

As the glamping movement picks up steam in Israel, you really can have your cake and eat it too — in comfort and style. 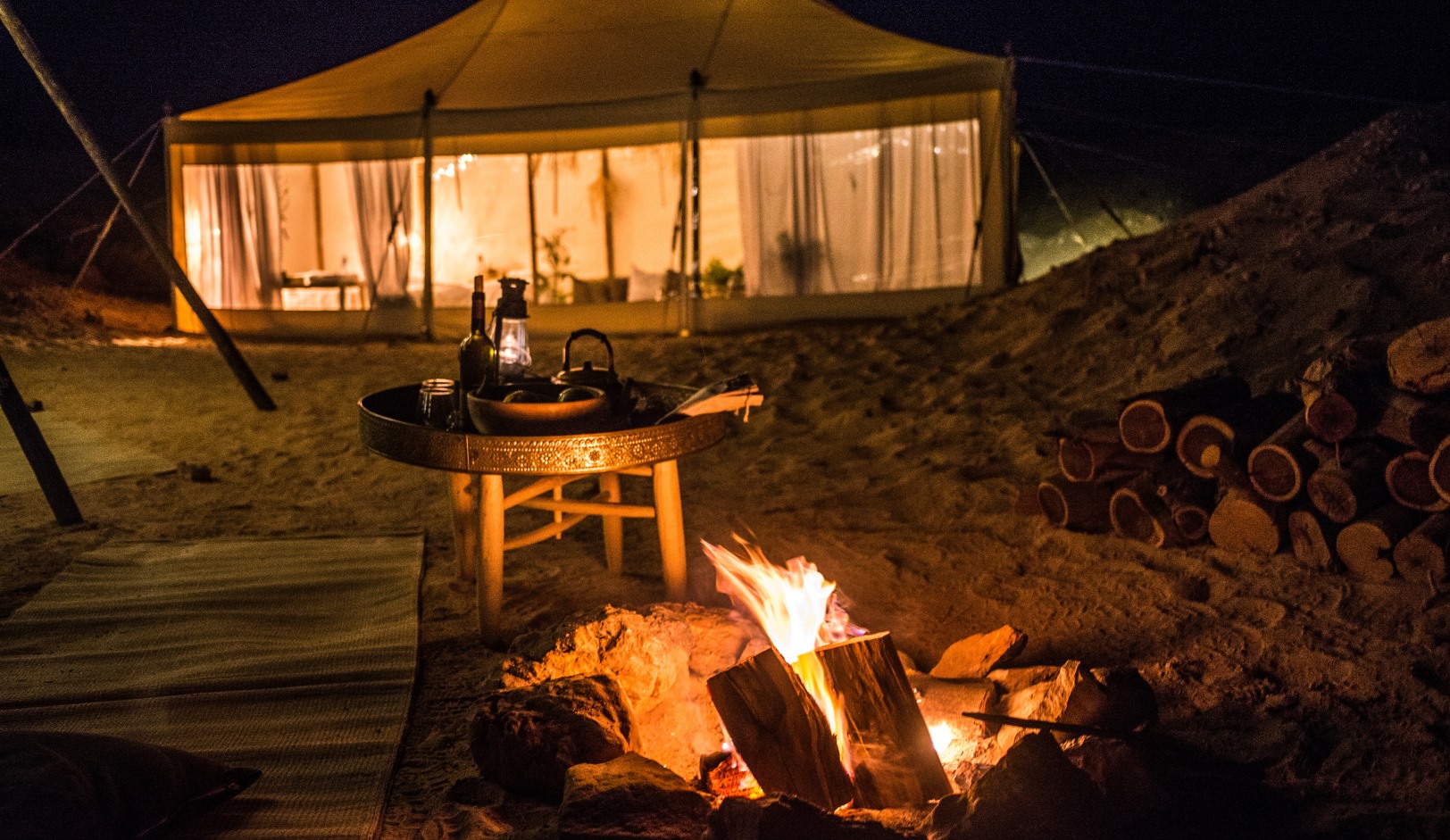 Israel glamping photo by Daniel Bear
UNCOVER ISRAEL - Get the ISRAEL21c
Weekly Edition free by email
Sign Up Now!
Bring Israel's story to life.
Millions of people around the world rely on us to gain a deeper understanding of Israel. We are the trusted source for original content you won't find anywhere else.
You can make a difference. Donate today to support journalism that brings Israel’s story alive.
SUPPORT ISRAEL21c
Read more on:   Travel, Camping in Israel, glamping in Israel, Mitzpeh Ramon, Kibbutz Lotan, Moshav Amirim