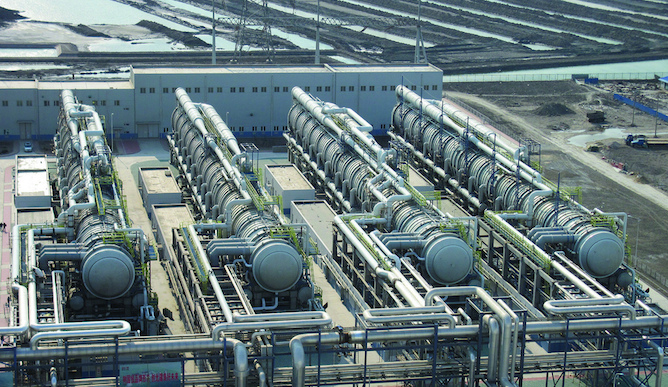 Environmentalists usually agree that making fresh water from brackish (salty) water should be a last resort. Building desalination plants requires millions of dollars in desalination technology, and it’s costly to produce potable water – both in terms of energy to run the plants and the environmental pollution they emit.

The Israeli company IDE Technologies – already planning the biggest desalination plant in the United States — is pushing the borders in this domain a little closer to sustainability in Japan, where it is working to make floating desalination plants.

Udi Tirosh, a business development director at IDE, told the business newspaper: “Floating plants will not replace the land-built ones, but floating plants can become an alternative that does not saddle a country with the burden of maintenance once local water tables improve.”

This could be welcome news in parched regions of America like California, which is experiencing an historic drought.

The global desalination market is expected to reach $15 billion by 2018 as the world’s growing population becomes more demanding.

The idea of floating technology on large ships or barges is not entirely new. Turkey is floating seven thermal power plants around its shores on Powerships, and a Russian company is looking to develop a floating nuclear power plant.

IDE’s dreams are to stick with water, business that it does best. The draft sketches for the first Japan-launched vessel show an operation that could produce up to 120,000 cubic meters of freshwater every day.

The business plan is to develop a fleet of desalination ships with partners around the globe.

In Japan, IDE plans to deliver its first water-producing ship with water on tap, from the sea, within the next three years. This would supply enough water for a city of about 850,000 people.

For more about IDE and its technologies, see http://www.ide-tech.com/

UNCOVER ISRAEL - Get the ISRAEL21c
Weekly Edition free by email
Sign Up Now!
Bring Israel's story to life.
Millions of people around the world rely on us to gain a deeper understanding of Israel. We are the trusted source for original content you won't find anywhere else.
You can make a difference. Donate today to support journalism that brings Israel’s story alive.
SUPPORT ISRAEL21c
Read more on:   water crisis, IDE Technologies, Spotlight on Israel