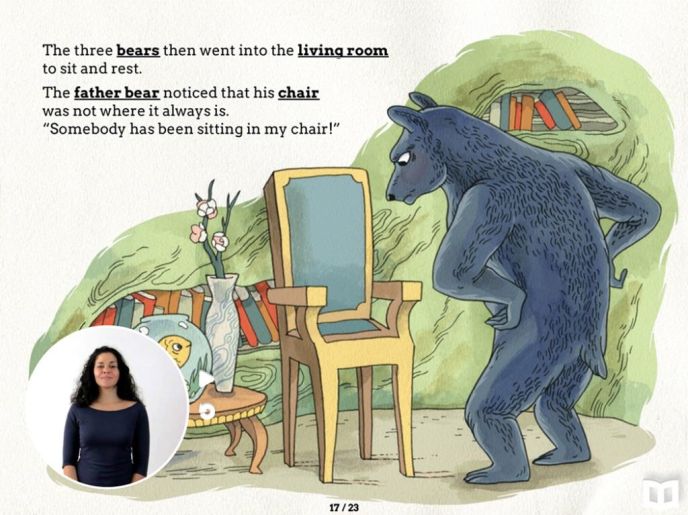 A page from eMotion’s Goldilocks.

A page from eMotion’s Goldilocks.

Eyal Rosenthal doesn’t expect to make a mint from his new eMotion Stories digital books in English and American Sign Language. The world’s first interactive bilingual e-library for parents of children with hearing impairment was created as a labor of love, though the market is quite limited.

Rosenthal, an American who moved to Israel in 2008, expects only to reap the satisfaction of bringing a new dimension into the lives of children who otherwise would miss out on reading classics with their parents such as Goldilocks, Cinderella, The Ugly Duckling, Little Red Riding Hood and Three Little Pigs.

Each of the interactive fairy tales features pictures by world-class Israeli illustrators and is narrated in American Sign Language, in synch with the text, by deaf actress Alexandria Wailes.

Soft-launched last May, eMotion Stories offers a free download of its iPad app along with the first book; additional e-books can be purchased for $3.99 apiece.

“There have been 2,000 to 3,000 free downloads and several hundred downloads of paid books,” Rosenthal told ISRAEL21c in October. “Our total revenues are less than $1,000, but this wasn’t done for the money.”

His idea arose in September 2012 over coffee with a friend who has a deaf niece. Rosenthal had just read his nephew a bedtime story, and asked his friend if she’s able to do this with her niece.

“The response was that there are no good solutions. Her sister signs her niece a bedtime story or might put on a YouTube video, but there was nothing available for them that comes close to the experience of a parent reading a story to a child. And so I set out to change that.”

Armed with his vision, Rosenthal – a Tel Aviv resident who does business development and product management at Leumi Tech – got hooked up with the developers at Tel Aviv’s Go UFO web and mobile creative application agency. “Without them it could not have occurred,” he says.

Go UFO creative partner Eddie Goldenberg tells ISRAEL21c that his team “had a lot of experience in pro bono work, and it’s close to our heart to do things more social and environmental.”

Rosenthal’s concept struck a chord with him. “So-called ‘normal’ children can hear bedtime stories about princesses and dragons, but a hearing-impaired child misses out on that,” Goldenberg says.

“I found it so inspiring that Eyal wanted to enrich the vocabulary and allow for a story-time experience. So we started thinking together how to do it. We wanted to combine an interactive story, like those on tablets that are so popular, with the option to let the child or parent also read it using sign language.”

They thought immediately about TV news shows that feature a circle at the bottom of the screen where a presenter simultaneously translates into sign language. “We were certain someone else may have done it, but we saw nothing close, so we decided to do it.”

Believing that the most important aspect of a children’s book is the illustrations – yet hampered by a shoestring budget – Goldenberg approached his father, illustrator Mirel Goldenberg. His father drew the pictures for The Ugly Duckling and also brought to the project top-flight Israeli colleagues Noa Liberman and Shiraz Fuman, who agreed to work for minimal remuneration. 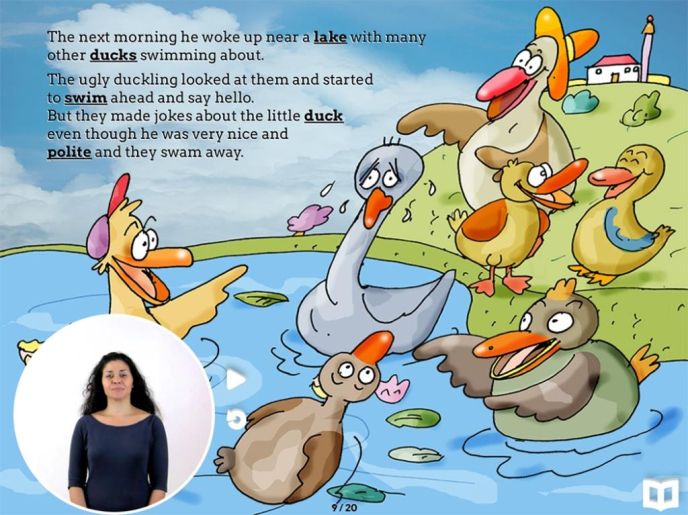 A page from eMotion’s Ugly Duckling.

Rosenthal, who grew up in Tenafly, New Jersey, contacted a friend from college now working as a videographer for News 12 New Jersey. His friend agreed to film Wailes doing the American Sign Language translations.

“From there it was a matter of producing the books and making the sign language fit the text,” says Goldenberg. “We had a lot of quality-assurance and feedback sessions with special educators and other people from the field.”

Because every country has its own sign language, the creators of eMotion are offering their “white-label” platform to other developers at no charge.

“The biggest potential market is the US and that’s why we decided to launch there first, but other countries can take the platform we built and create their own stories and add the sign language,” says Goldenberg. “In our hopes and dreams, every country will have its own app for children with hearing impairment.”

Rosenthal hopes to find some time to launch an Indiegogo crowdfunding campaign to finance an Israeli version of eMotion Stories and to produce additional storybooks in response to enthusiastic feedback from parents using the app.

“It was definitely a challenge, but it’s been an amazing experience,” he says.