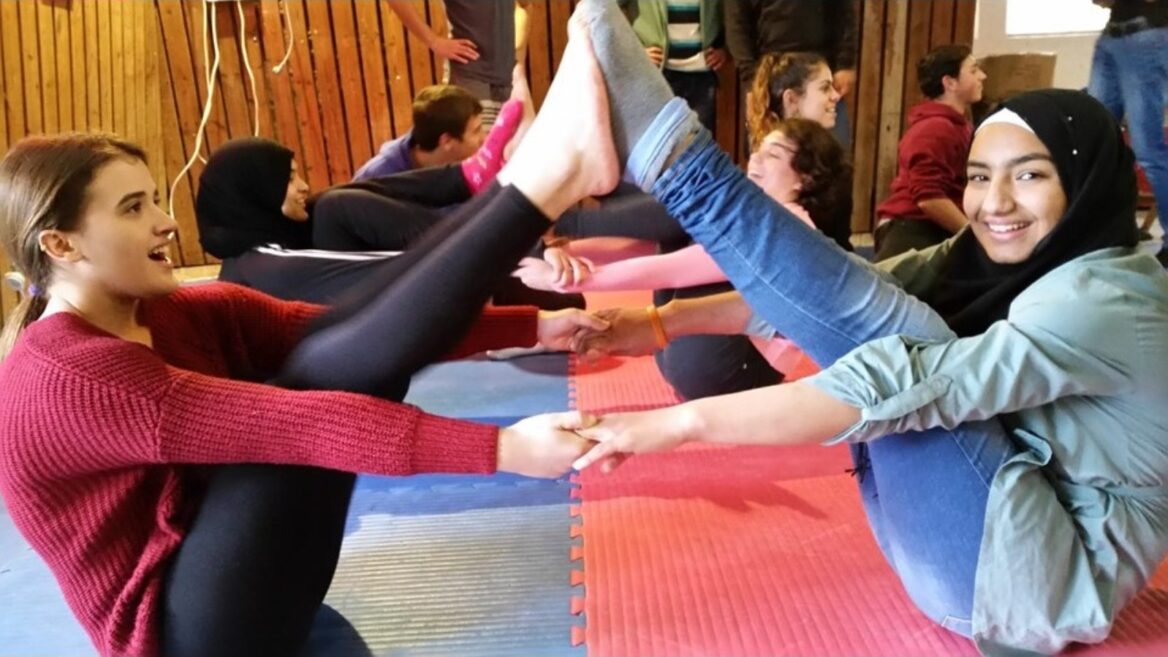 A cooperation workshop for Jewish and Arab teens the Israel Circus School, Kfar Yehoshua. Photo courtesy of A New Way

Avital Elyakim’s 10th-grade daughter prepared for her matriculation exam in civics in an unusual way: She and her classmates in a Jewish high school in Tel Aviv had study and project sessions with peers from a high school in the Israeli Arab city of Taibeh.

Parents were invited to the final meeting of the year, where facilitators divided the parents and children into small discussion groups.

“The general feeling was one of closeness and cooperation. One of my daughter’s friends had been hesitant to participate, and her parent was in my group. I saw the difference, the change in her because of the personal encounter,” Elyakim tells ISRAEL21c. 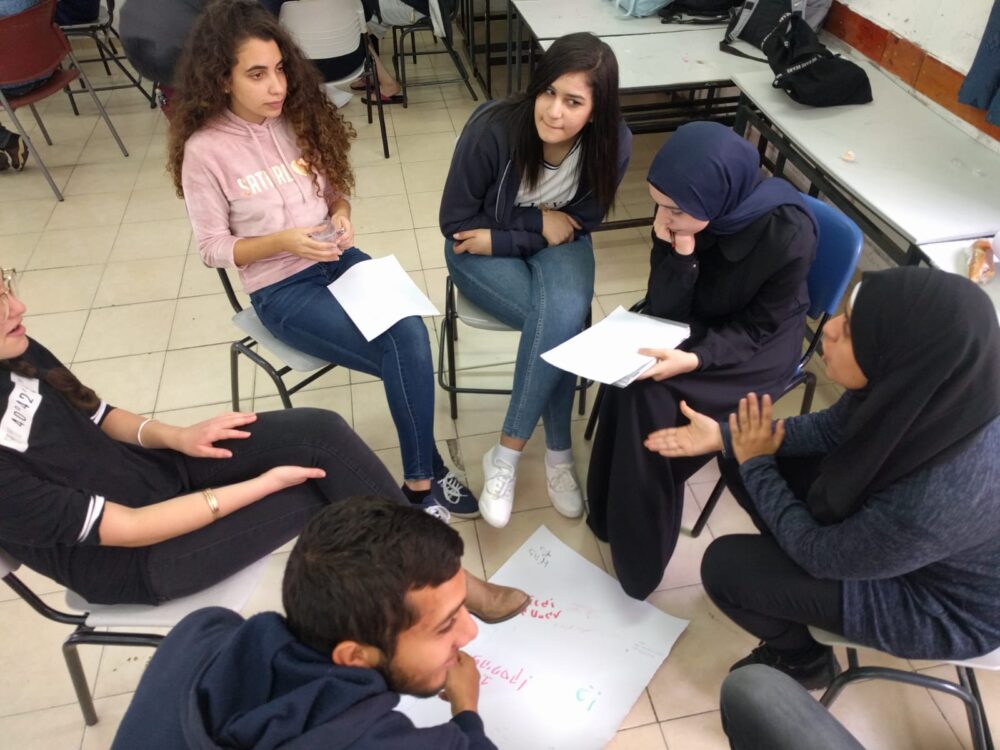 Studying together and develop joint research projects for the civic matriculation exams. Photo courtesy of A New Way

At the end of the evening, Elyakim asked the program manager how she could be involved in the sponsoring organization, A New Way.

When a marketing position opened at A New Way the following year, Elyakim left the high-tech company where she’d worked for 11 years.

She started last July, soon after A New Way founder Tikva Bracha won Ben-Gurion University of the Negev’s William Berelson Prize for the Promotion of Jewish-Arab Understanding in Memory of Yitzhak Rabin. 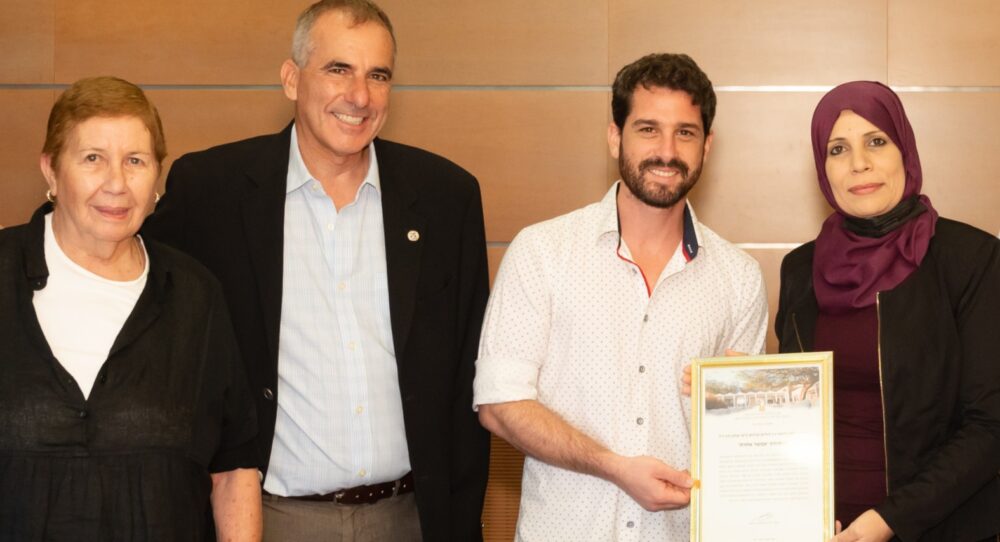 “Tikva saw that Jews and Arabs can connect without hate. She believed that the quality of relations between these two groups will largely determine the face of society and the future of the State of Israel,” says A New Way CEO Erez Bar.

“It started in 1998 as a group of social activists and academics talking about Arab-Jewish relations in Israel, how the future would look and how they could play a role in shaping it. For almost two years it was more like a think tank.”

But then came the Second Intifada, an Arab uprising marked by deadly terror attacks for more than four years.

“Tikva started moving the group from talking to doing,” says Bar. “She went to [the Arab municipality of] Kfar Kassem to start meeting people, especially in schools. Everything began there.”

Supported by the Israeli Ministry of Education and municipalities, A New Way serves an average of 5,000 participants every year in 40 municipalities. 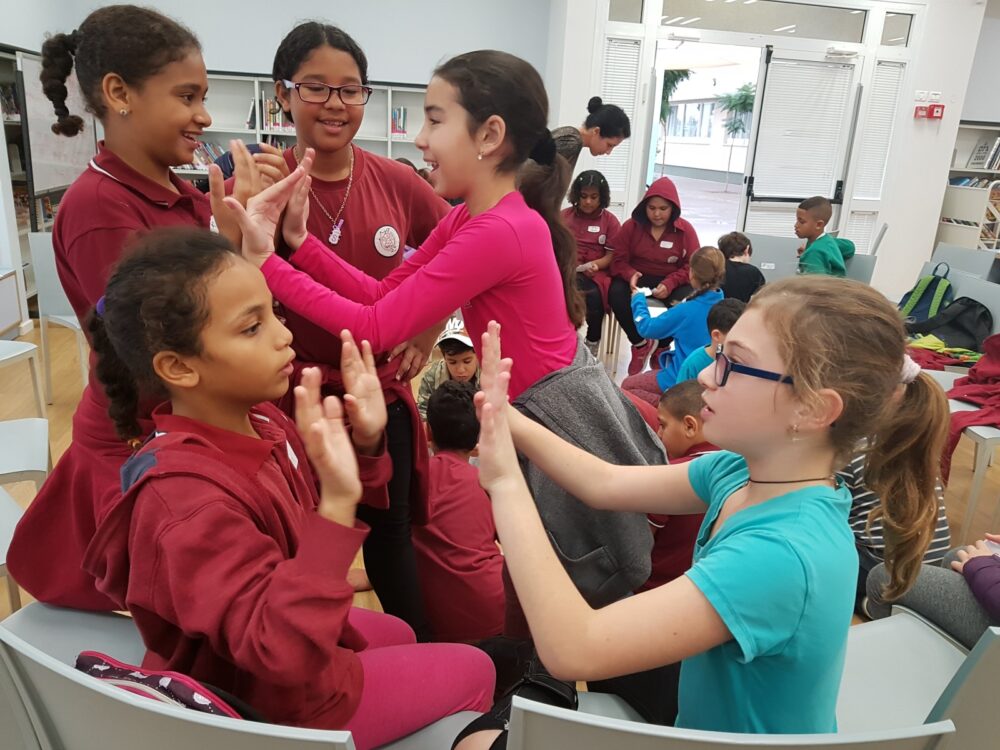 Jewish and Arab girls getting to know each other in Nazareth. Photo courtesy of A New Way

Bar describes four “circles” of activity. The first is students in fourth to 11th grade. The second is educators.

“This year we ran a 30-hour continuing education course for teachers and it was so successful the Education Ministry asked us to do a second one,” says Bar.

“We work a lot on empathy training in the classroom and creating social initiatives for multicultural encounters. Many teachers said this was one of the most unique continuing-ed courses they ever had.” 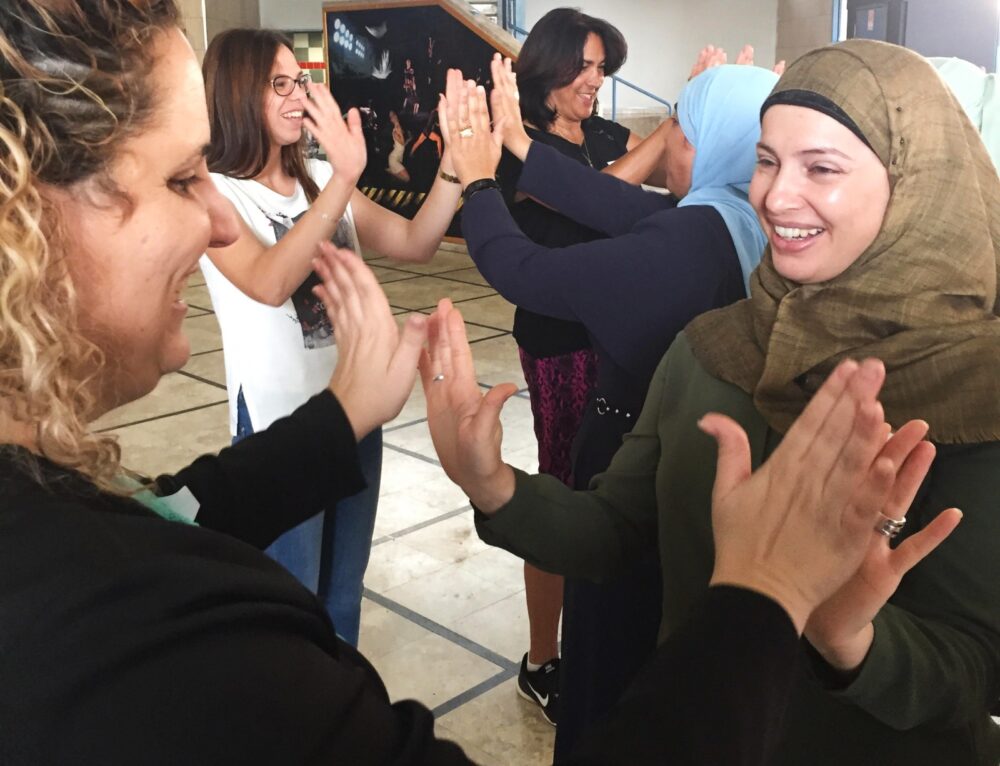 Middle-school teachers from Hadera and Ka’abiyye enjoying a multicultural encounter. Photo courtesy of A New Way

Parents are the third circle. A New Way runs at least 12 meetings each year of 30 to 40 groups of parents.

“Some don’t want their children to participate at the beginning, but after the parent sessions they want to do more and meet more. We have many parents joining as volunteers,” says Bar.

The fourth circle is mayors and municipal educational officials. Some 40 to 50 percent of A New Way’s budget is funded by host communities.

“Every circle interacts with the others, and this allows an impact to happen,” Bar says. 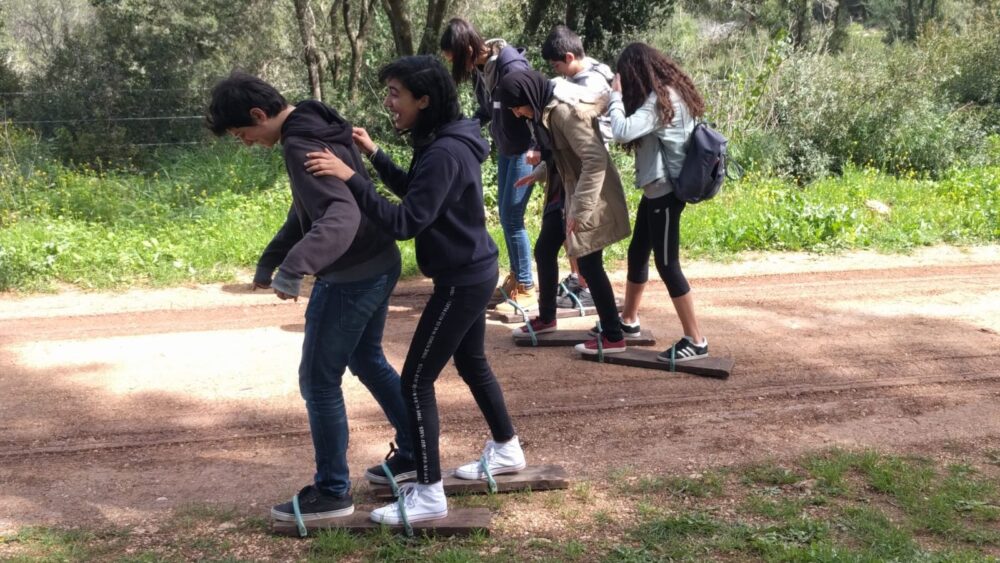 A nature challenges workshop in the Carmel Forest for Jewish and Arab children. Photo courtesy of A New Way

The pandemic temporarily halted many of the joint activities.

However, four of the biggest municipalities where the organization works — Migdal HaEmek, Nazareth and Nof Hagalil up north, and the Yehuda Regional Council near Jerusalem — continued funding programs in about 20 schools even during Covid.

“Two 11-year-old girls, one in Ramat Hasharon and the other in Kfar Kassem, had met before Covid in our group sessions and became good friends,” Bar relates.

“During Covid they still managed to meet. They sent me a picture from the Arab girl’s home with their families meeting and talking together at a time many Jews were scared to go to Arab towns because of high Covid rates.”

“We can see that we are lowering prejudice and stereotypes not only among children but also among their families,” he says.

The nonprofit also had to confront racial confrontations that boiled over in several mixed Israeli cities in May. One of those cities is Lod, where two years ago a group of mothers initiated a new chapter of A New Way. 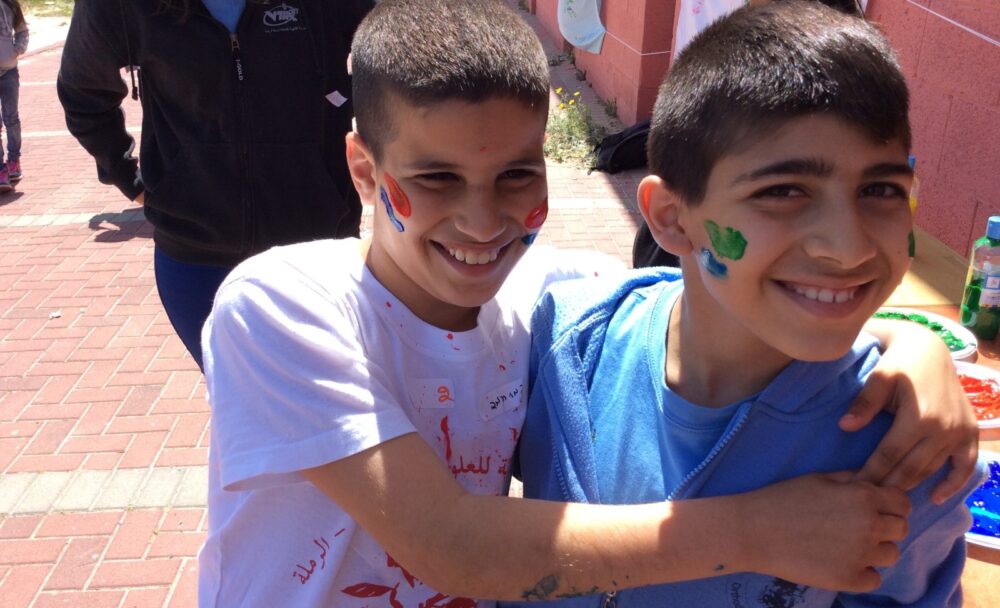 Boys from the Israeli mixed cities of Ramla and Lod participating in A New Way. Photo courtesy of A New Way

“During the violent events of May, A New Way surveyed eighth and ninth graders in our communities,” says Bar.

Results showed that A New Way participants felt 25% less hatred and 16% less anger toward “the other” compared to peers who did not take part. 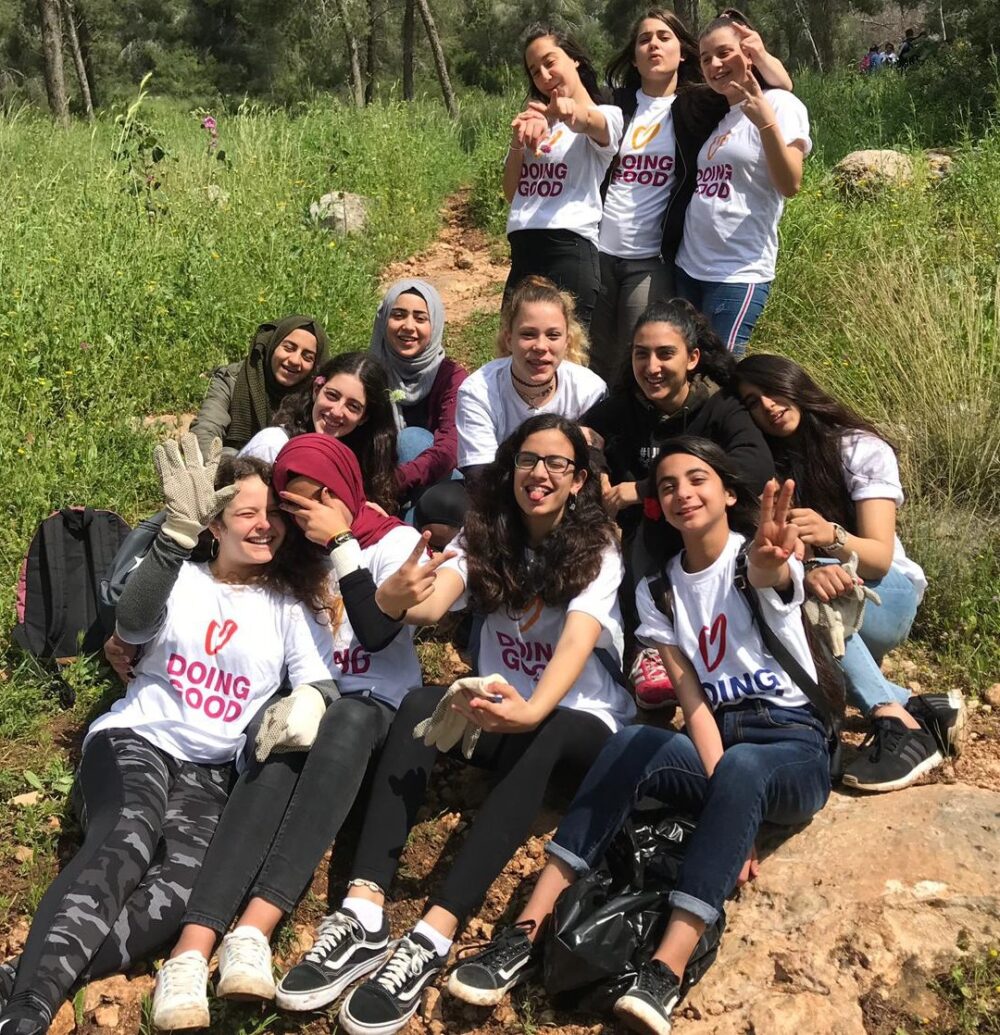 Arab and Jewish girls volunteered together to clear debris from a forest on Good Deeds Day in Israel. Photo courtesy of A New Way

“Those numbers show why the model of the four circles and learning from experience creates change, especially when there is violence,” Bar tells ISRAEL21c. “I was excited to see how big the difference is.”

Prof. Sarah Abu-Kaf,  head of the Conflict Management and Resolution Program at BGU and a member of the Berelson Prize Committee, was impressed too.

“Especially in light of the recent events in the country and the difficult experiences we have all gone through, the Berelson Prize is very important as an award designed to give appreciation and respect to organizations promoting good relations and strengthening ties between Jews and Arabs,” she said.

“The important message that [A New Way] conveys is that there are excellent ways to promote understanding, familiarity and good relations between the various groups in Israeli society.” 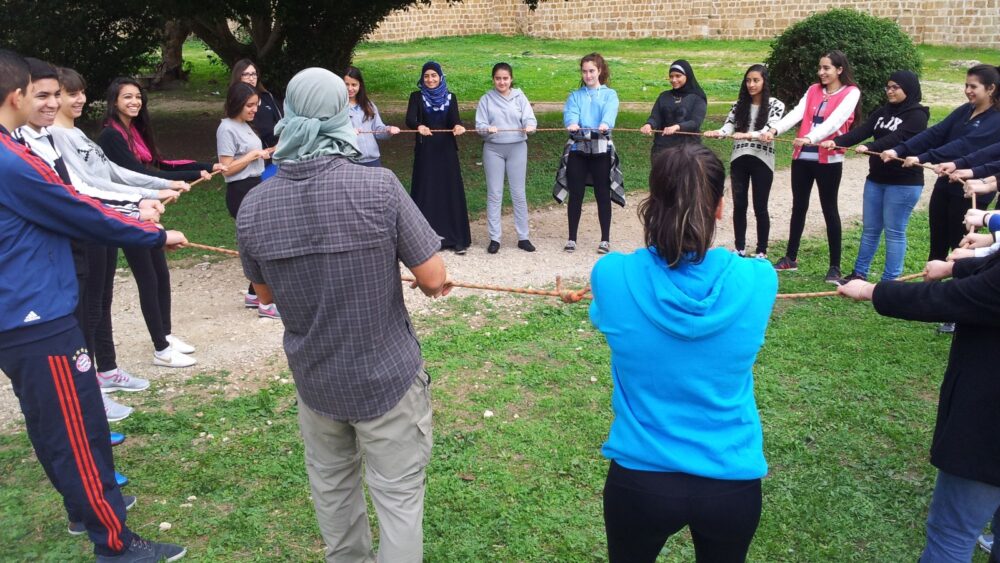 A “circle of trust” exercise in Jerusalem. Photo courtesy of A New Way

Bar, who earned his MBA in the Mandel Social Leadership Program at BGU, observed that people who really believe in a shared society are more committed now, while those who were skeptical before are more skeptical now.

“In September we’ll see the effects more. We are very professional and know how to work with the skeptics,” he says.

“During the events in May, which were terrible, there were also many people doing beautiful gestures for each other that weren’t covered well in the media. So we need to continue our work, expand and reach more people because it’s so critical to change people’s opinions. We want to raise more funds to allow more schools and communities to take part.”

UNCOVER ISRAEL - Get the ISRAEL21c
Weekly Edition free by email
Sign Up Now!
Bring Israel's story to life.
Millions of people around the world rely on us to gain a deeper understanding of Israel. We are the trusted source for original content you won't find anywhere else.
You can make a difference. Donate today to support journalism that brings Israel’s story alive.
SUPPORT ISRAEL21c
Read more on:   Social Action, Coexistence