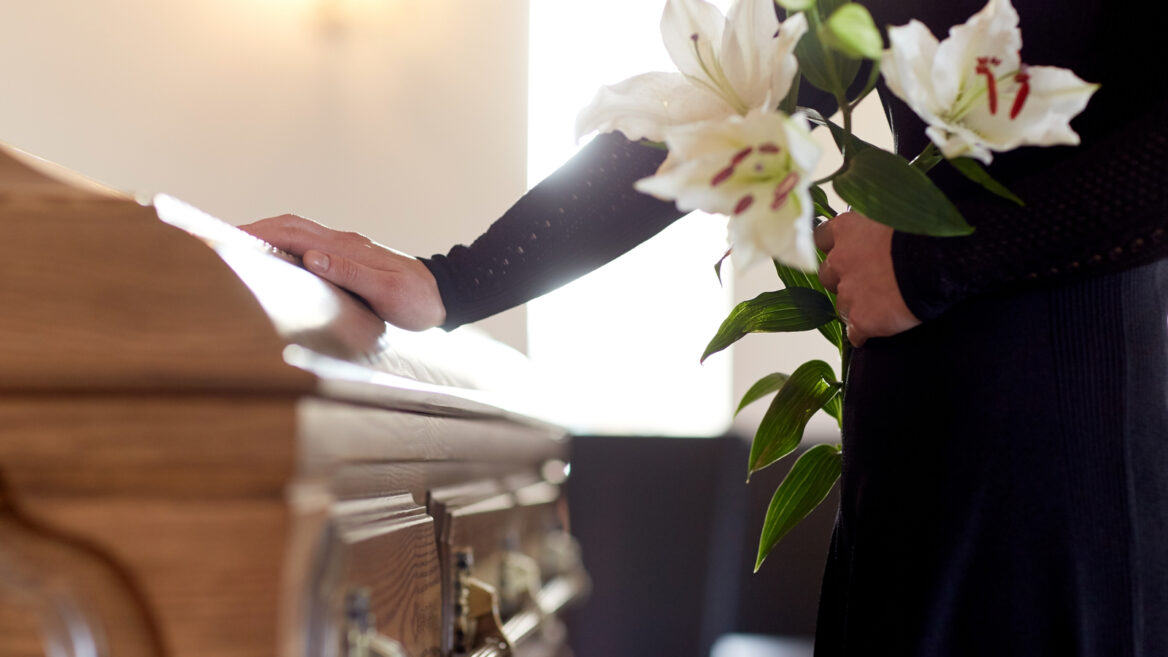 The funeral is often just the start of a long and difficult process. Photo by Shutterstock

“Death is the final consumer sector that has remained neglected from an innovation standpoint,” explains Ron Gura, CEO of Empathy, an Israeli startup whose app recently came out of stealth with a technological approach to the bureaucracy of grief.

The reason is that humans have an aversion to dealing with death, Gura says. “Logistics are made hard by grief, and grief is made hard by logistics.”

How hard are those logistics? After a loved one dies, a family member will spend an average of 570 hours dealing with issues that are often entirely new for the recently bereaved: Arranging a funeral, canceling accounts, clearing out property, hiring movers, claiming benefits, reviewing wills, understanding probate laws and more. 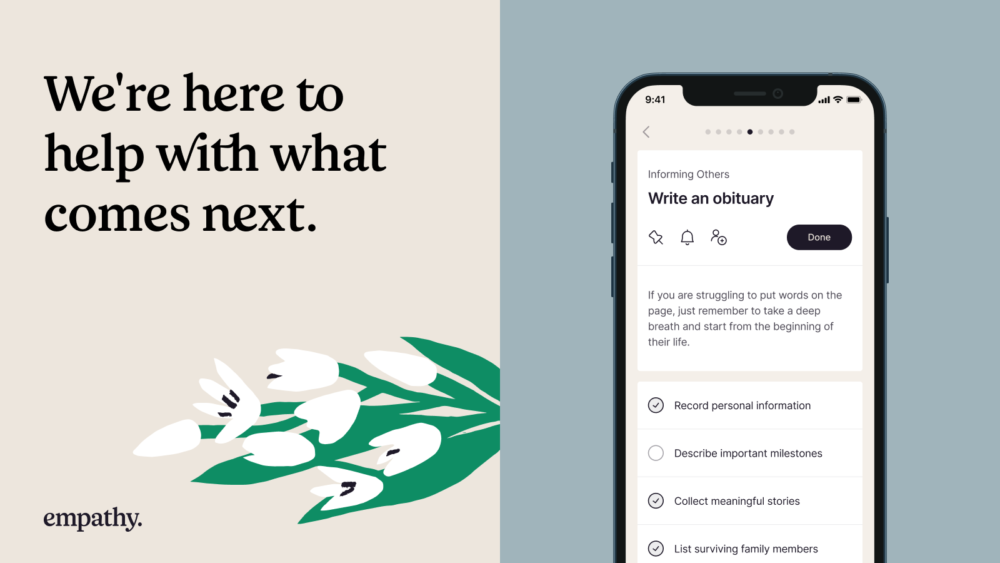 Empathy helps you plan each step after a death in the family. Image courtesy of Empathy

It’s a devastating job that comes when one is at his or her most vulnerable – which also allows unscrupulous vendors to take advantage of the bereaved.

Some three million people die every year in the United States, which is where Empathy is launching first. The company announced funding of $13 million from VCs General Catalyst and Aleph to bring its “GPS for grief” to market. 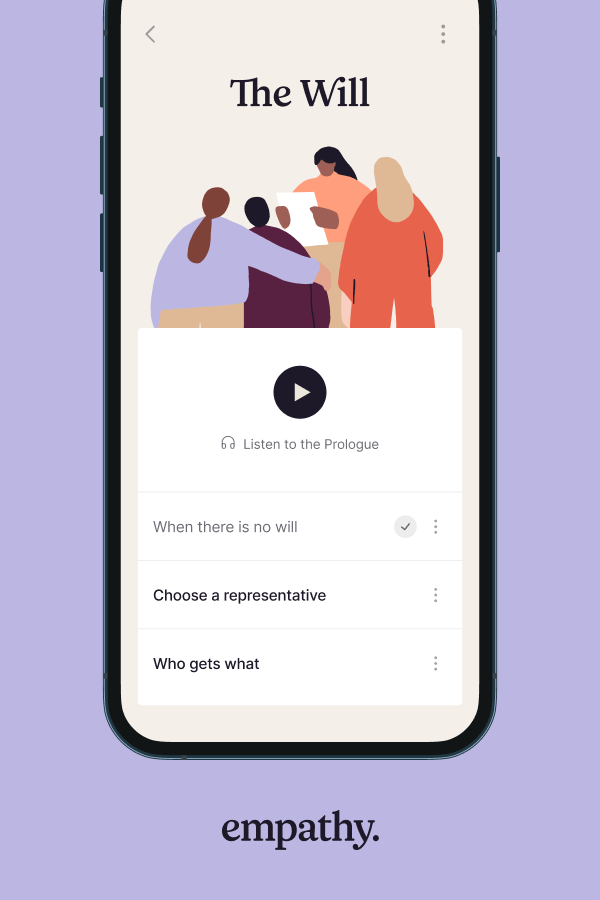 The Empathy app first asks you to fill in details about your circumstances and then guides you through a step-by-step process of everything that needs to be done after a person dies. Dozens of articles and professionally produced audio clips are available (in English) and a help desk manned by real people who can jump in to assist.

“Sometimes the help desk staff can even take on some of the tasks for you,” Gura tells ISRAEL21c. “So, if you can’t seem to cancel your Comcast account, the helpline might say, ‘Let’s call Comcast together now and I’ll stay with you on the line.’” 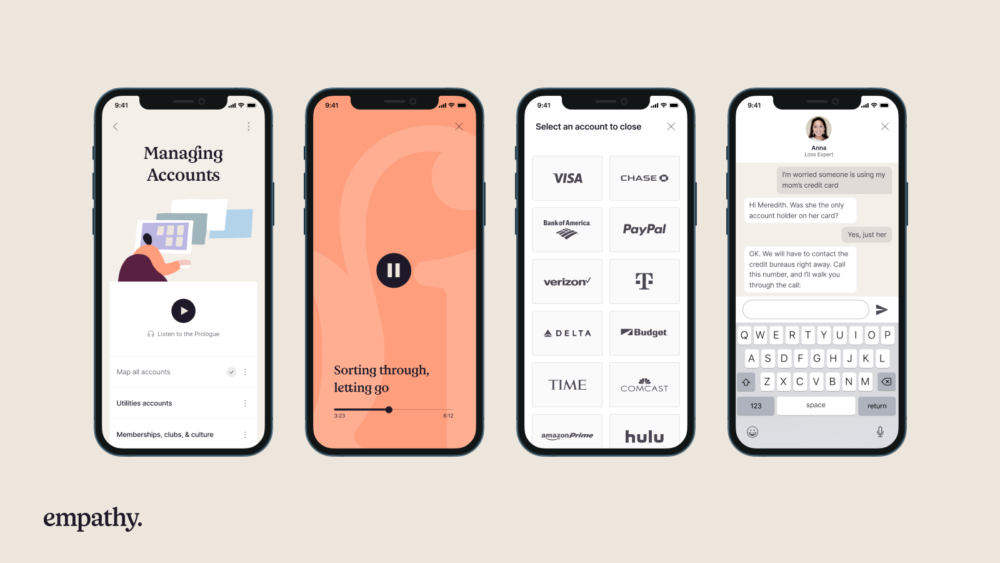 Empathy – either with live help or DIY via the app – aims to help mourners with the piles of paperwork which suddenly become relevant, “so you have more time to be with your family,” Gura says. “We help you stay organized and in control during this overwhelming situation.”

The app assists with pre-filling in the forms you need. Once you’ve entered the necessary data once, it stays in the system, so you don’t have to retype your loved one’s address and Social Security number again and again. And by assembling all the documents you need in one place, “you don’t have to go around and look for things you might be entitled to.” 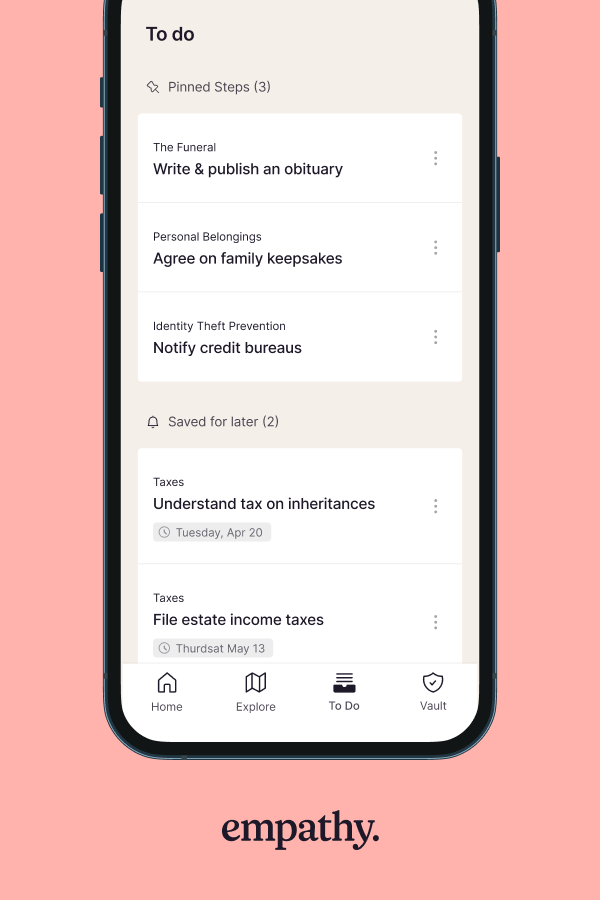 Empathy can help you apply for benefits, halt identity theft, figure out how to shut down social media accounts, make immediate arrangements for burials or cremation, arrange for an obituary in local media, and even inform others about the loss.

For many people, this process can last up to 18 months. Fortunately, the Empathy app doesn’t have an expiration date. The app is free to use for the first 30 days; if you find it valuable, you can pay a one-time charge of $65 to keep it active.

There are no additional fees, no advertising and no selling of personal data to third-party vendors looking to make a buck on your bad news.

“We’re here to offer some relief,” Gura says. “Loss is messy; it’s personal, it’s real. We think that $65 will democratize access to grief support. We’ll be with you at your pace. It’s not about winning but about coping.”

“The end-of-life industry is a large sector that has been untouched by the wave of digital transformation occurring in every other industry,” adds Joel Cutler, managing director of Empathy investor General Catalyst. “Empathy is unique in that it addresses both the emotional and logistical anguish of loss.”

Gura gives the example of how the app can help one get ready to go through a loved one’s belongings. 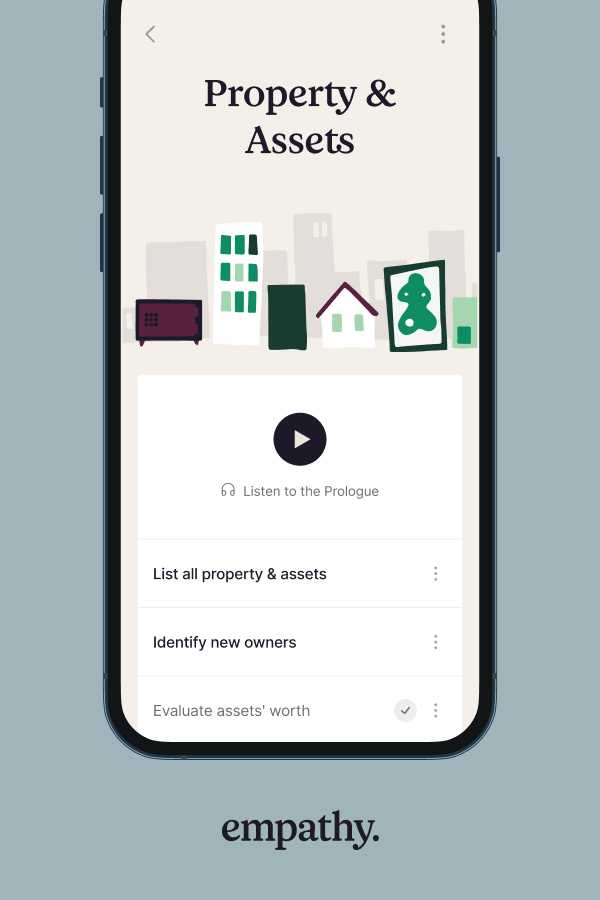 “The app will play a contextual sound bite five minutes before you enter the house for the first time, setting dos and don’ts.”

It will also remind you that everything in the house belongs to the estate until those affairs are settled, although “if your mom says, ‘I want you to have the sliver,’ then you’ll have it.’”

When it comes time to hire a moving company, the app will provide a list of vetted vendors. “We’ll ensure there’s no exploitation,” Gura stresses.

How can an app do this? First of all, with transparency.

“Technology is pretty good at things like price comparison,” Gura notes. “We’ll tell you how much things should cost, what to be worried about, what to expect and point you to the right vendors.”

Another thing technology excels at: automating the process of finding information on the web. All the forms and instructions one needs are out there, but often buried deep in government websites.

Empathy’s web crawlers search the Internet for this information and arrange it logically for users in a straightforward, orderly way. “It’s a lot of information for humans to go through,” Gura says. “But it’s very easy for machines to do that.”

Empathy uses 256-bit encryption and two-factor authentication. Preventing identity theft is a key component of the company’s mission. “Thirty percent of identity theft cases are for bereaved cases,” Gura points out. “Preventing it is best done with automation.”

Empathy has been building its team and technology since August 2020. As of April 6, the product was ready to download and use in the US. Gura expects to expand to other countries in the future. “Loss doesn’t skip anyone,” he says. 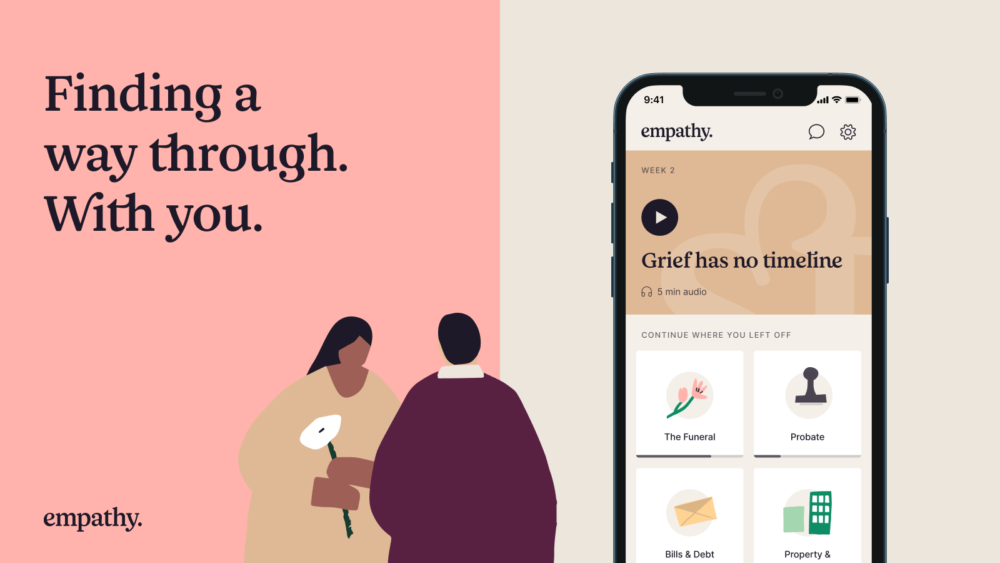 The company has 23 people in its Tel Aviv, New York and Dallas offices. Many of those team members – including Gura’s partner Yonatan Bergman – have been together through several successful startups.

Gura and Bergman previously founded The Gifts Project, which enabled group buying and gifting. The company was acquired by eBay in 2011 for a reported $25 million. Gura became a product director for business incubation at eBay and went on to set up and manage WeWork’s R&D center in Israel.

Gura came up with the idea for Empathy when he was still at eBay. He had a team member who had recently lost his wife.

“Two months later, I realized that he was dealing with it all the time. It shows how little we know what’s going on in the minds of our employees and how much more we can do for them, to shift from sympathy to empathy, from flowers and condolences to services.”

While subsequently working as the Entrepreneur-in-Residence at the Aleph VC, Gura was encouraged by managing partner Michael Eisenberg to move forward with his idea.

Empathy’s app has launched with Covid-19 still raging around the world, and the website contains articles and sound clips addressing the pandemic.

But as Gurapoints out: “Loss is always complex and difficult. It will always be there. There may be a vaccine for Covid-19. There’s no pill or vaccine for despair.”