A bloke in London used his iPhone to upload a snapshot of the city’s Underground via the new Israeli mobile app Pixplit. His friend in New York then added a photo of the subway, and a friend of that friend completed the three-part split with an image of the Milan Metro.

“There are almost 13,000 photo apps on the App Store but ours is the only one that lets you collaborate with others in a visual dialogue,” says Pixplit co-founder Yovav (Jay) Meydad. “A photo typically has one area of content, while on Pixplit it’s divided into two to four parts.”

Based in the heart of Tel Aviv, Pixplit began development in May with angel funding, and officially opened on October 17 when the company was named best new startup at the StartTWS competition in Tel Aviv.

The viral social nature of the cloud-based app is its best selling point. Users create profiles; friends follow each other, commenting on and “liking” each other’s collages. A real-time feed displays completed splits as well as splits with open spaces waiting to be filled by friends — or friends of friends.

“Most users are couch potatoes browsing through content. Creating content is hard,” he says. “But with Pixplit, it’s easy to be an active user. I tap on the ‘join’ button and I’m part of a collaborative effort.” 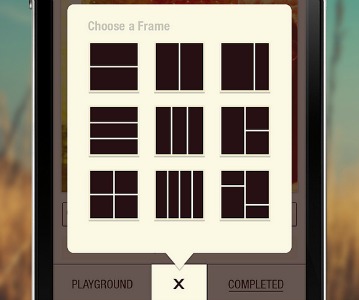 Users can choose from six templates.

Some safeguards are built into the free app to deal with offensive images.

“If the creator of a split isn’t happy about a specific photo, we provide a mechanism to delete it,” assures Meydad. “We also have a mechanism to report usage of copyrighted materials and will delete that split. We want to keep Pixplit a safe place to collaborate.”

Once a critical mass of users is on board, Meydad and co-founders Nir Holtzman Ninio and Adi Binder plan to present a new social marketing strategy to corporate brand managers. The idea is that every few splits in each user’s feed would be sponsored ones, roughly matched to age, gender and location.

“We have communicated with top ad agencies and they just love this new form of engagement,” says Meydad.

The current brand engagement opportunities that social networks provide are weak, he adds, because they’re limited to likes, tweets or retweets.

Using Pixplit, a brand such as Coca-Cola could begin a split with its logo in one slot. Friends could then add relevant photos from their personal gallery, perhaps someone holding a six-pack of Coke or placing a flower in a Coke bottle.

“It’s like a tree adding leaves,” Meydad says, enabling brands and users to create campaigns together.

Born of a romantic notion

Pixplit came out of a brainstorming session among its founders, all good friends. Meydad and Holtzman Ninio were then running Hitpad, a top iPad news app. Binder, an award-winning design consultant, was senior user interface designer at LivePerson.

“At some point, Nir and I said, ‘Hitpad is nice, but it’s not growing to tens of millions of users. We need a service where virality is in its DNA,’” Meydad recalls. 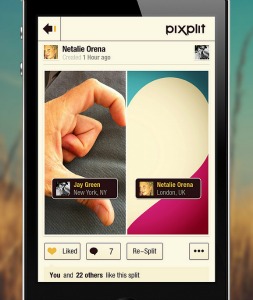 Binder told them that for his senior project at Shenkar College of Engineering and Design, he’d conceived of an app for couples to share chat, video, messaging and co-created photos. Meydad, who once worked at a US company that runs 30 online dating sites, saw the potential to expand co-created photos way beyond couples.

So he and Holtzman Ninio split from Hitpad to start Pixplit. (“Hitpad is running on autopilot,” he assures ISRAEL21c. “The server and app are alive but don’t require maintenance.”)

Meydad is CEO, Binder is director of product and design, and Holtzman is CTO.  An Android version of the app is in development and expected to be released early in 2013. Nine template styles are offered and about 40 more are ready to go, perhaps to be part of a premium package. The main app is a free download.

Clearly, the pals are having a grand time.

“We’re on Rothschild Boulevard, one of the coolest places for startups right now,” says Meydad, who lives on a moshav (cooperative village) with his wife and three sons, and commutes to work by train and Tel-O-Fun rental bike.