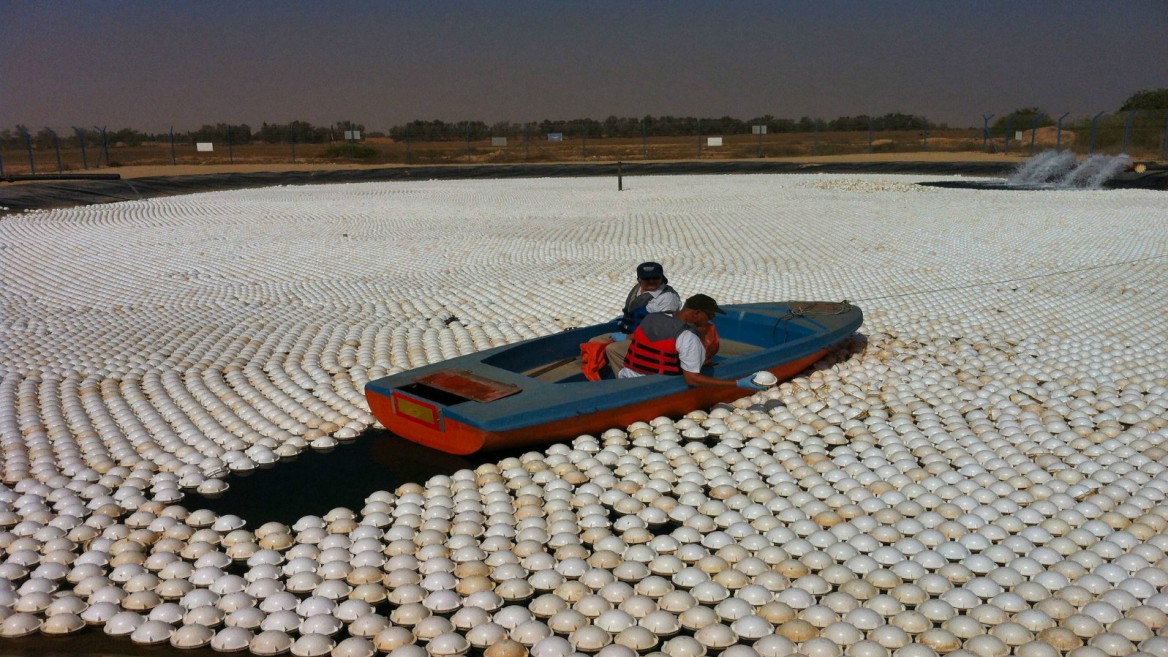 These aren’t ordinary plastic balls. They do much more than shade the water. Photo courtesy NeoTop Water Systems

The hypnotic video footage of millions of black plastic “shade balls” rolling into Los Angeles’s reservoirs has mesmerized the world.

It has also sparked a tidal wave of interest in NeoTop Water Systems, an Israeli startup that has scientifically proven that its patented spheres – designed to be job-specific as opposed to the balls California has so far deployed — decrease evaporation of reservoirs, save precious water and reduce growth of algae to preserve a healthy ecosystem.

The Israeli company’s second-generation product is set to be unveiled at the upcoming WATEC Israel 2015 international exhibition of water technologies, October 13-15 at the Tel Aviv Fairgrounds.

“Our product is very different from other solutions,” Noam Levy, CEO NeoTop Water Systems (formerly Top-It-Up), tells ISRAEL21c. “Our spheres have a sophisticated design and they’re the only system now on the market that cools the water.”

Like the LA shade balls, the Israeli floating spheres block sunlight. But thanks to their ability to act as mini cooling towers, they also reduce surface temperatures, algae and evaporation by up to 94 percent.

And that figure is not just a random guess. NeoTop’s balls have undergone extensive testing by Mekorot, Israel’s national water company. The Israeli team has been researching and developing the innovative product since 2011. Zeev Birger, founder and CTO of the company, won the Israeli Prime Minister’s Award for Entrepreneurship & Innovation in 2014 for his TopUp Ball System.

“We are just starting to market in Israel, the UK, Australia and the US,” says Levy. “In the US market, we’re aiming mainly for California.”

Up to 50 percent of water in reservoirs is lost to evaporation, according to NeoTop’s research. But the increase in water salinity that results from evaporation can be even more troublesome because the water can become unusable. Not to mention the growth of harmful algae, which clog pipes.

NeoTop balls are bigger than the shade balls now in the headlines and do not need to be filled with water ahead of time. In fact, the use of the reservoir’s water is a crucial part of the Israeli solution to better water quality.

The Top-Up ball has special rims and an inner float, as well as holes around its equator, at the top and bottom. The balls are tipped into a reservoir and fill up exactly half way – half the sphere is submerged and the other half is in the air.

There is no standing water in these spheres, as new water is constantly entering. This process creates thermal distillation, which kills parasites and enhances water quality.

Meanwhile, the spheres also lower water temperatures by up to six degrees Celsius. Here’s how it works: Air in the top half of the sphere is released from the upper holes and creates a difference in pressure between the two halves, allowing for a flow of cooler air from the side openings. The cooling effect reduces the temperature of the water in the ball and the water in the reservoir.

Levy says the water in the submerged part of the NeoTop sphere also acts as counterweight against wind.

The Ramat Hasharon company’s technology is also being used as a solution for the aquaculture industry for fish farming, aquariums and microalgae cultivation. The bobbing balls protect fish from birds.

In addition to drought problems, open-water reservoirs and ponds near airports are known as significant hazards to airplanes. Aviation authorities everywhere require these water sources to be covered to help eliminate bird strikes and ensure flight safety.

Bird strikes cause some $400 million in annual damages to aircraft in the US and nearly $1.2 billion to commercial aircraft globally.

The Israeli system has been approved as a bird deterrent by the Israel Air Force and by world-renowned ornithologists.
Israeli water-tech in California

Israeli companies are assisting Californians with new groundwater flow systems, seawater desalination plants and better farming  methods in an attempt to lessen the effects of the state’s severe drought.

And that’s not all. The upcoming WATEC conference in Tel Aviv will host a major session on Israeli cooperation with California, which has been in an official state of drought emergency since January last year.

NeoTop Water Systems is one of 60 Israeli water-tech companies on the exhibitors’ list at the WATEC conference.

“We’re launching the second generation of the product and there’s no doubt that it will do the job even better,” says Levy.

UNCOVER ISRAEL - Get the ISRAEL21c
Weekly Edition free by email
Sign Up Now!
Bring Israel's story to life.
Millions of people around the world rely on us to gain a deeper understanding of Israel. We are the trusted source for original content you won't find anywhere else.
You can make a difference. Donate today to support journalism that brings Israel’s story alive.
SUPPORT ISRAEL21c
Read more on:   Environment, Technology, NeoTop Water Systems, Watec, Water tech