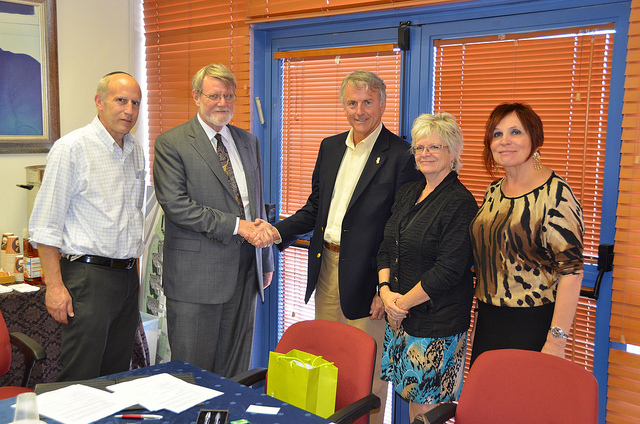 A planned medical center in Vaughan, Ontario, may install a futuristic Israeli parking system. And the Toronto
suburb’s 8,000 kilometers of roads may be illuminated more inexpensively
by innovative lighting from an Israeli company.

These and dozens of other possible cooperative
ventures are the fruit of a 23-person business and academic delegation to Israel this October.

“Our city is fast-growing – for seven of the last 10 years we’ve
done over a billion dollars of construction – so we’re coming to
Israel as part of our economic development plan, which identified China,
Italy and Israel as strategic partners,” he added.

“As a looking-forward city, we need to connect with the most forward-looking
country, and that’s Israel.”

Led by Vaughan Mayor Maurizio Bevilacqua, the mission followed up on a previous trip laying the groundwork for industrial
and academic R&D cooperation as well as joint ventures between Israeli
firms and Vaughan’s 9,900 businesses.

Participants set up 175 meetings and signed a flurry of memorandums of understanding (MOUs),
including several with Israeli colleges such as the Jerusalem College
of Technology (JCT), where ISRAEL21c attended a presentation by the
Canadians to 100 members of the Jerusalem Business Networking Forum.

Set up shop in Tel Aviv

The October mission included representatives of 21 companies, as well
as Centennial College and York University.

“We identified opportunities for them in Israel and arranged conference
calls beforehand so they could progress a lot faster with potential
partners once we got here.”

Underlining Shefman’s assertion that the
city is “very, very serious” about going forward with Israeli collaborations,
Vaughan has established a development office in Tel Aviv to facilitate all future partnerships.

“I think next year we can bring double or triple the number of people
to Israel,” predicted City Councillor Tony Carella. “Our ultimate
goal is have [the Israelis see] Vaughan as a gateway to the North American
market.”

“We’re seeing some Israeli companies buying or partnering with Canadian
companies to gain a market foothold in North America, such as Amiad for water technology,” Potter said. “But we’re not focused
on one particular sector. They have product, innovation and technology
here that is second to none.”

Centennial College – encompassing eight schools across five campuses
– announced that in addition to JCT, MOUs were signed with academic
institutions including Ben-Gurion University of the Negev, Hadassah
Academic College of Jerusalem and the College of Law and Business in
Ramat Gan. Discussions also were held with Tel-Hai College, the Technion-Israel
Institute of Technology, the University of Haifa and Magen David Adom
(the Israeli emergency response system) to explore possible joint projects.

One of the areas of cooperation will be based on Israel’s experience in integrating immigrant and disadvantaged
populations into institutions of higher learning, according to Centennial’s
CFO and Vice President for Development Brad Chapman.

“We have lots of new immigrants just as Israel does, and we need
to learn how to absorb them and make them successful,” Chapman said.

In addition, Hershkowitz told ISRAEL21c, “We have various areas of research we can share
and areas of cooperation in business. We have projects in road safety,
communications, public health and biotech that can be developed going
down the road.”

Avi Kay, head of JCT’s Shuman Center for Entrepreneurship, pointed out
that more than 60 startups have been launched by graduates of the 40-year-old
college for religious men and women — including NDS, acquired by Cisco
last year for $5 billion.

“Colleges have taken a new role in Canada in filling the innovation
gap,” Centennial College Director of International Education Virginia
Macchiavello told the business forum. “So we’re here to do business
with you.”

Reciprocal visits from Israeli business delegations already are under way.

UNCOVER ISRAEL - Get the ISRAEL21c
Weekly Edition free by email
Sign Up Now!
Bring Israel's story to life.
Millions of people around the world rely on us to gain a deeper understanding of Israel. We are the trusted source for original content you won't find anywhere else.
You can make a difference. Donate today to support journalism that brings Israel’s story alive.
SUPPORT ISRAEL21c
Read more on:   Innovation, Tel Aviv, Technology, israeli delegation