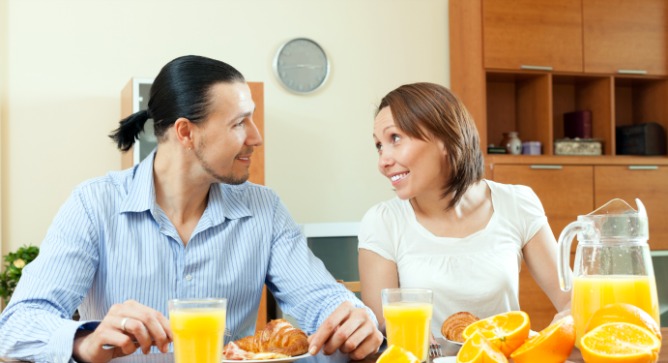 If you have trouble conceiving because of PCOS, try eating a heartier breakfast. Image via Shutterstock.com

Your mother always told you to eat a good breakfast for optimum energy to start your day. Now, Israeli researchers have found that eating more calories in the morning can also help you start a baby.

A big breakfast was shown to increase fertility among women who suffer from menstrual irregularities, in a study conducted by Prof. Oren Froy, director of the Nutrigenomics and Functional Foods Research Center at the Robert H. Smith Faculty of Agriculture, Food and Environment of the Hebrew University; and Ma’ayan Barnea, Prof. Daniela Jocabovitz and Dr. Julio Weinstein from Tel Aviv University and Wolfson Medical Center.

“The research clearly demonstrates that indeed the amount of calories we consume daily is very important, but the timing as to when we consume them is even more important,” said Froy.

The Israeli study, published last May in the journal Clinical Science, specifically examined whether timing of meals has an impact on the health of women whose menstrual irregularities are due to polycystic ovary syndrome (PCOS).

PCOS affects approximately 6-10 percent of women of reproductive age, causing insulin resistance and an increase in male sex hormones (androgens), which lead to fertility problems among other health issues.

Sixty women from the ages of 25 to 39 took part in the experiment over three months at Wolfson Medical Center in Holon, just south of Tel Aviv. Each participant was of slender build, with a body mass index of less than 23, and suffered from PCOS. Researchers wanted to see how the schedule of participants’ calorie intake might affect their insulin resistance and levels of androgens.

The most significant result, in terms of fertility, was a much higher rate of ovulation within the breakfast group compared to the dinner group.

The bottom line: Eating a hearty breakfast can help boost fertility in women with PCOS.

UNCOVER ISRAEL - Get the ISRAEL21c
Weekly Edition free by email
Sign Up Now!
Bring Israel's story to life.
Millions of people around the world rely on us to gain a deeper understanding of Israel. We are the trusted source for original content you won't find anywhere else.
You can make a difference. Donate today to support journalism that brings Israel’s story alive.
SUPPORT ISRAEL21c
Read more on:   PCOS, polycystic ovary syndrome, fertility, breakfast, nutrition, Living, Research, Health