Israeli media and social networks are abuzz with news of diva Barbra Streisand’s arrival for the Israeli Presidential Conference. The Jewish-American singer – who arrived with her pet coton de Tulear pooch– is in town for the high profile conference that is marking the 90th birthday of President Shimon Peres. 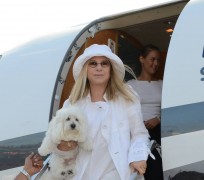 Barbra Streisand arrives in Israel. (Photo courtesy of Nidar Oz Facebook page)
“Facing Tomorrow” – the fifth Israeli Presidential Conference under the auspices of President Peres – will take place in Jerusalem on June 18-20. A who’s who of world leaders, entertainers, scientists, artists and other dignitaries will attend the Conference that looks at the central issues that will influence the face of our future: geopolitics, economics, society, environment, culture, identity, education, and new media.

Streisand, who visited the Western Wall first thing after checking in to her Jerusalem hotel, will perform two sold-out concerts in Tel Aviv later this week. The Tony Award recipient received an honorary Doctor of Philosophy degree from the Hebrew University of Jerusalem during the 76th Hebrew University International Board of Governors Meeting.

The honorary doctorate is being presented to the 71-year-old Babs in recognition of “her professional achievements, outstanding humanitarianism, leadership in the realm of human and civil rights, and dedication to Israel and the Jewish people.”

“Barbra Streisand’s transcendent talent is matched by her passionate concern for equality and opportunity for people of every gender and background,” professor Menahem Ben-Sasson, president of the Hebrew University, said in a statement. “Equally important, her love of Israel and her Jewish heritage are reflected in so many aspects of her life and career. We are deeply proud to honor an individual who exemplifies these values which we at the Hebrew University share and uphold.”

At the ceremony, Streisand praised the university and said the world could use more academic institutions of its kind.

“One of the things I’ve always admired about this university is the fact that here, women and men, Jews and Arabs, Christians and Muslims, native-born and immigrants, sit together in classes, share the same cafeterias, learn from the same professors, and dream together of a good and meaningful life,” she said. “I wish the world were more like the hallways of the Hebrew University.”

Streisand has another connection to the university — in 1984, the singer established the Emanuel Streisand Building in memory of her beloved father, whom she praised at the time as “a teacher, scholar and religious man who devoted himself to education.”

“I think he would be very proud to know that this esteemed institution is honoring his daughter,” she said at the ceremony.

Festivities for the president’s birthday kick off tonight with a 45-minute speech by Bill Clinton at the Peres Academic Center in Rehovot.