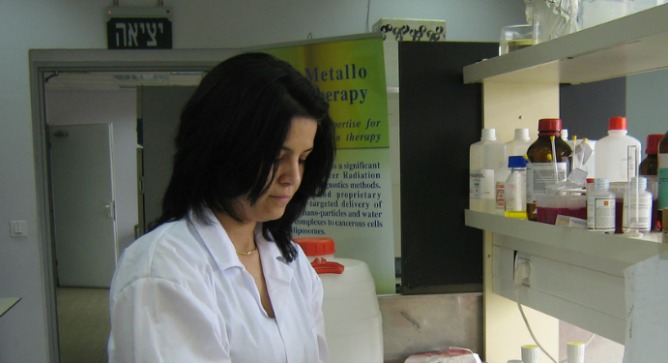 Amal Ayoub is both the CEO and CTO of Metallo Therapy.

Arab-Israeli scientist Amal Ayoub is going for the gold –not aiming for a medal in an Olympic sport, but to help cure cancer.

“Gold is a big atom containing a lot of electrons,” she explains to ISRAEL21c. “Under radiation it can absorb the rays better than smaller atoms can, and its electrons can emit secondary radiation efficient in destroying the cancer cells.”

Working with two Arab-Israeli employees – a male chemical engineer with a degree from the Technion-Israel Institute of Technology, and a female biologist – Ayoub is perfecting a method to produce the gold nanoparticles efficiently on an industrial scale, and has developed a molecule to coat them so that they do not cause toxic interactions with body tissues.

Isn’t gold a very expensive material to work with? “Yes, but since we are talking about very small amounts — a couple of milligrams — the price is not an issue,” she explains. “It’s the same cost as developing any other drug.”

So far, she’s done all this with three years’ worth of funding provided by the Israeli Chief Scientist’s Office through the NGT Technology Incubator in Nazareth, the only applied sciences company devoted specifically to the Arab-Israeli community’s scientific, technological and entrepreneurial potential.

“They are waiting for results before deciding if they’ll invest more,” relates Ayoub, who is the company’s chief executive and chief technology officer. “We are now fine-tuning [in the lab], and at some point in a couple of months we will move on to more in-vivo studies when we know the exact amounts and concentrations to use.”

Arkin Holdings’ Pini Orbach stated: “We decided to invest in Metallo Therapy because we believe it has innovative technology for treating cancer, excellent basic science and management with the necessary skills. We also believe that the Arab community has much talent in the life sciences, and that investments of this kind will help promote Jewish-Arab cooperation in various fields.”

From an average family

Ayoub, 36, told the Israeli business daily Globes that her company has “a long, complicated, and expensive way to go to reach market,” but this is not a woman who is easily discouraged.

Growing up in Nazareth, she took an early interest in physics and earned her bachelor’s degree at the Technion.

“There were difficulties since I studied in an average high school and come from a very average family,” she says. “When I went to university I had to face the fact that I did not know enough Hebrew or English to manage, but quickly I succeeded in overcoming this obstacle. The other issue was money. My parents could not fund my education, so I had to work.”

Nevertheless, she went on to earn a master’s degree and a doctorate in biomedical engineering at Ben-Gurion University of the Negev, and finished her post-doctorate there as well.

“At Ben-Gurion we developed a new radioisotope for radiation therapy, and methods to introduce heavy metals into cancer cells to enhance radiation therapy,” she says. “I did this for 10 years, so I have a lot of experience in this field.”

She had no problem convincing NGT to take on Metallo Therapy as a portfolio company. “They were excited about me and about the idea,” she says. “I didn’t have difficulties convincing them there is great potential in this technology.”

While Ayoub understands she may be a role model for other Arab-Israeli women with a passion for science, her immediate concern is to put her company on the map so she can get her gold nanoparticles to the cancer patients who need them most.