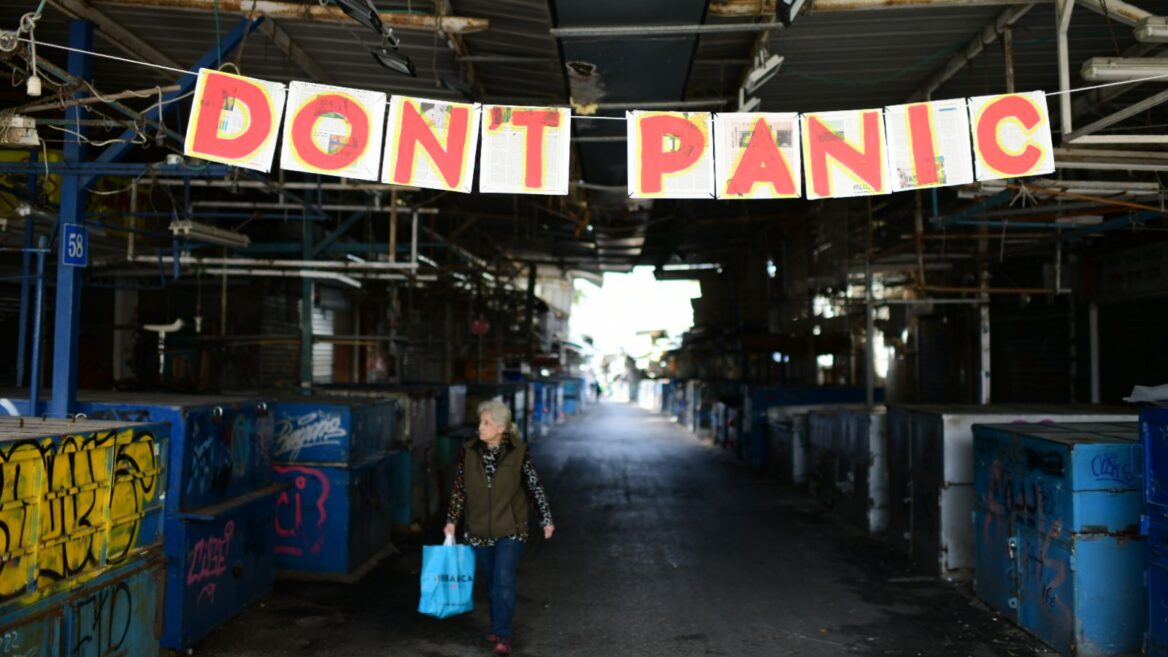 A message of hope decorates the empty Carmel Market in Tel Aviv. Photo by Tomer Neuberg/Flash90

Like people in many other countries, Israelis are getting used to a new reality courtesy of COVID-19. People are quarantining themselves at home, as schools, restaurants, culture institutions and businesses have been shuttered.

These challenging times offer many opportunities for kind deeds. Whether making sure hard-working doctors get a hot meal, reaching out to people stuck in quarantine, volunteering to test blood samples or performing living-room concerts – Israelis are coming to one another’s aid.

Now that almost everyone is confined to home, social media is a main venue for doing good. One example is the Facebook group Quarantine Aid – Israel, which numbers more than 1,000 members.

“The group is aimed at people who are in quarantine, people in at-risk groups (elderly and immune-compromised), and people who are not in isolation. The idea was to connect those two groups of people, with those not in quarantine assisting those who are,” explains Tel Aviv University student Amanda Govrin, one of the group’s admins.

“I got the idea for the group after talking with some friends about how people in quarantine need to rely on food deliveries and takeout, which has so much excess packaging. I thought that if people not in quarantine could help make deliveries, that would help solve the dilemma for those who needed food but wanted to avoid packaging waste,” she says.

“The response has been absolutely amazing. I was so shocked to see how quickly the group grew. Most of the posts in the first few days were people offering help. It was heart-warming to see so many people offering their time to help others who are homebound,” Govrin adds. “One of my favorite exchanges so far was when a lone soldier stuck in quarantine asked for help and immediately people commented offering to help and shared the post over 20 times.”

Another community resonating on Facebook is “Reut Buy It For Me,” which normally shares insider info about hot online deals. It gave out such a fabulous shout-out to a local business suffering from the corona crisis that it helped it attract more customers and even caught the eye of Facebook COO Sheryl Sandberg.

The Birthright Excel Community cooperated with MIT and the 8200 Alumni Association in a “HackCorona” virtual hackathon on March 19-20. Some 150 participants including software developers, designers and computer programmers came up with ideas for working remotely, reaching out to vulnerable communities and enabling distance learning in a virtual education system. 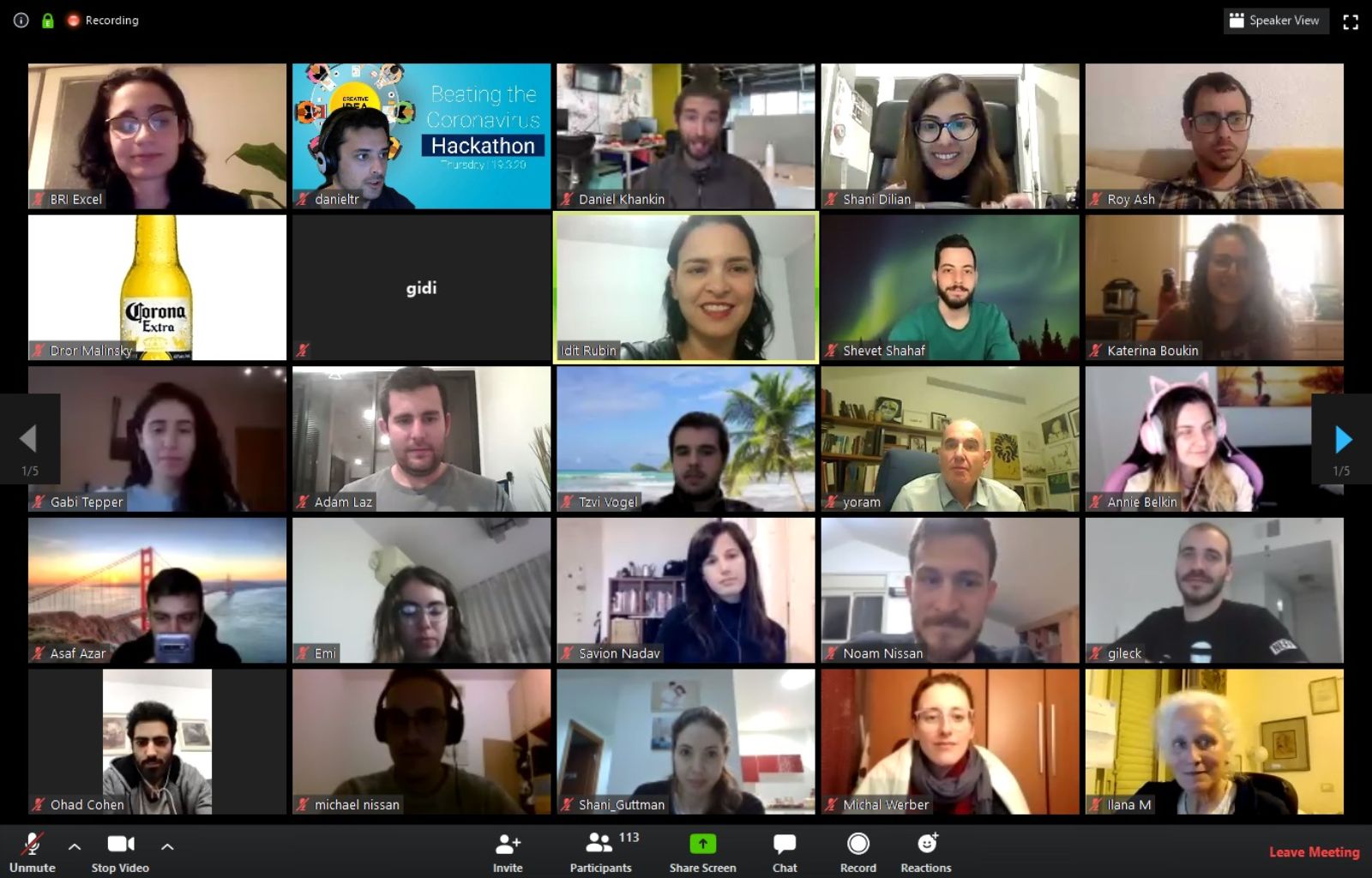 More than 100 Ben-Gurion University scientists and graduate students have been working in shifts since last week to test blood samples to see if they contain the coronavirus. The drive was organized by PhD student Avishay Edri, who in regular times specializes in Ebola.

“Ever since the outbreak of the coronavirus, I have been following what is going on around the world and in Israel. If I can help, I think it is my civic duty to do so,” Edri says.

“When I realized that the situation was critical and that the rate of processing blood samples was slowing because of a personnel shortage, I proposed enlisting volunteers with the right training from BGU to find as many carriers as possible and isolate them. I am pleased that so many have joined the effort.” 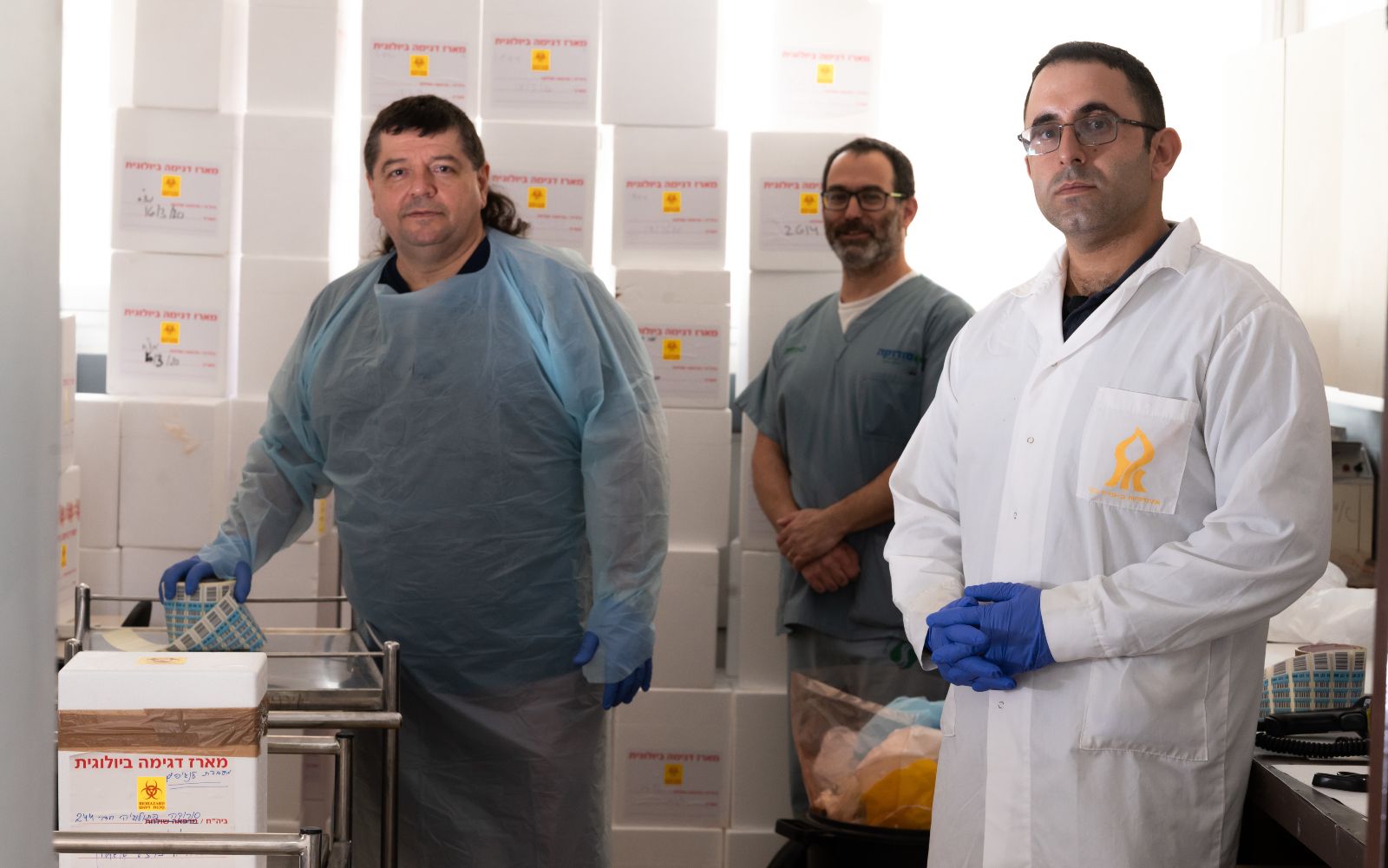 “Dozens of volunteers have already joined MDA medics in collecting test samples this week, and some have even started to carry out the tests themselves,” says Tel Aviv University’s Prof. Carmit Levy, who is involved in the initiative.

Families coming to MDA and Health Ministry-run “Drive and Test” compounds for coronavirus testing are going home with gift sets containing boredom-relieving games. The sets are packaged by people with special needs at Tsoomi and donated by Intel. Intel will provide additional game sets to patients quarantined at Tel Aviv’s Dan Panorama Hotel. 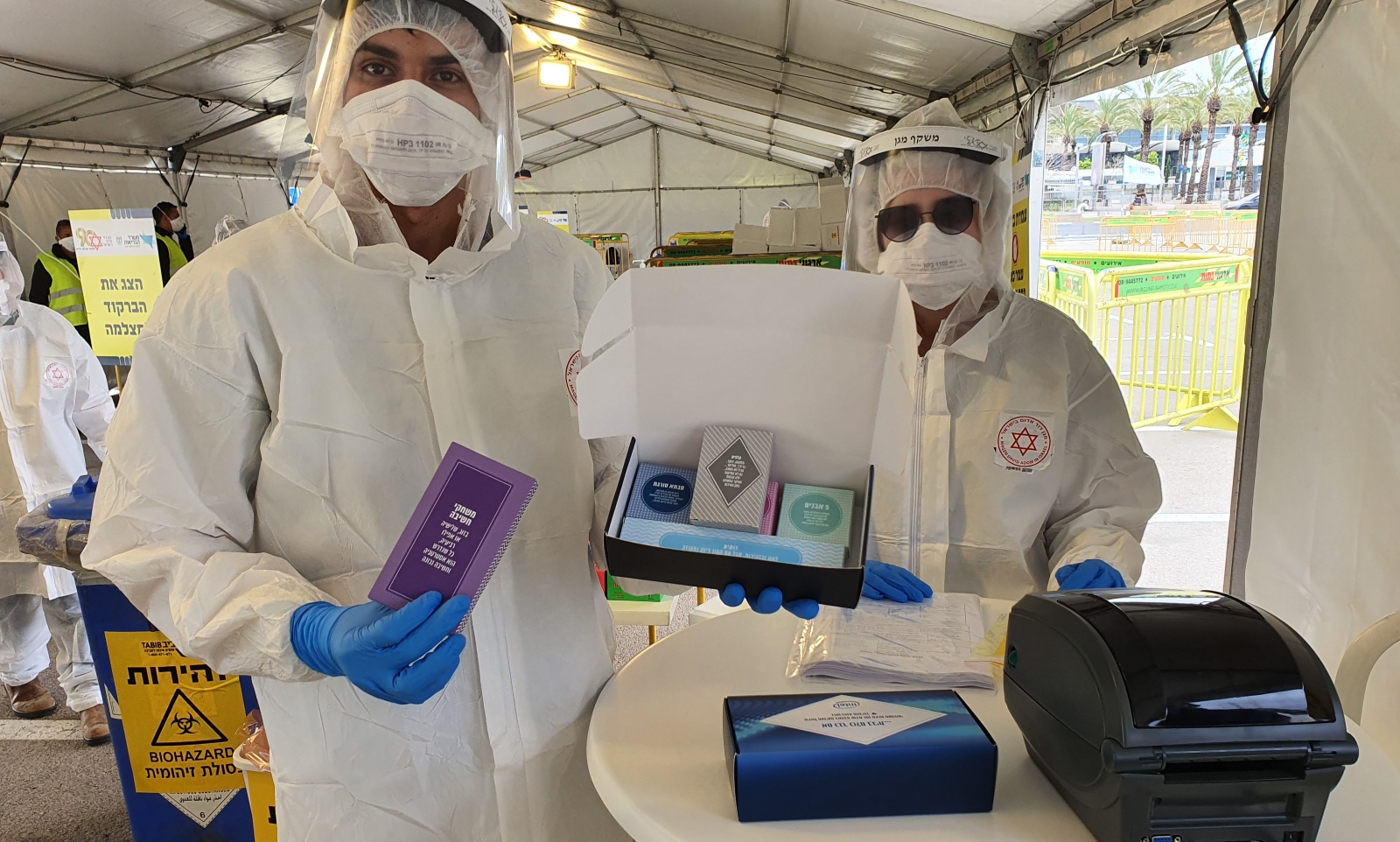 Yad Sarah, the volunteer organization that provides equipment and services for people coping with disabilities, aging and illness, set up a “Corona Line.”

People in quarantine, and the elderly and homebound, can call this hotline to arrange for medical equipment to be delivered to their doorstep.

“There was an 80-year-old woman who regularly uses Yad Sarah oxygen,” says the organization’s spokesperson, Beni Cohen. “Her oxygen tank ran out, and no one she called wanted to bring her a new one because everyone was afraid to become infected or to infect her.”

She turned to Yad Sarah, and within two hours a driver wearing protective gear left one at her doorstep. “She was so moved by the fact that they managed to bring her the equipment so quickly,” Cohen tells ISRAEL21c. 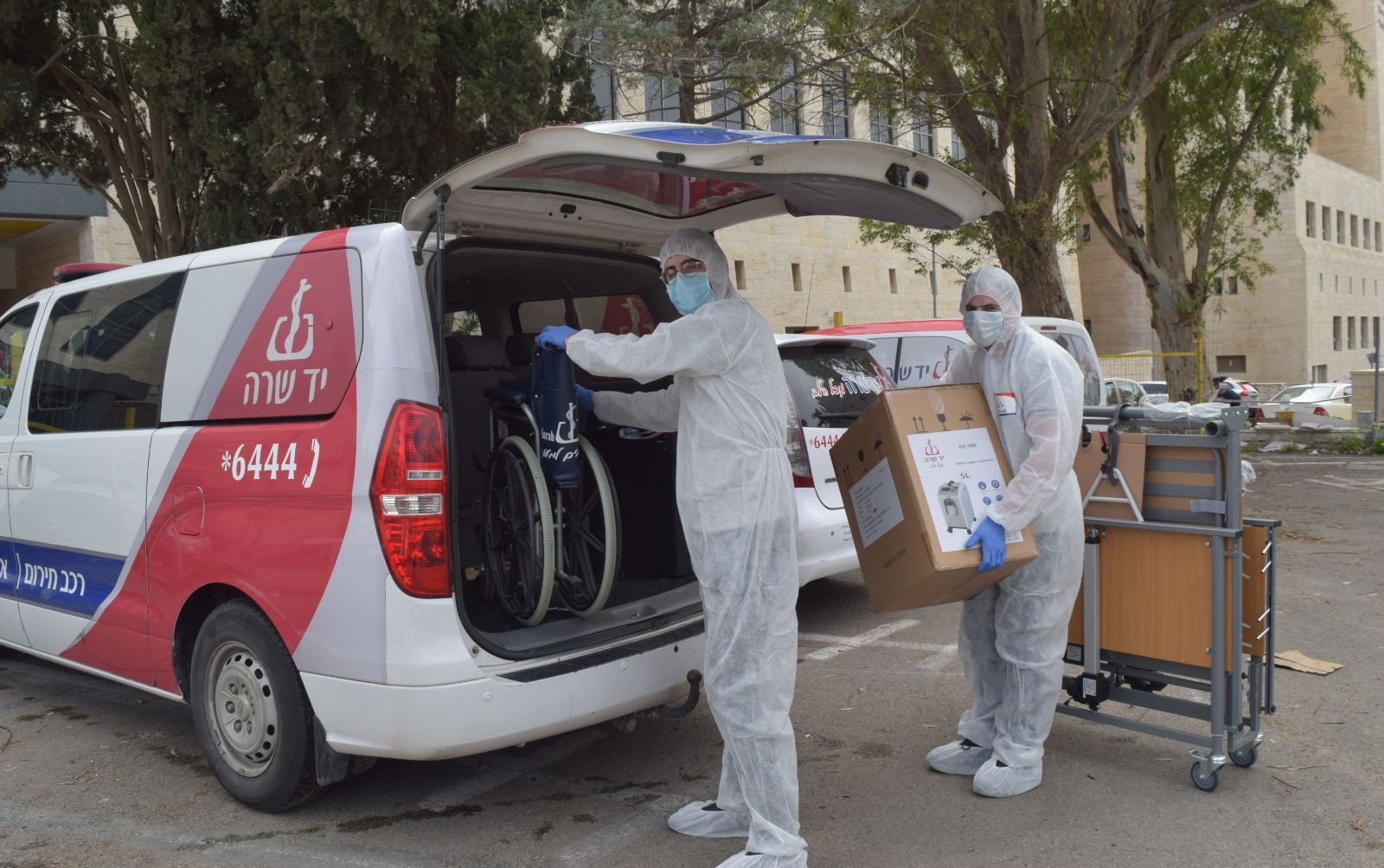 Yad Sarah personnel suit up in protective gear to supply those quarantined at home with the medical supplies and services they require. Photo: courtesy

This being Israel, outreach and kindness efforts of course include food. And lots of it.

McDonald’s, for example, has closed all its branches across the country. But five McDonald’s locations remain open to dish out free meals for hospitals, first responders and security forces, who must be delighted to get a burger and fries at the end of their long shifts.

Online gaming mega-company Playtika announced that with its employees working from home according to regulations, it would not cancel its on-site lunches but rather pack the food into 1,000 baskets to be distributed through nonprofits. The generous move not only aids those at risk, but also helps the catering company stay in business.

Leket, Israel’s national food recovery program, recently home-delivered a week’s worth of prepared meals to 2,500 of Israel’s housebound elderly. The meals were prepared by Northern Food Catering, enabling them to recall employees laid off due to the economic slowdown. Leket is also starting to deliver fresh produce to needy families.

Mobileye, one of the most successful companies in Israel, established a $2.8 million fund for organizations that aid the Israeli public and economy “in support of activities that help stabilize the economy and maintain the strength of the entire Israeli public.”

While ordinary citizens can’t establish multimillion-shekel funds, they came out in droves on their balconies last week to show appreciation to Israel’s doctors, nurses, EMTs and other healthcare personnel on the frontlines.

Healthcare workers are also getting the credit they deserve in other ways too. Fancy boutique hotel, Brown TLV Hotel has given over 30 rooms for healthcare workers – from doctors to sanitation workers – who are required to spend a couple of weeks in isolation after being exposed to COVID-19. Because they really deserve to rest and get better in style.

The world entertainment industry has also kept busy reaching out to everyone stuck at home.

Israeli singer and superstar Idan Raichel, for example,live-streamed a concert from his living room that was watched by more than 400,000 people around the world.

“The Tel Aviv streets are very, very quiet … but we’re going to make some noise all over the world,” Raichel said. “To feel today that we are all as one.”

Raichel also appeared on “The Show Must Go On,” a cooperative venture of music clubs network Zappa and broadcaster Keshet. Each evening’s audience-free livestreamed show features a lineup of prominent Israeli artists. Shiri Maimon, Sarit Hadad and the Shalva Band have been among the headliners.

The Jerusalem Street Orchestra, which usually plays classical music in open-air public spaces, made a home edition of their always fantastic work, providing a real balm for the soul.