Way back in Roman times, chariot racing was a box-office hit in the Mediterranean town of Caesarea. While that particular pastime isn’t drawing crowds anymore, it set the tone for millennia later, when Caesarea is still one of Israel’s premier leisure spots.

True, you don’t have to come all the way to northern Israel to play golf, even if it is on the new Pete Dye-designed 18-hole course opened two years ago. But what other golfing and diving resort also offers a range of land and sea archeological treasures? For that, this upscale town halfway between Tel Aviv and Haifa is a prime destination. Before diving in or teeing off in the modern part of the city, get acquainted with history at Old Caesarea’s Time Tower, a renovated fortress overlooking the ancient Roman aqueduct and restored harbor built by King Herod’s laborers in homage to Augustus Caesar more than 2,000 years ago.

Voyage in Time, a 10-minute 3D big-screen movie, takes viewers from the Herodian period through the Roman, Byzantine, Arab and Crusader eras, and finally through the early days of Zionist immigration.

Caesarea’s ancient Roman aqueduct and amphitheater, the oldest surviving Roman theater in the eastern Mediterranean region, provide the setting for a world-class Jazz Festival every June. The harbor is dotted with restaurants, cafes, art galleries and nightlife.

Aqueduct (Arches) Beach, one of Israel’s most picturesque beaches, is punctuated by the ruins of a raised aqueduct built by Herod and expanded 300 years later to bring running water to Caesarea from a spring at the foot of Mount Carmel. 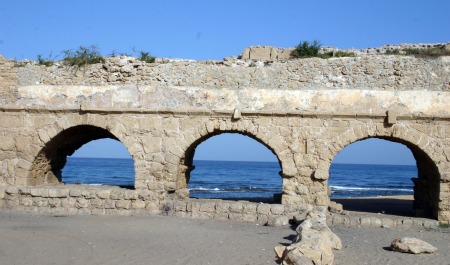 Now back to the sports part of the program.

There’s nothing else in the world rivaling Caesarea’s all-seasons Underwater Archeological Park. Leah Schneider of the Caesarea Development Corporation tells ISRAEL21c that amateur and professional divers alike get their feet wet at this $4.6 million project opened in 2004 in cooperation with the University of Haifa.

The park offers four diving complexes, one of them specifically for snorkelers. Underwater, 25 marked exhibits point out basins, breakwaters, loading piers, storage rooms, a promenade and a lighthouse. Wrecked ships and cargos, ancient anchors and an illegal immigrant ship are among artifacts discovered on the seabed.

A lot of the discoveries in Caesarea’s waters in recent years have been made by an American immigrant, University of Haifa geo-archeologist Dr. Beverly Goodman. By studying ancient undersea fragments collected on her dives, Goodman found evidence of an ancient tsunami that destroyed Herod the Great’s first-century harbor. She’s using the data to help predict future environmental events and to make recommendations for preserving the fragile coastline as sea levels rise.

Prefer to stay on the surface? Caesarea is home to Freegull Sea Sports surfing school. This is where Gal Fridman, Israel’s Olympic gold medalist in wind surfing, once took courses. At Beit Yannai Beach on the road toward Netanya, is the surfing school Kite Away.

Every Friday toward sundown during the summer months, the sky over Caesarea’s beach is brightened with colorful kites in an unusual modern Israeli ritual to welcome the Sabbath. Photo by Nimros Glickman
Kites take to the air over Caesarea on summer Fridays.

Founded as a Phoenician port called Stratons Towers, in 90 BCE the town was conquered by Alexander Jannaeus and annexed into the Hasmonean kingdom of the Greek period. Ruins of temples to Greek gods remain as a testament to this era.

Nearly 60 years later, the Roman Emperor Augustus Caesar presented the town as a gift to his puppet king, Herod, who renamed it Caesarea and constructed a harbor, hippodrome (remember the chariot races?), bathhouses, temples and a palace between 22 and 10 BCE. Caesarea became the capital of ancient Palestine, with brisk trade activity at the harbor.

Today the preserved ruins are incorporated into Caesarea National Park for tourists to explore. Among the treasures is a giant obelisk restored in 2001 in a $150,000 privately funded Antiquities Authority project that took nearly two years.

Pontius Pilate governed Caesarea during the time of Jesus, and here the first pagan, Cornelius, converted to Christianity. During the third century, Caesarea evolved a center for Christian scholarship.

Between the 10th and 12th centuries Caesarea was ruled alternately by the Christian Crusaders and the Muslim conqueror Saladin. In the 13th century, the Mamluk sultan of Egypt captured and destroyed Caesarea along with all other coastal cities.

The Old City lay in ruins till the middle of the 19th century, when Bosnian Moslems and then German Templars established a small fishing village near the site of the Crusader castle. Visitors can tour the pier built here in the 1850s, where fishermen still cast their lines when the sea is calm. A paved path leads to the Underwater Archeological Park, beach, eateries and an artist’s complex. Among the galleries is Draydel House, displaying hundreds of Hanukah spinning tops, as well as other Judaica items, handcrafted by ceramicist Eran Grebler. What is believed to be the world’s largest draydel, crafted by Grebler, towers over Caesarea’s train station.

Outside the harbor area is the Ralli Museum of South American Art, which has works by Salvador Dali and a Caesarea history exhibit. Nearby is the recently discovered sixth-century Palace of the Bird Mosaic. The modern town of Caesarea

Modern Caesarea was established on the northern outskirts of the Old City by Edmond Benjamin de Rothschild of France before the establishment of the state of Israel.

About 4,200 mostly affluent people live in Caesarea’s “clusters,” or neighborhoods, including the Golf Cluster at the highest point in Caesarea, bordering on the newly expanded golf course.

The Caesarea Business Park houses approximately 170 companies and is one of the largest and most cutting-edge industrial and business zones in Israel.

Because of its nearly year-round pleasant weather, Caesarea is a natural for outdoor festivals. In addition to the yearly Jazz Festival attracting musicians such as Herbie Hancock and Chick Corea, the town also has sponsored an international Opera Festival and an Autumn Festival featuring performances by street artists, magicians, clowns, musicians, jugglers and acrobats.