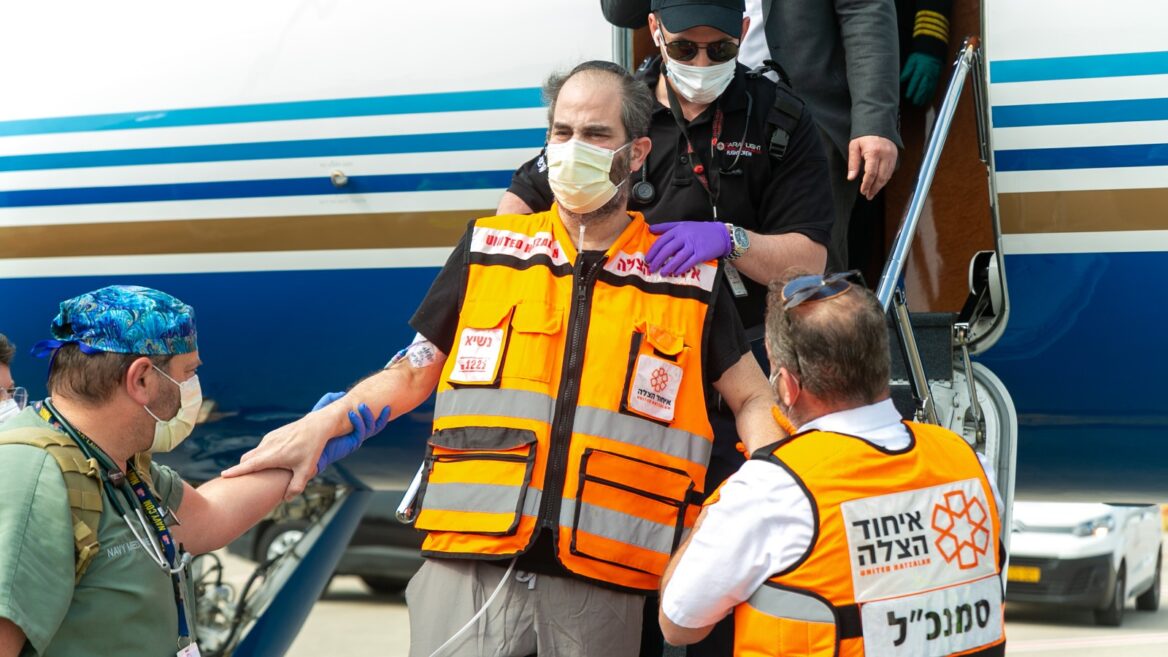 Eli Beer arriving home to Israel on April 21, 2020, after being hospitalized with Covid-19. Photo by Shira Hershkop

Eli Beer didn’t think he would survive his second induced coma and intubation in the University of Miami Hospital’s intensive care unit.

Only 46, Beer was gravely ill with Covid-19. He was thousands of miles from his wife, Gitty, and their five children in Jerusalem.

“I said goodbye to Gitty. I didn’t know if this was the end. I told my children not to worry, that I would come home, but in my heart I knew my chances of making it were very low,” recalls the founder and president of Israel’s United Hatzalah, a unique localized volunteer emergency response network.

But apparently his mission in this life wasn’t over.

After four weeks in the hospital, Beer returned to Israel on April 21 to an emotional welcome from his family and a large contingent of United Hatzalah’s 6,000-plus volunteer medics.

In 1989, the teenaged Beer saw that ambulances often had difficulty reaching emergency scenes in heavy Jerusalem traffic. So he recruited neighborhood-based volunteer medics to respond quickly by foot or cycle, to begin first aid until the ambulance arrives. That became the nucleus for the United Hatzalah nonprofit registered in 2006.

In the past year alone, UH volunteers – including Eli and Gitty Beer and several of their children — responded to more than 650,000 calls across Israel.

An international division sends crews to other countries following mass casualty events. UH chapters have been established Kiev and Uman in Ukraine, Jersey City in the United States, and Panama City. Beer and his staff are helping more than 20 other countries build neighborhood-based emergency response systems. 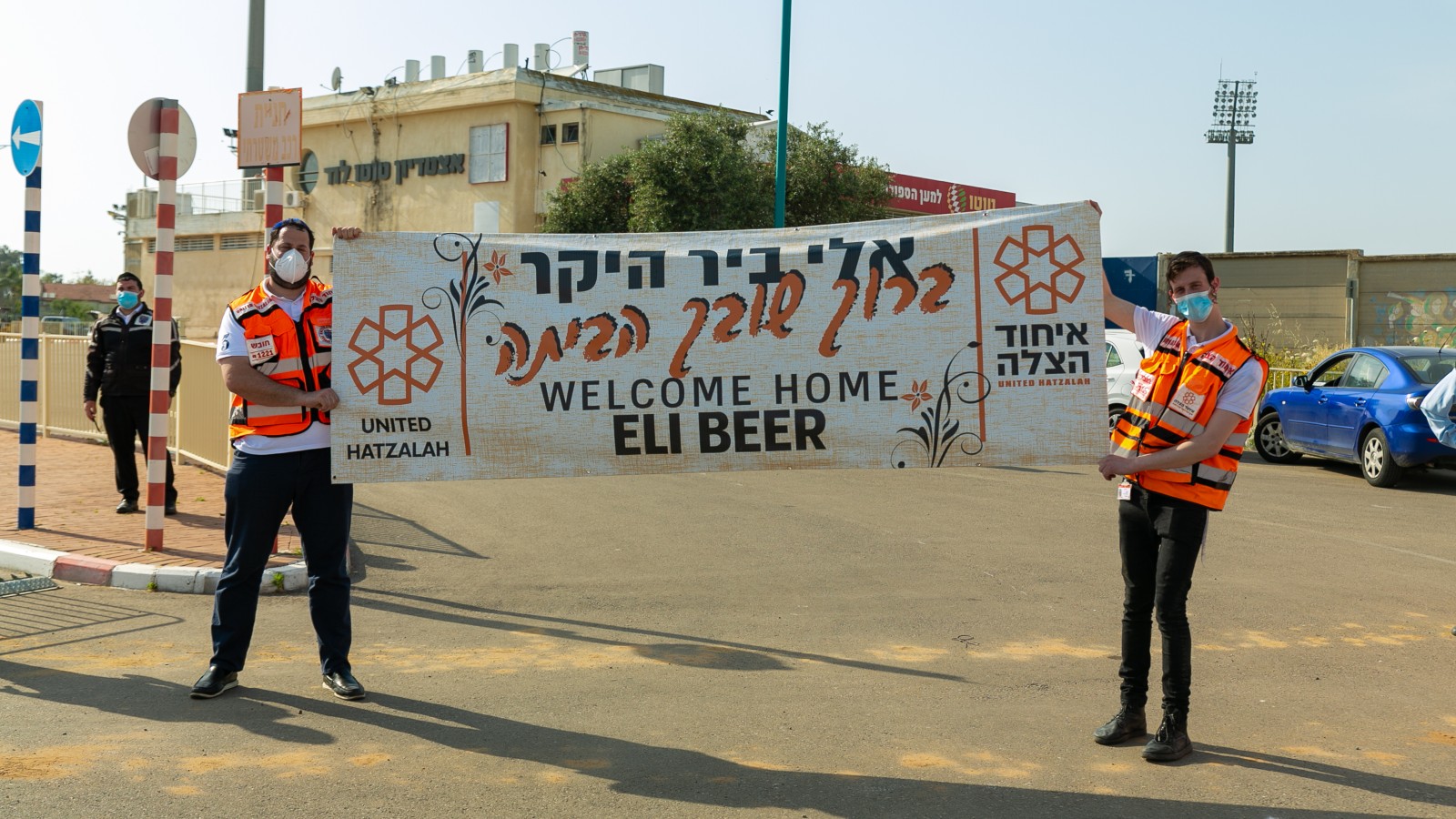 ‘I thought I’d been kidnapped’

In the two weeks before falling ill in Miami during a fundraising trip, Beer had traveled to England, India, Qatar and five US states to advise officials interested in the UH model.

He doesn’t know where he contracted the virus. “God gave it to me,” says this man of faith. “I’m sure the person who gave it to me did not know he had it.”

Beer started feeling ill a few days after the Jewish holiday of Purim, March 10. “I shut myself up in an apartment and took medication for the fever, but nothing helped. Three days later, I felt awful. I couldn’t breathe.”

He went to the hospital at 3:00 in the morning on March 17 and was diagnosed with Covid-19. On March 20, his condition deteriorated. He was put into an induced coma to be intubated. He came out of that, only to worsen again.

Before the second intubation, he says, “I was very afraid that if they put me to sleep I won’t wake up.”

When he did wake up, he was disoriented. “I thought I’d been kidnapped. I didn’t remember that I’d been hospitalized,” Beer says. Nor did he understand that he’d slept through Passover, his favorite holiday.

Talking with ISRAEL21c on June 25, Beer said he is “feeling great; a little tired,” but admitted it’s been a hard recovery.

“Covid-19 is so different from other diseases. Once you get over the flu, you’re done. But this goes on and on. One day I want to wake up not thinking I was ever sick.”

Nevertheless, he said, “I work all day because I don’t want to feel sorry for myself. I have a big responsibility to raise more funds to grow the organization. I have no choice. If I relax, people will suffer.”

Give your whole self

ISRAEL21c asked Beer how his experience as a critically ill patient has impacted his vision for UH and for the world.

“I learned a lot from being unconscious and waking up in an unfamiliar place into a situation where I needed help just to go to the bathroom,” Beer says.

“We have always taught our volunteers to give comfort while they are treating patients. Now I learned even more how important it is for the person to feel they are in the right hands. That’s what I felt in Miami.”

He now urges UH volunteers to “give your whole self, like you’re treating your own mother.”

He gives one example of what that entails.

“We train our volunteers that when they treat someone, they should get down to eye level with the patient. After what I went through, now I know you should go down even lower than eye level in order to give that patient a lot of confidence.” Through his work at UH, Beer actively promotes unity and coexistence.

He believes that if countries could overcome animosities and work together, they could find a cure or vaccine for Covid-19 more quickly.

“Here in the Middle East, we live in a jungle of hatred. But we could take the opportunity of this pandemic to reach out. Covid-19 doesn’t see a difference between Jew or non-Jew, Arab or Christian,” he says.

“When I was put to sleep, I wished that when I woke up, people would have overcome this. And yet nothing changed. It makes me sad.”

However, on a personal level he felt that unity and says it helped his recovery.

“What we are doing every day in United Hatzalah is what people should do to fight this pandemic.”

Beer is more determined than ever to bring United Hatzalah to the world. Meanwhile, he offers some practical advice.

“The way to protect yourself is basic: keep your distance from others, wear a mask and clean your hands all the time. That’s it. We don’t have to lock down the entire world.”