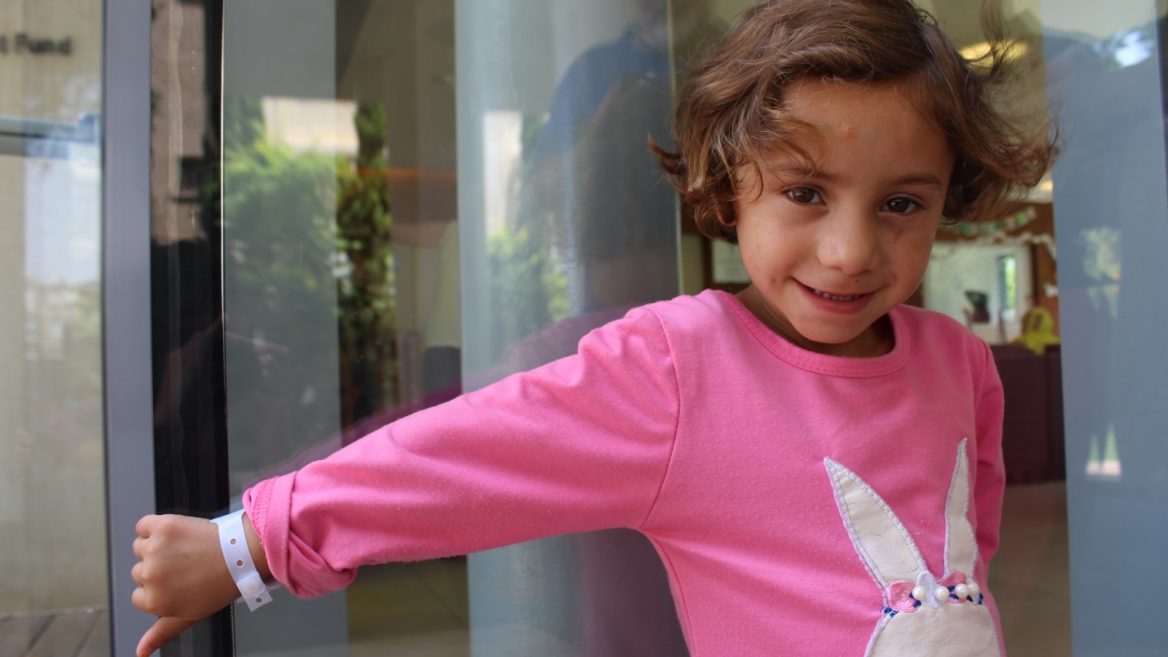 Noorina before her heart surgery at Wolfson Medical Center in Holon. Photo courtesy of Save a Child’s Heart

Noorina is five years old and lives in Afghanistan. In July, her father brought her to Israel for lifesaving heart surgery arranged by Save a Child’s Heart (SACH), an Israeli medical charity based at Wolfson Medical Center in Holon.

When she is older, Noorina may be surprised to learn that an Afghan stranger willingly put himself and his family at risk to give her the gift of health.

Noorina was the fifth child from Afghanistan sent to SACH through the efforts of that same young Muslim father, who asked ISRAEL21c to call him Jangzapali, a pseudonym to hide his true identity. 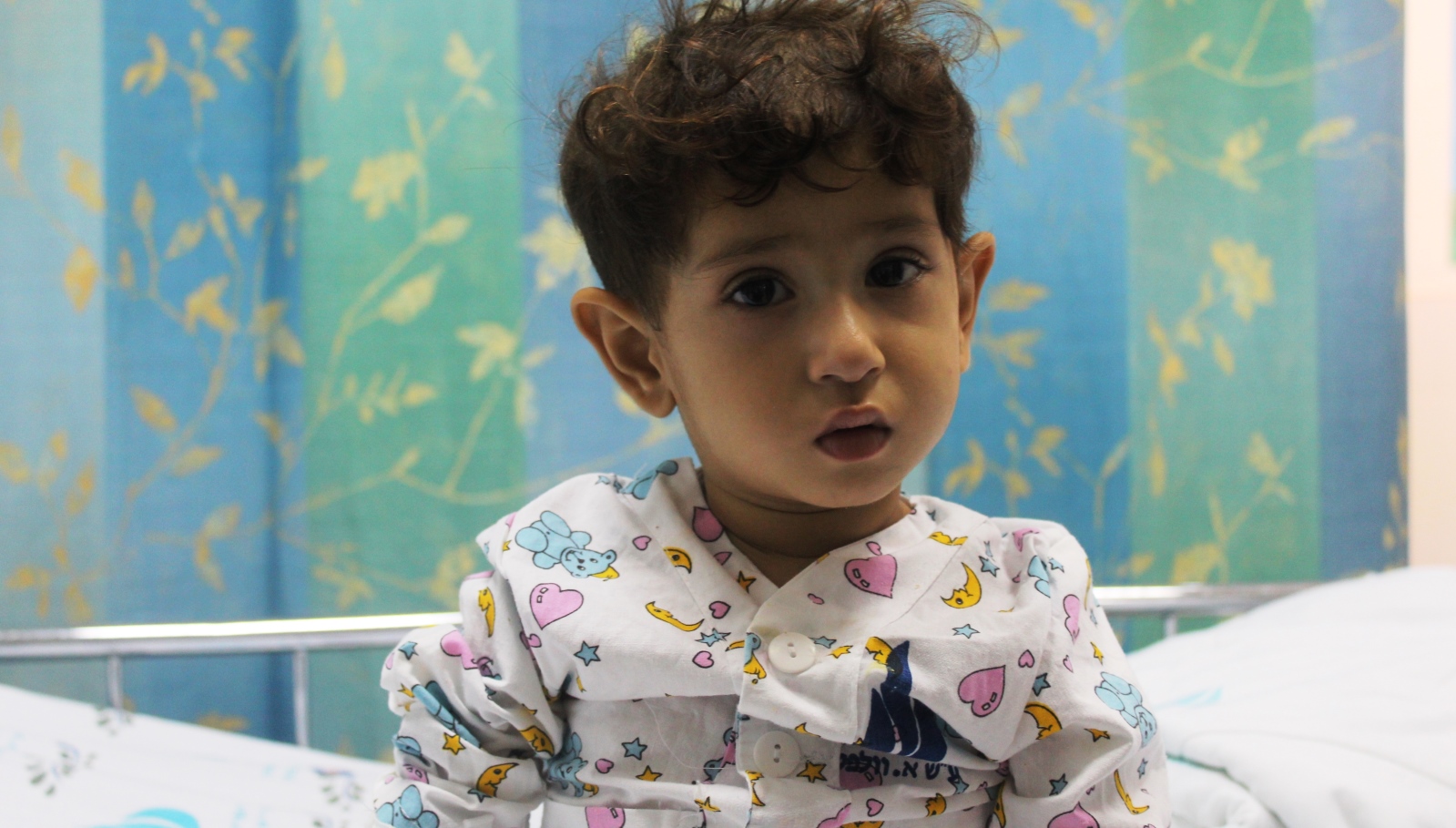 Hina, one of the Afghani children treated in Israel for a heart defect. Photo courtesy of Save a Child’s Heart

Jangzapali is involved in all types of charity work and has built up an international social-media network over the past few years. Children needing urgent medical care are his top priority.

“Almost 10,000 [medical need] cases are registered with the Afghan Red Crescent. They are unable to do all cases, so through our broad network on social media, we arrange surgery for poor children in Afghanistan or India. For complicated cases they cannot handle, we work with Save a Child’s Heart,” he says.

“SACH’s slogan is that they save children suffering from heart defects regardless of orientation, faith, tribe, nationality, etc. Transport, meals, accommodations, surgery, medicine and insurance are all provided free of cost.”

The actual cost of each child’s care is $15,000, covered entirely by donations.

The first Israeli NGO ever to win a UN Population Award, SACH was founded in 1995 and has treated more than 4,800 children from 57 countries, Gaza and the Palestinian Authority territories, and trains cardiology teams from those countries.

Jangzapali first heard about SACH from his Facebook friend Anna Mussman, a retired US State Department employee who administered educational and cultural programs in Afghanistan. In the 1970s she lived in Haifa, where she returned after her retirement, and taught high school English. One of her students was Simon Fisher, now executive director of SACH.

Two years ago, when Mussman learned that Jangzapali was seeking medical care for his relative, a desperately ill Afghan toddler nicknamed Yaya, she decided to intervene.

“I realize helping a child from a country with which Israel has no diplomatic relations is not easy, but perhaps possible,” she wrote to Fisher. In July 2016, Yaya had his successful surgery and the connection was forged. Though Yaya was the first child from Afghanistan treated at SACH, the organization had already handled cases from Iraq and Syria.

He admits to some hesitation to take in a child from as violent a country as Afghanistan because of possible repercussions for patient and family. Jangzapali was hesitant, too.

“The first time I was going to send a child to Israel I told a Palestinian lady I know that I was afraid,” Jangzapali confides. “She said, ‘We have a problem with Israel about the land but we go to Israel for treatment so why shouldn’t you?’ I was happy to hear that. I feel that Jews are Ahli Ketab (people of the Holy Book) and we are all the same human beings.”

Not everyone feels similarly, of course. “Some people here may think I am pro-Western or a puppet of Israel. We don’t know what the risks are and we can’t tell anyone openly that these children went to Israel for surgery,” Jangzapali admits.

The patients’ parents are at risk too, but their child’s wellbeing is the overriding concern, he says. 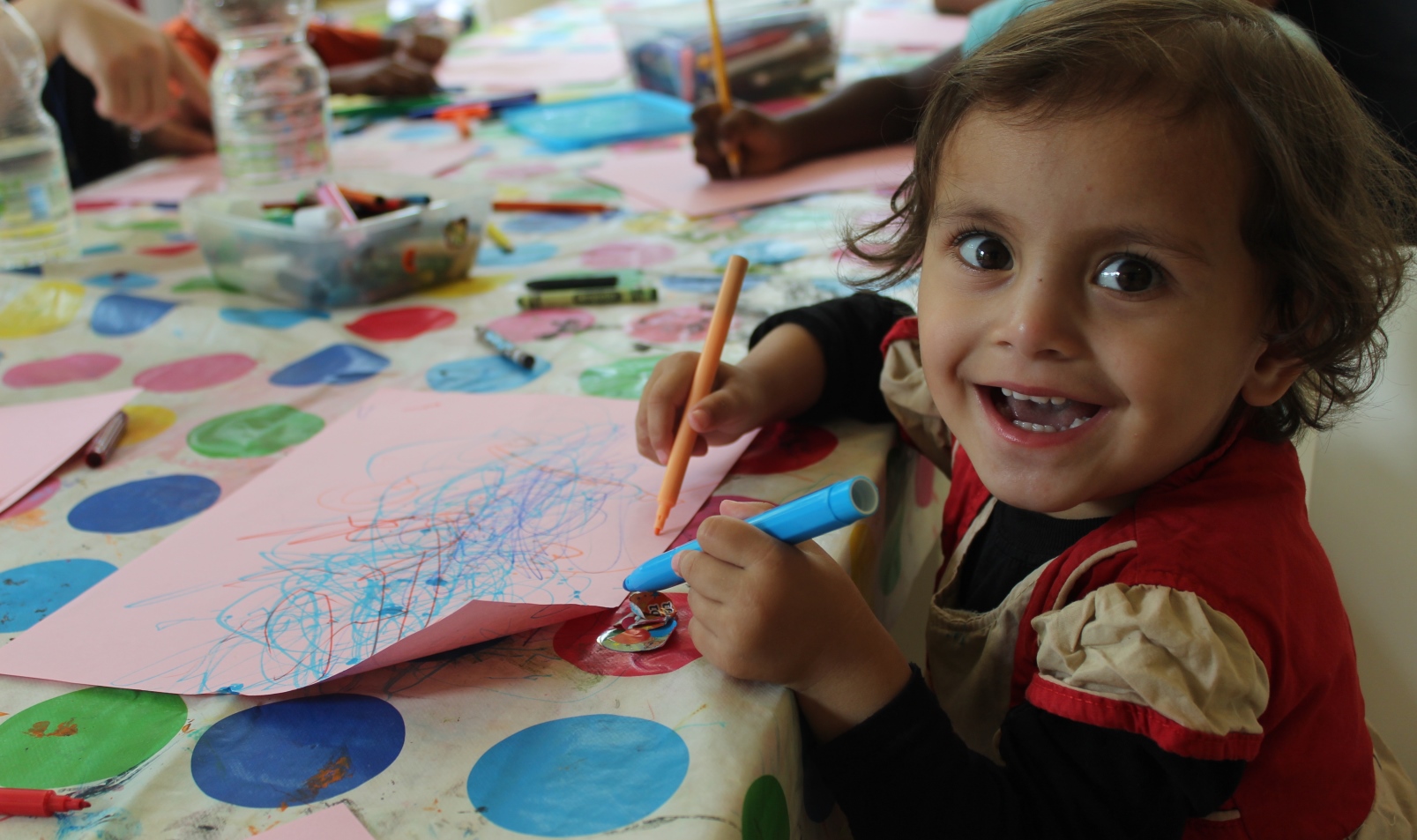 Sama from Afghanistan had successful cardiac surgery in Israel. Photo courtesy of Save a Child’s Heart

After medical records have been received by SACH and the case accepted, Jangzapali and his friends scramble to make travel arrangements.

“He is a great networker, referring patients all over the place,” says Fisher. “A couple of the Afghani kids have arrived here via Delhi. They and their accompanying parent were hosted by Rotary Club members on their way to Israel.”

“We prefer to send kids via Istanbul on a Turkish transit visa because the way is so near and the ticket is cheap,” says Jangzapali.

For Yaya, the Turkish Consulate in Kabul granted a visa within 30 minutes. The next two cases also went smoothly, but the fourth time there was a complication so Jangzapali appealed to the Indian Consulate.

The Indian route also was taken by Noorina and her father. Because the family could not even afford to travel to Kabul to receive the Indian transit visas, Jangzapali contacted his longtime Facebook friend, Kathleen Thorrez of Michigan. She wired over $200 to cover their expenses.

“My dear friend [Jangzapali] has been extremely courageous in his efforts to make a loving difference in so many people’s lives. He has this tender but relentless desire to serve faithfully and respectfully these challenged families who face the worst fear of losing a precious child without this lifesaving surgery,” Thorrez tells ISRAEL21c.

“The story of children coming to Israel from Afghanistan is a classic example of how SACH builds bridges between people and cultures,” Fisher notes, “because it brings together people from different walks of life and different religions, motivated only by the desire to save a child’s life.”

In addition to Jangzapali in Afghanistan, Mussman in Haifa and Thorrez in Michigan, Afghan-American Jew Jack Abraham and his children have sponsored the treatment of three Afghani children including Noorina. Iranian-born Rotarian and cardiac nurse Fary Moini of California, who is not Jewish, helped secure the Turkish visa for Yaya and came to Holon to help care for him. 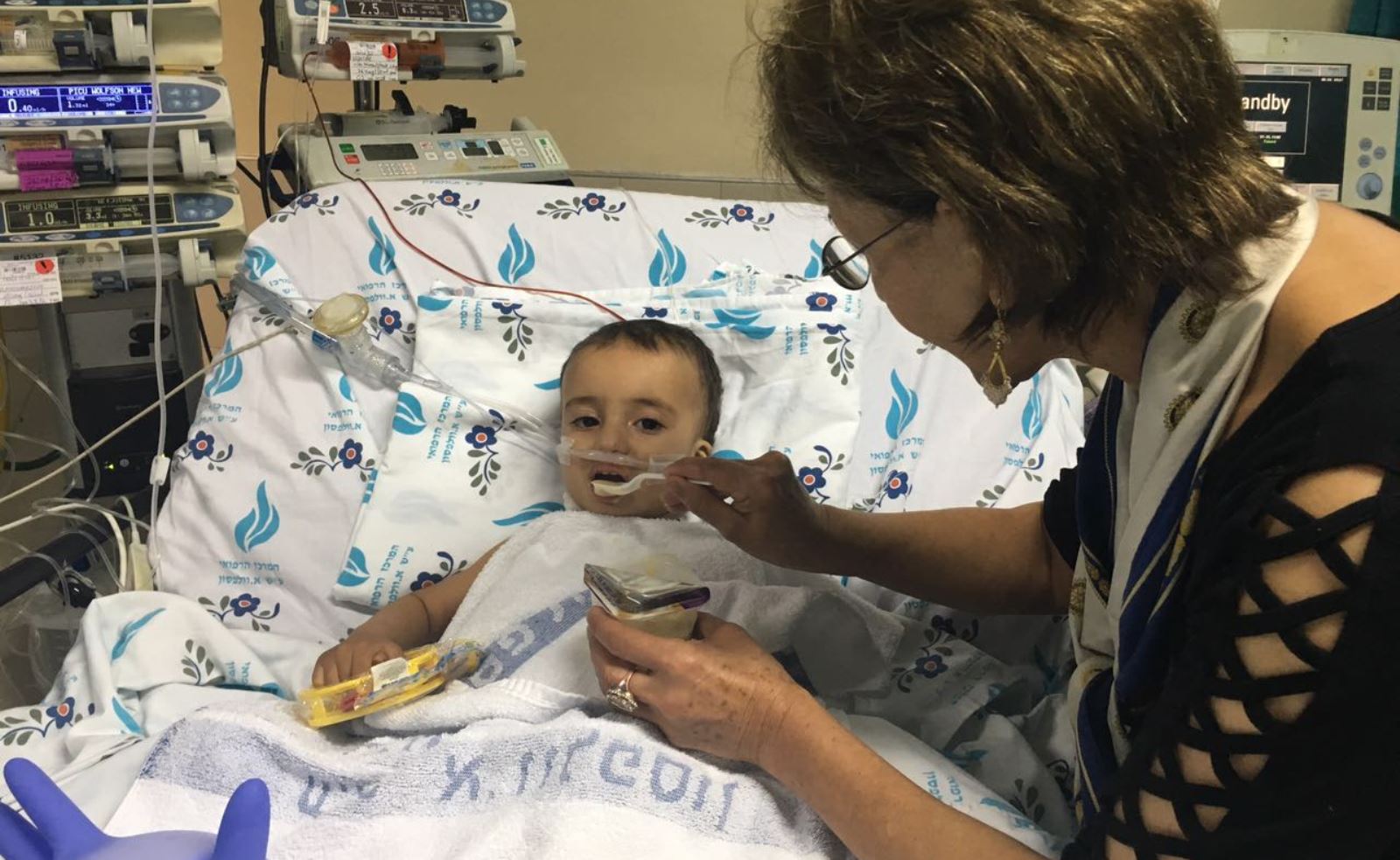 Yaakov Gol, an Israeli Jew born in Afghanistan, volunteers to translate for the Muslim Afghani parents and children at SACH.

“When we started treating children from Afghanistan, we discovered a special Afghan-Jewish community in Israel strongly committed to preserving their traditions and heritage and keeping a dialogue going between people in Israel and Afghanistan,” says Fisher.

Abraham, the donor from New York, contacted Gol and Jangzapali after reading about Yaya’s surgery. Jangzapali tells ISRAEL21c he is deeply grateful for the Abraham family’s generosity. 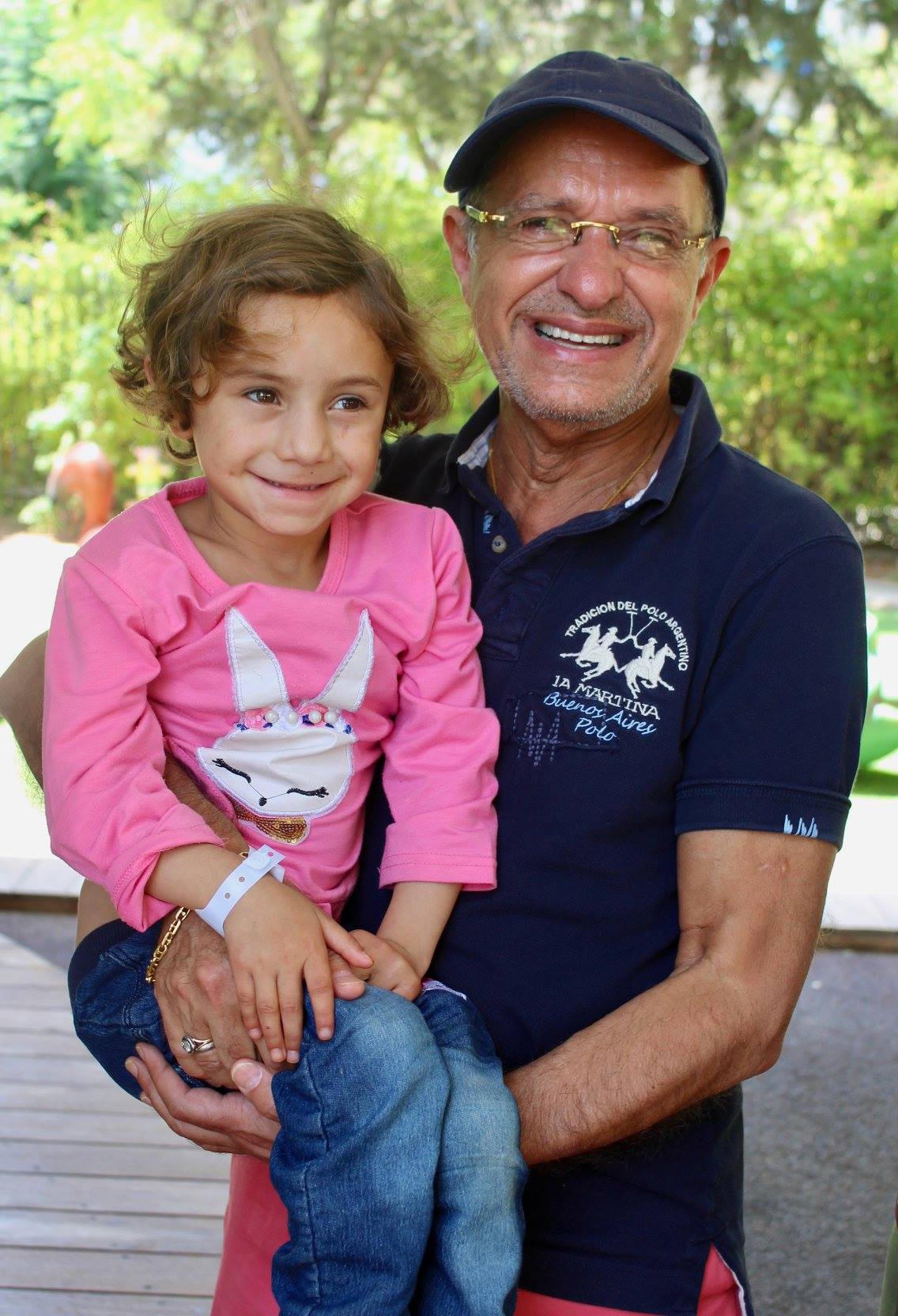 Jack Abraham with Noorina, the Afghani girl whose surgery he sponsored. Photo courtesy of Save a Child’s Heart

“Jews were in Afghanistan for 2,000 years and I wanted to give something back,” Abraham explains. “In this world, there are takers and givers, and those who are givers are the happy ones.”

“This guy is unique. He’s involved in every facet of charity in his country — clothing, food, school supplies. For someone from Afghanistan to arrange for kids to come to Israel… well, it is not next door,” Abraham tells ISRAEL21c.

“The children they send to SACH are the ones that cannot be helped in that ‘neighborhood.’ When I look at Noorina I know that if she hadn’t come here she wouldn’t be alive.”

The fact that five children so far “have come back healthy” motivates Jangzapali to continue this absurdly dangerous work of saving lives. “I do all these things for humanity and for the sake of God,” he says.