Late one afternoon, Nachum Kligman watched his son Moishy returning from his special school in Jerusalem. He was puzzled to see that Moishy, who has cerebral palsy, was wearing a bib though it wasn’t meal or snack time.

“Then it dawned on me that he wears one all day because he drools,” Kligman relates to ISRAEL21c. “A 10-year-old should not have to wear a bib.”

Kligman just completed a successful Kickstarter crowdsourcing campaign to raise money for manufacturing Mianzi shirts, his unique answer to the problem. A total of 509 backers contributed more than $25,000 — $6,000 more than the stated goal.

The shirts are to be made in China from 70 percent bamboo rayon and 30% organic cotton. Mianzi means “bamboo” in Swahili and “a face of dignity and prestige” in Chinese.

“For people with a drooling problem, we add in an extra layer of material in the inside of the shirts across the chest area,” explains the entrepreneur and father of six. “This works to keep our most important customers both dry and comfortable. In addition, we have snaps placed on the shoulder to make these shirts easier to put on and take off.”

Kligman, who emigrated in 2002 from Passaic, New Jersey, to Beit Shemesh, Israel, explains that his original idea was to create a shirt his son could wear with comfort and dignity.

“But the shirts are so beautiful and comfortable, I decided to make a product to sell in regular stores, each packaged with a note that it’s available with the inner lining for people with special needs as well.”

The lined and snapped versions are to be sold through retailers that specialize in products for the special-needs population. Both versions, in styles for men and women, will be available internationally via the Mianzi website, which for now handles only wholesale orders. 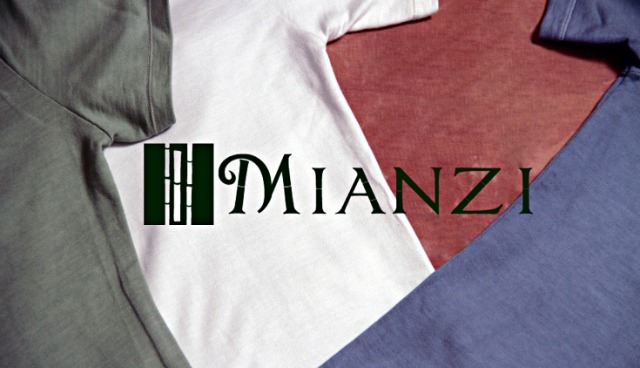 Mianzi shirts are for everyone, but especially for people who drool.

The first manufacturing run will make enough shirts to send Kickstarter donors, some of whom live in Helsinki, South Korea, Australia, Switzerland and France in addition to North America and Israel.

‘Nobody had anything better’

Nachum and Michal Kligman had one child when they flew to Israel on the first charter flight sponsored by the organization Nefesh B’Nefesh. Moishy was the first baby born to immigrants from that planeload, on the auspicious date of September 11, 2002.

“We had moved to Israel because of [the terror attack on] September 11, 2001,” says Kligman, 41, who comes from a background in advertising and marketing.

Moishy was deprived of oxygen at birth, resulting in cerebral palsy. In the videos made for Mianzi’s Kickstarter campaign, shot by filmmaker Brian Spector, Moishy appears to be a happy child with a ready smile. He speaks very little but understands well, and the word “Mianzi” makes him giggle.

Moishy probably hasn’t a clue how much hard work went into this labor of love. His dad, who has founded such businesses as Viewbix and SportsFan.me, began by scouring special-needs websites for the type of garment he envisioned. He came up empty.

“Nobody had anything better than a bib or bandanna,” he says. “I thought, what if the bib was on the inside of the shirt to keep him dry with dignity? And what if I found a quick-dry, antibacterial, hypoallergenic, anti-odor soft material to make the perfect shirt for someone in his situation?”

His research led him to bamboo, which has all those characteristics and also is eco-friendly because it is harvested in renewable forests. He added organic cotton to make the shirts more durable. The machine-washable fabric is an absorbent French-terry weave.

Next, Kligman located a fashion designer through the website guru.com. Tanya Blanding lives in Canada and has collaborated with design houses including Ralph Lauren, Ellen Fisher, Calvin Klein, Perry Ellis and Bill Blass.

“I needed someone to turn the vision into something I could hand to a factory and say, ‘Make this.’ It took seven or eight months because it was a long process of choosing materials and colors.”

Kligman says he chose to launch Mianzi through Kickstarter because along with financial support it provides a vehicle for real-time market research.

“Now I see this is a product that is needed and wanted, and I also got pre-production orders,” he says. “So the risk is a lot lower and you get feedback.”

He chose a target of $19,000 to pay for a minimum order for each color and style, with enough left to pay Spector and Blanding. But he’s put significant funds into it himself, and four potential investors have contacted him.

In the coming months, Kligman will meet with a patent attorney; fly to China to oversee production; build an e-tail website; and start designing additional products from the same material — a sweatshirt and hoodie first, then eventually undergarments, bed linens, lounge pants, “and other items that will bring luxury to special-needs people and everyone else,” says Kligman.

For now, orders are to be fulfilled by a New Jersey business, but Kligman hopes Mianzi will grow enough to make it economically feasible for him to ship out of Israel.