Since 1987, Israeli adults with visual disabilities have been enjoying lawn bowls – an outdoor sport played with a one-kilo ball aimed toward a target – as part of the all-volunteer Israel Lawn Bowls Association for the Blind.

“Among sports for the blind, lawn bowls has the largest number of participants in Israel,” says Sarah Shapiro, a retired immunology researcher from Haifa who has managed the Israel Lawn Bowls Association national team since 2003 and just completed a six-year term as president of the Israel Association for the Blind.

Paired with sighted coaches, about 50 players meet on Sundays at lawn bowls clubs in Haifa, Ra’anana, Ramat Gan and Kiryat Ono. Thanks to the league’s affiliation with the International Blind Bowls Association and the International Bowls for the Disabled, serious contenders compete overseas with the support of donors including Toto-The Israel Sports Betting Board and the Ministry of Culture and Sports.

Despite their relatively small contingent, the Israelis always do well in competition. Most recently, Israeli blind lawn bowlers earned five medals at the 2015 International Bowls for the Disabled’s international competition in New Zealand. 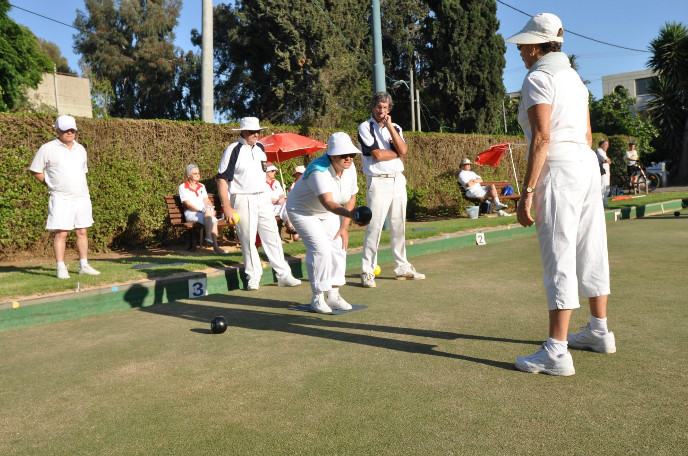 Sharon Ashtar from Hadera won a gold medal in women’s singles. The 40-year-old mother of two, coached by Lola Skikne, lost her eyesight gradually due to a genetic condition and is now completely blind.

Another women’s singles gold, in a different category according to visual ability, was captured by Jaklin Shukrun, 57, a partially sighted Netanya resident coached by Bernard Cuikermann. The Israeli delegation to the 2015 International Blind Bowls Association championship in New Zealand. The sign is held by an umpire.

“The Australian and English teams have more than 200 bowlers, and the fact that we consistently win medals is to the credit of our bowlers and volunteers,” says Shapiro, who is seeking additional coaches for players on a waiting list.

Baranes, a Herzliya resident and current league chairman, has been participating since 1989 and was one of the first Israelis to win a medal in international competition.

That happened in Victoria, Canada, at the 1993 World Championships for the Blind. He and Tami Carmeli picked up a silver medal there in paired competition (coached respectively by Alex Goldsmith and Ivan Israel) and then won individual bronze medals at the 1996 Paralympic Games in Atlanta, Georgia.

It was also in 1996 that the league started an annual competition where blind and sighted bowlers play side by side, and every June it still attracts up to 150 participants. The event is known as Essie Day in memory of Essie Narunsky, one of Israel’s first coaches for blind bowls.

Baranes tells ISRAEL21c it was Narunsky who first got him involved in 1989. “Before that I played goal ball, a special three-on-three game for blind people, and I also did sighted-and-blind tandem bicycling. Essie took me to Ramat Gan and we started there with [coach and organizer] Juliette Birnhack. After the first time, she told me I have a lot of potential.” Itzik Baranes being coached by Miri Goldfarb at the Ramat Gan Bowling Club during a 2010 international championship in which England, South Africa, Scotland, Canada and Israel participated.

Birnhack tells ISRAEL21c that the sighted coaches provide essential orientation and feedback, given the inconsistent topography of the greens. Clock terminology is used to describe where the ball landed in relation to the target, called a kitty or a jack.

“We position the player on a mat and stand in front of them at a five-meter distance,” she says. “We give them [verbal] direction, and for those who are totally blind we talk all the time about where to aim. Then we tell them the results, and they learn to adjust the strength of their delivery of the ball according to distance.”

Shapiro, vice president of the International Blind Bowls Association, says the game imparts self-confidence and another way to interact with sighted and visually impaired individuals. “Some of the players are competitive. For others it’s just a social outing once a week, a different kind of opportunity for belonging to the community.”

Siberian émigré Yulia Vasilieva, a blind lawn bowler mentored by Goldsmith in Ra’anana, told a TV interviewer: “It puts me in a good frame of mind. If something’s bothering me, I know that on Sunday I’m going to play lawn bowls and I will concentrate only on the game and talking with the people around me. I think that all sports give a sense of community and self-confidence.”

Getting young bowlers aboard

Goldsmith, a founding member of Israel Lawn Bowls Association for the Blind, left to form his own nonprofit in 2012 that is focused on spreading the sport among the younger generation.

“This is something I’ve always wanted to do,” says the Ra’anana resident, who was the first Israeli on the World Blind Bowls Executive when he was elected president of the International Blind Bowls Association in 2005. “There is nothing in the world like this for kids.”

“Eventually we plan for this to spread to other cities including Beersheva, where there are many blind Bedouin children,” Goldsmith tells ISRAEL21c. His dream is for blind and sighted Jewish, Muslim, Christian and Druze children to play lawn bowls together.