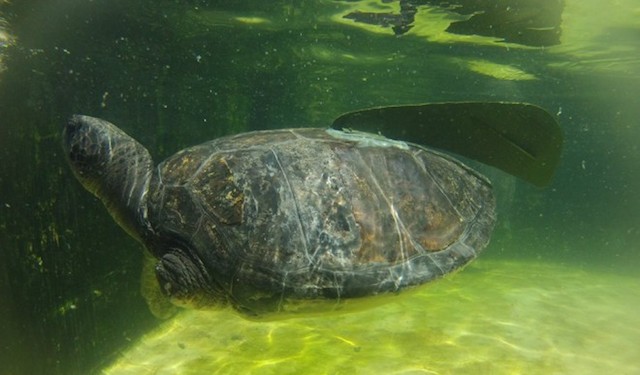 The handicapped turtle could drown without his prosthetic flipper.

The seven-day Jewish holiday of Passover marks the exodus of the Jewish people from slavery in Egypt to freedom in their Promised Land of Israel more than 3,000 years ago.

This year, a 20-year-old handicapped sea turtle called Hofesh — the Hebrew word for freedom — has been given a new lease on life in the same Promised Land.

The rare green turtle, about the size of a laundry basket, washed ashore four years ago along the Israeli Mediterranean seashore. With two severely damaged flippers on his left side, he was taken to the Turtle Rescue and Rehabilitation Center in Michmoret.

Hofesh’s damaged flippers were amputated to save his life, but when he tried to swim he would flail and sink, gasping for breath. He was even resuscitated once.

Caretakers were stymied. Sea turtles can live for up to 80 years. But this one was at risk of drowning at any moment.

“When he gets stressed, panicking for some reason, he gets into a spin as he can only use one side to paddle. His head tilts down to one side and he starts taking in water,” Yaniv Levy, the center’s director, told NBC News in a recent video about the turtle.

And to the delight of caretakers, and the international media, Hofesh is now able to swim. He may be a bit jerky and still flails a little, but as he gets used to the new fin, he starts to lead a more normal turtle life.

However, he will never be able to be released into the wild. The flipper is attached with biological glue that will grow with him, but if it were to fall off, the turtle would certainly drown.

Because his injuries were sustained as a perfectly healthy turtle –– caught up in fishermen’s nets –– he will be used as part of the turtle conservation program and will be bred with a blind young female turtle named Sarit, who lost her eyesight in an accident.

Let’s give a big high five — with hands, flippers, fins, paws or whatever you’ve got — for this novel Israeli approach to save the life of a turtle.

For more on this topic, see ISRAEL21c’s previous story on how an Israeli plastic surgery invention is saving turtles with cracked shells or visit https://www.facebook.com/IsraelSeaTurtleRescueCenter.