Ask Hagit Gal why 2011 was the year historic Timna Park got earmarked for a multimillion-dollar facelift, and she chuckles. “It’s about time!” the park manager tells ISRAEL21c.

The park’s story began 6,000 years ago, when the world’s first copper mines were dug here. In the early 1980s, the Jewish National Fund (KKL-JNF), the Eilot Regional Council and the Ministry of Tourism established a tourist park at this unique UNESCO World Heritage Site, which is rich in both history and natural beauty.

It’s become modestly successful, attracting some 150,000 visitors per year — 20,000 of them Israeli schoolchildren – but clearly it is not nearly as well known as its closest neighbor to the south, the Red Sea resort city of Eilat. Hoping to give this unique site its due, in June the KKL-JNF unveiled major improvements financed by donors in the United States and Germany.

“We have learned what Timna needs, like a teenager that now has to know what to do when it grows up,” says Gal. “We put a lot of money in upgrading the electricity and water systems and bike paths. We changed all the signage.”

Hundreds of shade trees and pergolas are going up to shield tourists from the hot desert sun.

There is talk of a new hotel and a new international airport, which would be situated near Timna and also serve the large tourist trade to Eilat, 16 miles south. 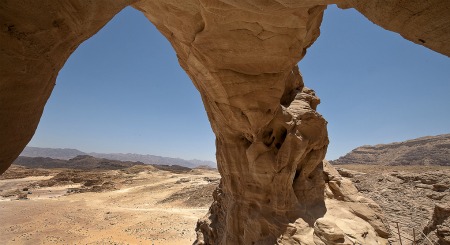 A new visitors center is under construction, and Gal would like to commission an updated version of “The Mines of Time,” a 360-degree 3D show (available in six languages) giving visitors a glimpse into the prehistoric periods leading up to the times of the Egyptian New Kingdoms in 12-14 BCE, when copper mining began.

“There is nothing like Timna in the world,” says Gal. “The copper mines that the [ancient] Egyptians dug here is the story of Timna.”

Archeologists first began investigating the horseshoe-shaped Timna Valley in 1845, discovering evidence of copper refining operations that had come and gone over thousands of years. At first it was believed that most of the mining and smelting was done in the 10th century BCE during the reign of the Israelite King Solomon.

Although the copper used in the Temple built by Solomon in Jerusalem probably did not come from this area, and later research showed that the initial estimation was off a bit, the site became known as King Solomon’s Mines, and the natural red rock columns along the walls of the cliffs are still known as Solomon’s Pillars.

These pillars are actually the oldest sedimentary rocks found in Timna, deposited as long as 530 million years ago. If you look closely, you can see the individual grains of sand that make up the texture of the rock. In the cracks, you can see different sizes and colors of sand in the various layers of sandstone.

The valley is bordered by dramatic purple and pink cliffs, punctuated by Mount Timna rising up at its center and colorful mushroom-shaped sandstone formations all around.

Along with the pillars and mushrooms, Timna has about 10,000 “saucers” — unused mine shafts that had filled up with sand and rocks over many years. 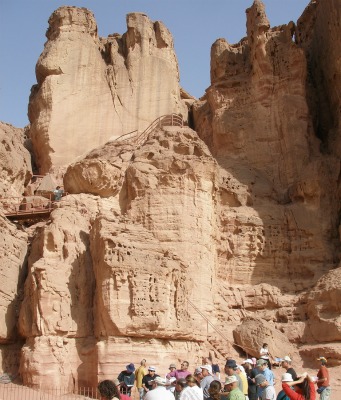 The ancient Miners’ Temple at Timna.

Tourists can explore the “Open Mine,” a shaft that goes down as deep as a 12-story building. You can still see the niches carved into the sides of the shaft for climbing, along with diagonal chisel marks made by the dull stone tools of miners long ago.

The Miners’ Temple, originally a sanctuary to Hathor, the Egyptian goddess of mining, is another popular stop along the visitors trail. Ancient Midianites later transformed the space into their own sanctuary. The two peoples left behind clay vessels, votive offerings made of stone and alabaster, faience beads, seals and scarabs bearing the names of the pharaohs who sent delegations to Timna, as well as tablets and figurines of Hathor, copper animal figurines, jewelry and shells from the Red Sea.

The manmade Timna Oasis Lake, the recreation area of Timna Valley, draws from the groundwater found in the layers of sandstone below. You can rent a pedal boat and picnic at shaded tables and benches – even stay overnight at a newly renovated camping site.

Timna’s Challenge Site, at the foot of the red sandstone cliffs, offers rappelling, a climbing wall, archery, children’s creative activities and even a “treatment tent” where you can get a massage or do tai chi.

Gal is optimistic that these efforts will increase traffic to Timna Park, as will a new full-size bus line from Eilat that will be a vast improvement over the weekly shuttle bringing tourists to Timna from its better-known neighbor.