The three-legged fox, the chameleon that can’t stick out its tongue, and about 200 other creatures on the modern-day Noah’s ark of psychotherapist Yoni Yehuda are rehabilitating from disability, trauma or injury – as is Yehuda himself.

Puffing on medical cannabis to ease chronic pain resulting from a 1987 army parachuting accident and a 1996 terror attack, Yehuda explains that he and each of the rescued animals at his Havayot Center outside Jerusalem is an equal partner with patients in his unique “Therapeutic Triangles” model of animal-assisted psychotherapy.

“The basis of the work here is saving animals and taking care of them. We are responsible for their welfare as long as they are in cages in our possession, which is not where they are supposed to be.”

As he speaks, he’s hand-feeding a bald baby parakeet while a mare named Venus gives a contented snort in her corral outside. 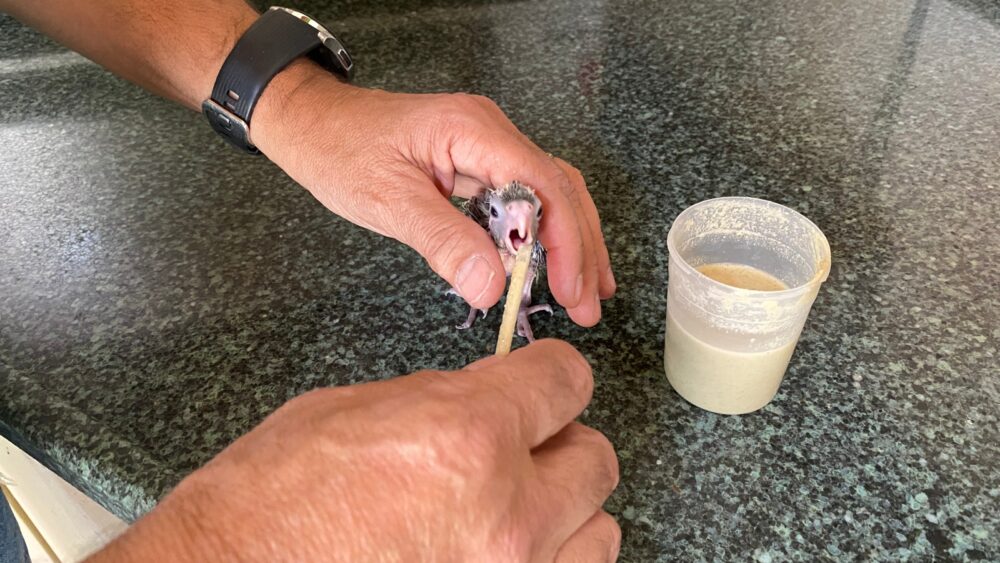 Aside from those born here, all animals at the one-acre Havayot Center arrived after some trauma rendered them unable to survive in the wild, temporarily or forever. Some were former patients of the Israeli Wildlife Hospital; others were saved and brought to Yehuda by individuals or by the National Parks Authority.

However, in typical animal-assisted therapy, usually with dogs or horses, the animals are adjuncts to the therapeutic process. At Havayot, they are fully part of the process as the client and therapist jointly care for the animal’s needs.

“We are together on the same level and there is a triangular connection with the animal and with the therapist,” explains Yehuda. 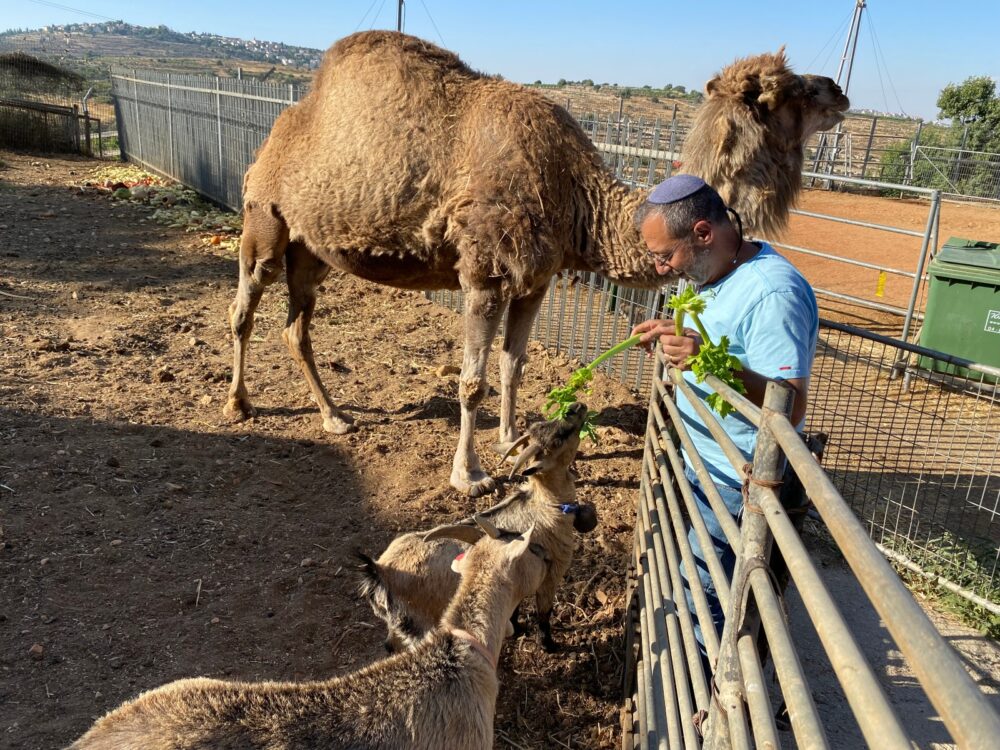 Dr. Yoni Yehuda feeding celery to Becky the camel and Lili and Lila the llamas. Photo by Abigail Leichman

“Everything comes from a lot of respect for the animals and letting them lead the process. As a therapist, I have to put my ego aside and then the client can project things on the animals and start to speak about his own world and reach for solutions.”

The therapist must have the knowledge and observational expertise to decide which animal will have best therapeutic value for each client.

Yehuda chooses from a large variety: insects, fish, reptiles, birds, rodents, an assortment of wild and barnyard animals, dogs and a cat. He gives each one a name and comfortable conditions for its needs. 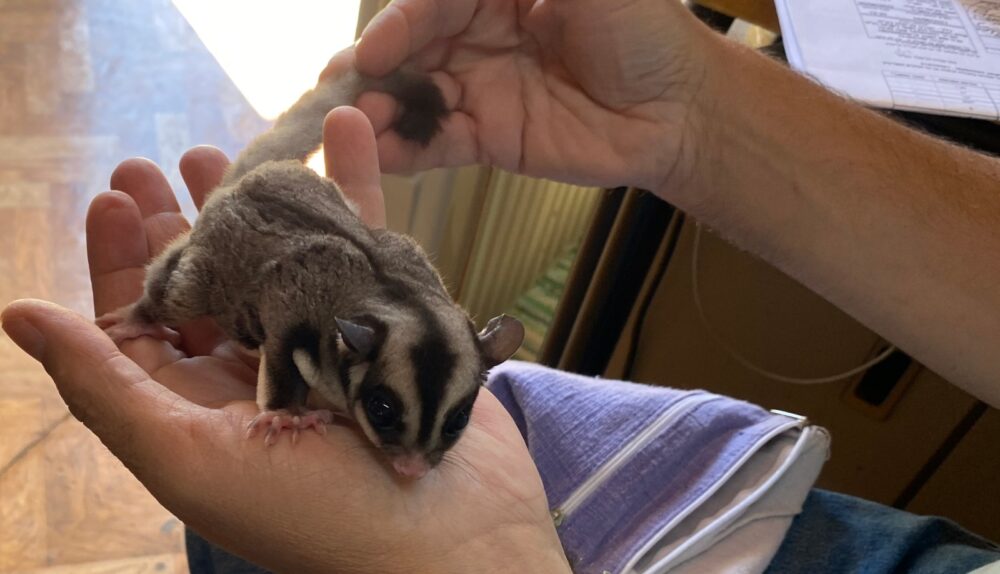 Poni the sugar glider is carried around in a soft pouch. Photo by Abigail Leichman

University of Denver Prof. Philip Tedeschi, an expert in animal-assisted therapy and founder of the Institute for Human-Animal Connection, has visited the Havayot Center several times.

“Philip said this may be the only place in the world with such a large range of animals for therapy. It was certainly the first of its kind,” says Yehuda.

Goldfish are therapists, too

When I ask how fish can be therapeutic partners, Yehuda points to Yossi, a handsome goldfish swimming in an aquarium.

“Put your finger on the glass and tap it. Now move your finger to the other side and tap it. He will come over to you because Yossi loves to be in touch with people,” Yehuda instructs me.

Sure enough, Yossi follows my finger. 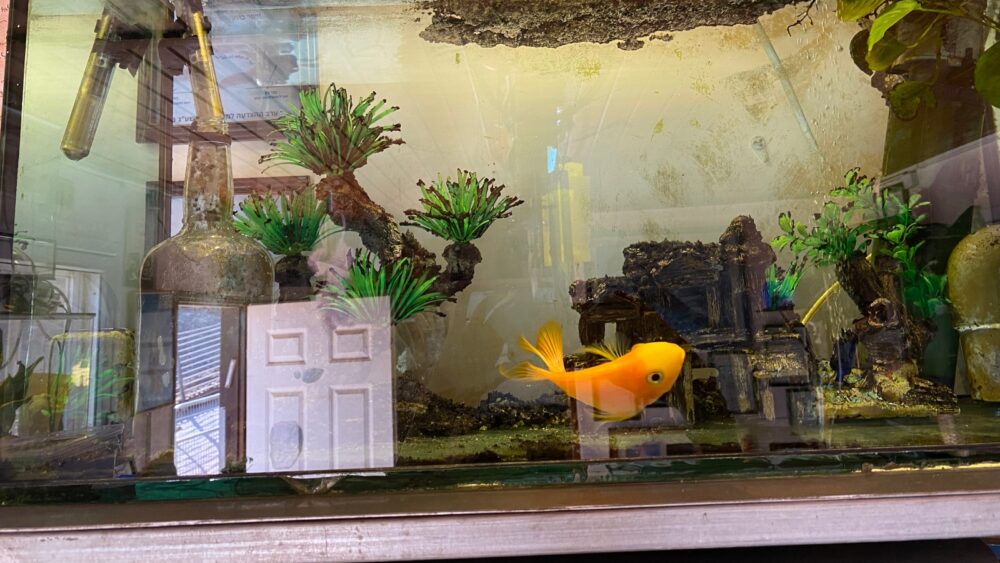 Yossi, a therapeutic goldfish at the Havayot Center. Photo by Abigail Leichman

“Now, think about a very shy child. He may have selective mutism. You want to give him the feeling of connection with an animal, but with Yossi he doesn’t have to be in physical touch with it and he doesn’t have to speak to it,” says Yehuda.

“If he wants to, he can try to read Yossi’s body language and become his spokesman. If a child doesn’t want to speak to me but starts speaking to the animal, then he can speak to me. The animal makes the change.”

An empty Jack Daniels bottle was placed in Yossi’s aquarium by a client struggling with alcoholism ever since his birth to an alcoholic mother.

“The water in the aquarium symbolizes life, the womb. The fish represents our ability to return to the womb and be reborn,” says Yehuda.

“Leaving the bottle in the aquarium allowed this man to start over. He was able to stop drinking. And neither I nor the fish had to say anything.”

Yehuda shows me a maze constructed by a child grappling with his parents’ divorce. The mouse begins from one house and learns to follow a long route leading to two houses — a mother’s house and a father’s house. 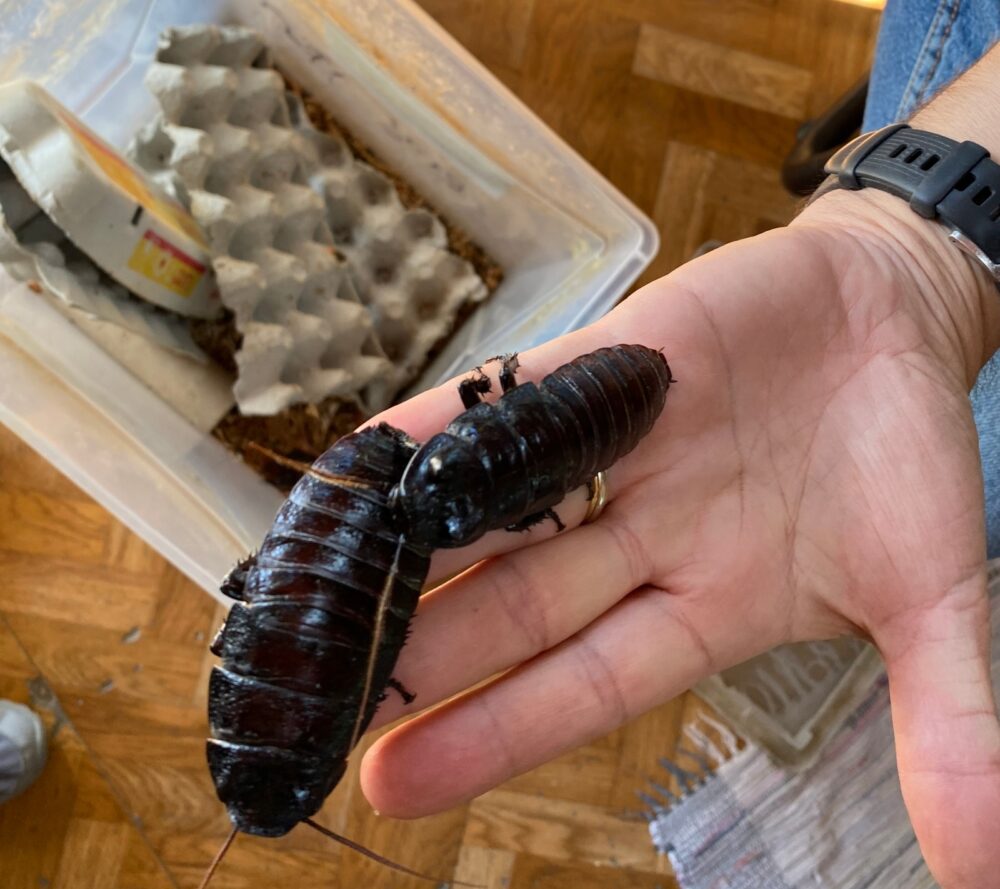 Insects such as butterflies, walking sticks and gigantic Madagascar hissing cockroaches can be effective in treating various phobias and difficulties.

Snakes help clients with sexual identity issues because of the way they shed their skin and develop a new one as they grow throughout their lifetime.

When Yehuda was 13, his beloved cousin Noam was killed in action in Lebanon. The two boys had enjoyed caring for Noam’s pets including a sheep. They used to talk about how animals helped them understand their own feelings.

At the time of this tragedy, the Yehuda family was living in England. Sensitive to their son’s grief and his connection to animals, Yoni’s parents signed him up for a class for gifted children at the London Zoo under Sir David Attenborough. 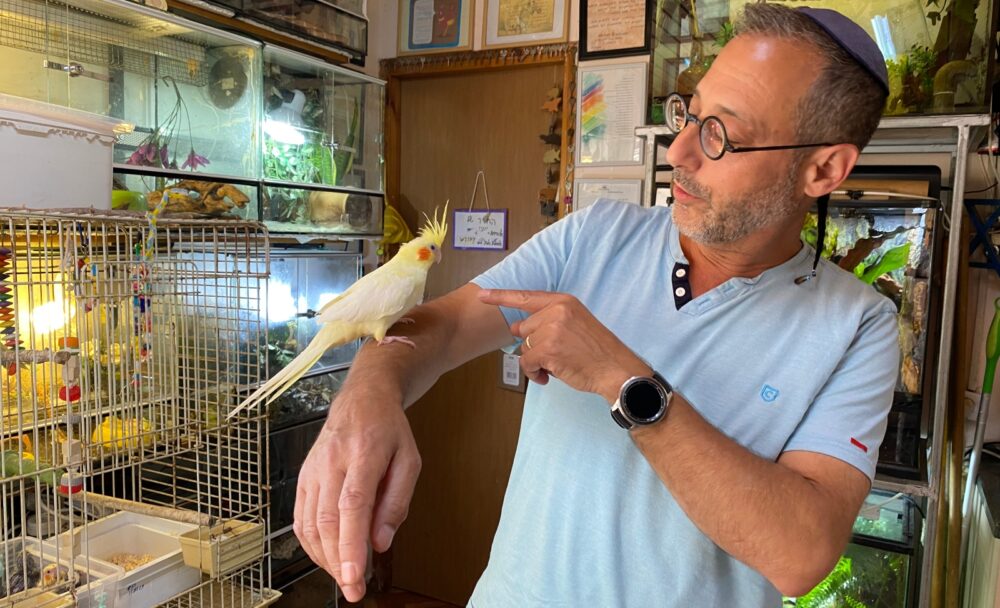 At 19, after a military parachuting accident rendered him unable to walk for some time, Yehuda was one of the first wounded soldiers treated by equine therapy pioneer Anita Shkedi, who later founded the Israel National Therapeutic Riding Association.

Thus, when he was shot in a terror attack nine years later, “I knew that I had to have animals around me because only with animals could I understand what was happening inside me.”

Yehuda, now 54, has a master’s degree in special education and a PhD in psychology. A man of faith, he speculates that God was the first animal-assisted psychotherapist.

“To save humanity, God puts Noah in the ark with all these animals. He could have just put him to sleep and woken him up after the flood. But God put people with animals to save their own souls,” he says.

Clients need not share his religious beliefs to benefit from his therapeutic model, he emphasizes. 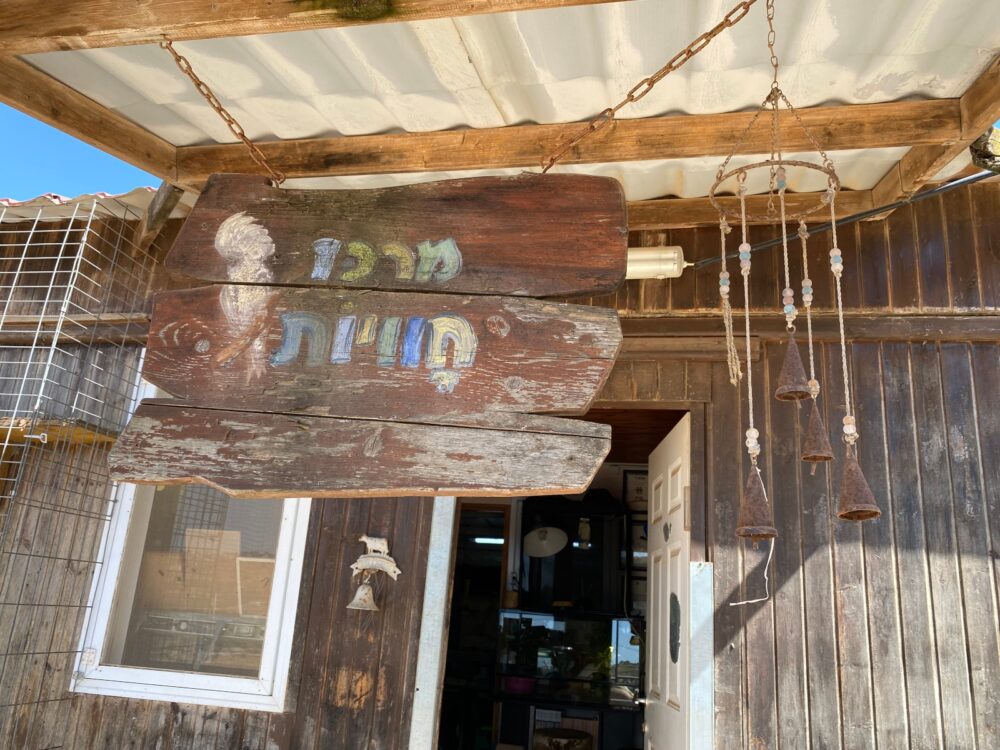 The sign for the Havayot Center in Elazar. Photo by Abigail Leichman

The nonprofit Havayot Center, built with Yehuda’s own hands and funds on the grounds of his home in Elazar in 1998, is supervised by the regional veterinary authorities and other governmental agencies and ministries.

The center accepts private clients and is an authorized provider for victims of terror attacks and war. 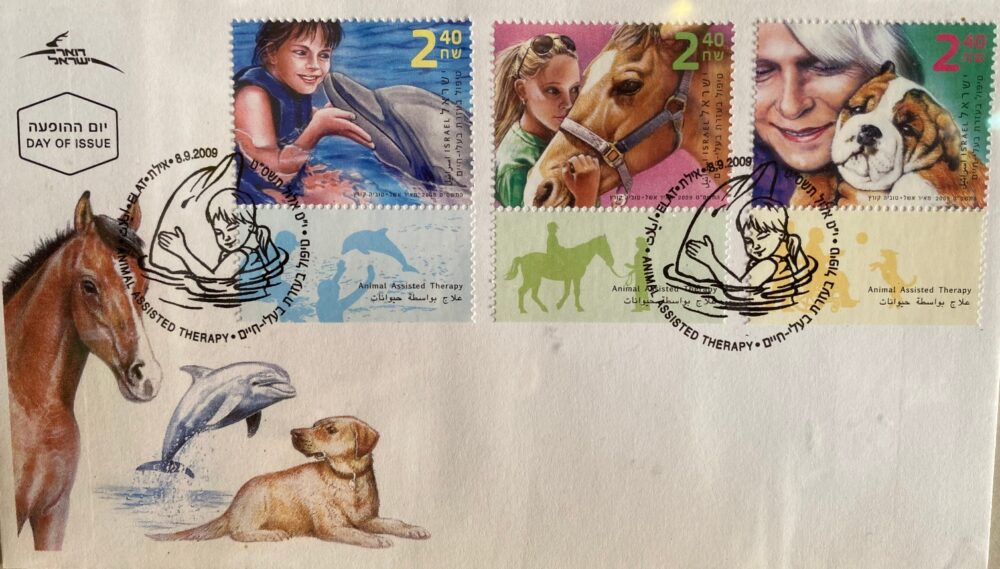 Yehuda opened a School of Animal Interventional Therapy at the Hebrew University of Jerusalem and traveled extensively lecturing about his work and teaching his protocols.

In 2009, the Israel Postal Service issued a series of stamps recognizing the influence of Yehuda’s Therapeutic Triangles model in the field of animal-assisted therapy in Israel and around the world.

Saying hello to each animal

But Yehuda’s ongoing physical and emotional rehab forced him to take a step back.

He grapples daily with PTSD, fibromyalgia, CRPS (complex regional pain syndrome) and other ailments including osteoporosis from intensive steroid therapy.

He has daily physical and hydrotherapy and periodically receives hyperbaric oxygen therapy for PTSD.

Currently, he’s donating his services to members of an Israeli organization that helps people dealing with PTSD; the Jerusalem-area group encompasses more than 70 families.

“My innovation was that I work with the families as well, because they are neglected,” says Yehuda.

“No one ever asked my wife, Liat, if she needed help. When I was in a wheelchair, the need for help was obvious. But when you have PTSD, it’s hard for people to understand the hell that’s happening in your head and how it affects your family.”

The Bernie Madoff financial scam and the Covid epidemic have left the Havayot Center struggling. Yehuda had to let go many staff members and rehome some horses.

But despite his limited energy, time and money, he is carrying on – as much for himself as for his clients.

“I don’t know what I would do if I didn’t have the feeling of responsibility to wake up every morning and spend three hours saying hello to each animal,” he says.