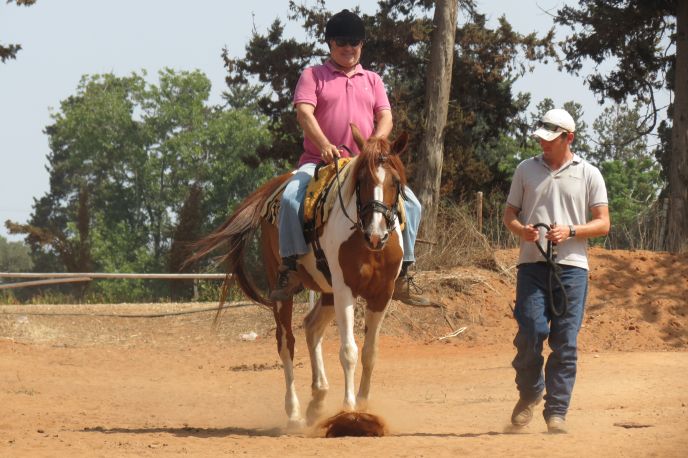 Yossi Shemtov, a former soldier with PTSD, riding at INTRA.

When combat veterans or terror victims with post-traumatic stress disorder arrive at the Israel National Therapeutic Riding Association (INTRA) in Bnei Zion near Ra’anana, they’re seldom ready to touch a horse, let alone ride it. Some are so debilitated they can barely get out of bed.

Under the guidance of a staff of six trained by Anita Shkedi – considered “the grandmother of equine therapy” internationally — in 10 weeks’ time PTSD patients are in the saddle, opening up emotionally and letting go of their fears. Within a year, most are ready to restart the business of living.

“They come to us in a very distressed state,” Shkedi tells ISRAEL21c. “They’re hyper-alert and constantly worried that they’re under attack. It’s hard for them to leave the house. They are unmotivated, emotionally numb and uncommunicative. They’re taking perhaps 17 pills a day.

“Over the years, PTSD only gets worse and prevents them from working, learning, loving their wife and playing with their kids.”

Little by little, they discover that the horse provides unconditional love and affection. “They begin communicating with the horse and you see the tension being released and the depression lifting. Huge changes take place as they experience the positive movement of their bodies on the horse,” Shkedi explains.

“Their emotional numbness goes away and they say they’re starting to feel alive again. Horse therapy is incredibly empowering.”

Shkedi and her husband, Giora, introduced therapeutic riding to Israel in 1985 and founded INTRA in 2000. They are globally recognized pioneers in using equine therapy to enhance self-confidence, behavior and communication in children and adults suffering from physical, neurological and emotional difficulties.

Thanks in part to the Shkedis, Israel is the only country where equine therapy for children is covered by national health insurance. Now the couple is making notable strides in the area of PTSD treatment.

A native of England with degrees in education, preventive medicine, nursing and therapeutic horseback riding, Shkedi literally wrote the book on equine therapy for traumatic brain injury and PTSD patients based on 30 years of experience in Israel and in the United States. This has become her life’s work.

“More combat veterans have PTSD than any other condition, and that means the numbers are monstrous, especially in the USA,” she says. “In Israel we have a huge number of older guys from the [1973] Yom Kippur War and I’m sure in a few months we’ll start seeing veterans from the Gaza war.”

In 2011, INTRA used donations – mostly from longtime supporter The Good People Fund — to do a year-long pilot study with 25 army veterans suffering from PTSD. Four are back at work, one got married and the others report needing fewer meds and sleeping more soundly.

These improvements were measured only through questionnaires, so now Shkedi is raising half a million dollars to begin a groundbreaking scientific study aimed at quantifying results. 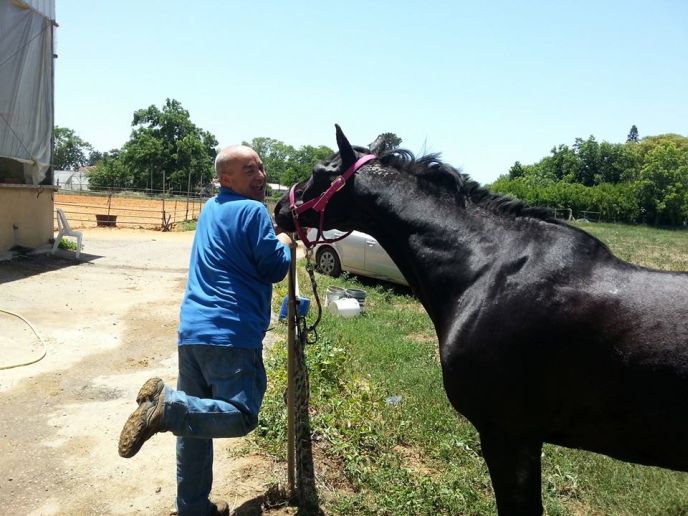 Shemtov came back after his course of treatment to visit his horse.

Itamar Medical of Caesarea will provide its WatchPAT and EndoPAT wearable devices to record participants’ vital signs at the beginning, midpoint and end of the 30-week study.

The data stored on memory chips in the devices will be evaluated by Technion-Israel Institute of Technology Prof. Giora Pillar, a pediatric sleep specialist. Psychiatrist Arieh Shalev, a world-renowned PTSD expert, will also participate.

“This type of study has never been done before with technology,” says Shkedi. “In the field of equine therapy, everyone is waiting for us to get started on this research, as like me, they feel we in Israel have been the pioneers in equine therapy and PTSD.”

A little Garden of Eden

Shkedi is often invited abroad to lecture and to help establish or improve therapeutic riding programs — such as Horses for Heroes in Washington, DC, which treats veterans wounded in Iraq and Afghanistan. In Colorado she helps Vietnam vets as well those from Iraq and Afghanistan, including female victims of sexual assault in the US military.

Wherever she goes, Shkedi emphasizes the importance of providing an environment that feels safe. She teaches time-tested techniques for building rider-instructor and rider-horse trust. 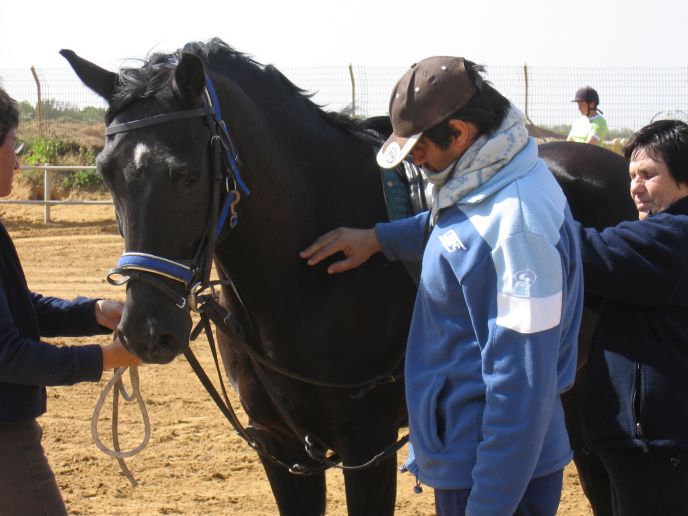 Anita Shkedi, right, with a terror victim who flourished after two years of equine therapy.

“The therapeutic riding center has to have soul. It has to become a little Garden of Eden for the patients,” she says.

One of her most severe cases was a 30-something survivor of a brutal terror attack. “When he came to us he was completely covered in clothing, a scarf and sunglasses. About 30 seconds after he approached the horse, he heard an electric drill, associated that noise with fear, and left. It took us maybe six months till we got him on the horse.”

This was accomplished in a gentle and patient process to dissipate the fear. “Each week we noticed a layer of clothing was coming off and finally we saw his eyes,” Shkedi reports. “His psychologist told us that all he could talk about was riding. After two years he had learned to walk, trot and canter the horse, wearing just a T-shirt and jeans, with a smile on his face.”

Shkedi was recently asked to help establish a program in England, and to write a national curriculum in Israel for equine therapy students. “Therapeutic riding is now part of the Israeli way of life. We started it, and that is a huge honor, but we have to raise the standards of instruction,” she says.