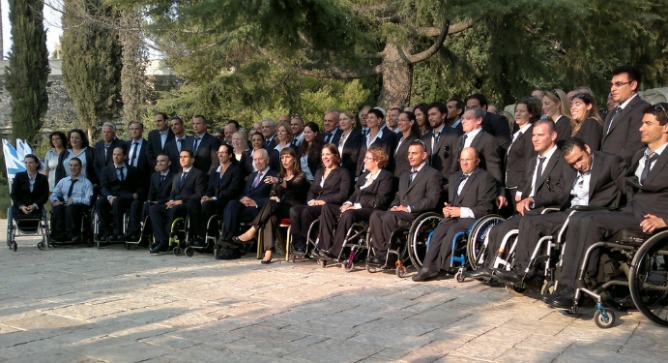 Culminating two days of ceremonies, photo ops and pep talks, Israel’s Olympic and Paralympic teams gathered for one last gala sendoff at the President’s Residence in Jerusalem on July 9.

The athletes wore “dress” uniforms issued days ago: the Olympic delegation in bright blue jackets and white shirts and pants, and the Paralymic team in dark blue slacks and jackets with white-and-blue pinstripe shirts.

Posing for photographers on the veranda with President Shimon Peres and Culture and Sports Minister Limor Livnat, the athletes and their trainers, coaches and companions spontaneously began singing a traditional Hebrew song from the words of Rabbi Nachman of Bratslav, “All the world is a very narrow bridge, and the main thing is not to be afraid.”

These may be world-class athletes whose Saturdays are spent in rigorous physical training rather than in synagogues, but at emotionally laden moments such as these, their pride in representing the Jewish state comes to the fore.

And they certainly are not afraid. The 38 Olympians and 25 Paralympians seemed calm, confident and cheerful as they exited after speeches at the President’s Residence.

“I’ve been ready to go for a week already,” gymnast Felix Aronovich told ISRAEL21c. Aronovich, 24, excels in floor exercise, pommel horse, rings, vault and parallel bars. He doesn’t think it’s realistic to expect a medal – most Israeli hopes are pinned on Alex Shatilov — but the Penn State graduate hopes to outperform his current personal best. “Anything more will be a bonus,” he said with a smile.

Aiming for their personal best

Nimrod Shapira Bar-Or, who will compete in the men’s 100-meter freestyle swimming event, said he’s hoping simply “to go there and represent Israel in the best way and do my best.” That was a common sentiment among the Olympians with whom ISRAEL21c spoke.

“All of us want to win a medal, but not all of us will succeed,” said Judoka Iosef “Soso” Palelashvili, who is among 21 first-timers on the Israel Olympic team. He admitted to being “just a little excited – naturally excited.” When asked his personal goal for the Games, he replied, “My aim is not to give up and to see to it through to the end.” 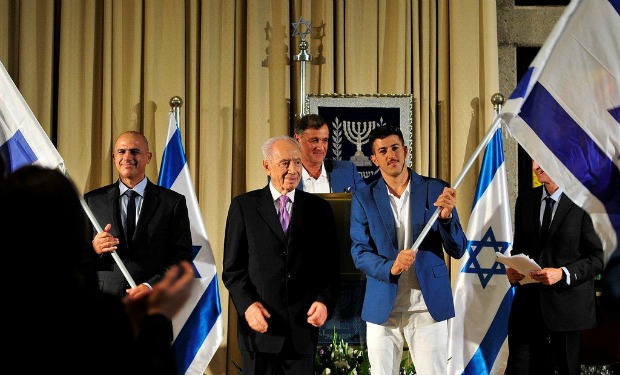 From left, Doron Shaziri, President Shimon Perez and Shahar Zubari at the Olympic and Paralympic sendoff at the President’s Residence, with Israel Olympic Committee secretary-general Efraim Zinger in background. Photo by Razi Livnat

Laser radial sailor Nufar Edelman said that athletes from England, France and Australia dominate in her event. The more likely medalist from the Israeli sailing team is Shahar Zubari, winner of the bronze in RS:X sailing at the 2008 Beijing Games.

“I just want to do my best,” said Edelman. This will be her second Olympics, and she told ISRAEL21c she’s been practicing solo out on the water about six hours a day.

Edelman and synchronized swimmer Anastasia Gloushkov — who competes with Inna Yoffe — were hanging out together as they waited for their team bus outside the President’s Residence. 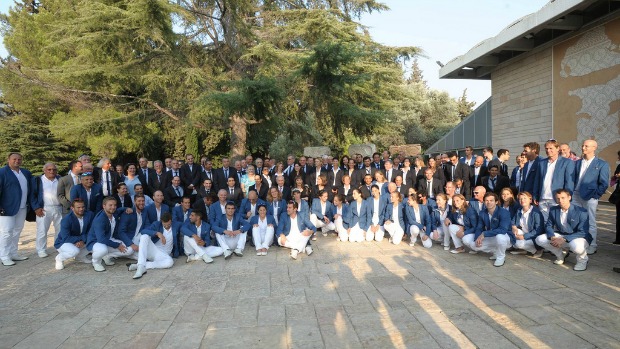 The Olympic and Paralympic teams at the President’s Residence. Photo by Abigail Klein Leichman

“The next thing I’d like to do after synchronized swimming is her sport,” Gloushkov joked, poking a playful finger toward her friend. “It sounds cool to be alone out on the sea.”

Gloushkov admitted that she’s pumped for London and has been practicing “endless” hours a day. “It’s really exciting that this is my third [Olympics],” she said. Though she’d previously told ISRAEL21c this would likely be her last, now she’s reconsidering. “I never say ‘never.’”

The delegates range in age from 18 to mid-40s, a mix of native Israelis and immigrants from a variety of countries. Two of the most recent arrivals are Americans Donald Sanford, a sprinter, and pole-vaulter Jillian Schwartz, who was in the US delegation to Athens in 2004.

The Games don’t begin until July 27 (and the Paralympics on August 29), but a few of the athletes and staffers are leaving shortly, so this was their last time together on Israeli soil until after the summer. On Sunday, they’d received their new playing uniforms and met their assigned roommates for London.

Before traveling to Jerusalem for the presidential sendoff, the athletes participated in a memorial service at the Tel Aviv Olympic headquarters for the 11 Israeli Olympic athletes and coaches murdered 40 years ago at the Munich Games. As of yet, the International Olympic Committee has not acceded to growing international pressure for a minute of silence at London in their memory.

The topic is very much on everyone’s minds, as reflected in Livnat’s speech at the President’s Residence. She declared that if the request is not honored in the end, then every time Israel’s national anthem is played for medalists it will also serve as a symbol of remembrance for the murdered sportsmen.

At another emotional moment during the sendoff, Israel Olympic Committee secretary-general Efraim Zinger handed one Israeli flag to the sailor Zubari and another to Paralympic marksman Doron Shaziri, who won a silver medal in 2008. These men have been chosen for the honor of carrying the flags to lead their delegations into the Olympic stadium.