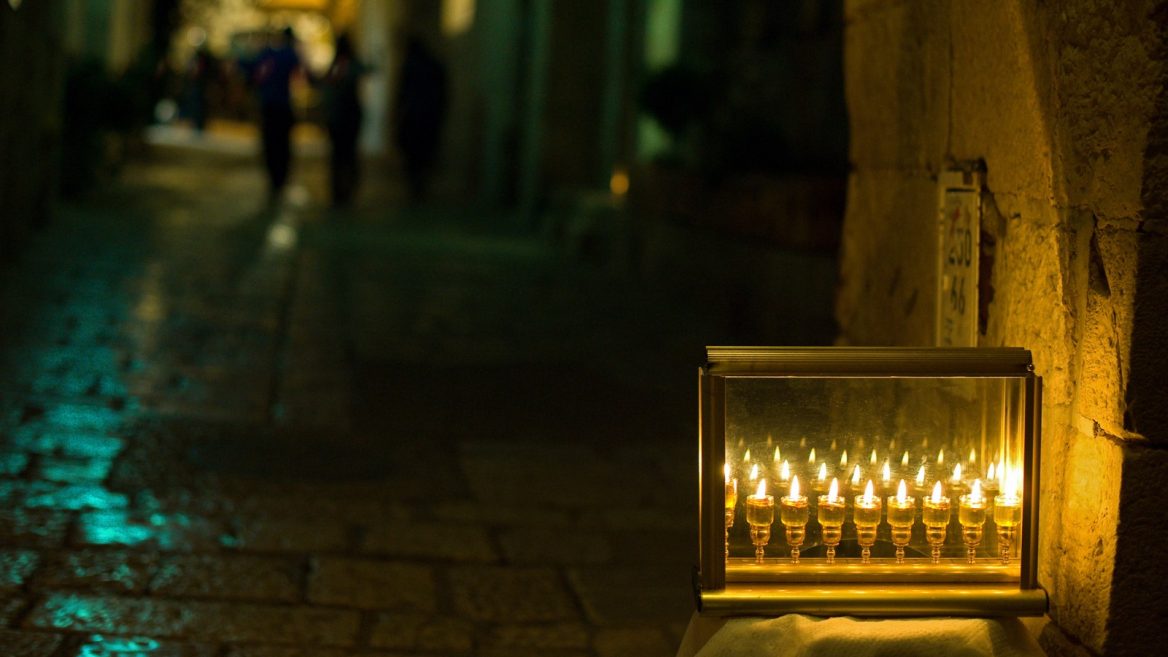 A main street through the Jewish Quarter of Jerusalem’s Old City, where a single menorah burns brightly on the eighth night of Hanukkah. Photo by Yehoshua Halevi

One of the unusual architectural features found in the outside walls of many Israeli homes is a small, glass-covered enclosure prominently located next to the front door.

Designed to shelter the interior from wind and rain, these peculiar stone cubicles lay idle most of the year, springing to life for exactly eight days beginning on the 25th of Kislev on the Jewish calendar, the first night of Hanukkah. 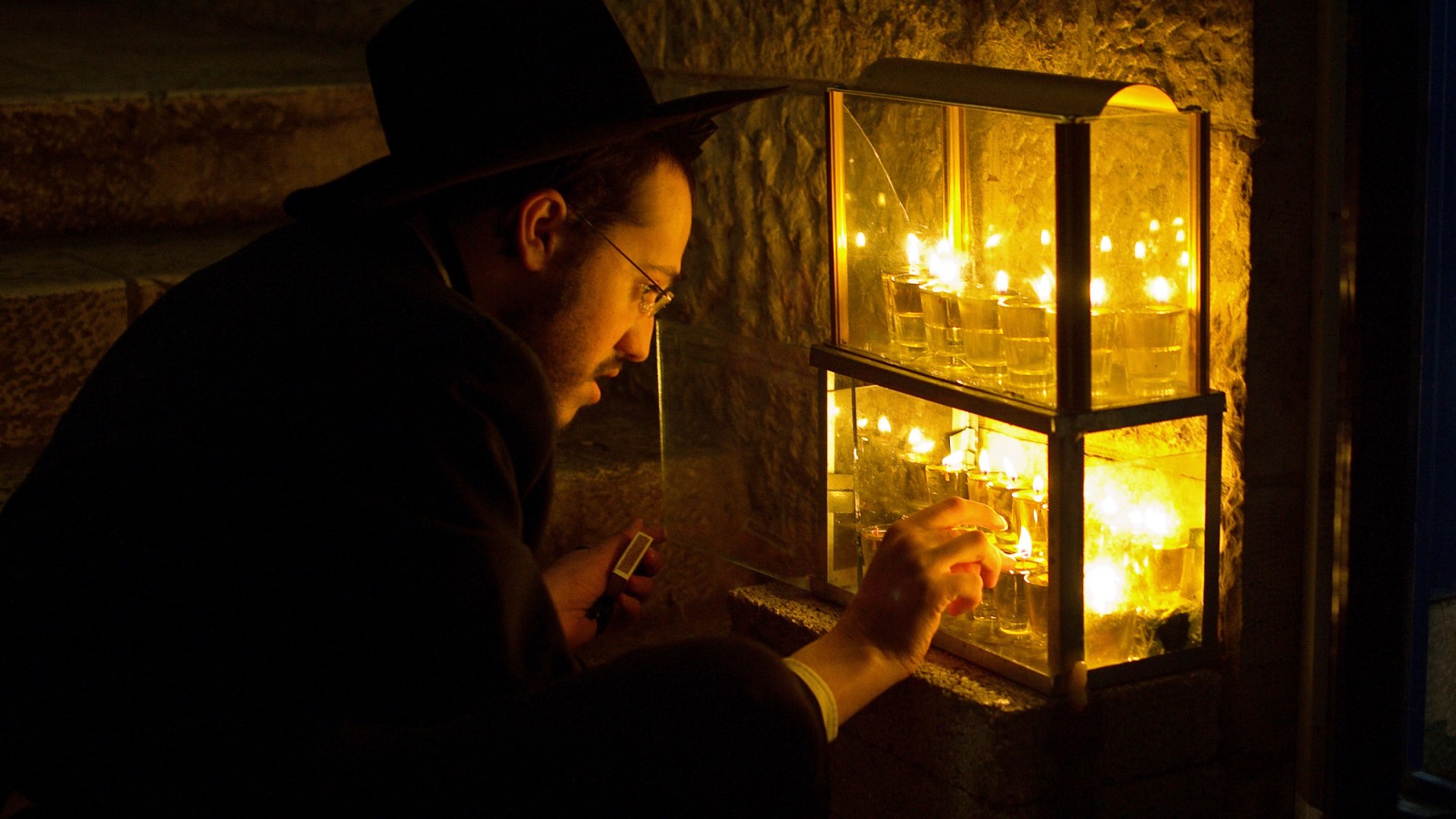 A resident of Jerusalem’s Jewish Quarter lights a menorah on the eighth night of Hanukkah. Photo by Yehoshua Halevi

It’s an ideal location to place the menorah in adherence with the custom of pirsumay nisa, publicizing the Hanukkah miracle, when the oil burned for eight days instead of one during the rededication of the second Jewish temple in 165 BCE. 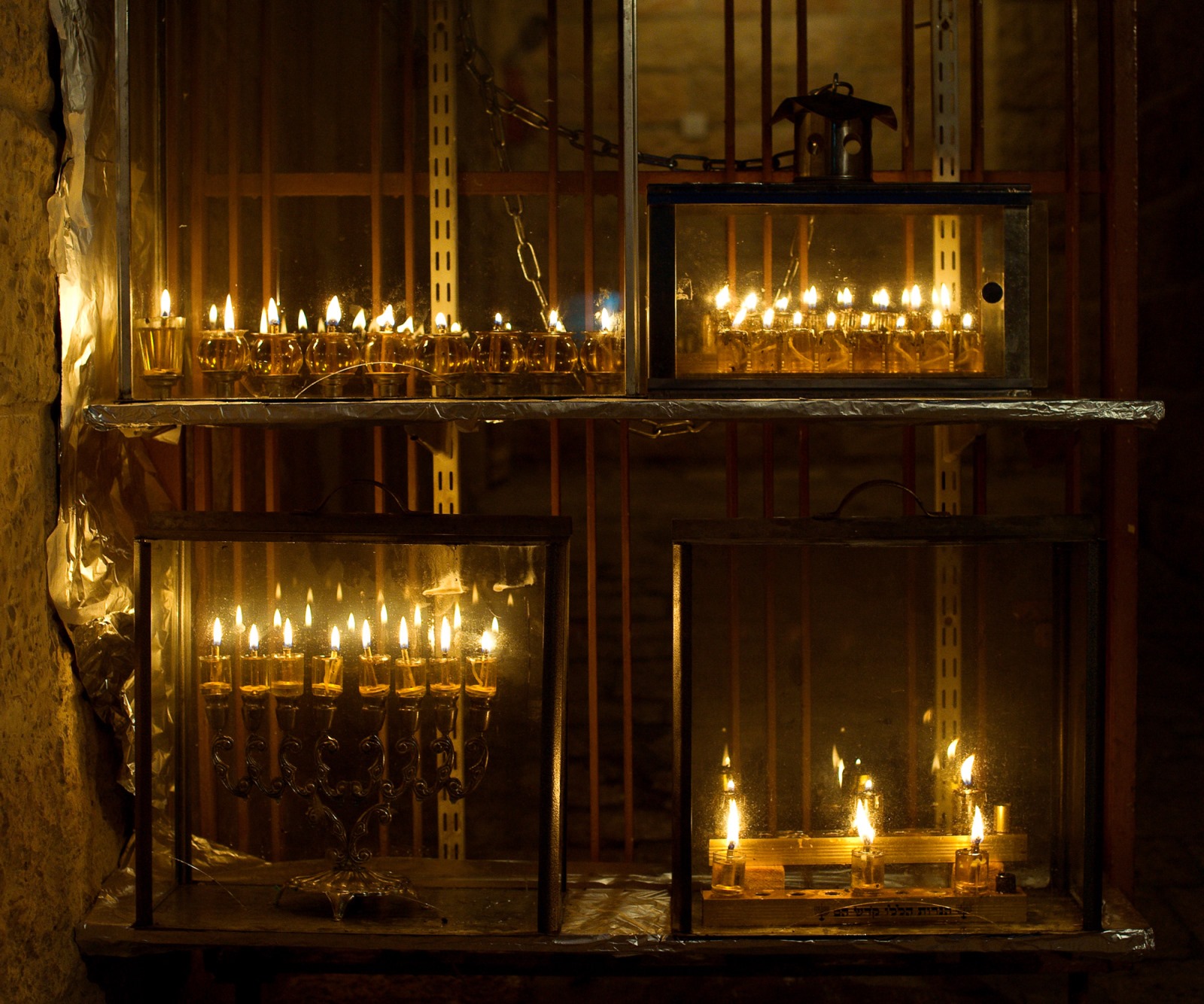 Menorahs in protective glass housings outside a home in Jerusalem. Photo by Yehoshua Halevi

This custom is widely observed in Israel and Jewish communities around the world. For eight consecutive nights, the illuminated menorah (hanukkiyah) is placed at one’s doorstep, gate or inside a large picture window facing the street where it can be seen by passersby. 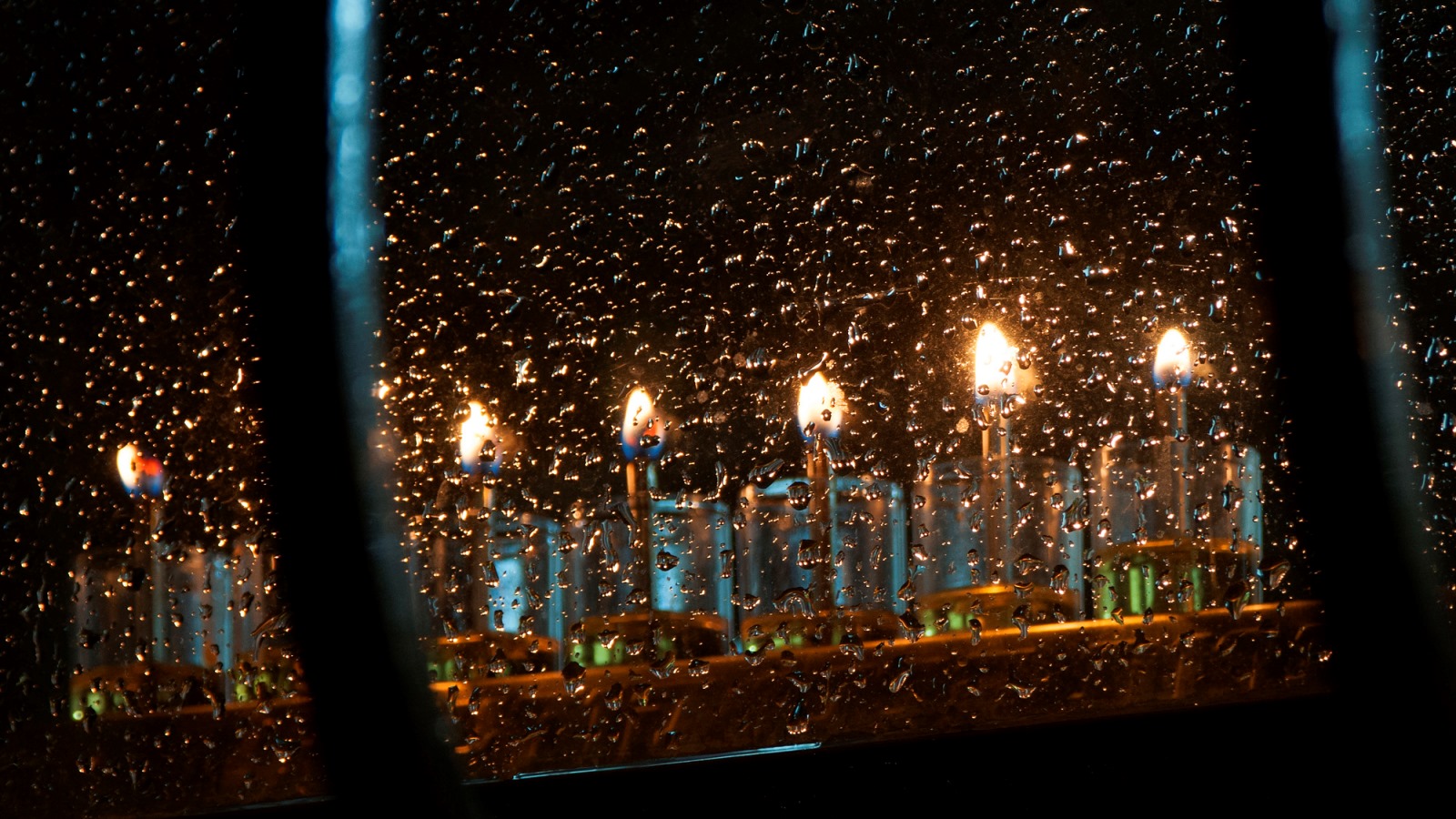 Hanukkah oil lamps burn brightly in a glass housing during a rainstorm in Jerusalem. Photo by Yehoshua Halevi

The public display of hanukkiyot turns the Festival of Light into a spectacle of sight. Many families have the custom of each member lighting his or her own menorah, and it is not uncommon to see seven or eight menorahs glowing brightly in a window or glass case outside the home.

The best places to view hanukkiyot are the observant neighborhoods beginning right after sundown, when most residents do the lighting ceremony. 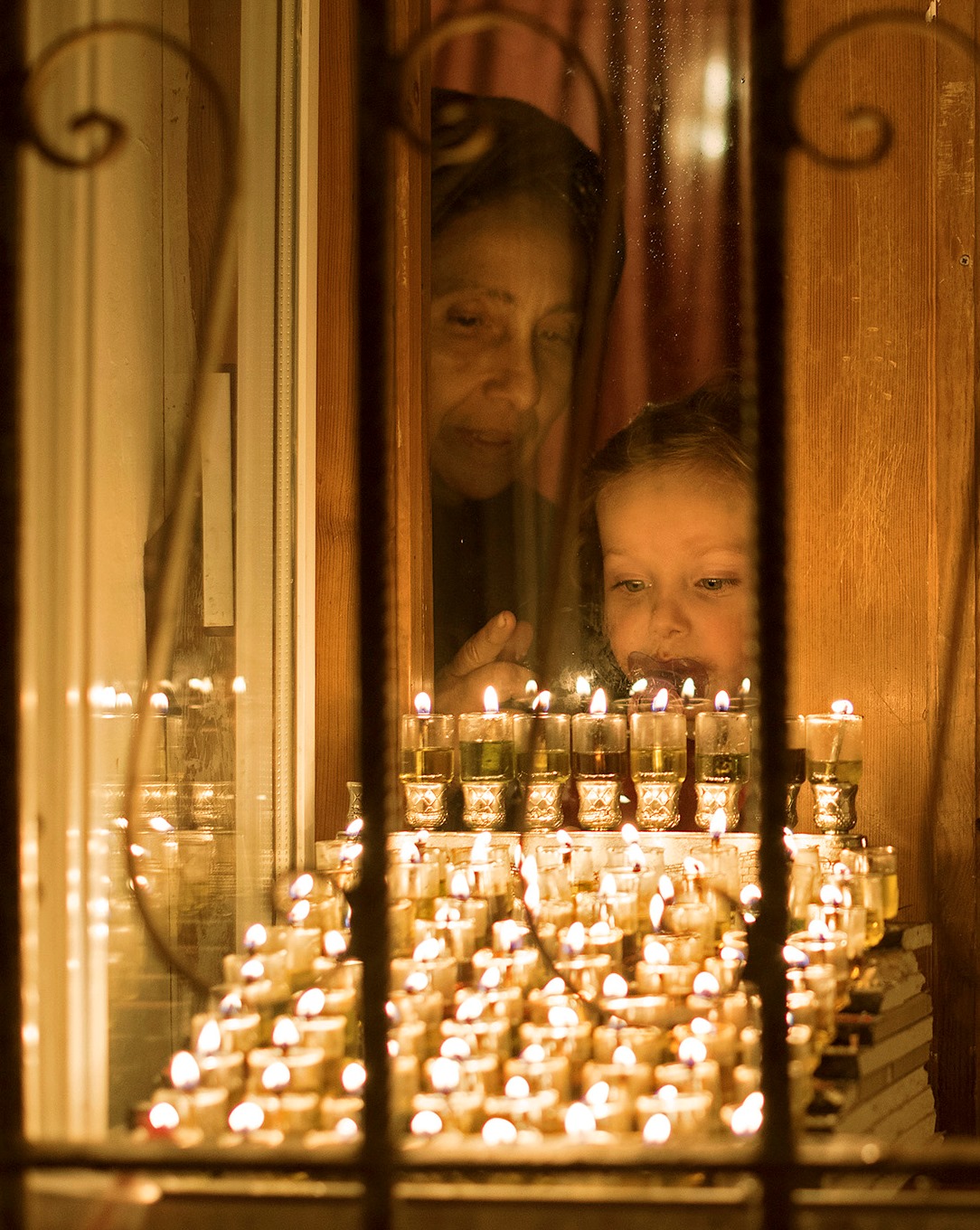 A woman and child observe Hanukkah lights aglow in the front window. Photo by Yehoshua Halevi

In Jerusalem, the Jewish Quarter of the Old City, Mea She’arim, Geula and Nachla’ot are excellent destinations to view many unique hanukkiyot in full view to the public. The Jewish Quarter has become a popular destination, especially on the eighth night, with some residents offering hot drinks, stories and explanations of their distinctive menorahs. 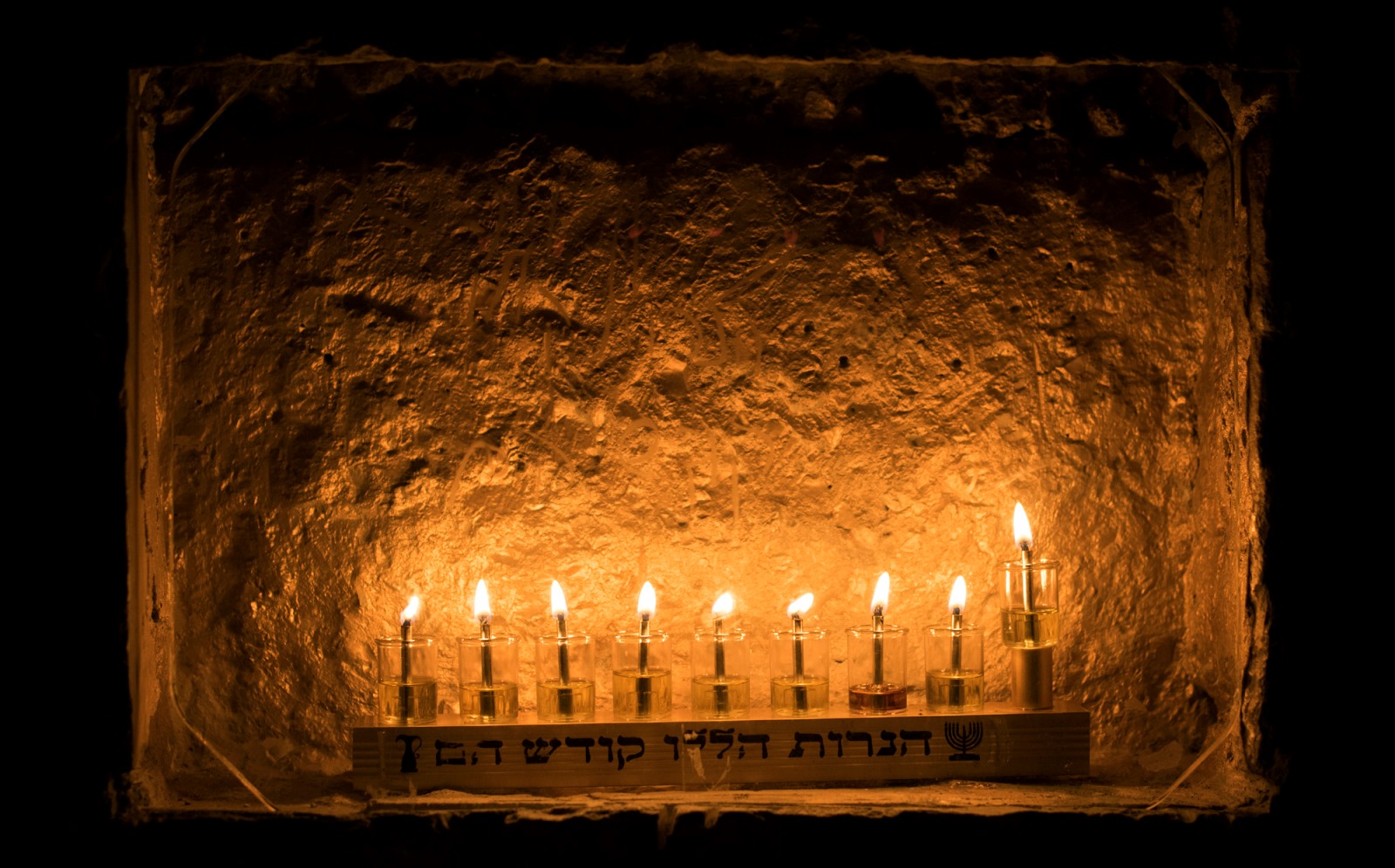 An oil menorah sheltered in a stone cubicle outside a home in Jerusalem’s Old City. Photo by Yehoshua Halevi

For a more enlightening treat of the holiday’s visual delights, visit a hotel lobby where guests often light candles on a single table in the lobby and one can gaze at a dozen or more menorahs ablaze simultaneously. 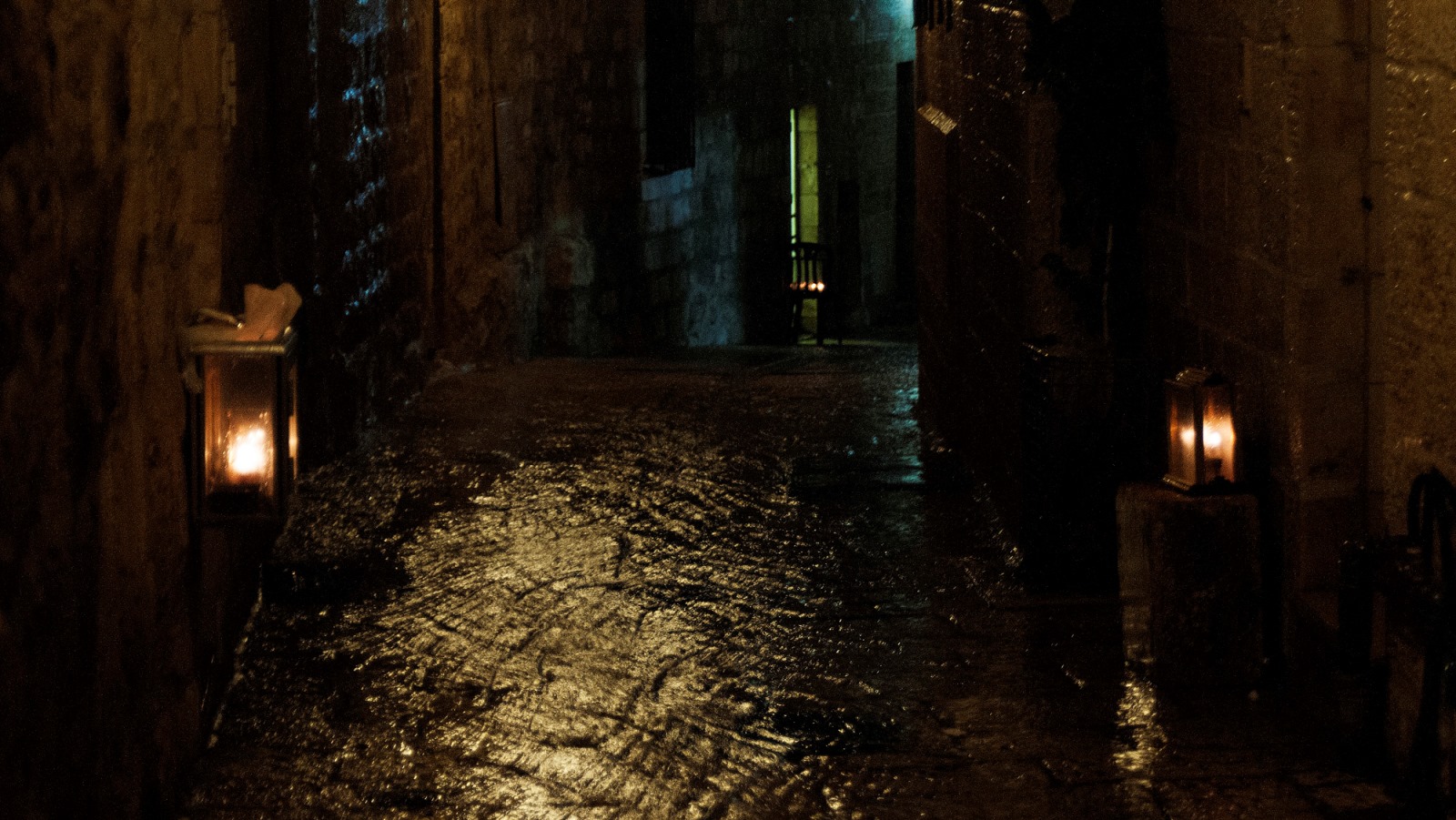 Water floods a street in the Jerusalem’s Old City during a downpour on the eighth night of Hanukkah. Photo by Yehoshua Halevi

A winter stroll is also likely to generate a little appetite, but not to worry. The metaphor of the oil outlasting its normal expectancy has seeped into other traditions of the holiday, such as eating foods fried in oil.

In Israel, donuts are not generally consumed year round, but on Hanukkah, bakers become artists and genially compete to see who can design the most colorful and scrumptious sufganiyot. 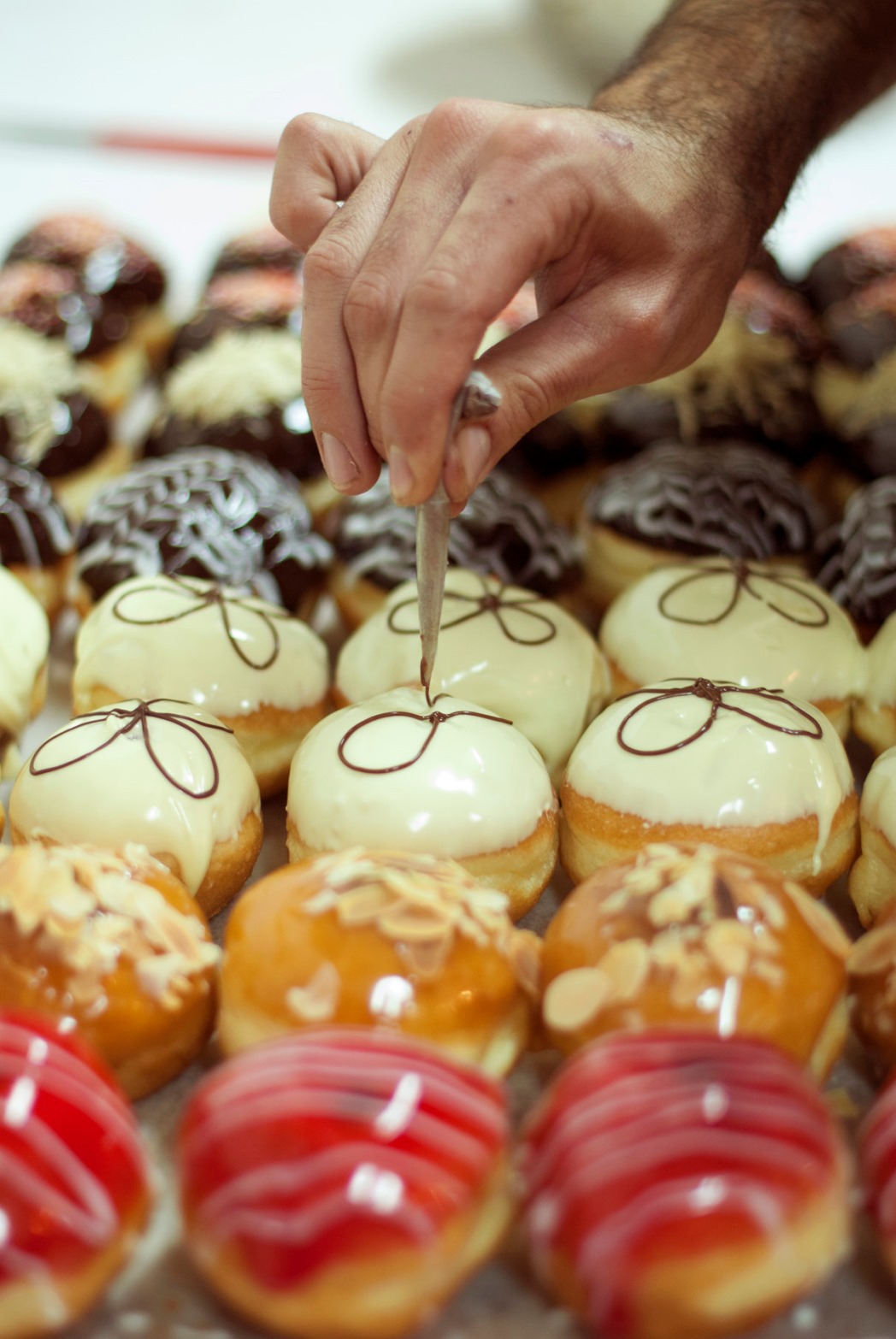 A baker applies the finishing touches to a freshly baked tray of donuts. Photo by Yehoshua Halevi

The quantity and variety of donuts are sure to please any palate and, along with the flickering oil lamps and candles, shed a little light and warmth on a long winter night. 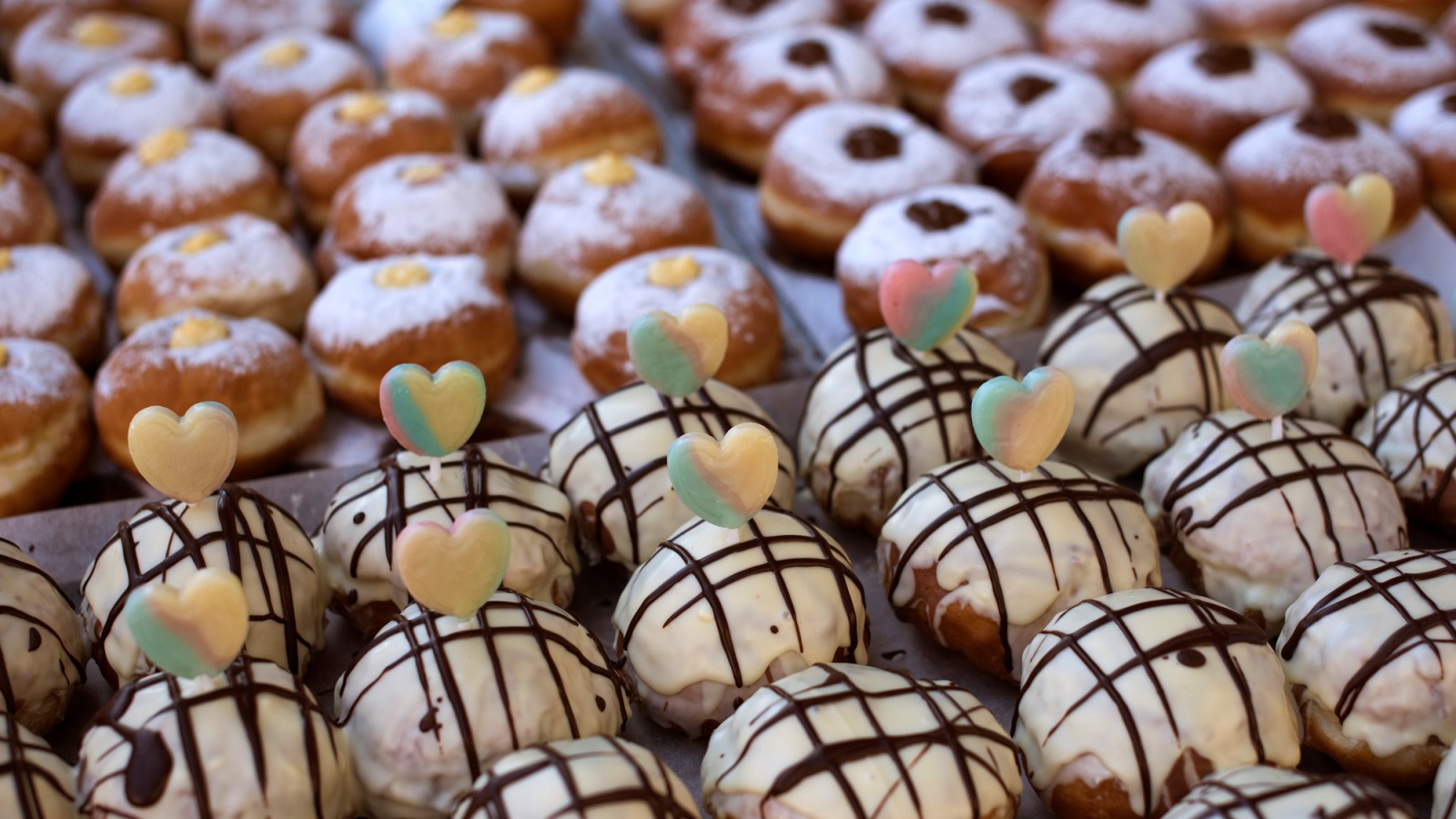 A wider variety of toppings and fillings has led to a surge in the donut’s popularity in Israel. Photo by Yehoshua Halevi 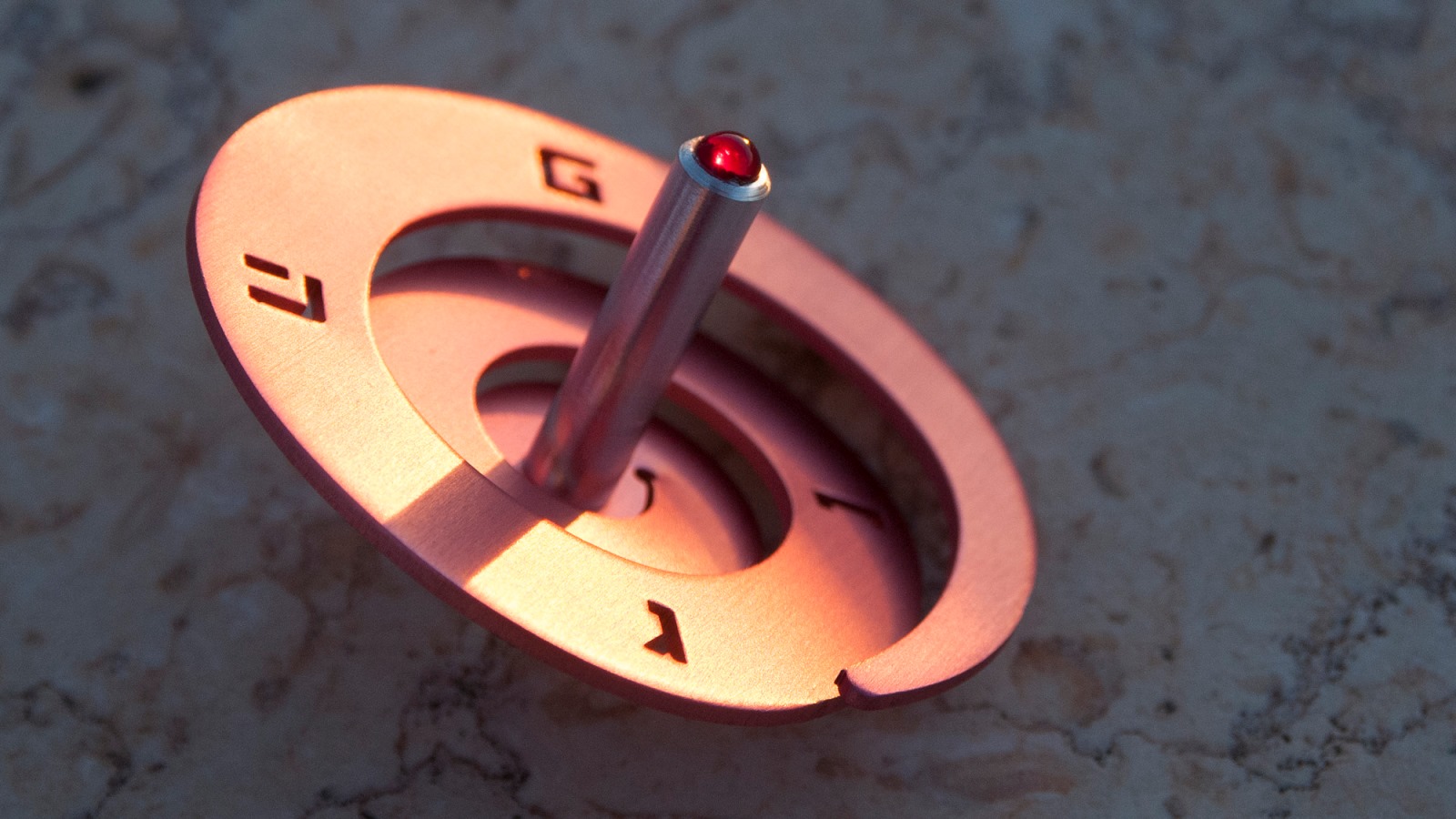 The Hanukkah dreidel game features a spinning top with four Hebrew letters – nun, gimel, hey and pey – which stand for “a great miracle happened here.” Photo by Yehoshua Halevi
UNCOVER ISRAEL - Get the ISRAEL21c
Weekly Edition free by email
Sign Up Now!
Give
Every
Month
Help ISRAEL21c uncover
the Israel we love