Where can you travel through 5,000 years of history in 10 stops? Jerusalem, the city that was proclaimed the capital of the Kingdom of Judea in 1,000 BCE and is the capital of Israel today.

In addition to the Israel Nature and Parks Authority’s City of David archeological site just outside the Old City walls, we recommend the following sites to get a glimpse of what life was like in Israelite and Hasmonean times; as well as under Babylonian, Greek, Roman, Byzantine, Mamluk, Ottoman, and British rule. 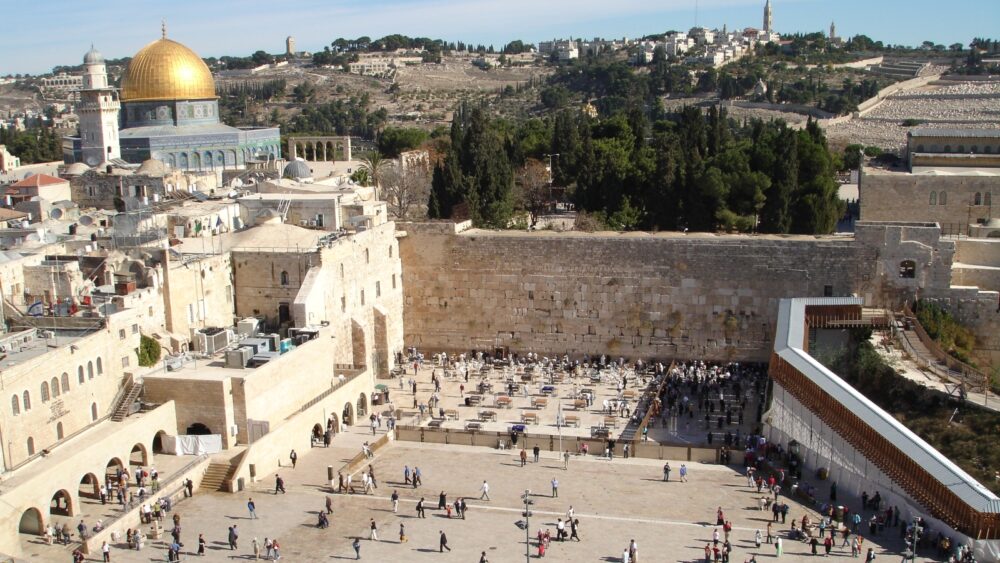 In the Second Temple era (597 BC – 70 AD) King Herod built what was to become Jerusalem’s archetypal archeological site on and around the Temple Mount. The Western Wall, part of the outward wall of the Second Temple courtyard, was built using stones up to 14 meters wide.

Tradition has it that this wall was built thanks to donations from the Jewish poor; and that it will never be destroyed. But only part of the ancient wall is visible at the Western Wall Plaza, one of Israel’s major attractions for tourists and locals who come there to pray or connect with ancestral energy.

Inside the Western Wall tunnels on the northern side of the plaza, guides show what archeologists discovered hidden from view: gigantic stones, Second Temple-era homes, ancient cisterns, constructions from the Muslim period, and an aqueduct from the Hasmonean period, among other treasures.

Click here for information on the two tour routes available and to make reservations. 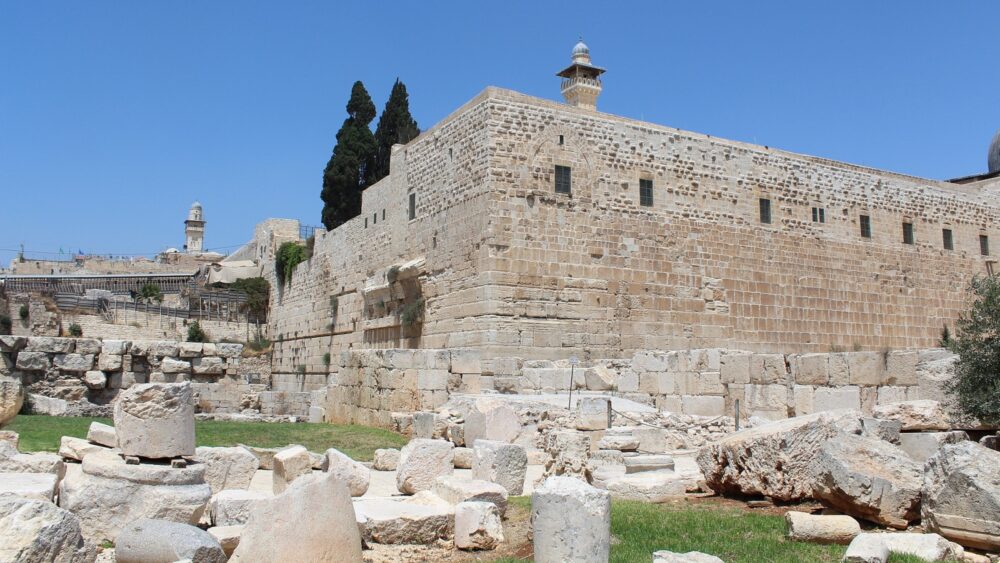 Close to the Western Wall is an impressive archeological park, educational center and museum covering 5,000 years, from the Canaanite period (Bronze Age), through the First and Second Temple periods, to more recent Christian and Muslim structures.

The site’s earliest find, the first of many gems, is a First Temple-era gate. Near it, the seal of eighth century BCE King Hezekiah (who ruled 727-698 BCE) was uncovered, as well as another seal, possibly belonging to the prophet Isaiah. The site includes Robinson’s Arch, the oldest stone overpass in the world; a wide Herodian road; a staircase leading to the Temple; and ritual baths.

The Davidson Center, housing excavated treasures, is located in what were once the basements of immense Umayyad palaces, destroyed in an earthquake circa 749 CE. 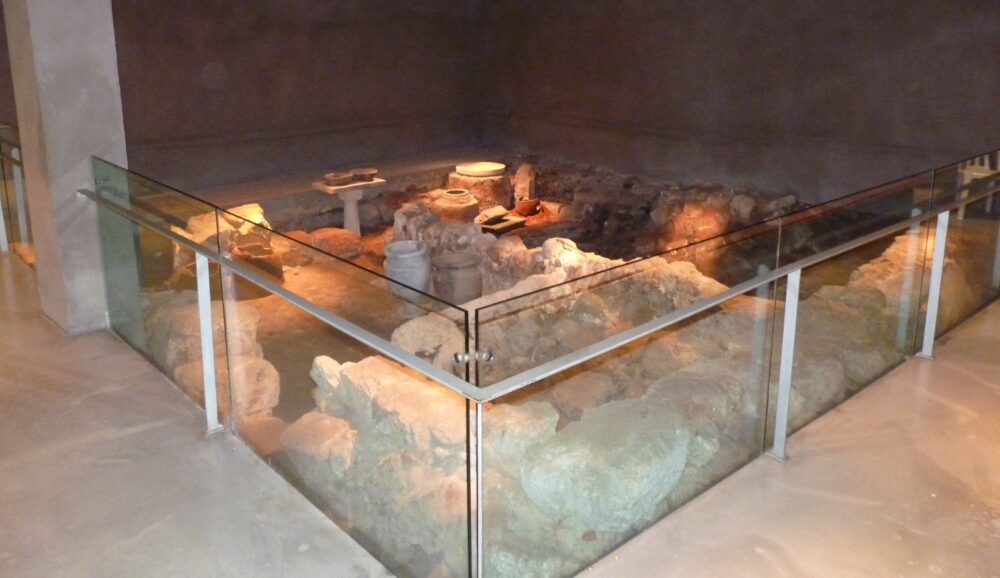 A display of artifacts in the Burnt House. Photo by Ricardo Tulio Gandelman via Wikimedia Commons

The Burnt House contains the in-situ ruins of a home in a wealthy residential neighborhood, destroyed by the same fire in 70 CE that the Romans set to burn the Second Temple.

Prof. Nachman Avigad discovered it in 1970 as construction workers dug out a pit for a new building, marking the first encounter with remains of the destruction. 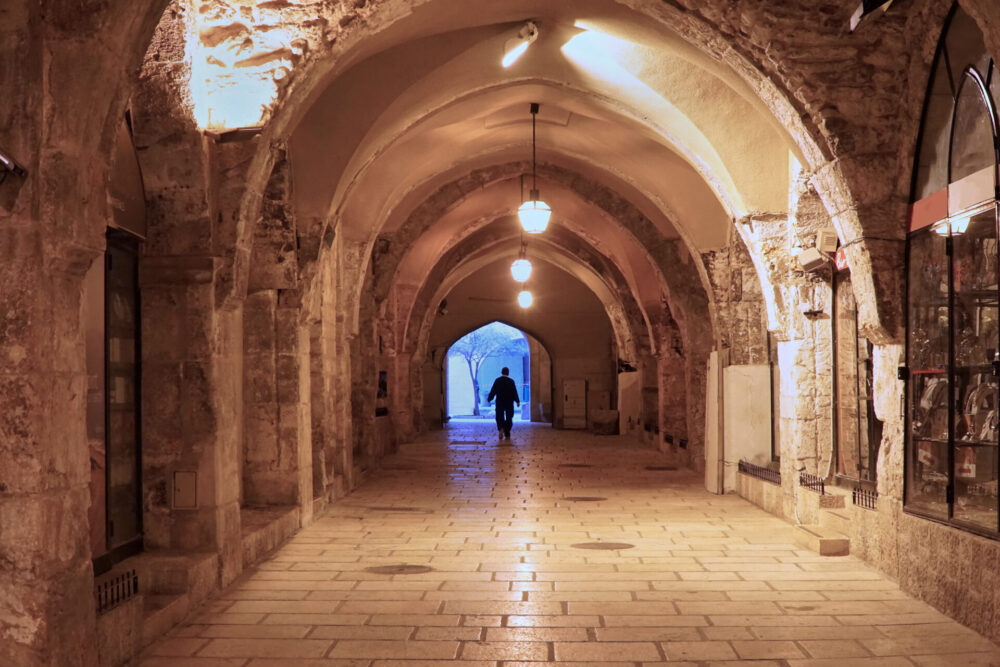 Inside the Cardo. Photo by Spiroview, via Shutterstock

The Old City’s Cardo is an ancient Roman road decorated with columns, running from the Damascus Gate through the Christian and Arab markets, and ending at Zion Gate.

A mosaic map of Jerusalem, excavated in a Byzantine church in Jordan, was the first evidence of the existence of this ancient open market. The northern section of the Cardo dates to Roman times. The southern section was built in the Byzantine period, in the sixth century CE. 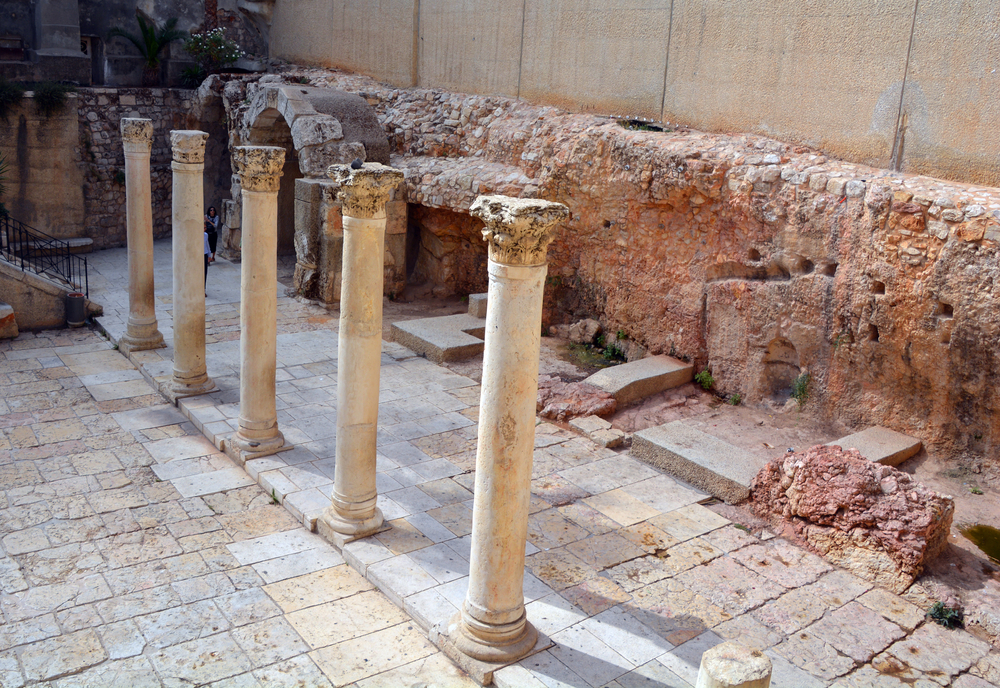 The ancient Roman columns of the Cardo in Jerusalem. Photo by Guilherme Mesquita, via Shutterstock

In the Old City’s Jewish Quarter the excavated road combines covered areas – lined with art galleries and upmarket souvenirs – and open-air areas as it snakes along, with Chabad Street above it. 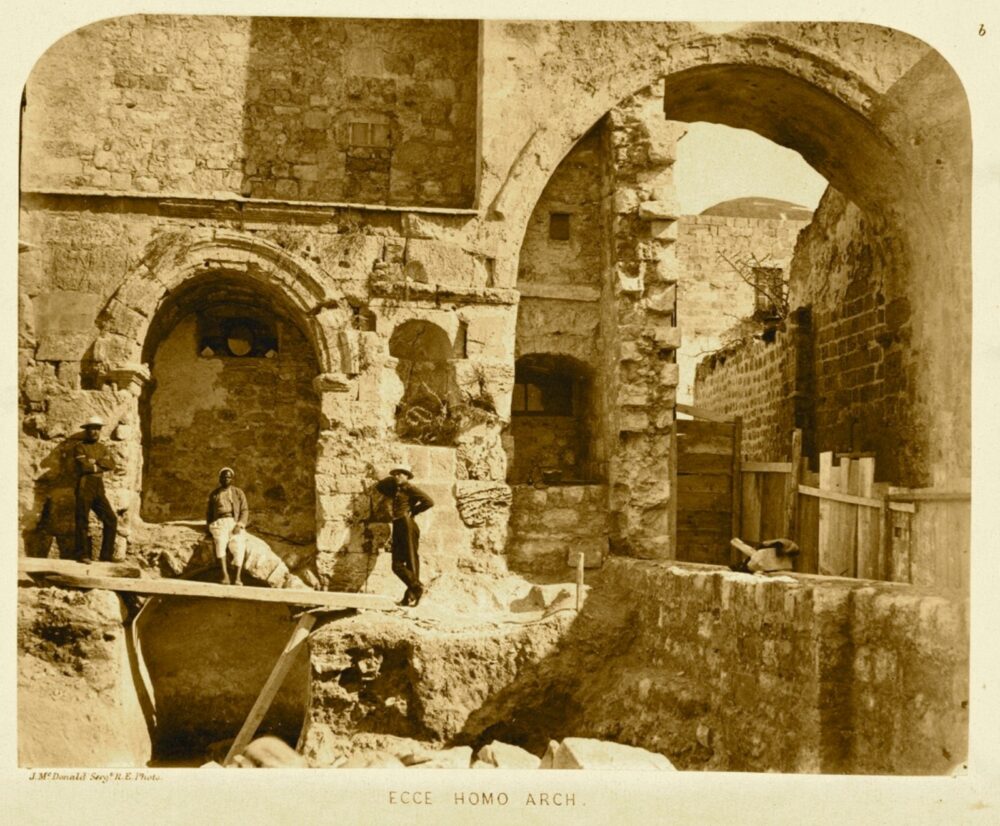 An 1864 photo of the Convent of Sisters of Zion (Ecce Homo). Photo via Wikimedia Commons

Under the Convent of the Sisters of Zion in the Old City, built in 1857 near the eastern end of the Via Dolorosa, lies the Struthion Pool, carved out of stone in the Second Temple era.

Today a large cuboid cistern, the Struthion Pool was originally open and built by Herod in the first century BCE. It was further embellished by Hadrian in the second century. It is believed to be the pool referenced by Judeo-Roman historian Flavius Josephus in 70 CE when he writes of Titus’ siege of the Antonia Fortress during the Great (Jewish) Revolt.

The Convent of the Sisters of Zion includes the Church or Basilica of Ecce Homo, named for Pontius Pilate’s “Ecce homo” speech, which may have been given on the pavement below the church. 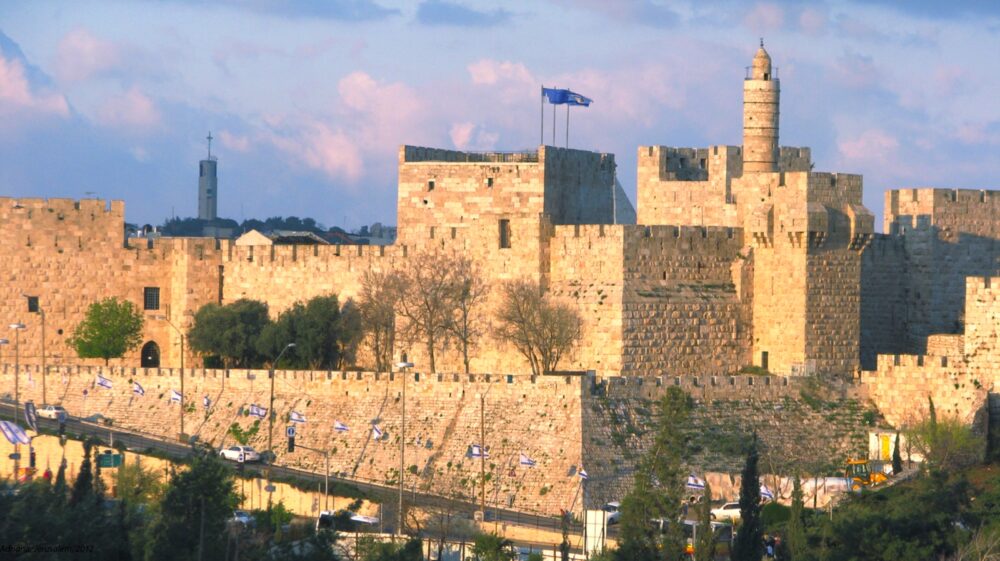 Tower of David. Photo by Adriana Lobba via Wikimedia Commons

The in-situ archeological treasures of the Tower of David complex are over 2,500 years old.

Built by the Hasmonean Jews who rebelled against the Syrian-Greek occupation and created their own brief kingdom, the building originally had three equal-sized towers. Herod eventually replaced the northeastern tower with a larger-sized structure.

Believing (mistakenly) that this tower had been King David’s palace, fifth century Byzantine Christians called it the Tower of David. This name was officially adopted for the entire area of the citadel by Israel after the Six Day War in 1967.

The site houses the Tower of David Museum  dedicated to the showcasing history of the city. Its current architecture dates to the Mamluk (1250–1517) and Ottoman (1517 to 1917) periods. 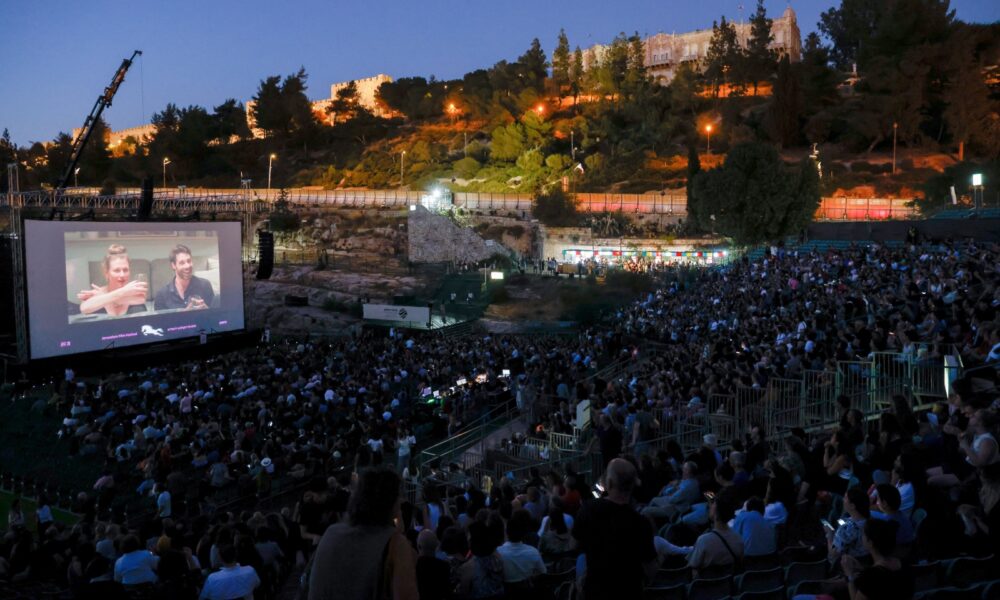 Sultan’s Pool was an integral part of Jerusalem’s water supply system from the late Second Temple to the late Ottoman eras. A dam built across the Valley of Hinnom created a water reservoir by impeding drainage south towards the Kidron Valley.

In biblical times, the Valley of Hinnom was a site for ritual sacrifice to pagan gods, and later became a garbage dump.

Renovated and enlarged by Sultan Suleiman the Magnificent in the early Ottoman period, the pool came to be called the Sultan’s Pool. He also built a walkway over the dam for pedestrians. Today, Hebron Road passes over the dam.

Situated just below the walls of the Old City, the area is dry and serves as a major venue for fairs and concerts. 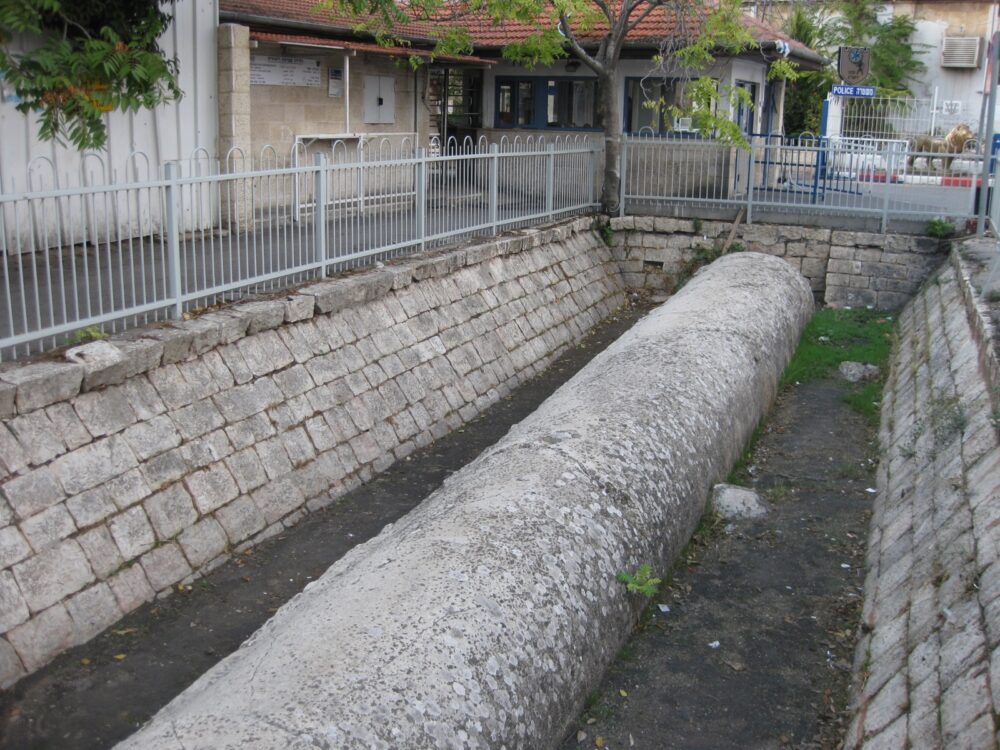 The Finger of Og aka Herod’s Pillar is a gigantic stone pillar in front of the Russian Compound in downtown Jerusalem, apparently abandoned because of a flaw that appeared as it was being carved out of the rock.

Named after the biblical giant Og, King of Bashan, the column is 12 meters long and 1.75 in diameter, and could have been intended for use in the Second Temple as renovated by Herod (first century CE), or in the later Byzantine Nea Church (third to seventh century CE).

The 60-ton pillar was uncovered in 1871 during the digging for the foundations of the church opposite.

A cave in Beit HaKerem contained a collection of tiles, glass vessels, pottery fragments, masonry stones, and the remains of an olive press from the Byzantine period.

Many archeologists believe that the biblical Beit HaKerem, a major administrative center in those times, was located at the site where Kibbutz Ramat Rachel stands today.

Which leads us to our final stop…

The ancient stones around Kibbutz Ramat Rachel (founded in 1926) overlook Bethlehem and the traditional site of Rachel’s Tomb. Excavation began there in 1930, uncovering archeological treasures over the years.

Later excavations revealed a palatial building with an unparalleled waterworks system. Some archeologists identify it as the House of Baal from 2 Kings, 11:18, built during the reign of the usurper queen Athaliah (842–837 BCE), who established the cult to Baal for six years in the Kingdom of Judah.

The area has also been identified as the earlier biblical Beit HaKerem (Jeremiah 6:1). After the destruction of the First Temple in 586 BCE, the political and economic center was moved to Beit HaKerem.