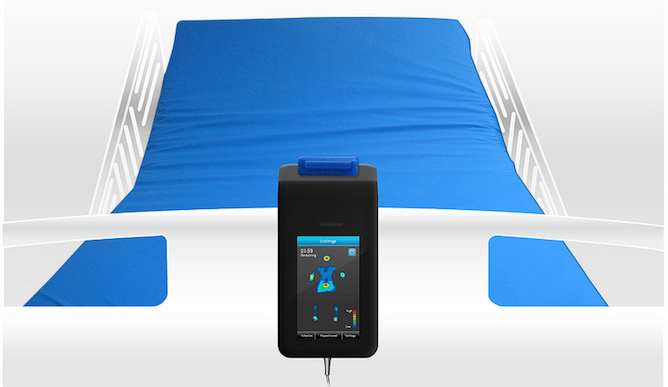 M.A.P. consists of a pressure-sensing mat wired to a monitor.

Hospitals across the United States are installing the Israeli-devised MAP (Monitor Alert Protect) system — the world’s first continuous bedside monitoring device to display, in real time, where a patient is developing high-pressure points that lead to bedsores.

MAP consists of a pressure-sensing mat that sits on top of the bed, wired to a monitor that provides color-coded visual feedback for repositioning patients so that pressure points on the body are consistently rotated. The system can be customized for each facility and even for each patient.

The renowned Mayo Clinic in Minnesota is among the hospitals to adopt MAP, which was the brainchild of Ran Poliakine – the consumer electronics visionary behind Powermat  wireless rechargers. He developed MAP through the Jerusalem-based company Wellsense.

According to the Mayo Clinic website, bedsores — also called pressure sores or pressure ulcers — are injuries to skin and underlying tissues from the prolonged pressure that occurs when people are confined to bed in acute-care and long-term care settings.

If not caught early, these painful wounds can eat flesh away right down to the bone. Frequent repositioning prevents bedsores, but previously there was no precise way to detect which areas of each patient’s skin are most in danger of ulcerating.

This widespread problem costs the US healthcare system an estimated $12 billion in direct treatment costs, not counting associated costs such as medical malpractice lawsuits. 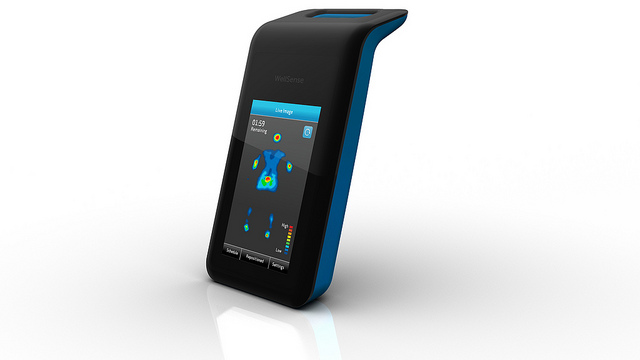 The monitor shows exactly where pressure points are putting the patient at risk of bedsores.

Poliakine realized that a proactive solution was critical, especially with the introduction of the “never event” list in the United States. Never events are preventable situations for which US hospitals, starting in 2013, no longer get federal healthcare reimbursement. Advanced bedsores account for 40 percent of “never events” in hospitals. Another 30% are due to injuries from bed falls, a problem for which MAP also provides a unique solution.

Wellsense CEO Eitan Machover says that when Poliakine read about the never event list in 2009, he approached renowned Israeli scientist, engineer, author and teacher Amir Ben-Shalom to devise a solution for preventing bedsores.

Ben-Shalom, who is also the principal curator at Jerusalem’s Bloomfield Science Museum, came up with a “smart” textile technology concept. A prototype was ready by 2011 for beta testing, and the product hit the US market in 2012. Though it earned the European Union’s CE Mark, for now sales efforts are focused on the United States.

“We have sold about 1,000 units to date, installed in about 60 US hospitals,” Machover tells ISRAEL21c.

Some of those units were purchased by Wellsense partner Universal Hospital Services, a large company that rents equipment to healthcare facilities nationwide.

Machover stresses that MAP’s effectiveness is well validated. “We have over 15 case studies published and two major clinical studies,” one published in December in WOUNDS and another scheduled for March in the American Journal of Critical Care.

A study of MAP at the Henry Ford Hospital in Detroit showed a significant reduction in pressure sores acquired in the medical intensive care unit over the two-month trial period, from a 5% incidence rate the prior year to 0.3% during the time MAP was used.

The Ford report pointed out that because patients and their families can easily interpret the color-coded feedback on the monitor, MAP had an unexpected benefit:

“In one case, an at-risk, obese patient, who often refused turning, was able to visually see how pressure was increasing and which areas were affected. He better understood the value of turning, was much more compliant, and began to participate in his own care,” the study noted.

“The key for us is to be able to further integrate our solution into the workflow of the nursing staff and wound prevention staff,” says Machover, who came to Wellsense in January 2013 after a long career in the field, including positions with GE Healthcare and two medical-device venture capital funds.

“We are talking to other strategic players about global distribution rights on a non-exclusive basis,” he adds.

In addition to hospitals and long-term care facilities, the MAP system will be introduced to the home-care market.

“More patients are being discharged to home care, and the studies show that the prevalence of pressure ulcers at home may be triple that in hospitals,” says Machover.

In the near future, the system will become wireless and able to communicate with multiple devices and caregivers, providing remote access and monitoring both for pressure sores and bed falls.

“We can monitor movements of the patient and visualize their position to predict risks, such as bed falls, in advance,” Machover explains. “Most solutions today just show whether the patient is on the bed or off the bed. We can be predictive and send an alert with an image stamp for a higher level of confidence for the caregiver. Visual confirmation will be very important to assure the situation is really serious.”