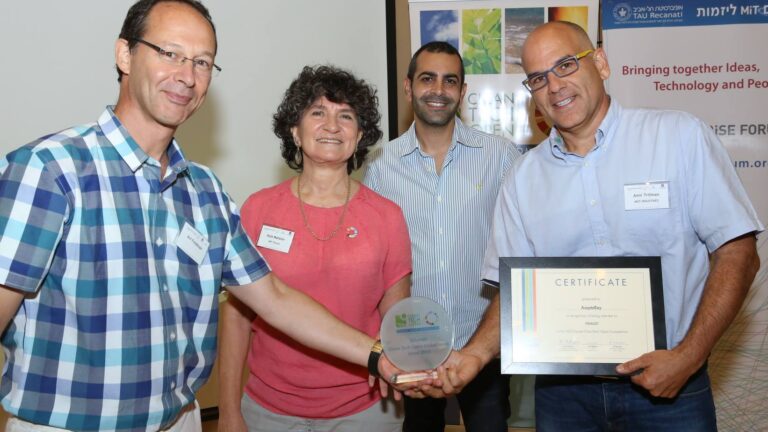 AseptoRay’s management accepting their award at the 2015 Cleantech Open finals in Tel Aviv. Photo via Facebook

The Israeli startups AseptoRay and Chakratec took top honors in last month’s Israeli finals in the 2015 Cleantech Open Global Ideas Competition, the world’s largest green technology competition. They will represent Israel in the international round to be held during Global Entrepreneurship Week, November 16-22, in Silicon Valley.

Encompassing 24 countries, the competition is designed for startup companies that have a technology or product breakthrough in energy generation, energy efficiency, water and waste, smart-grid technology, energy distribution and storage, green building or smart transportation.

Aseptoray of Ma’alot won in the first track for its eco-friendly pasteurization system that saves 73 percent in energy costs compared to standard heat pasteurization and inactivates even heat-resistant bacteria in all liquids while improving their quality, nutritional value and taste.

Chakratec of Lod won in the second category for its economic and eco-friendly kinetic battery electricity storage system for solar fields, wind farms and other renewable energy plants.

The other finalists in the first category were G.A.L Water Technologies for its GalMobile; Kando for its 24/7 wastewater management, monitoring and sampling system; and SolView smart analytics system for automatic online estimation of rooftop solar energy potential.

In other Israeli clean-tech news, 13 Israeli companies led by Chief Scientist at the Israeli Ministry of Economy Avi Hasson are participating in a roadshow in central cities in China this week, where they are presenting their technologies in clean-tech, energy, water and environment to local Chinese companies, investment firms, government officials and research authorities.