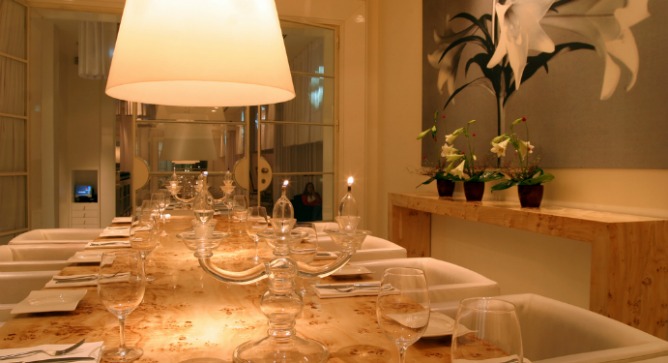 Messa is often cited for its opulent décor.

Tony Blair, Pink and Jean-Claude Van Damme are among a roster of celebs who’ve sampled Chef Aviv Moshe’s dishes at Messa near the Tel Aviv Cinematheque — intrigued, no doubt, by the eatery’s inclusion on the 2005 Condé Nast Traveler global Hot Tables list, and recommendations by Italian and French restaurant critics including Gilles Pudlowski.

After eight years, Messa is still getting attention. In June, The Address magazine included Messa as one of nine “must to-do list” destinations. The Lonely Planet review gushes: “More than a restaurant with impeccable haute cuisine, Messa has a magical quality that raises the restaurant experience to a new level. … Following your meal, spare time for a drink in the stunning jet-black bar.”

Chef Moshe tells ISRAEL21c he fashioned Messa like upscale bar-restaurants in London and New York – the cities where he dreams of expanding his brand – combining a high level of food, design and atmosphere. Daringly, he installed one long dining table so that disparate patrons can mingle.

The most popular choices at this non-kosher chef restaurant are seafood couscous in crab and lemon thyme broth, crab gnocchi, goose-liver carpaccio, and an appetizer of goose liver coated in Valrhona white chocolate.

Moshe explains that the menu has swelled to 35 first courses and close to 30 main dishes “because our regular customers don’t want us to take anything off the menu, and we’re always ready to add more.” Fortunately, the restaurant has a large staff of 125 people to handle all that volume.

Now 38, the Jerusalem-born chef of Kurdish ancestry has no formal training. Moshe served as a cook in the army and began his culinary career in 1992 at Château Ein Karem in Jerusalem, which set him on a course of exploring French cuisine. Today his style is a cross between Provencal and Grandma.

“Most of my free time, I used to spend at my grandma’s kitchen,” he says. She did not use recipes, so young Aviv watched her carefully to learn how traditional North African spices — the Moroccan blend ras el-hanout, cumin, paprika, turmeric and coriander — could pair up with such classic Middle-Eastern staples as eggplant, tahini, olive oil, the yogurt-like labane and pomegranate.

“Jerusalem is blessed with many kinds of herbs and spices that grow in almost every backyard,” says the bachelor chef who also enjoys soccer, fashion, sports cars and visual arts. 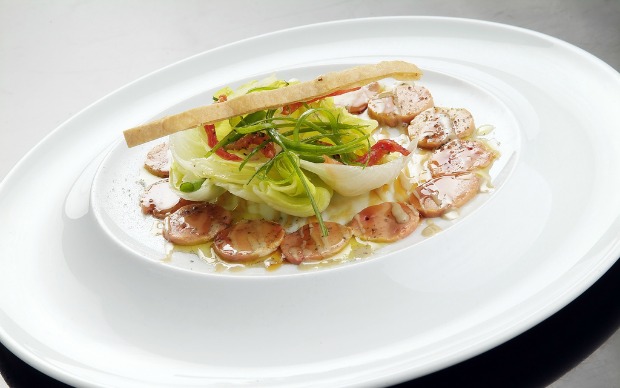 Moshe credits his mentor Shalom Kadosh, and TV cooking shows, with attracting the respect of foreign chefs for their Israeli counterparts in the past few years. He worked with Kadosh in 1996 at the Jerusalem Sheraton, which gave him the skills and confidence to create his first signature menu at Grappa, then one of the capital city’s trendiest eateries. In 1999, Moshe moved over to the critically acclaimed Hanevi’im 54, his only kosher establishment thus far.

But the food is, of course, front and center. Moshe began spreading his culinary wings at Tel Aviv’s now-defunct Baraka, which he transformed from a Moroccan restaurant to a chef’s restaurant. 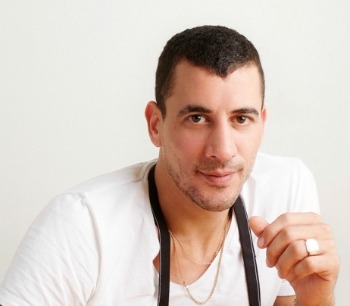 With no formal training, Aviv Moshe built one of Israel’s most famed restaurants.

“In Tel Aviv, I started to use different products like red tuna, king crab, lamb chop, foie gras. I’ve combined these products and the knowledge I gained during all of my cooking years, into my personal kitchen in Messa,” he says.

Moshe and three partners opened Messa in 2004 in the hope of redefining the Tel Aviv dining experience. It rapidly became one of the most successful culinary focal points in the city, frequented by personalities including Paul Anka, Pep Guardiola, Suzanne Vega, Gérard Depardieu, Rudolph Giuliani, Roberto Cavalli and Ron Lauder.

Aviv defines the 200-seat restaurant’s cuisine as “thrilling, far from simple and with a subtext of Mother’s kitchen.” One of his personal favorites is watermelon sashimi.

Here is what The Address had to say about Messa: “A must for any food lover, the haute cuisine restaurant comes with an impeccable gourmet menu, glitzy setting and very beautiful people. … The glamorous white-on-white dining hall is simply breathtaking. Lined with white upholstered armchairs, it showcases polished white marble floors, drapes and a long white communal table with a burl-wood top that runs down the center of the dining room. … The food’s creativity and innovation are courtesy of Aviv Moshe, who makes every meal a culinary treat.”