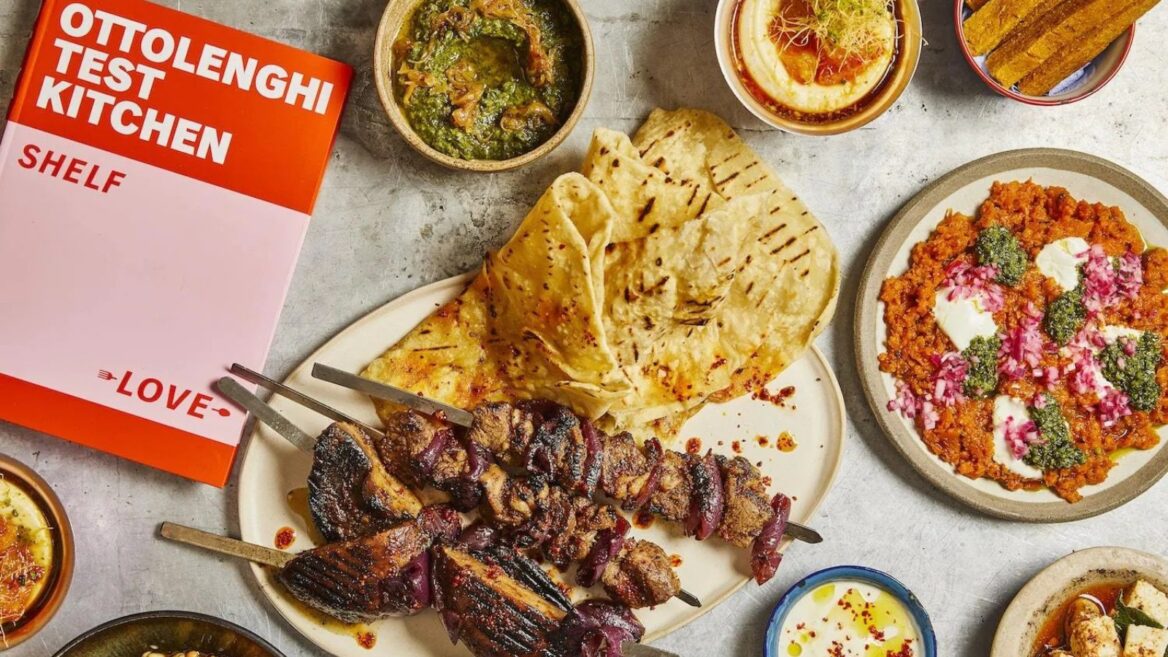 Once upon a time, people outside of Israel could only find Israeli-style soul food – and not much of it, really just falafel and hummus – in American cities with large Jewish populations.

Thankfully, those days are long gone.

From Dubai to Denver, from Paris to Portland, chefs born in Israel are transforming international cuisine with a taste of home.

Pretty much anywhere in the world, you can please your palate at an Israeli eatery. Follow us across the globe as we highlight some of the best-known expat Israeli chefs. 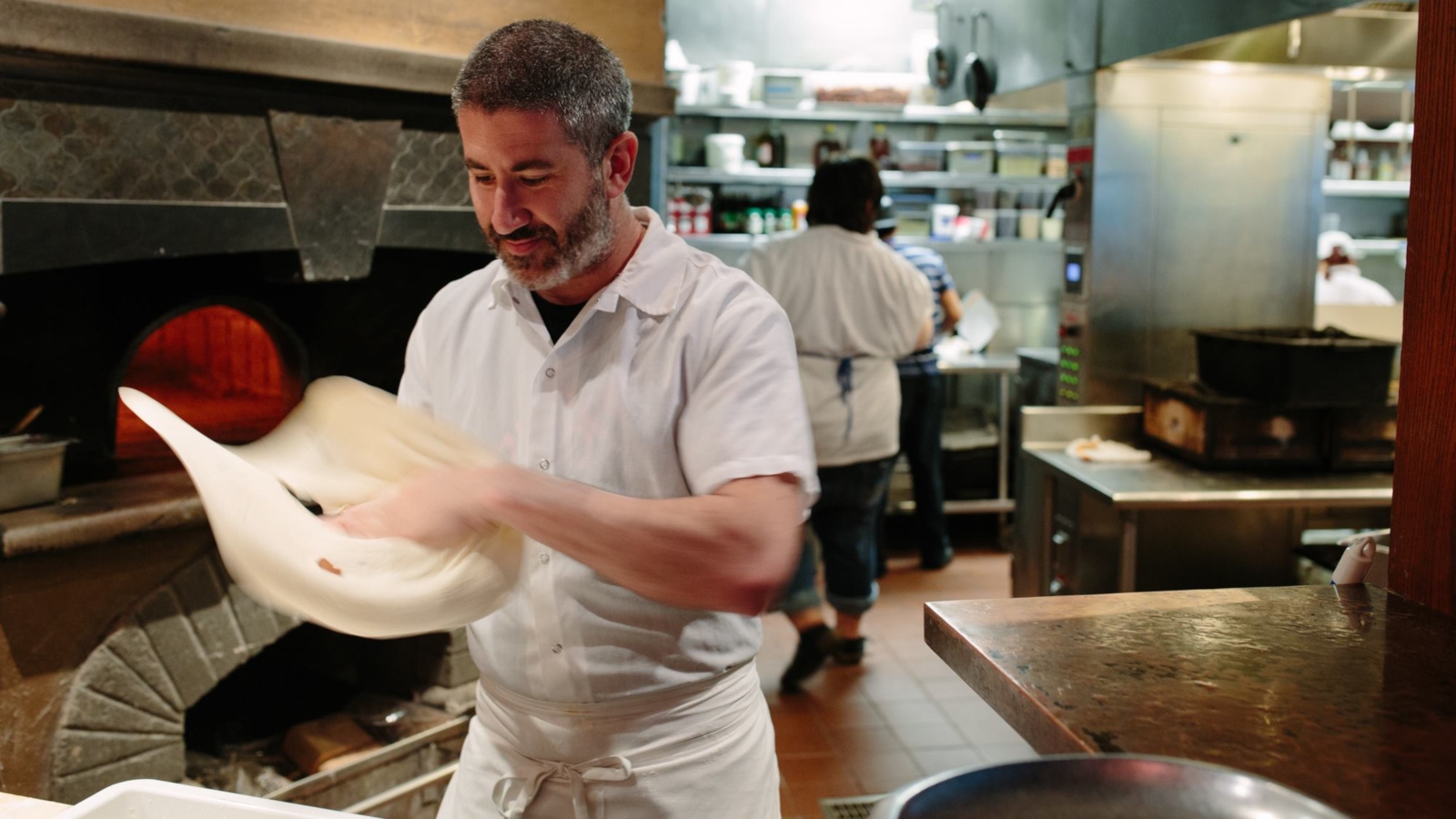 This multiple James Beard Award-winning chef and cookbook author was among the first to put Israeli-inspired dishes and Israeli-produced ingredients on American plates when he and partner Steve Cook opened Zahav (Gold) in 2008 in Philadelphia.

“I was fully aware of the responsibility of showcasing and celebrating all the cultures that make up Israel — not just shawarma, schnitzel and falafel,” Solomonov told ISRAEL21c back in 2011.

He introduced Mideast/North African flavors such as zhug, za’atar, chraime and malabi to eager diners.

Solomonov hosts the web series “Bringing Israel Home” and led a related culinary Passover tour in Israel with Via Sabra.

Born in Bat Yam and raised in Philadelphia, Alon Shaya started out by adding Israeli touches to the Italian menu at Domenica in New Orleans — for instance, roasted goat shoulder and vegetable shakshuka.

A few James Beard nominations and awards later, Shaya was ready to pay full homage to the culinary landscape of Israel by opening Saba (Grandfather) in New Orleans and Safta (Grandmother) in Denver along with several other ventures.

“With influences that stem from the Middle East, Europe and North Africa, Saba and Safta reflect a collection of moments where food and culture have crossed paths, offering a taste of this ever-evolving cuisine. Wood fired pita bread baked steps from the table soaks up the flavors of Bulgaria, Yemen, Syria, Morocco, Turkey, Palestine and Greece to name a few,” said Shaya.

Shaya is involved in food-centered humanitarian endeavors including the recent Purim-themed Hamantashen for Ukraine fundraiser. 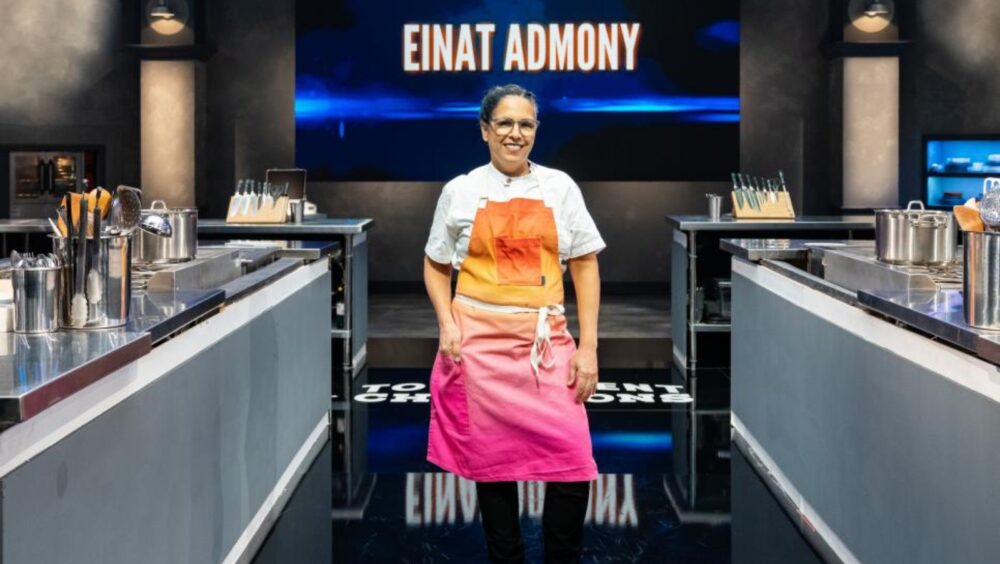 Chef Einat Admony in her “Tournament of Champions” appearance. Photo by Anders Krusberg

Her Middle Eastern eateries include 2022 James Beard-nominated Balaboosta (Yiddish for “homemaker”) and falafel chain Taim (Tasty) with branches in NYC and DC. Sadly, her Kish-Kash couscous bar did not survive the pandemic.

Admony is featured in the current season of Guy Fieri’s “Tournament of Champions” on the Food Network. She also wrote the cookbooks Balaboosta and Shuk and does standup comedy.

From sabich devilled eggs to Yemenite matzah ball soup, Admony is all about fun fusion – though we’ll take a hard pass on her chicken liver mousse sufganiyot. 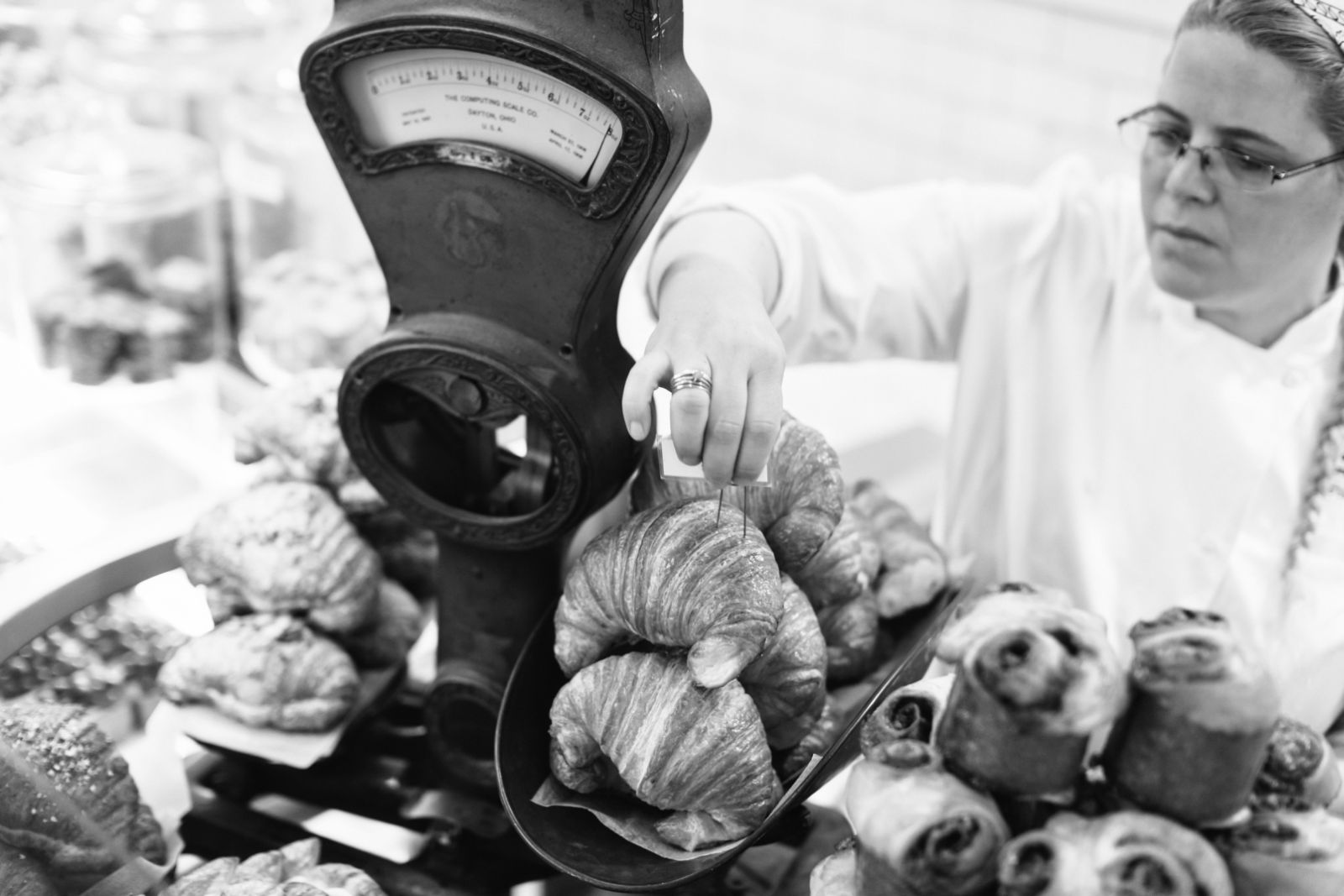 Tzurit Or displaying her popular croissants at Tatte. Photo courtesy of Tzurit Or

In 2007, Israeli emigrant Tzurit Or started selling her home-baked pastries at Boston-area farmers’ markets under the brand Tatte (Yiddish for “Daddy”).

Within a short time, Tatte opened to its first brick-and-mortar bakery in Brookline. Now there are 19 Tatte Bakery & Café branches in neighborhoods and communities around Boston and five in the metro Washington DC area.

“Tatte has to be an experience and it has to feel like home. When we open a location we have lines around the building because people have an emotional connection to our food but they also want to experience, to see the design. If people find home at Tatte, I’ve done my job well,” she told ISRAEL21c in 2017. 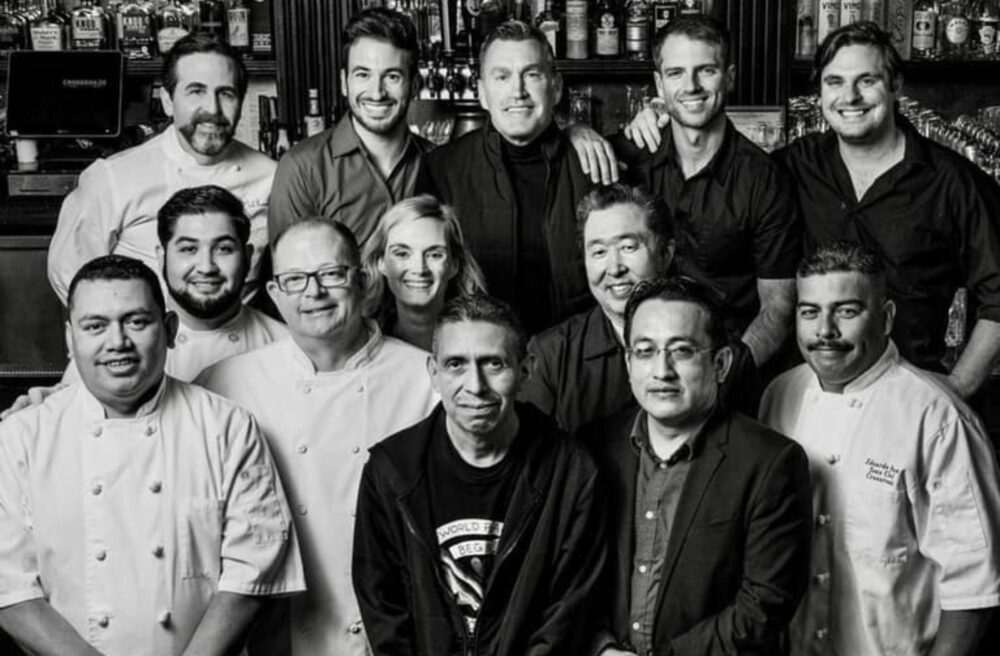 Tal Ronnen is the founder of Crossroads Kitchen in Los Angeles and bestselling author of The Conscious Cook and Crossroads: Extraordinary Recipes from the Restaurant That Is Reinventing Vegan Cuisine.

This vegan chef prepared the meals for Oprah Winfrey’s 21-day cleanse and has catered high-profile events including Ellen DeGeneres and Portia de Rossi’s wedding. He is on the board of Impossible Foods.

“Crossroads is an intersection where vegans, flexitarians, omnivores and meat eaters can cross paths to share a delicious meal and a good time. We believe great food should be enjoyed by everyone,” Ronnen said.

Ronnen opened Crossroads in 2013 and specializes in plant-based versions of good ol’ American mac-and-cheese and Philly cheesesteak, plus Italian and Mexican fare. You can also find Mediterranean-inspired dishes such as Shawarma Mushroom Bowl with pickled onion and lime parsley tahini.

The big news: Crossroads Kitchen is opening a Las Vegas branch this spring.

Without a doubt, Yotam Ottolenghi is the Israeli cooking king of the UK.

He and fellow chef/business partner Sami Tamimi hail from Jerusalem and have merged their often overlapping Jewish and Arabic culinary traditions into seven popular restaurants and more than a dozen cookbooks since 2002.

Ottolenghi is known for complex dishes and some of them have strong Israeli influences.

For example, menu items at his Rovi restaurant in London include celeriac shawarma with bkeila (a Tunisian Jewish spinach condiment) and fermented tomato; and Jerusalem mixed grill with Baharat onions, pickles, pita and tahini.

Here’s a video from the Ottolenghi Test Kitchen series.

These married Israeli chefs and cookbook authors started their careers in the kitchens of Ottolenghi establishments and went on to open three restaurants in the Fitzrovia district of central London: Middle Eastern-inspired Honey & Co. Honey & Spice deli and Honey & Smoke grill house.

They host a culinary podcast, “Honey & Co: The Food Sessions” and sell imported Mideast products such as halva, cardamom coffee and rose harissa.

Packer is a renowned pastry chef. You can try her recipe for Israeli-inspired tahini and preserved lemon cookies rolled in sesame seeds.

‘Chasing Smoke’: Sarit Packer and Itamar Srulovich on the beauty of cooking over fire https://t.co/5CcRW4fvPM pic.twitter.com/dCdXZb27SR

Eran Tibi (who also got his start with Ottolenghi, back in 2008) is owner and executive chef of Bala Baya in South London, which has been described as “a poem to Tel Aviv” and specializes in modernized Israeli home cooking along with cocktails.

Tibi has said that his earliest memories are helping his mother trim okra as soon as he could hold a knife and helping his father in the family bakery.

Gal Ben Moshe established Prism in Berlin with his wife and business partner, Jacqueline Lorenz, in 2012.

When Michelin awarded a star to Prism in 2020, the Michelin Guide explained: “In a chic, minimalist ambience, chef-owner Gal Ben Moshe offers up exciting cuisine that gives a nod to his Israeli roots as well as to modern European standards. His interesting dishes, made from excellent ingredients, are replete with contrasts and varying flavours. They are accompanied by first-rate wines recommended by much-lauded sommelier, Jacqueline Lorenz.”

The short menu features Levantine cuisine such as Lebanese lobster with fennel and harissa; and heirloom carrots with dukkah (an Egyptian herb-nut dip) and dates. 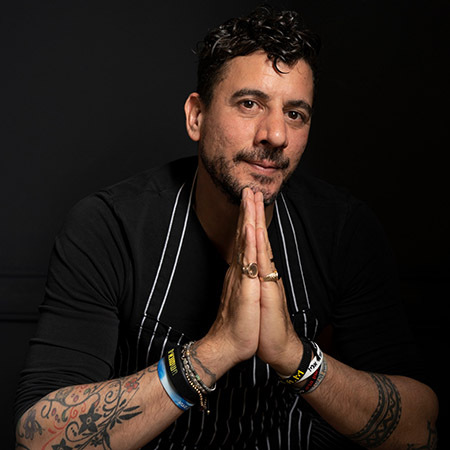 He grew up in Jerusalem to a family of Turkish Kurds and brought lots of home cooking to his cooking line. He made his name in Tel Aviv with Messa and Quattro before expanding to Berlin. Aviv also dabbles in television and radio programs, catering companies and lines of products sold in food chains. 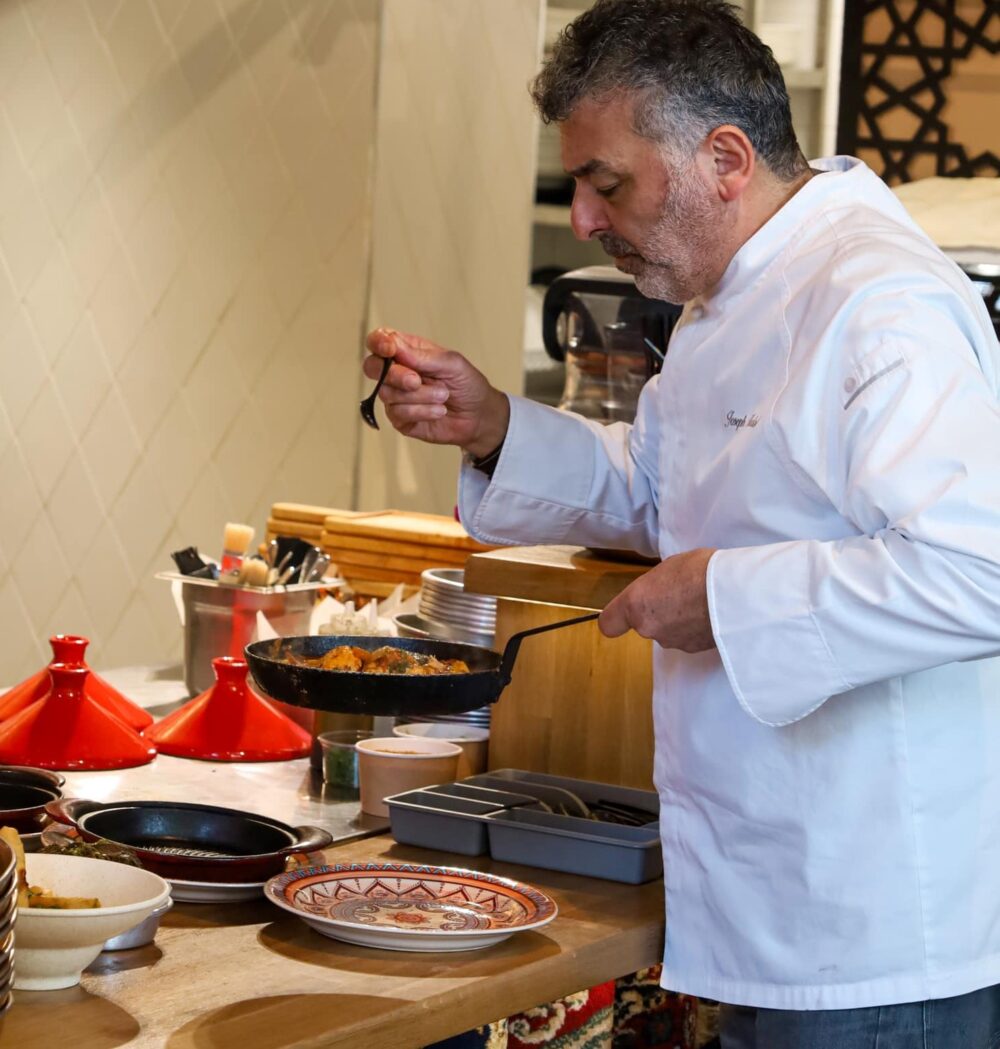 Joseph Hadad built his reputation in his early 30s as head chef of the King David Hotel in Jerusalem — hosting the likes of Bill Clinton, Madonna, Francois Mitterrand and George H. W. Bush.

He moved to Bucharest in 1997 and has established three restaurants: Caju brasserie (“where Joseph brings to table the tastes of his childhood, with strong Mediterranean influences”), Mace (“the meeting point between a gastronomic journey and a Middle East cultural experience”) and Joseph, a Mediterranean-inspired bistro that is temporarily closed.

Among the most popular Levant-inspired dishes at Caju: Oriental snacks with Moroccan bread, Middle East beef kofta and, for dessert, halvah parfait (aka reinterpreted tiramisu). 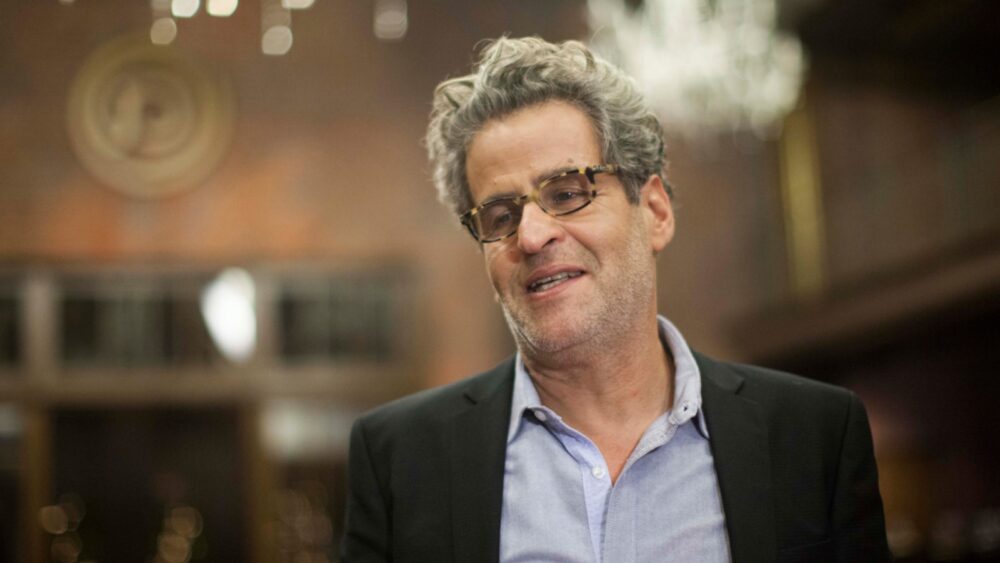 It’s hard to find a major city anywhere that doesn’t have a restaurant by “MasterChef Israel” judge Eyal Shani (on Instagram as @eyaltomato), whose signature roasted cauliflower has taken the culinary world by storm.

But 40 restaurants apparently isn’t enough for this Jerusalem native: He reportedly plans to open 150 more Miznon and/or HaSalon restaurants in Europe over the next five years, with his sights set on capital cities including Lisbon, Copenhagen and Madrid.

Shani told As Promised magazine: “Israeli cuisine is a Viennese schnitzel wrapped in Japanese seaweed and called sushi. It’s a cuisine in which nothing is sacred. It absorbs everything that happens outside and is influenced by it. In most cases very embarrassing things happen as a result. But, in the end, the fast and flexible environment created a spectacular cuisine, one of the best in the world, in my opinion.” 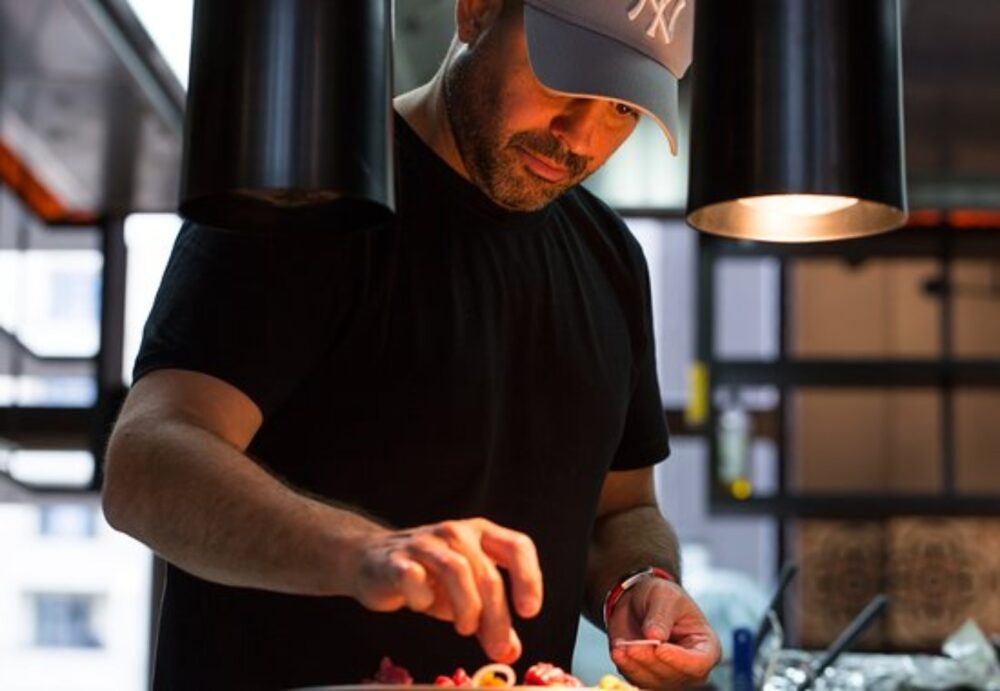 In addition to restaurants in Jerusalem, Tel Aviv and Ashkelon, Adoni established Nur in New York City, Layla in Berlin and Samna in Kyiv. He does a yearly Passover cooking stint in Greece and his next big venture will be in Singapore (and possibly in Dubai as well).

At Layla, Berliners can start their day with Jerusalem bagel with Paprika Aioli, crushed tomato, schug and olives.

“As a chef, the first thing I bring to the table is tradition. I respect the original flavors and ingredients. Only then do I add my crazy interpretation, launching the dish off to new and uncharted territory,” Adoni said. 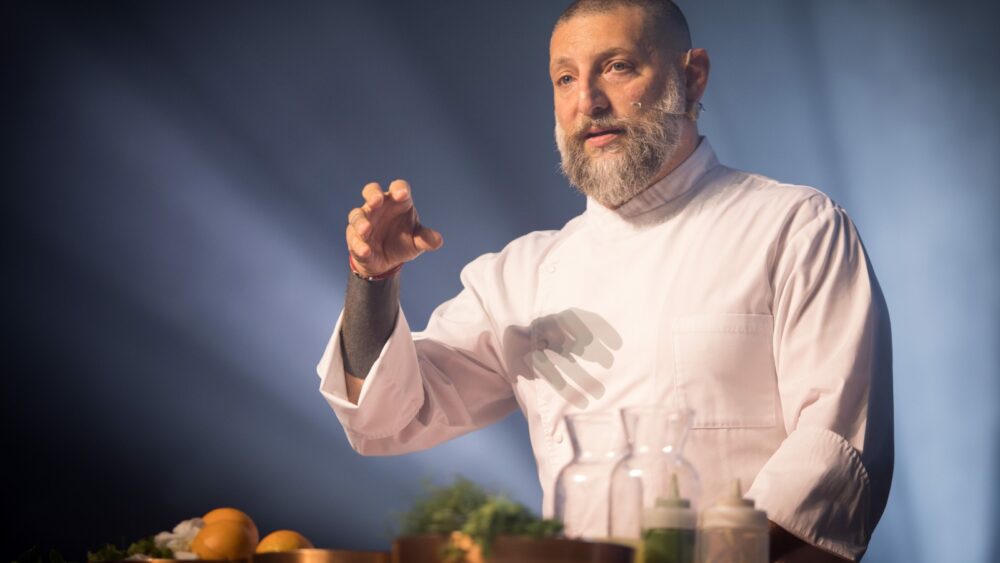 Israeli chef Assaf Granit speaks during a conference with science ministers from around the world in Jerusalem on May 2, 2018. Photo by Yonatan Sindel/Flash90

The group founded two other restaurants in London (Palomar and Barbary) as well as the Michelin starred Shabour and Balagan in Paris.

Back home, MachneYuda runs six eateries in Jerusalem, one in Tel Aviv and another in Tiberias. On top of all that, Granit is an Israeli TV personality (“Game of Chefs,” “Food Truck,” “Kitchen Nightmares”) and is a brand ambassador for, among others, Hublot Swiss watches. 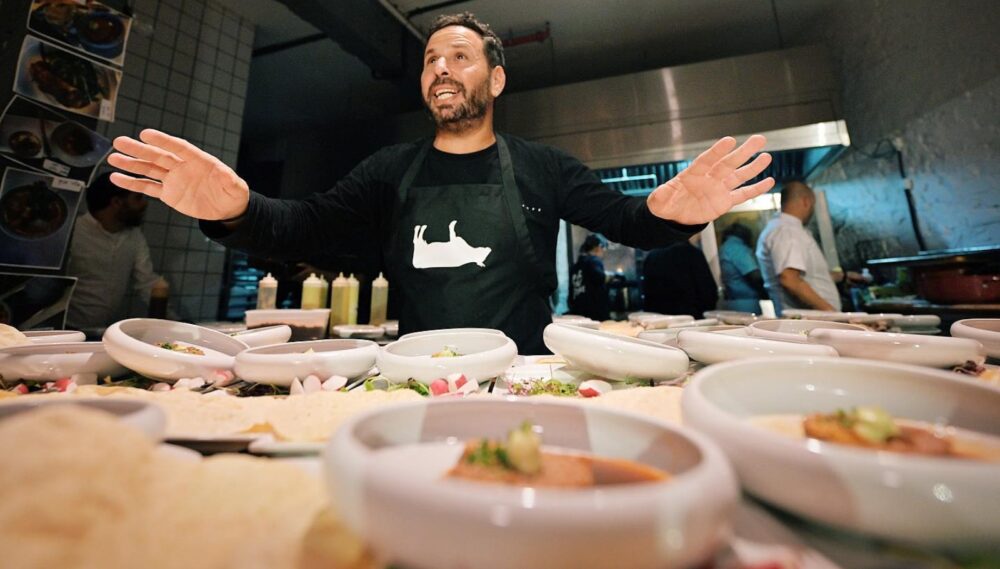 True to his nomadic reputation, Shahaf still seems to be everywhere at once. He’s currently the executive chef for El Al Israel Airlines and head chef at Mess in Shanghai, where he merges Middle Eastern, European and Asian cuisine in dishes such as “Shakshucurry.”