A row of binoculars and impressively long camera lenses are aimed at the lake where a white-throated kingfisher is diving for its next meal and a cormorant flies gracefully overhead.

Most of the group have been on the watch since 6am and seem satisfied with the day’s sightings of seven different bird species. In November this will increase dramatically when 500 million birds of at least 150 species from Europe migrate through Israel to Africa. 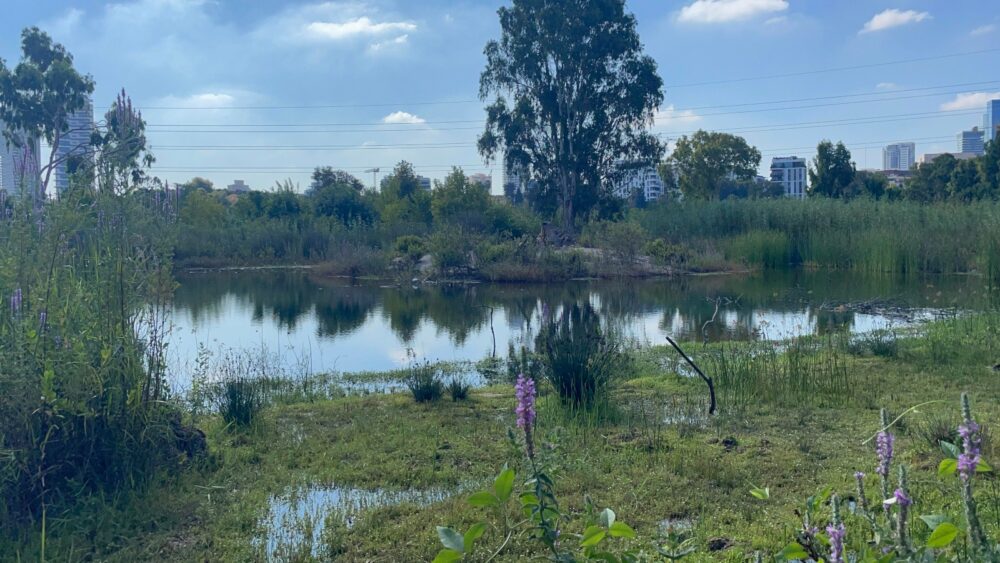 View of the birdwatching area at Rosh Tzipor. Photo by Natalie Selvin

The foremost aim of the Birdwatching Center in this 32-dunam (8-acre) forest, situated in Ganei Yehoshua Park, was to create a natural habitat for migratory birds so they can rest and get the nutrition they need to gather strength for the next leg of their flight.

Completed in 2018, this area of lush vegetation was until four years ago covered with orange groves that had completely destroyed the natural biosphere.

The secret to this ecological regeneration, says manager Liran Kaniel, “is that we concentrated on the needs of the birds and less on the human element. You can see pedestrian footpaths are kept to a minimum so that nature dominates. The three observation hides are discreetly placed so the birds are not disturbed while they feed and rest.” 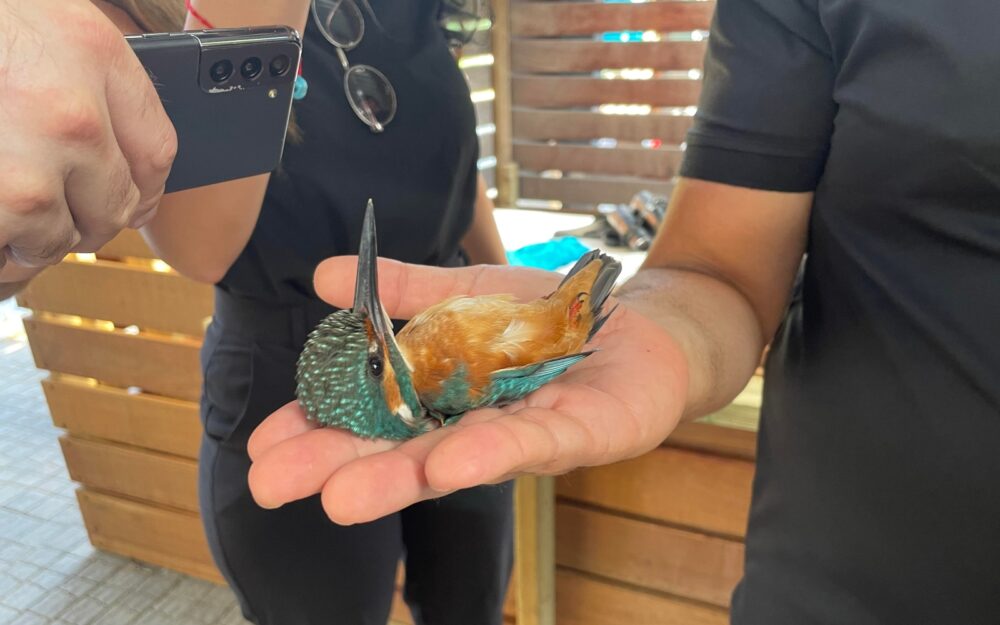 A kingfisher resting calmly in the palm of an ornithologist at Rosh Tzipor. Photo by Natalie Selvin

Kaniel, a landscape architect, says when he started on the project five years ago, he was meticulous in choosing trees and plants native to the area that can survive on rainwater alone.

One example is the rare red papyrus that lines the marshland and was obtained from Tel Aviv University’s Botanical Garden. 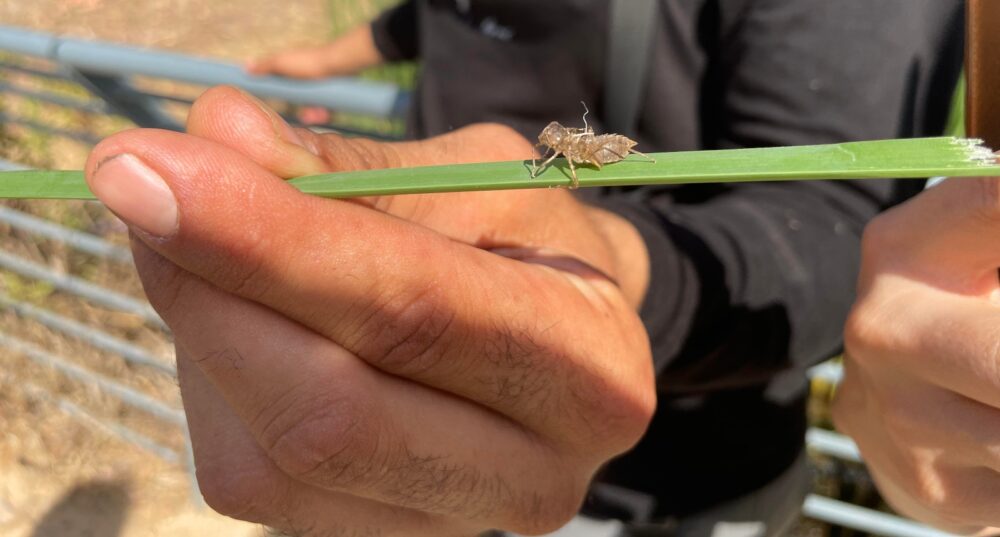 A dragonfly shell on a blade of tall marshland grass at Rosh Tzipor. Photo by Natalie Selvin

All the 10 dunams of water at the reserve are biofiltered with no addition of chemicals, Kaniel emphasizes, “and canals with step elevations were constructed to keep the water circulating and oxygenated.”

Rosh Tzipor is different from most birdwatching centers in Israel in that its backdrop is not a mountain range (the Hula Valley Nature Reserve below the Golan Heights) or the sea (Ma’agan Michael Birding Center on Carmel Beach), but the skyscrapers of Tel Aviv.

“It’s really a green oasis in the urban desert and you only need a small piece of land to achieve this,” says Yaron Charka, head ornithologist of Keren Kayemeth L’Israel-Jewish National Fund (KKL-JNF). He hopes to see neighboring cities replicating the example. 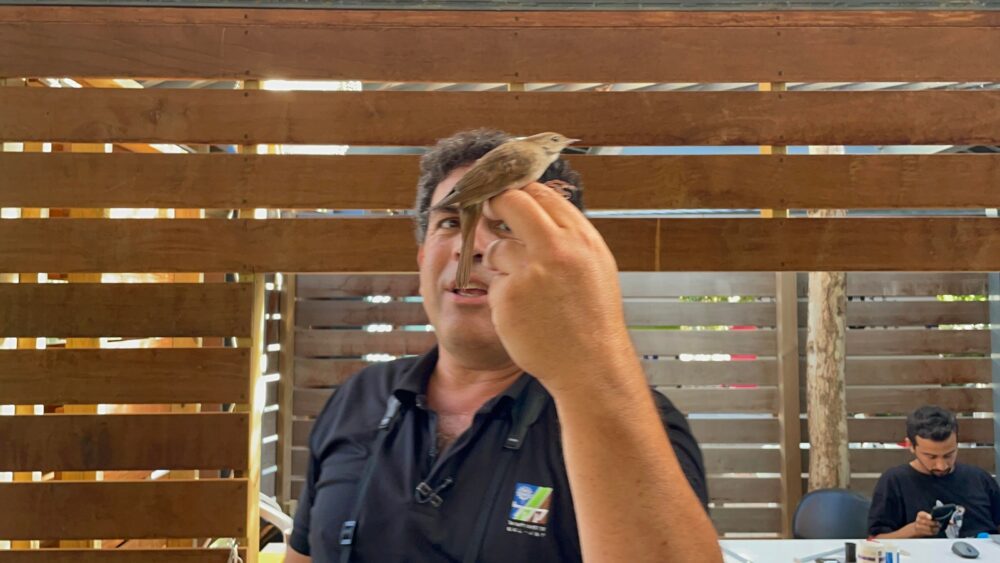 Yaron Charka, head ornithologist of KKL-JNF, with a bird at Rosh Tzipor. Photo by Natalie Selvin

Although the center may be small, it contributes also to the research of birds in Israel.

At its bird-banding station, small individually numbered metal tags are attached to the legs of birds to keep track of their life history and health, among other things. Started at the beginning of the 20th century, this monitoring technique is practiced only by licensed banders. The line on this bird’s tail feathers shows that there was a nutrient deficiency at some point. Photo by Natalie Selvin

Charka demonstrates the process to ISRAEL21c. The small birds about to get their tags are kept in soft net bags in which they were captured on poles set up in the forest.

The first bird to be taken out is a nightingale. Charka expertly holds it in two hands while a band is put gently on its leg and the serial number is entered into a data base. The bird is also weighed, its wing and tail length measured and the conditions of its feather molt noted before it is released.

Next to be studied is a grey willow warbler, a bird “not widely known as it hides in reeds. This one is around three months old and hatched perhaps in Scandinavia or Poland.”

All data collected goes into Israel’s central ornithological data base so that when a bird is recaptured here or abroad information on it can be accessed and updated worldwide. Banding equipment at Rosh Tzipor: each ring or cuff has an identification number and states that the bird was banded in Israel. Photo by Natalie Selvin

Charka says they receive communication at least once a week from abroad, most recently from Budapest, regarding a reed warbler that was tagged at Rosh Tzipor.

The connection of people to birds is also an objective at the center. It has a team of volunteers and receives a constant flow of visitors, including 7,000 school groups each year. 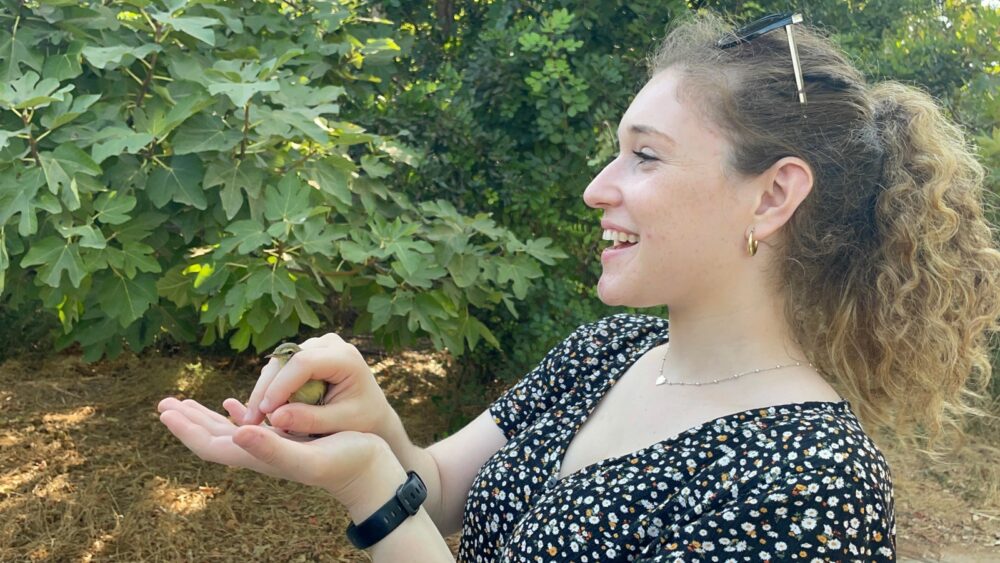 Natalie Selvin, ISRAEL21c social media coordinator, releasing a bird into the wild after it was banded at Rosh Tzipor. Photo courtesy of Natalie Selvin

Then there are the serious birdwatchers. Those in the observation hide today are not an organized group but there is an atmosphere of camaraderie.

“It’s my heaven,” says Amnon Loya, a professional tour guide, who comes all the way from the North to take photos of the golden jackal, which can be seen on the banks of the lake or even swimming in it. Amnon Loya, a tour guide, came from the North for three days to photograph the golden jackal. Photo by Natalie Selvin

Judith Goldfarb Yanos from Holon comes here at least three times a week. “I love this place as each season brings different bird life. Also it’s a calming atmosphere,” she says, showing the many impressive images she has taken today.

Charka, the ornithologist, is most moved by children’s wide-eyed reaction when he tells them about how willow warblers choose to fly alone and not in a flock on a journey of thousands of kilometers from Eastern Europe or Scandinavia to Africa.

“I hope they see this as an empowering message,” he says, adding with a smile, “I also tell them to say someone is stupid by calling them a ‘bird brain’ is very silly, because birds are the most incredible and capable species.”