“The sea squill blooms and the summer ends” – so goes an old folk saying across the Middle East and North Africa.

While it’s hard to imagine cooler temps while we are in the grip of a hot August here in Israel, the sea squill (Drimia aphylla) is now blooming gloriously across the land as a hopeful harbinger of autumn. 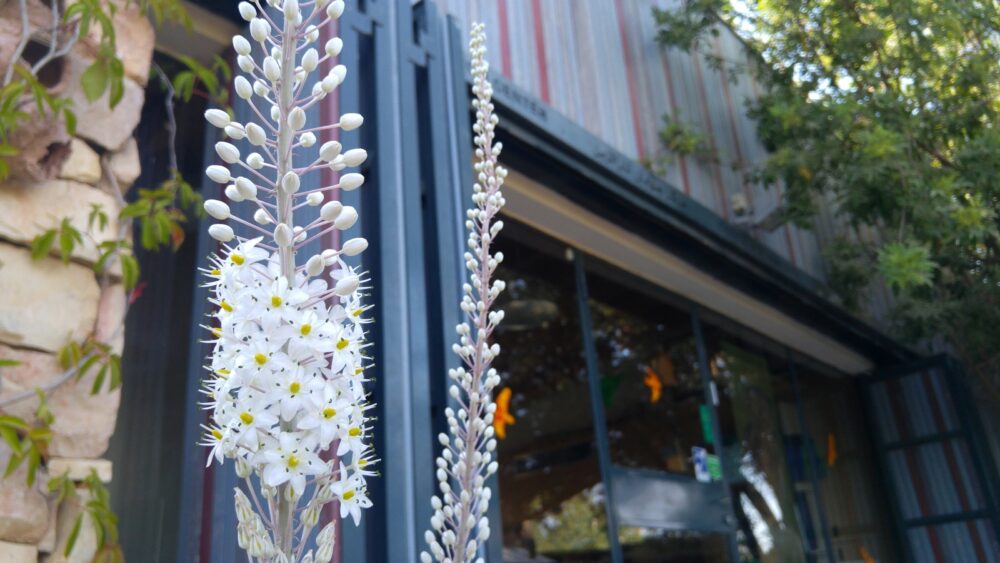 A sea squill blooming at the Bird Research Station in Jerusalem. Photo by Avner Rinot/SPNI

“It’s always surprising to see a beautiful, lush, tall flower in the harsh heat of summer so everyone is excited,” says Amir Balaban, director of Urban Nature Conservation for the Society for the Protection of Nature in Israel (SPNI).

“It’s a sign that we’ve passed the longest days of summer and autumn is on its way.”

Very common around the Mediterranean basin countries, this unique white wildflower is “one of most successful plants we have in arid areas,” he says.

“It collects water in a very large bulb underground during the winter and then, in the harsh dry summer season, it utilizes the energy from the sugars collected during wintertime,” Balaban explains. 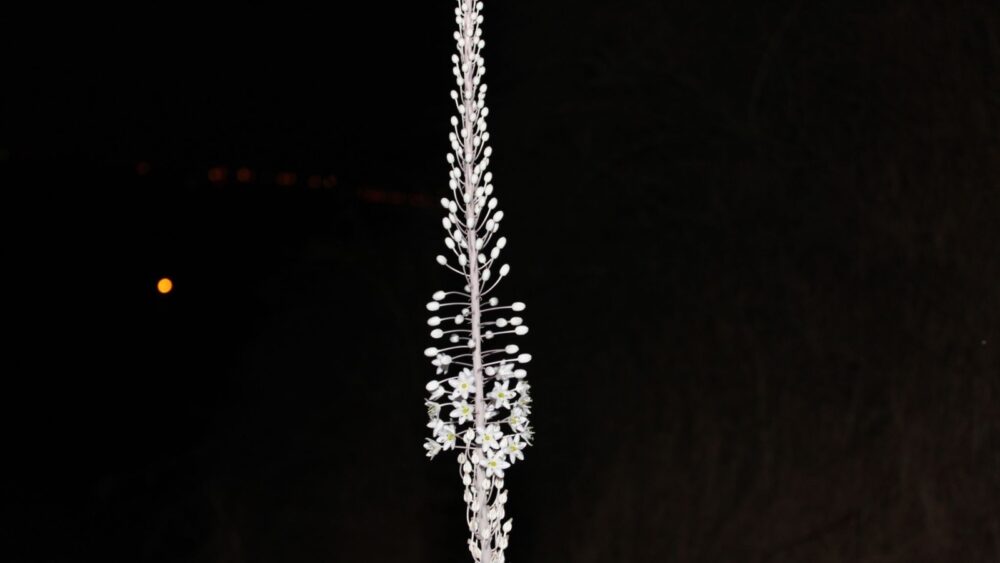 Sea squills get their first flowers at night. Photo by Rotem Bar/SPNI

Kicking off the annual flowering cycles in Israel well before the rainy season, the sea squill has an essential function in the circle of life across the region.

Balaban tells ISRAEL21c that because it blooms abundantly in many locations, the sea squill is like a vast 24/7 cafeteria for a whole range of pollinating insects. 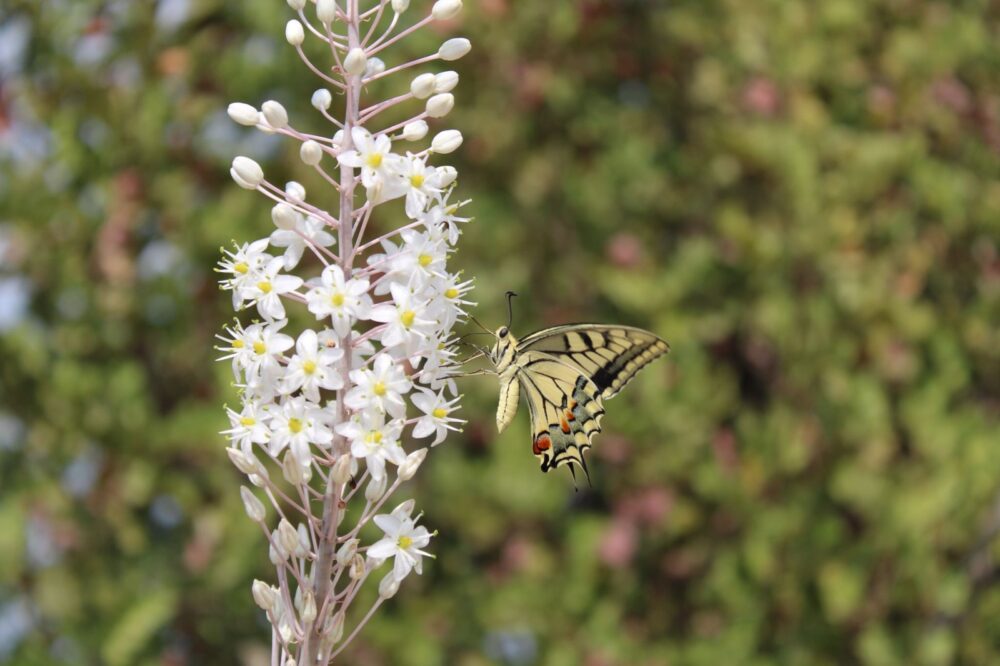 A butterfly pollinating a sea squill at an SPNI field school. Photo by Rotem Bar

The insects, in turn, provide an easily available feast for hungry birds.

The sea squill is related to the onion, which also collects and stores energy and uses what Balaban calls “chemical warfare” to protect itself from predators and microbes.

Just as onions causes your eyes to burn when you chop them, sea squill leaves contain burning needle-like crystals. 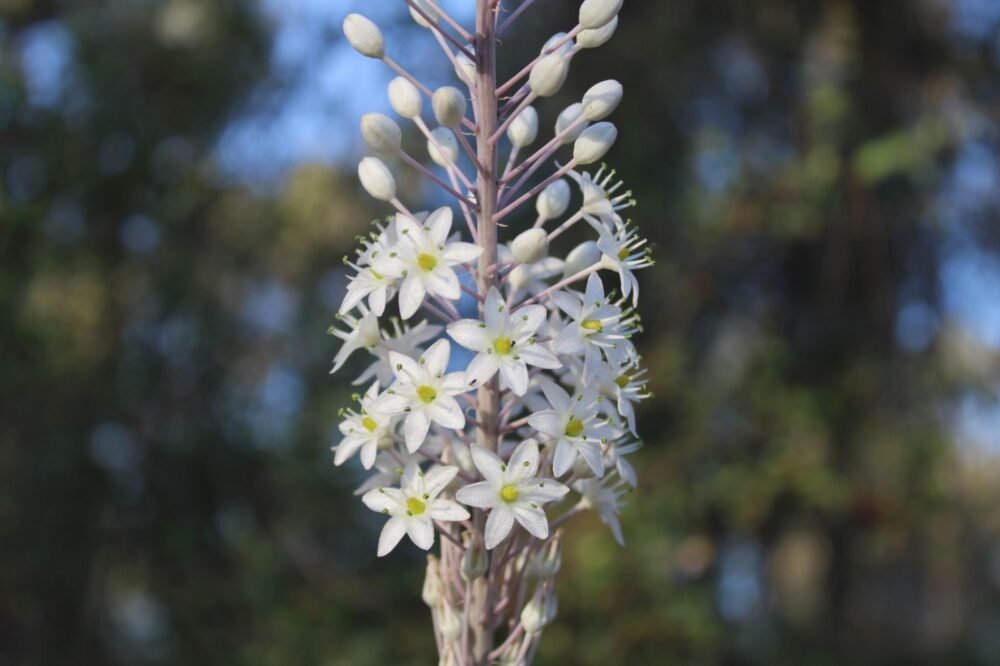 “The sea squill was often used to protect graves in cemeteries so that predators like wolves, jackals and hyenas wouldn’t dig up the corpses,” Balaban says.

It has also been used for millennia to mark property boundaries. The Talmud relates that biblical leader Joshua planted these flowers to delineate the boundaries of the Promised Land.

The Hebrew word for sea squill is chatzav, from the root meaning “to chisel” because this hardy flower chisels itself into rock.

“This plant has developed to survive extremes,” Balaban tells ISRAEL21c.

“Its strategy will probably be well adapted for climate change, at least for the foreseeable future. It can be fine in hot temperatures and be protected underground” from frost.

One of 2,000 sea squills on the “living rooftop” of the Jerusalem headquarters of the Jack, Joseph and Morton Mandel Foundation. Photo by Lior Levinger/Studio Urbanoff

SPNI is using the sea squill on its “living roof” systems designed to solve many climate and environmental challenges in urban areas. It planted 2,000 sea squill bulbs, for example, on the roof of the Jerusalem headquarters of the Jack, Joseph and Morton Mandel Foundation.

“We use the sea squill because it not only stores water but flowers at a time of year when nearly nothing flowers on these living roofs and it’s a beautiful feature. They have a slight scent and an amazingly long flowering stem that can reach a meter 80 [6 feet] tall,” says Balaban.