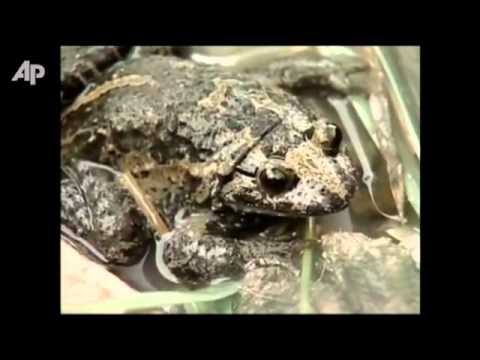 The Hula painted frog was considered a relic of history, until a vigilant park warden spotted the creature jumping back into existence. 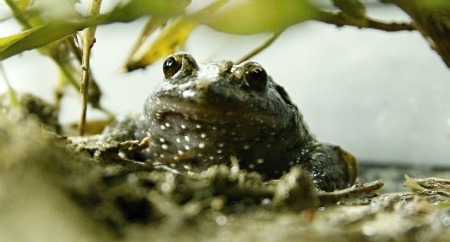 The Hula painted frog has hopped back to life in Israel.

It had been about 50 years since the painted frog special to Israel’s Hula Nature Reserve was last seen. By the mid-1990s an international authority had declared it extinct. Yet despite its obituary, Israeli animal conservationists and herpetologists never gave up hope.

Some of them, including researcher Sarig Gafni, believed the frog was in hiding and even went on scouting missions on their days off. Over the years, they looked under stones, combed through the reeds and carried their nets while on army reserve duty.

In November, their dreams came true when a small female Hula painted frog was spotted. An international media flurry ensued, bringing scientists from abroad on flights to Israel to see for themselves.

By mid-December, the tally was six frogs and counting.

Gafni, an ecologist at the Ruppin Academic Center School of Marine Sciences, joked to ISRAEL21c that he is the world’s record-holder for having handled the greatest number of the painted frog — all six of them. “All were found about 200 meters apart in a very limited area. We found three males, one female and two juveniles who are less than one year old.”

Sadly, he reports, one of the sextet had to be euthanized because it had been badly injured by a bird trying to eat it. It is now preserved for study in the new Garden for Zoological Research at Tel Aviv University.

Overall, however, the find is a victory for the frog, whose Latin name is Discoglossus nigriventer, and for animal conservationists everywhere, says Gafni. He drops everything and runs to the Hula Reserve, south of the Sea of Galilee, whenever a new frog is sighted.

“We assume they are from last year’s metamorphosis, and they were not tadpoles. The post-metamorphic frogs are about three centimeters long whereas the largest one — the world champion for the genus, and for the species, is about 85 millimeters long,” he says.

After they are caught, the frogs are carefully measured and sampled. They are each identified by size, length and weight, and the researchers take a picture of their side bellies to record their fingerprint-like patterns. 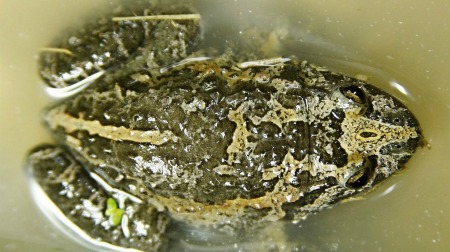 The markings of the frog are as unique as fingerprints.

“If they catch them they call me and I jump into my car and take measurements and pictures,” Gafni says. “I scratch off some of the skin, take some saliva, and remove some of the web between their fingers, an area which doesn’t contain blood vessels and which is a lot like cutting one’s nails. Every step is done with a lot of care because every change can harm the population.”

The samples are used for preserving the DNA and for running tests to understand the genetic lineage and evolutionary standing of the frogs, about which little is known.

“The first step will be to study more about it: Where it lives. Where it breeds. How long it takes for tadpoles to develop. How fast they grow. How many eggs you get in every cycle. How many times they reproduce. Nothing is known. Throughout history, only nine were ever found and described, and all were in the Hula Valley,” Gafni says.

One theory is that the frog species originated in the Gibraltar region and migrated to Israel as a colonizer. Similar, but not identical, species today are found in Morocco and Spain.

An argument for rehabilitating nature 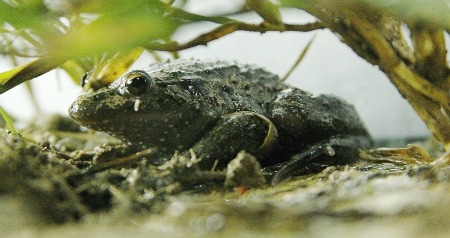 So far, six frogs have been found.

“Actually it was discovered two years ago, and no one knew it was discovered yet,” says Gafni. “It was by a tourist who took a picture and who sent it to us only recently. People have looked for it since it has disappeared for 50 years, even more. In 2005 a special group was sent to look for it in Lebanon. They found nothing.”

Yehoshua Shkedy, chief scientist at the Israel Nature & Parks Authority (INPA), tells ISRAEL21c that this was the first time he has added an “extinct” animal to Israel’s Red Book of Endangered Animals.

It seems that conservation efforts are to thank for the frog’s reappearance. “Following an improvement in the water quality in the Hula Valley, the population increased and as new habitat became available the chances to see them increased,” Gafni surmises. “By giving better resources to the nature reserve you can get positive results.”

The Hula swamp was drained by 1950s pioneers because it harbored pestilence and disease. After it was drained and doused with DDT, at least three species of animals indigenous to Israel, the frog included, went missing. Malaria was eradicated in Israel, but the painful price was losing an important habitat for amphibians, fish and other wildlife, most notably millions of migratory birds that stopped by twice annually for rest and refreshment.

INPA rehabilitated the swamp by diverting water back to it through a series of dams and pipes. Today, freshwater input has revitalized the fragile ecosystem. Under the vigilant eye of park wardens, the Hula has become a birdwatcher’s paradise with ramps and access tracks built throughout the reeds for watching the wildlife without disturbing them.