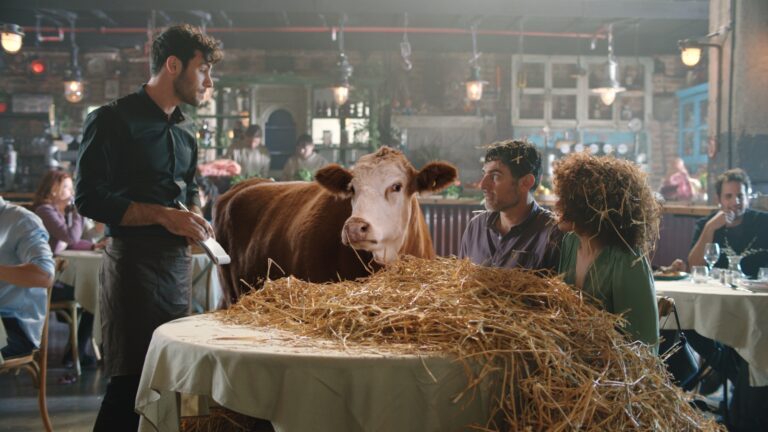 A screenshot from Vegan Friendly’s “Hell of a Steak” international ad campaign.

After 10 years of improving Israelis’ access to plant-based food and raising public awareness about factory farming — and two years after branching out to the United Kingdom — Vegan Friendly is planting its first seeds in the United States.

“The problem of factory farming is global,” notes Vegan Friendly founder Omri Paz. “Our campaigns got the attention of international organizations and donors and they pleaded with us to expand to other countries.”

In Israel, 8,000 vegan food products and some 2,000 restaurants, hotels and other businesses carry the purple Vegan Friendly seal certifying that they meet strict criteria for plant-based options (a steakhouse that sells French fries wouldn’t qualify). Certified brands and businesses are promoted to the organization’s 220,000 social-media followers.

In the UK, the Vegan Friendly seal appears on 2,000 products and 1,200 branches of 500 businesses. The organization so far has 150,000 British followers on social media.

The other income-generating model that Vegan Friendly innovated is the Vegan Active club, whose members pledge a monthly donation toward the billboard or TV ad campaign of their choice. Currently, about 6,000 Israeli members contribute a combined $75,000 each month. In return, they receive discounts at Vegan Friendly certified businesses.

The first US Vegan Friendly branch is launching in New York City with a team of five social-media specialists and project managers. Unlike most Israeli nonprofits with a US presence, this isn’t just a fundraising arm.

“We always thought it would be impactful to be in the United States, working with the world’s biggest corporations, donors and celebrities. But we waited until we had a successful proof of concept in the UK before taking the big leap from Israel to the US,” Paz tells ISRAEL21c.

Meanwhile, live events are back this year — about 100,000 people are expected at Vegan Friendly’s next Vegan Fest, June 7-9 in Tel Aviv’s Sarona Market complex.

On the awareness front, Vegan Friendly’s newest ad campaign, “Hell of a Steak,” highlights the environmental price of raising beef cattle – a topic that Paz noticed was absent from the agenda (and the meat-intensive menu) at the UN Climate Change Conference last October.

Here’s the English version that recently aired in the UK and will be seen on prime-time television in the US next month. (The cow that stars in this ad was saved from a factory farm and lives happily at Israel’s Freedom Farm Sanctuary.)

UNCOVER ISRAEL - Get the ISRAEL21c
Weekly Edition free by email
Sign Up Now!
Bring Israel's story to life.
Millions of people around the world rely on us to gain a deeper understanding of Israel. We are the trusted source for original content you won't find anywhere else.
You can make a difference. Donate today to support journalism that brings Israel’s story alive.
SUPPORT ISRAEL21c
Read more on:   News, Environment, Social Action, vegan