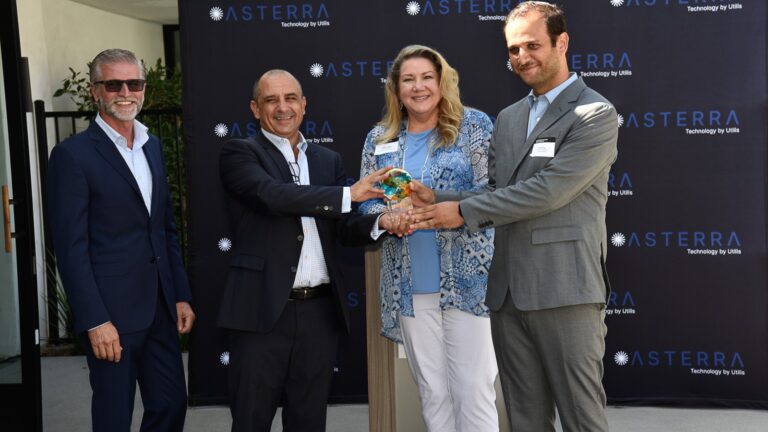 The AWWA is an international scientific and educational society founded in 1881 to provide solutions for effective management of water. It is the largest organization of water supply professionals in the world.

Since 2016, Utilis technology used in multiple verticals around the globe has resulted in saving more than 9,000 million gallons of potable water and 22,000 MWH of energy per year, in support of United Nations Sustainable Development Goals. An average of 3.3 leaks are found per day at each subscribing utility.

The Asterra division is headquartered in Israel with offices in the United States and United Kingdom. CEO Elly Perets said the company has expanded from leak detection to data provision for the greater infrastructure industry.

AWWA Vice President Heather Collins presented the award at a reception in California attended by state and federal officials. Members of the San Diego Chamber of Commerce, including former Mayor Jerry Sanders, joined Asterra leaders from the United States and Israel for a ribbon-cutting of Asterra’s local office.

In June, Utilis/Asterra cofounder and CTO Lauren Guy was named one of 50 rising stars by Geospatial World.

UNCOVER ISRAEL - Get the ISRAEL21c
Weekly Edition free by email
Sign Up Now!
Bring Israel's story to life.
Millions of people around the world rely on us to gain a deeper understanding of Israel. We are the trusted source for original content you won't find anywhere else.
You can make a difference. Donate today to support journalism that brings Israel’s story alive.
SUPPORT ISRAEL21c
Read more on:   News, Utilis, Asterra, water technology, Environment