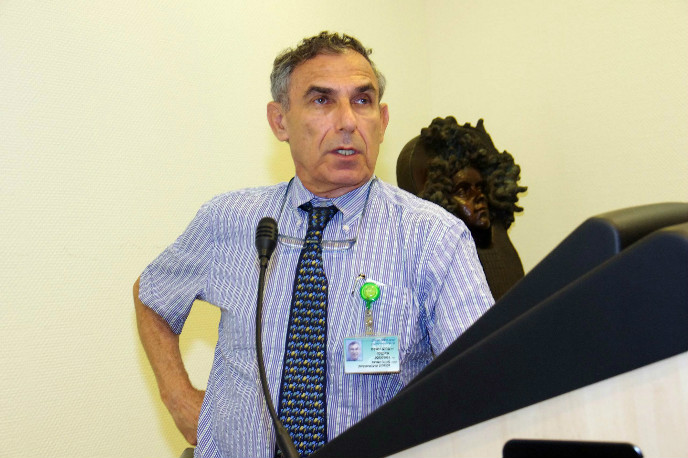 It is common to make fun of men for acting like “big babies” when they’re even mildly sick. According to Dr. Yehuda Shoenfeld, who heads the Shlomo and Pola Zabludowicz Center of Autoimmune Diseases (eng.sheba.co.il/567/329.htm) in the Sheba Medical Center at Tel Hashomer, there is a physiological basis for this behavior.

Indeed, says the world-renowned Israeli autoimmunologist, prolific author and founder and editor of the Israel Medical Association Journal, Autoimmunity Reviews and J Autoimmunity: “Women are literally the stronger gender, with a better immune system. Not only do they outlive men, but when a woman has a cold, she goes about her business, and when a man has one, he takes to his bed and cries for a cup of tea.”

But this stronger immune system is also why, explains Shoenfeld, “with a few exceptions, autoimmune diseases attack women more than men, and usually at childbearing ages.”

As he gives ISRAEL21c a guided tour of the 3,000-meter (nearly 33,000-foot) center, decorated by Israeli artists and sculptors, Shoenfeld delivers a fluid summary of autoimmune diseases and the breakthroughs being made on the premises.

There are 80 such diseases, afflicting an estimated 20 percent of the population. Among these are the ones most people have heard of — rheumatoid arthritis, multiple sclerosis, type 1 diabetes, Crohn’s disease and lupus. All are characterized by an immune system gone amok.

“Instead of doing its work to prevent outside invaders, such as bacteria and viruses, from attacking our body, it turns inward and becomes the attacker,” says Shoenfeld, likening the process to “friendly fire” in the military.

“If it attacks the brain, for instance, the patient suffers from multiple sclerosis; if it attacks the intestine, it is Crohn’s disease. When it attacks many different organs and tissues, it is considered ‘systemic.’ Lupus is an example of a systemic autoimmune disease.”

The innovation of the Zabludowicz Center is its holistic approach to researching, diagnosing, treating and finding cures for autoimmune diseases. It has brought together experts in every field of medicine (such as internists, immunologists, neurologists and gynecologists) to tackle what Shoenfeld and his colleagues call the “mosaic” of autoimmune diseases, which are always debilitating and sometimes fatal.

“Until recently, most of these diseases were diagnosed and treated by the individual organ specialists,” says Shoenfeld. “Over the last decade, we found that the causes of autoimmune diseases are the same, and that they include genetics, hormones and environmental factors such as the sun, pesticides and smoking.”

Through the work of more than 25 physicians and a research laboratory, the center has made strides beyond the first revolution in the treatment of autoimmune diseases — using biological drugs known as corticosteroids (such as prednisone) and immuno-suppressants. Shoenfeld describes both as “miraculous,” yet they cause multiple serious side effects and are very expensive.

Shoenfeld and his team studied regions of the world where there is a low incidence of autoimmune disease, and came up with the idea of “harnessing nature” in the form of helminth intestinal parasites – something that modern hygiene has largely eliminated.

In order to survive and thrive, helminths secret substances that suppress the host’s immune system.

He relates that the Italian island of Sardinia was rife with malaria yet absent of autoimmune disease – until 1946, when the area was sprayed with DDT. Malaria was indeed curbed as a result, but the island’s population developed the highest incidence of multiple sclerosis in the world.

Hygiene theorists tried using helminths to treat autoimmune disease, having their subjects ingest the long parasites like spaghetti. The experiments were successful but “a bit disgusting,” says Shoenfeld. “So the next trial was to ingest helminth eggs — which are so tiny that they can’t be seen by the naked eye — and let them hatch in the patient.”

The problem is that the parasites are emitted in bodily waste, causing a public-health issue. The solution was to use the eggs of a pig helminth, which do not hatch in humans, or if they do, they die very quickly.

This method, approved by medical authorities, is currently sold over the counter via the Internet. And many patients who have tried it report beneficial effects.

Taking this a step farther, Shoenfeld and his team set out to mimic the helminth secretions that suppress a host’s immune system. The compound they patented, called TCP, is the basis of a startup they have established. They are seeking investors or pharmaceutical companies to mass produce the compound.

TCP is a mixture of two existing molecules in the body – phosphorylcholine, a non-immunogenic substance, and tuftsin, which is produced in the spleen and helps suppress the immune system. When introduced to mice in the lab at the center, via injection and orally, TCP completely eradicated lupus, colitis and rheumatoid arthritis.

Shoenfeld’s team is now expanding experimentation with TCP – which he believes can relieve almost all autoimmune diseases cheaply and without side effects — to tackle conditions such as hair loss and psoriasis. They are also starting a study on the connection between allergies and autoimmune disease.

“We believe that investors in this endeavor will get very rich,” he concludes.