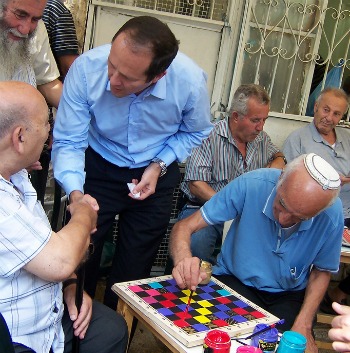 Photo by Abigail Klein Leichman
Mayor Nir Barkat gets ready to paint a backgammon board.

Next time you walk through Jerusalem’s Machane Yehuda open-air marketplace, you’ll notice much more than the sights, smells and sounds of commerce in this dynamic “souk.” Now there is also a variety of urban artworks decorating the trash bins, stone walls and concrete surfaces of the downtown marketplace.

Street artist Itamar Paloge was chosen as the curator for this city-sponsored project, dubbed Tabula Rasa (Blank Slate). “I took part in previous projects to ‘color up’ neglected parts of the city, and this time I got to guide the project,” he tells ISRAEL21c. “My goal is that I just want the streets to be colorful, alive and full of art.”

Paloge recruited about 30 participants from the Bezalel, Hadassah and Musrara schools of art and photography in Jerusalem as well as locally known painters, sculptors, photographers, graphic artists and street artists. 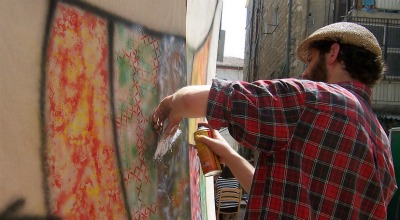 Photo by Abigail Klein Leichman
Yehuda Braun works on his map of the souk.

Some of the vendors joined in the fun as well, stealing a few creative moments from hawking the diverse wares of the souk — fresh produce, meat, cheese, fish, baked goods and spices, housewares, Judaica and ethnic apparel.

“[Tabula Rasa] is a joint venture between the merchants, the Student Union and the municipality,” Jerusalem Mayor Nir Barkat explained to reporters and well-wishers last month as he toured the works in progress through the alleys of the Iraqi section of the bustling bazaar.

The mayor even took a paintbrush in hand to help decorate a tabletop backgammon board where old-timers while away the hours in friendly competition. And he helped Canadian-born Yehuda Braun spray-paint a section of his giant wood-backed map of the market.

“I enjoy working with people, making art accessible to people who don’t usually find themselves in art galleries,” says Braun. His finished map will be mounted permanently in an area of the market. 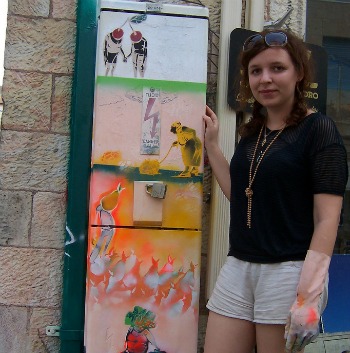 Photo by Abigail Klein Leichman
Alina Goldberg with her veggie-heads.

Goldberg got the notion for these works when she was living in Jerusalem’s Old City, and playfully took photos of her roommate holding veggies on top of her head. Looking at the pictures, she had a visual revelation: “Some of the vendors in the souk actually look like the vegetables they sell,” she says with a laugh.

Paloge says Tabula Rasa isn’t just short-term decor. “Everything being created here is permanent — it will last as long as the streets themselves are here,” he says.

The marketplace is ‘a joy’

That will probably be a very long time, if history is any indication of the future. Machane Yehuda (literally, the Camp of Judah), the largest and busiest outdoor market in Israel, anchors a neighborhood of the same name established in 1887 by a bank manager, a metal worker and a railway worker. The latter named it after his recently deceased brother Yehuda. The souk opened in 1928 and soon became a magnet for locals and tourists because of its prices and variety, and also for the sheer experience of its lively open-air atmosphere.

Machane Yehuda, said Barkat, “is part of the public space of the city — a very unique place, and people love to come here.” Any day of the week, one can find Jews and Arabs bargain-hunting side by side in the crowded lanes, some of which are now covered with awnings to keep sun and rain at bay. 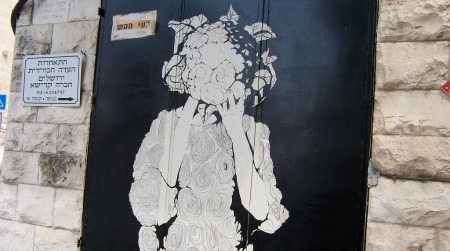 In recent years, the venerable but slightly shabby marketplace has seen trendy shops and cafés popping up among its multigenerational retail stalls. Flooring tiles have started replacing worn and uneven paving stones. The brand-new Jerusalem Light Rail stops along one side of the blocks-long souk while several bus lines feed the other.

On Monday nights in July, the Balabasta Festival livens up the alleys of the souk with an eclectic mix of unusual temporary sculptures, jugglers, clowns, Capoeira and waltzing as bands play music on the cobblestones and rooftops.

Barkat says the new urban art initiative “adds spirit to the changes that are happening here,” calling the renewed marketplace “a joy.”