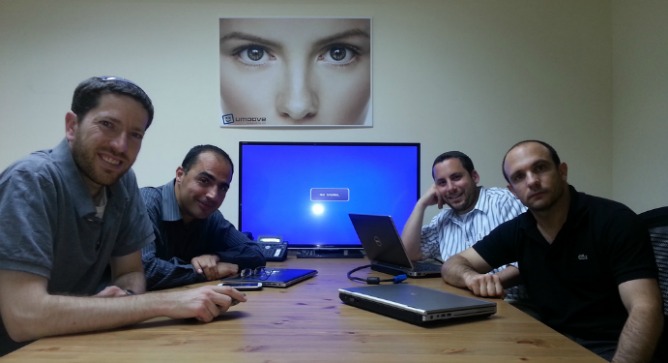 What the Kinect motion-sensing device did for the Xbox game console, Israeli startup Umoove proposes to do for your mobile. You won’t have to move your whole body – only the parts from the chin up — to play games, scroll down a page or dial your mother.

“Kinect holds a Guinness record for being the fastest-selling consumer electronics device because it was much more immersive and engaging than other ways to play,” says Moti Krispil, one of the company’s founders.

“We are following that paradigm in the mobile space, where the only thing visible is your head and eyes. You are constantly looking at the screen, so why shouldn’t they become the interface?”

Krispil, 34, co-founded Umoove in 2010 along with Yitzi Kempinski, Nir Blaustein and Tuvia Elbaum, who is still a student at the Jerusalem College of Technology-Machon Lev. Based in Jerusalem; the company now employs 13, including four additional Machon Lev students or graduates.

Newsgeek chose Umoove as one of the three most promising Israeli startups for 2013.

“Many companies are trying to decipher the DNA of how to do this, but most probably we are the first to achieve consumer-grade performance using no special hardware at all, just your phone,” Krispil tells ISRAEL21c.

“Everyone wants to deliver something robust enough to work, and that can be scaled down to performance on a mobile phone. That’s the reason for our existence.”

Aiming to be disruptive

Whereas Kinect’s sophisticated hardware setup — built on the 3D sensing technology of the Israeli company PrimeSense – has the operational advantage of being fixed below the TV or PC, that also limits its distance-to-user range. A mobile device offers different possibilities and challenges.

“My Samsung Galaxy has one basic camera, a CPU with maybe one-fifth [the memory] of a traditional PC or notebook, and yet amazingly you can use it while in motion,” says Krispil. “The device is constantly shaking, and the perspective and distance changes all the time as you use it. A solution like ours is more dynamic than Kinect, and must constantly operate on the go.”

Umoove is based on technology pioneered by Kempinski, now CTO of the company. Originally searching for an affordable solution to allow paralyzed people to read content or browse the Web using only their face muscles, Kempinski found that existing technologies failed to deliver under extreme conditions — aside from pricey setups involving multiple hardware devices.

“So he built an intelligent solution from scratch that contradicts any known algorithm out there,” says Krispil. “Once we delved into this challenge, we discovered what we want is much, much bigger; extremely disruptive in potential.”

The head-tracking technology is already being integrated on some games and is available to third-party partners and developers for gaming, commerce, security and entertainment on all mobile platforms.

“We are trying to operate below the radar, waiting for the first big transaction to leverage the product,” says Krispil, who recently demonstrated Umoove at the Mobile World Congress in Barcelona and is in talks with potential corporate prospects.

“It’s easy to show customers how the quality of life of a typical user can dramatically improve when browsing the Web, watching a video, playing a game. Head and eye tracking simplifies everyday tasks — not just games and not just for people with disabilities. Daily functionality becomes hands-free.”

Imagine a video player that automatically pauses when you raise your head to look at someone calling you, and then continues playing when you look back at the screen.

“Once you get used to the concept, it becomes a language to use in many other places,” says Krispil, whose four-year-old daughter uses Umoove to play game apps as she’s moving from room to room and even outdoors.

“The application possibilities are endless,” says Krispil. “Our strategy is driven by the vision to be the de facto standard for natural user interface on mobile devices. We’re not just delivering technology, but actually suggesting a new language.”