Anybody can plunk down some potted trees and pretty planters on a roof, but a rooftop garden does not offer the same environmental and ecological benefits as a “green roof” – a layer of low-maintenance vegetation that insulates the building underneath and reduces flash flooding on paved streets below by acting as a sponge for rainfall.

Prof. Leon Blaustein, director of the University of Haifa’s new Green Roofs Ecology Center, says the Israeli center is the first of its kind in the Middle East and one of the first worldwide to focus specifically on how to conserve biodiversity in an urban setting.

“When you create a city, you’re destroying much of the natural habitat for plants and animals, and we want to mitigate this as much as possible with our rooftop habitats,” Blaustein tells ISRAEL21c.

Blaustein and his team have installed 48 experimental modules on top of the university’s Student Union, each with a different growing material, drainage configuration and plant grouping.

Ecology researchers around the world will be watching as the Israelis monitor how well each of the modules thrives and attracts insects, birds and other fauna, in the hope of determining the most successful recipe for developing biodiverse green roofs in arid climates.

Eventually, they hope to create experimental green roof plots on additional buildings on the campus and around the city of Haifa, as well as other Israeli cities.

The Green Roofs Ecology Center will provide an unusual outdoor laboratory for ecology and evolutionary biology researchers from around the world to develop and test ecological theories, says Blaustein, who heads the university’s Community Ecology Laboratory. 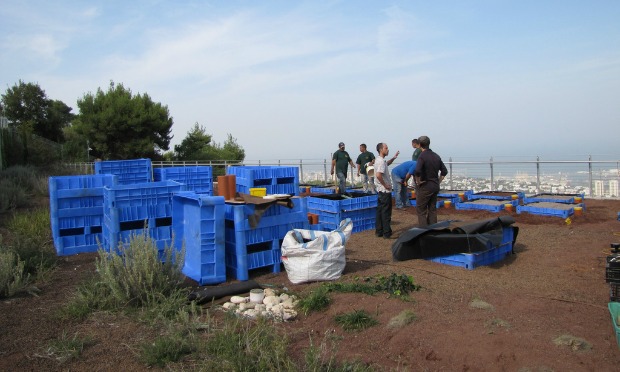 The Israeli team is studying how to conserve plant and insect species in an urban setting.

“We’re just getting started. We are looking for collaborators outside the university, such as government and NGO officials,” says Blaustein, who has lately been in touch with interested scientists from Switzerland and the United States.

Doctoral candidate Amiel Vasl is in charge of the experiment on the Student Union building, while master’s degree candidate Ariel Solodar will be testing the feasibility of using “gray water” coming from the building’s sinks to irrigate the plants and purify the water.

Blaustein explains that the growing substrate and foliage on green roofs keep buildings insulated from heat and cold so there is less need to use energy for keeping the interior at a comfortable temperature. And by soaking up rain before it hits the non-absorbent asphalt or concrete below, green roofs can prevent flash flooding in urban environments.

The center was inaugurated in October with the backing of an international advisory board that includes, among others, eco-architect Ayal Ronen from Bezalel Academy of Art and Design in Jerusalem; Rakefet Sinai, an architect affiliated with the Technion-Israel Institute of Technology; and Howard Wenger, California-based president of SunPower and various gardening companies.