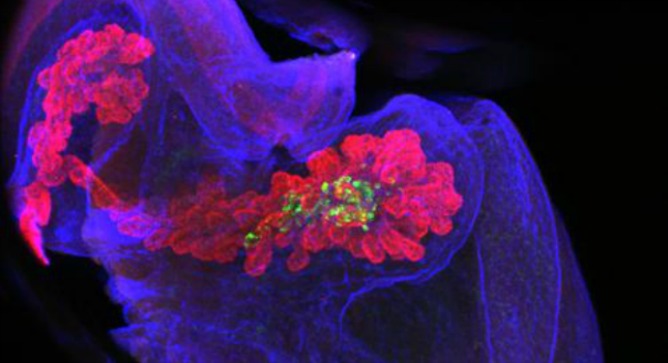 Insulin is made in the islet cells of the pancreas (highlighted). Image courtesy of Yuval Dor/Hebrew University-Hadassah Medical School.

Alpha-1, a natural blood protein that fights inflammation, protects transplanted animal pancreatic islets – where insulin is produced – from rejection by the human body when used in combination with another anti-rejection therapy, according to an Israeli study financed by the Juvenile Diabetes Research Foundation.

This discovery, reported in the journal PLoS ONE in May, could open the door to successful islet transplants from mammals, such as pigs, for Type 1 diabetes patients.

Type 1 diabetes affects an estimated three million people in the United States alone. The disease results from a problem with the production or distribution of the hormone insulin, which carries glucose to the body’s cells for energy. Insulin is made in the islet cells of the pancreas, and transplants of healthy human islets have successfully allowed recipients to stop using injected insulin on a daily basis.

However, because there aren’t nearly enough human donors, regulatory agencies including the US Food and Drug Administration have approved clinical trials using islets from pigs. Here, the problem is not availability but the human body’s aggressive immune response against tissue from another species.

This is why the study by Ben-Gurion University of the Negev scientists Eli C. Lewis, Efrat Ashkenazi, Boris M. Baranovski and Galit Shahaf is so significant.

Combination therapy is the charm

Lewis and his team at the Clinical Islet Laboratory in the department of clinical biochemistry and pharmacology already showed that alpha-1 protects human islet grafts from rejection by the recipient’s body. Next, they tested its effectiveness in protecting against rejection of non-human transplants. But their attempts failed, even when they tried increasing the dosage of alpha-1.

Not willing to give up, the Israeli team studied microscopic changes inside graft samples and determined that alpha-1 might simply need help in order to overcome the strong immune response to inter-species grafts. This approach is called combination therapy.

“This approach may be applicable in the near future for the purpose of pig-to-human islet transplantation, a procedure currently examined in several clinical trials around the world,” said Lewis.